And they do NOT seem to get any less in volume!!!  Like HOW??

Today I made the last two of my Whirling Star blocks for the RSC 2016 at So Scrappy.  It's been a fun year and one in which I really played, not on purpose, mind you, with value and gradation in colour families.  So here are my last two blocks for the year for project #1: 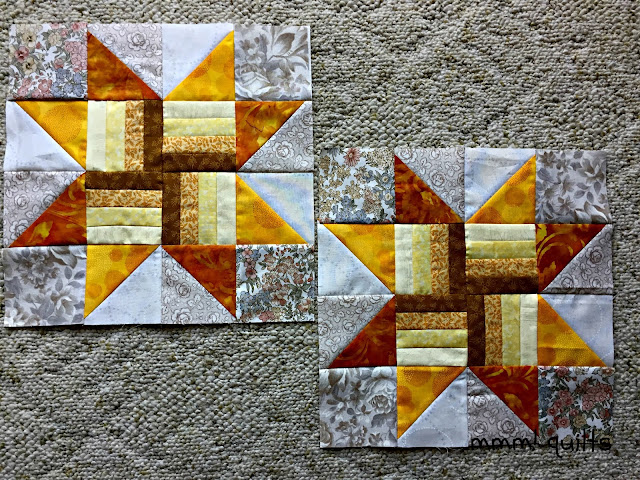 Yellow with a bit of orange was Angela's directive.  I had the perfect scraps of batik for one set of star points and the yellow with orange dotted spots was from a fat quarter stack I was given from Benartex for promoting their Modern By the Yard magazine, which btw, has another new edition coming out Monday! I thought the star point fabrics I used were absolutely perfect for what Angela had us working with for the month.

I thought I'd show you my process by which I arrived at those two blocks before I show you the layout on my design wall of all 20 blocks.

Along the way of making these blocks, I realized two things: 1) right away I saw I could spin the centre four blocks from light to dark or dark to light, and 2) a couple months in, I realized that I could spin the centres in two directions.  That, I discovered by accident.  There are 3 blocks, well 6, because I have two of each colour, that spin in one direction, and 7 (14 in total) that spin the other direction.  The photo below shows you exactly what I mean: 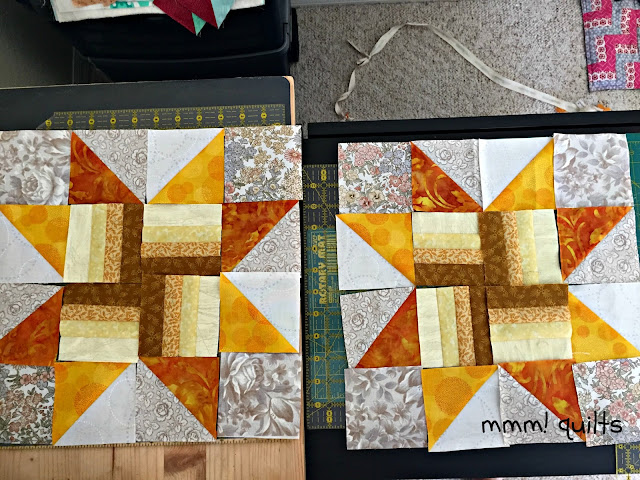 I was pretty sure I wanted the dark gold in the centre, but I did rotate the four blocks to see what a light centre would look like: 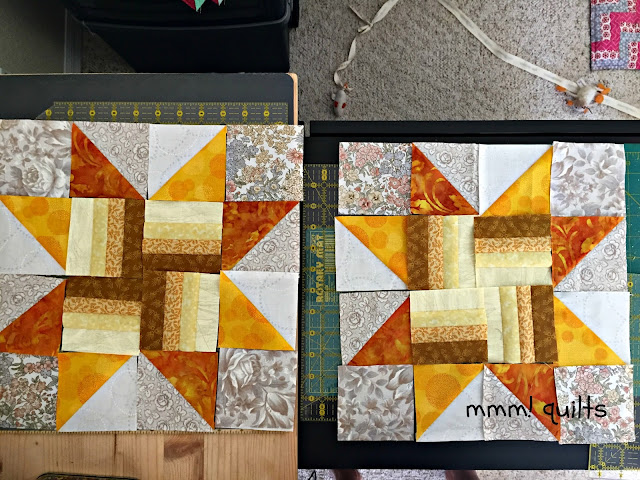 For this block, I also flipped the star points around just to see if it made much of a difference as to whether the more saturated HST or the brighter HST was beside the lightest of the yellows in the centre 'whirl'. 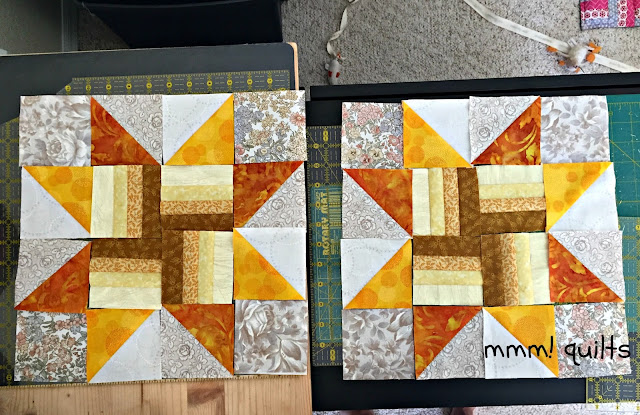 As you can see the block on the left is the way I ended up piecing them both.

I put them on the design wall in ROYGBIV order.  It was tricky because I had a grey star with a bit of acid green hints, and a brown with pink hints...where do those fit in?  Brown is a mixture of all colours, no?  And grey is a whited out black, in other words, a tint, just as pink is a tint of red, which is why I put the pink in front of the red star. 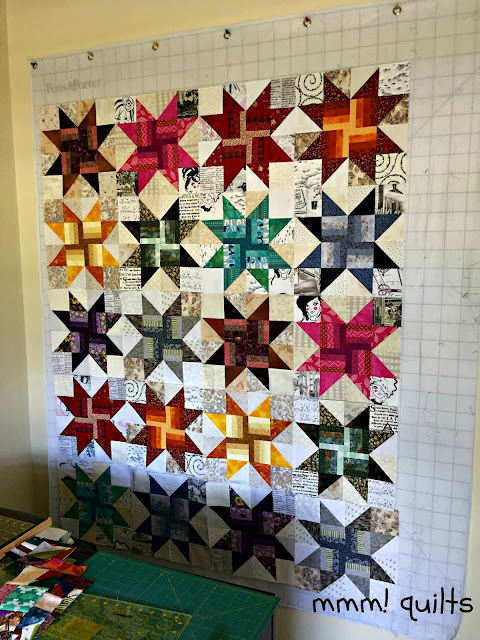 In the end, or at least as it stands right at the moment, I put the brown with pink highlights beside the pink star.
What do you think?  Part of me wants to separate the blocks with lattice, but a bigger part of me says nope, enjoy the scrappiness (and the less work, lol), and the modern feel to it.  In this layout, it will finish at 48.5X60.5"

Over the weekend I put in some time on my Scrap Vortex.  I've been picking away at it mainly as a leader/ender all year.  It finally seems to be getting to the slab stage.  Here are the most recent slabs I created from smaller pairs and foursies and what-have-yous: 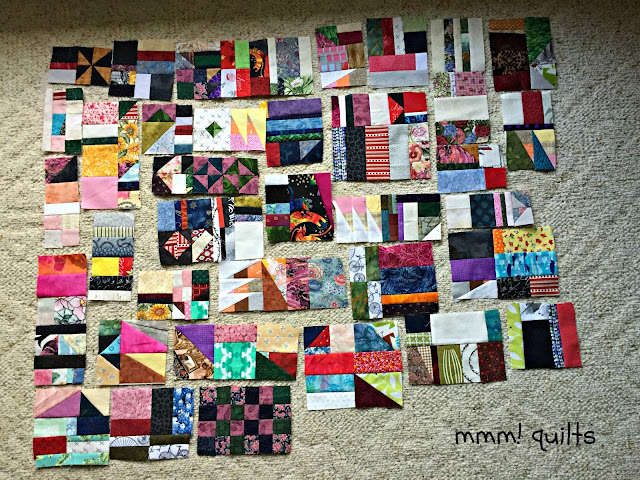 That area measures about 32X39".  Obviously it will shrink considerable when put together.  I have a whole bunch more slabs like the above from previously working on it, as well as a schwack of smaller chunks that need to be sewn up into squares and rectangles like the above.  I don't know...the jury's still out on it being lovely scrappiness or scrap vomit.  I'm leaning to the latter currently, although it does make me smile thinking of the various projects, some fairly recent, others ancient (like scraps I came across from my Trip Around Alberta quilt I made in 2000, so 17-year-old scraps, egad!!) that I made with these fabrics.

Finally, hooray!  I figured out the missing Churn Dash blocks pieces mystery.  It IS the pieces I thought.  I sat and went through them, and saw that there was a bit of a method to the madness, and that I had a couple of 5" squares and a strip about 2.5-3" wide of most of them.  And then, I found some rough notes in a small notebook I have where I drew out the layout and plan for how many cows and how many churn dashes and the bull and one other great thought for a block... Anyhow, my point is I whipped this up just to test my math for a 12" finished block: 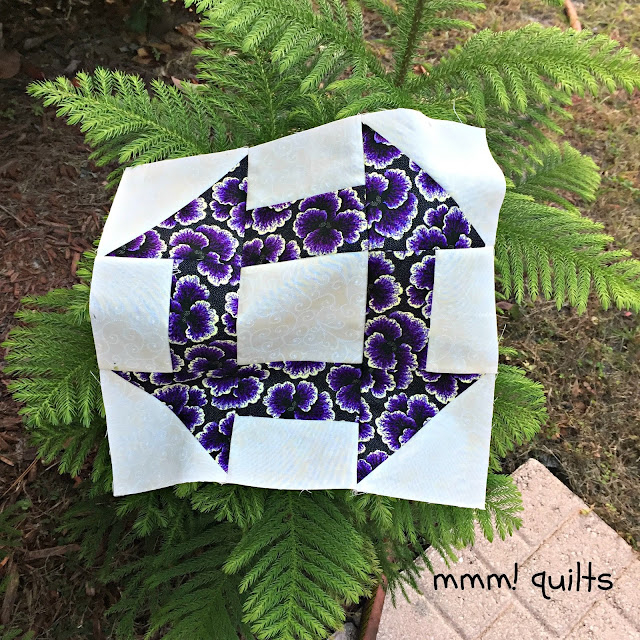 It worked!
Now if I can just stay focused on the RSC 2016 project #1 quilt assembly, and project #2 finishing blocks, and then assembly of quilt, and Cheryl's Meadow Mystery assignment, oh, and test the hockey block for Cindy, well then I think I will be going full steam on the cows quilt.  Just how many projects did I bring down?  Well that's a subject for another post.

Focused.
I did waver a bit from my resolve to not buy fabric 'just because'.  I got an email from Alyssa at Pile o' Fabric and helped her clear out a few yards.  Her sale was better than my LQS's Black Friday sale of 40% off because she only asked that you buy 1/2 yard minimum, whereas my LQS asked you to buy 1 yard minimum.  All her prints are 45% off.  No affiliation to either, but Alyssa's sale is still on and she has some beauties.  I picked up a couple pieces of Katarina Roccella's Avant Garde which I got in my fat quarter club gift 3-month subscription from my husband for Christmas last year (well really as told to do by Dayna).  Avant Garde was my favourite collection of the three months.

If you haven't checked out or taken advantage of Craftsy's Black Friday sale that ends Monday, Nov. 28 at midnight MT, then get your hiney on over there.  They too have some terrific deals which I mentioned in my last post.  The best, IMHO, is their classes deal.  $17.99 for any class.  Remember that's ALL classes, not just quilting.  And kits!  I've bought a few, okay several over the past 3 years of membership, one of which, a knitted scarf, I'm currently working on.  Look at this cute beanie you can scoop for $6CA! You read that right! 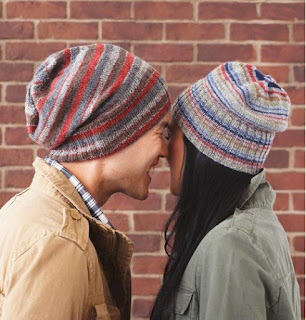 Aww!  I need to knit one for Brady.  I did knit myself the Fisherman's Wife Cowl. They also have a crocheted version too.  I absolutely LOVE it, and I've worn it several times. 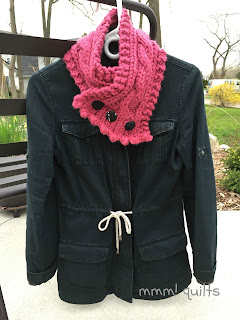 Two last temptations for quilting items:
1.  My pattern Blue Skies and Sunny Days is discounted today only to 45% off.  :-) I figured if I took advantage of Pile o' Fabric's 45% off prints, I would pass along a similar deal. So $4US for a pattern that is easy, quick and has two sizes, and two methods of construction. 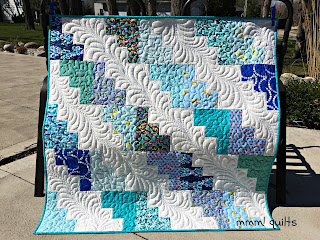 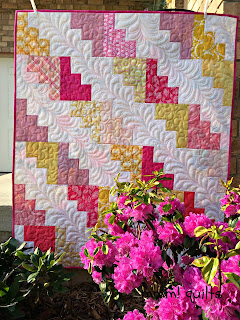 I got a Cotton & Steel fat quarter box at Craftsy's last sale and it is just delicious.  These basics are meant to work with all their lines; just look at those saturated colours, mmmph!  Thank you so very much for clicking through on my affiliate links, as I do get a small commission on purchases. I promote these because I believe in their value. :-)

Happy Cyber Monday shopping!  First, I'm going to watch some more Netflix, "The Crown" to be specific.  It is just excellent.

Linking up with
So Scrappy
Main Crush Monday

Posted by Sandra Walker at 7:06 AM