A Quilting Motif and A Longarm Technique

As you know, I'm working on quilting the Cows quilt. I have four heifers left, a few churn dashes and the barn. Well, I also have to finish the other half, or two-thirds more like it, of the border.  As is usually the case when I quilt a quilt, I have a very, I mean very, vague quilting plan in my head.  Once the quilt is loaded, it starts to talk to, sometimes whisper to, sometimes cajole, me.  Such was the case with this one.  I had no idea how I was going to quilt the churn dash blocks, also known by several other names, including Hole in the Barn Door. Most à propos for this bovine bedcover. Once loaded on the frame, I had an idea... 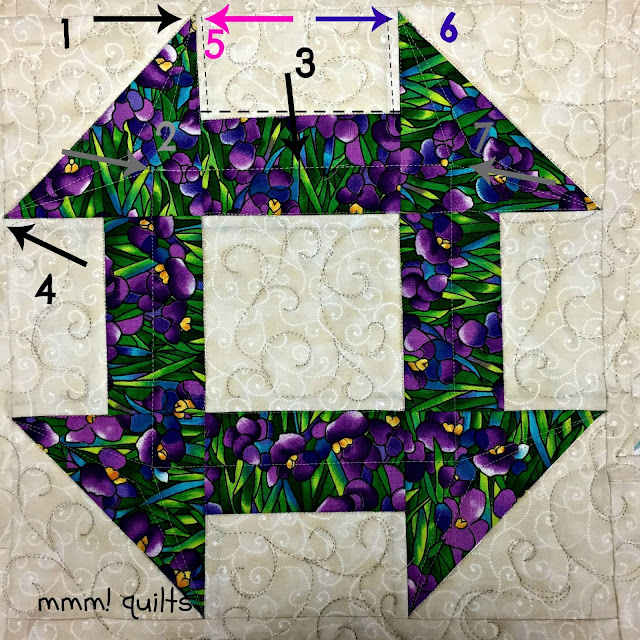 "What the heck?"  you're probably thinking, or maybe, "Ooh, love that fabric," or even, as Tish said when I sent her the yellow cow all quilted, "Those swirls are awesome!"

Here is how you quilt this block in one pass, ditch stitching and all! AND this can be done on either a longarm or a domestic machine! Use a ruler or your walking foot.

1. Start here. ('well duh')
2. Stitch to point 2 (probably still, 'well, duh,' but just in case...) the centre of the inner 'box'
3. Stitch a square in the centre of the purple rectangles, which in my case, for this 12" block, is 1" in from the seam line. Go all the way around until you wind up back at point 2.
4.  Stitch out to point 4.
5. From point 4 stitch another elongated 'v' shape (we're doing dot to dot à la Angela Walters in case you haven't noticed) ending at point 5.  Which is really point 1. 😉
6. Stitch in the ditch (aka SID) over to point 6. Note my attempt at dotted lines to indicate SID!
7. Stitch in to point 7, which is the top right corner of the box you stitched in step 3.  Repeat from step 4 for all four corners of the block, ending back at point 1!

Then I SID along a floral seam line to an inside corner, stitched in the ditch all the way around the inner square, and did the swirl filler in there, then went back out again and continued the swirl filler for the background around the outside. I'm using Superior Threads So Fine colour 403 which blends nicely with both background and all the churn dash blocks.

A LongarmTechnique for Continuous Quilting

About a year, maybe more, ago, a reader asked if I could explain how I advance, then back up, then advance a quilt on the longarm. This was when I was doing Dayna's quilt, Shoot for the Moon, and trying to get as long a pass as I could at some of the intricate designs on her quilt.  I found myself doing this for the outer border design for this quilt.  I am self-taught, other than watching online videos and Craftsy classes by Leah Day, Angela Walters, and Natalia Bonner, oh and Jamie Wallen Youtube too, and none of them talk about this, so it's just me. If you think that "GASP! This is just not done!" well, I do it, and it works fine. 😁

For the top section of border, it was easy to start on the left side of the quilt, about 15" down from the top left corner, quilt up to the corner, across the top border, and down to the same starting point on the right side of the quilt. I did the border after I'd quilted the first row of cows and churn dash blocks, so I advanced the quilt and continued down the border for another 15" or so (I have an 18" Avanté). This meant I could quilt longer without breaking thread.

1. So now I am at the point where I have quilted two more rows of cows and churn dashes and I want to do more of the border. First stitch in the ditch between the border and the background of the quilt. Also stitch 1/4" in from the outside. 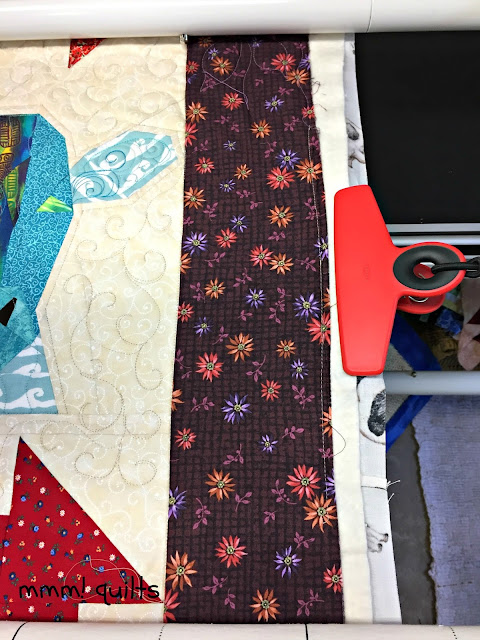 2. Next, advance the quilt, and SID as you just did. You can see I was able to stitch all along the red churn dash and about half way into the barn block. Do this SID on the border on the opposite side of the quilt as well. 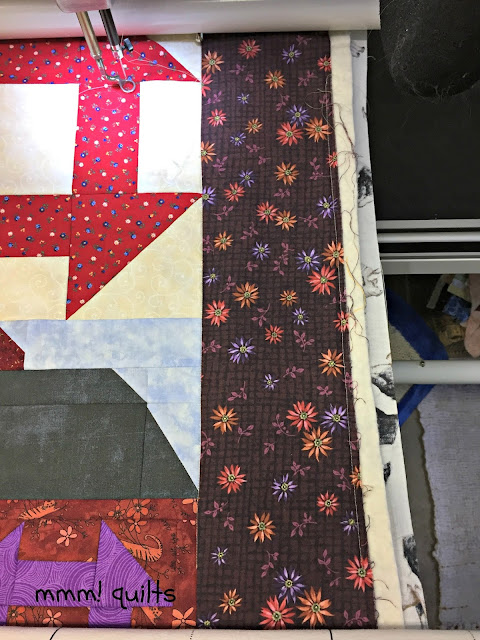 3.  Then, back up to where you started the ditch stitching (first pic).  At first when I wound the quilt backwards, I freaked because the quilt sandwich, in its entirety: top, batting and now backing, got wound up on the belly bar! 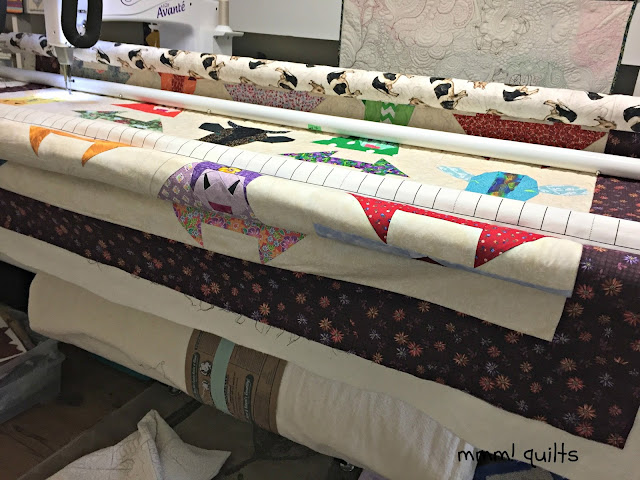 Yikes! I thought something bad would happen...but it didn't!  So starting at the point where I was in photo 1, I switch now to my mauve thread, and continue the border motif over the course of that length of the border, advance the quilt to photo 2 spot, and continue doing the border up to being level with the barn.  I'll stop there.

4. Then I go over to the opposite side, in this case the left, back up the quilt again to the photo 1 spot, but on the left side of the quilt, and pick up where I'd left off on that border, quilting down until I'm level with the barn block.

It's not as wonderful as doing the border in one continuous pass like you can with a DSM or sit-down quilt machine, but you can get fairly lengthy passes.  And it is wonderful not to have the weight of the quilt to manipulate through the machine.

Having a dedicated quilting machine means I can still piece if I feel the urge...
I made block 106 this morning, so as of writing this post, I am only two blocks behind in the 150 Canadian Women QAL!  I aimed for one block a day this past week, and I've done it, so if I can keep that up this coming week, I should be all caught up by next weekend. Yay! I also worked on a couple of my RSC 2017 projects, which I'll show you in another post.

Linking Up
Cooking Up Quilts
Free Motion by the River

Posted by Sandra Walker at 8:59 PM