Welcome to TBT for June! This is where we bring out quilts we made before our blogging days, photograph them and tell their stories. There are always stories. Remember the Chicken Soup books that used to be so popular? I think a collection of these quilty stories would make an awesome book right? Well, it's like you're getting that for free, so meander through the links below and enjoy.

I mentioned earlier this week in my Playful Pillows post for Island Batik that I would be telling this cushion's story on TBT. 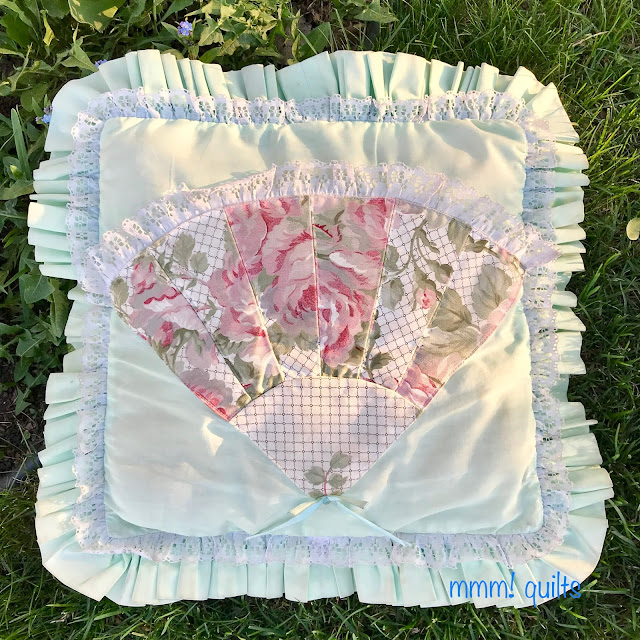 It is the second fan cushion I made, the second quilted object outside of a sort-of quilt I made as a kid for my Barbies. I bought the broadcloth (I know! 65/35 cotton/poly blend I believe?) and dug in Mum's scrap back for some kind of floral. She saved scraps from making us four kids as well as herself clothes, and she had several pieces that were swatches from a home dec/upholstery book, as well as several pieces from the Laura Ashley mills where her brother, my Uncle Frank was a textile chemist. Remember I made him con fuoco at her request just two years ago? Gosh, I posted the finish June 8, 2016, and here we are on June 7. Sadly he, too, has now passed away, just within the past six months.

Here is the back, taken in the shade as well, at my mum's house. Yes, it's a bit dirty--but I love that!--because it was used every day. 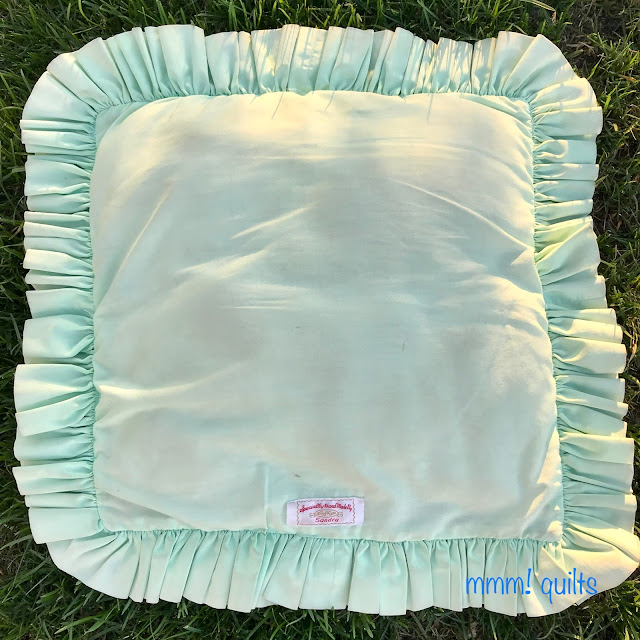 She had this on top of a quillow I made her (quilt with an attached pillow cover that is folded into itself and then stuffed into that cover to make a pillow) both on her computer chair. This made the chair more comfy; she didn't have a lot of padding on her derrière to start with, but in the years after Dad passed away, she became very thin. It held up very well didn't it!

I don't have the exact date, didn't write it on that label, but I know it was made after we moved back to Edmonton from the Windsor area, so somewhere around 1990/91.

I was always interested in quilts. My friend Shirley learned to quilt from her grandmother-in-law, who also was my husband's great-aunt. She was taught the old-fashioned way: use corrugated cardboard, trace around with a ballpoint pen, and cut out with scissors. Every quilt was hand-quilted. Shirley almost always did fan blocks. Mum loved fans, so I knew I'd make her one of these after I experimented with doing one for myself first.

Mum LOVED flowers, loved every moment spent in her garden and in others. So I knew I had to find a good floral fabric in the scrap bag. I'm not positive, but I'm 98% sure this is one of the swatches of fabric from Uncle Frank. I appliquéd by machine the fan onto the broadcloth, green of course, as that was Mum's favourite colour. I put lace behind the fan because so often they do have lace don't they? A small bow at the bottom finished it off. Then I layered lace with the ruffle I did around the edge to tie in with the lace at the fan's edge.  I hand-quilted along every seam, just to secure the fan to the broadcloth; there is no batting there. I stuffed it with polyester fibrefill, didn't use a pillow form!

Here it is with the evening sun on it to show the hand-quilting: 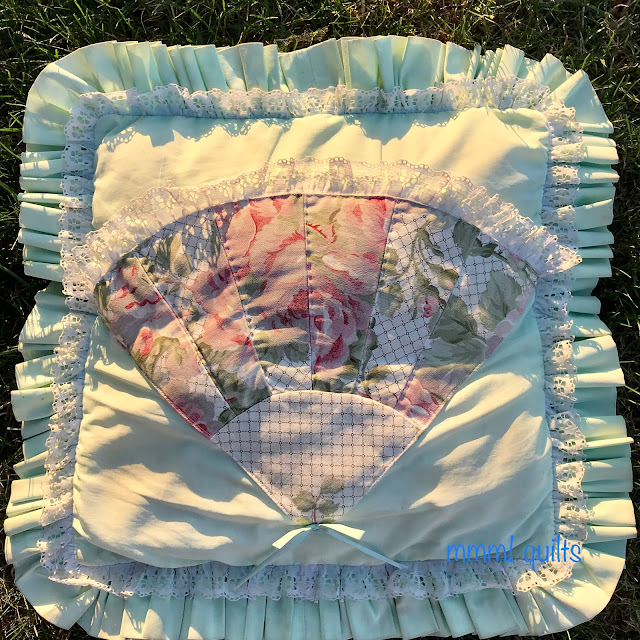 You can also see the creases in it from her sitting on it so often. That makes me so happy. She used the stuff I made her: her 70th birthday quilt on her bed, her 80th birthday one on the couch in the living room, a runner on the kitchen table, another runner on the downstairs coffee table, her Union Jack placemat for her tray she often used for her breakfast in front of the TV, her pounded flowers wallhanging (of her flowers from her garden) hanging in her bedroom, a colourwash one in the guest room, their 40th anniversary quilt on the chair in the guest room...you get the idea.... She had her new bag I'd made her with her on that fateful day...

My nephew, Dray, asked if he could have that bag, actually the original one, which had literally fallen apart from its much-loved use. I'd even replaced the handles for her once at her request! And those handles also frayed and let go...so I made her the new bag, which she also loved, but that first one was her absolute favourite. So I said he could have them both. Then he asked if he could have this green pillow. Big breath. My heart clutched; I'd already put it in my pile of quilts and stuff I made her to take home with me... the original fan pillow, my very first quilted object, I no longer have. I think I gave it to Goodwill when we moved here from Alberta...so this one has extra meaning over and above me having made it for Mum. I had to walk away, and talk to myself. Remember I'm working on being more generous this year. So I told myself,
Me 1: You will die too, Sandra; best let Dray have it and enjoy it...
Me 2: ...but I can't!
Me 1: Yes you can.
Me 2: It's hand-quilted!
Me 1: It's okay; he'll take care of it.
Me 2: ......... (big breath in) Okay.

So I said he could have it, and I told him, ha, impressed upon him how important it was that he take extra-good care of it. Took it outside and did this photo shoot, knowing it would be my TBT for today. So much meaning, as you see: early quilted project, made for Mum, Mum's favourite colour, a fan, flowers...
A wee digression here, but meaningful:


...this cushion was used every day...wow. Every single day, because she was on her computer every day for a little or a long while.

Dayna and I left Mum's after me giving it to Dray, and went to stay at Brianne and Brady's for a couple of nights. Almost at Brianne's, Dayna turned to me and said, "Mum I have to tell you; Auntie Linda and I talked and we think you should have the pillow. It's in your suitcase."

It was like I was punched in the stomach. A similar feeling to seeing those rhodos, but caused by a different emotion. I'd already made peace with letting it go. To have it back? A whole riot of conflicting emotions from joy to guilt to annoyance with myself as well with as my sister and Dayna... but here it is. However, I did take the quillow, the cushion beneath this one, remember, back to Mum's before I left for home, and said Dray can have it as long as he likes.
Here's me amongst those now 32-year-old rhodos so you see how massive they are, :

I've washed the pillow so it now no longer has the dirt marks on it. I had to undo the hand stitching where I'd closed the seam to straighten out and untangle the poly fibrefill, as it had gotten all bunched and lumped up in the laundering. Stitched it by hand back up. Now the original has a twin, or perhaps a daughter... 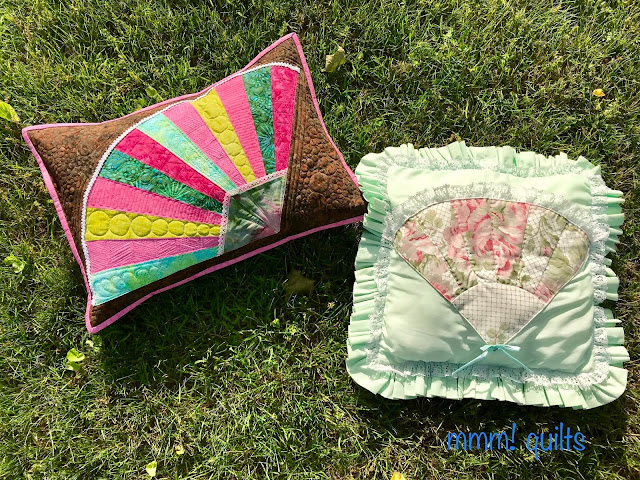 I also brought home a cross-stitched fan I'd made her in 1984 that I want to include in this post, and nearly forgot. I remember stitching this mostly in the daytime, because even with my then-24-year-old eyes, stitching at night was difficult because this was on 22-count linen with Coton Perlé, egad. May I just say über-tiny?! 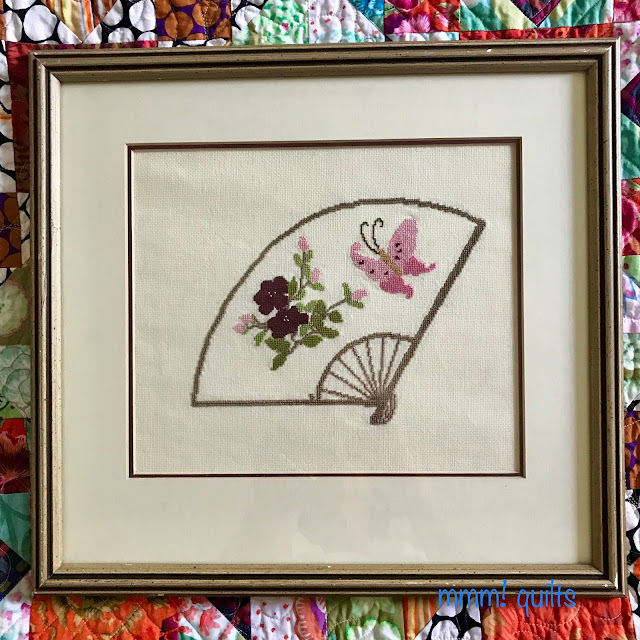 Yes, my mum adored fans. I had this professionally framed, which cost me a lot of money, money I didn't have in those days. I hadn't got a full-time teaching job here at that point, had left my full-time, permanent contract teaching job back in Alberta to move to southern Ontario, the small town of Essex to be exact, just 15 minutes away from Kingsville, where we now live. I was doing a little substitute, or supply, as they call it here, teaching. I gave this to my mum for Christmas that year, 1984. How do I know?

It was only when I took that photo, that I paid a little closer attention to the frame shop's label, thinking it was the one in Edmonton that I would use from time to time for special cross-stitch pieces. Oh no. I think my mouth literally dropped open. Look: 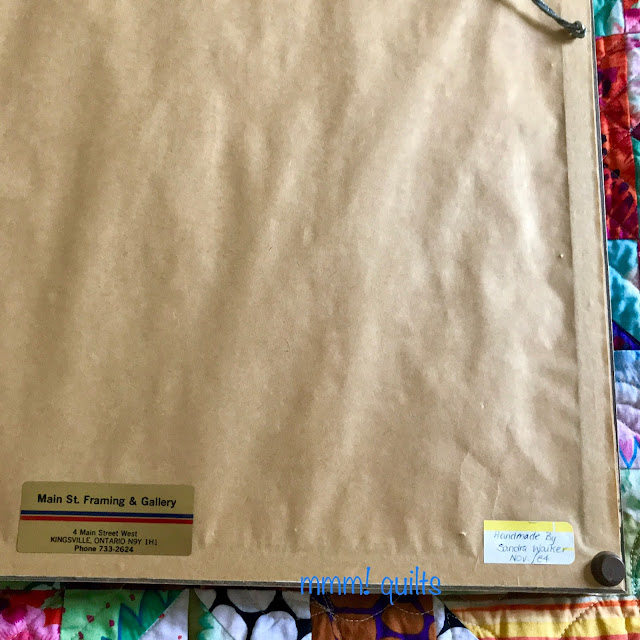 I'd been focussing on my label, yay, dated! Then when I took a closer look at the frame shop's label... whoa!
I had this framed in Kingsville! Little did I know that I would leave Essex in 1989, 5 years later, with MacGyver, our two little girls, Dayna just a 1-year-old baby, our two dogs, a cat, and move back to Alberta to be with my family, so the girls could grow up with the best grandparents in the world, and their cousins, aunts and uncle... And that I'd move BACK here, retiring from teaching, and make our home anew in Kingsville, a place we always loved even back in the 80s. Full circle. I'll let you connect the dots of this cross-stitched piece's full circle.

I hope you'll consider digging out some of your pre-blogging quilts or quilted projects, and share their stories with all of us. I promise you, once you start writing it down, you may find there's more of a story in your quilt than you'd completely realized. Be sure to post your quilt on Instagram too and hashtag #throwbackthursdayquilts and tag me @mmmquilts!


Linking up
My Quilt Infatuation
Posted by Sandra Walker at 10:43 AM