It's Thursday, right?! The first Thursday of the month...yikes! It's Throwback Thursday, aka TBT!

I did not forget about it, honestly I did not. I just didn't write the post ahead of time, and then, yeah, right about 8:15 am when I finished my Yin yoga practice, zing! When I did my Yin on Monday, I thought I'd do this month's post on this quilt, because I often use it when I do Yin through the summer months. This is called Windy Day Fun. I love all the secondary patterns you see from simple squares, triangles, and rectangles. 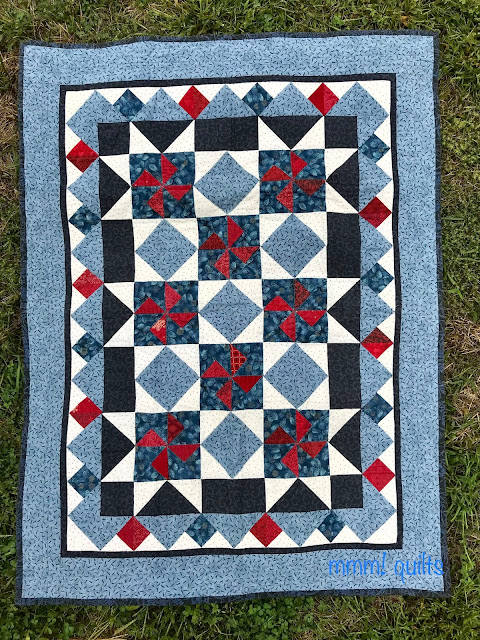 A note about the blog appearance: I met with a graphic designer last week, and so there is some behind-the-scenes work going on as I tweak, and we discuss improvements/changes! It's a WIP: work in progress, so please bear with me. I lost my quilty photos banner, but she is going to make me a new one anyhow, so not to worry is what I told myself!

It was the mystery quilt at my former guild's retreat, Fort Saskatchewan Quilt Guild, in Alberta. It was the second mystery quilt I'd one, and the second retreat I went on, back in the Fall of 2000. Funny I was just saying to the hygienist at the dentist earlier this week remember when the Y2K scare was on? All the computers were going to go whacko and therefore the entire world would short circuit. People bought generators, water, food.... And the the clock struck 12:01.... and all was well. Humans are funny.

Ah, those retreats were such fun! Never as much sewing as one planned to do, always too much food eaten. Lack of sewing occurred especially if working on a mystery where the steps came out Friday night, Saturday am, Saturday night, and then final clues on Sunday am. They usually occurred in mid to late October, starting Friday evening, but those who didn't work (or those who took a half day off!) would drive out early to get the best tables, (I'm serious), and take advantage of a few extra hours before the real retreat began, to sew. Sadly, being a teacher, I did not ever get out there early! Often the retreat would start out with glorious weather, and walks by whatever lake the campground was on were a must. There's something orangey-gold about the sunlight, the very air, at that time of year in the northern hemisphere; does that same kind of warm-gold light/air occur in autumn in the southern hemisphere? Anyhow, in central Alberta, that time of year means snow can come at any time, and often on the Sunday it did, and we'd be packing up early to avoid the worst of the storm.

This is a cool quilt: the pinwheels use a folded insert technique that means they are 3-dimensional.

Not so much texture shows on the quilt because it's a dull day, and because it's mainly stitched in the ditch with my walking foot. 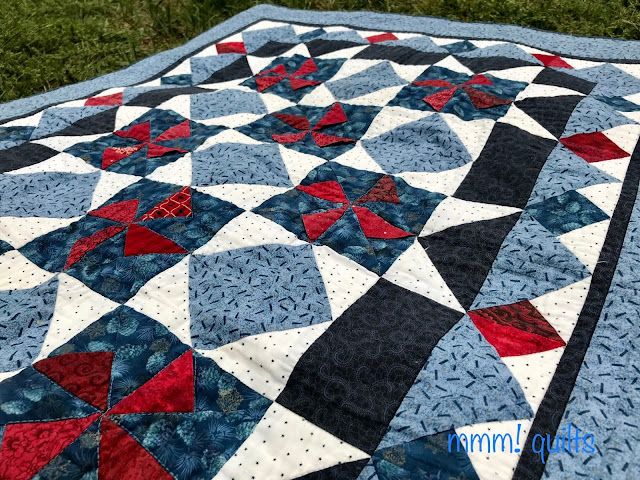 I love the burgundy and blues together; before my current blues and greens favourite colour combination, this was it, and it still makes my heart go pit-a-pat! 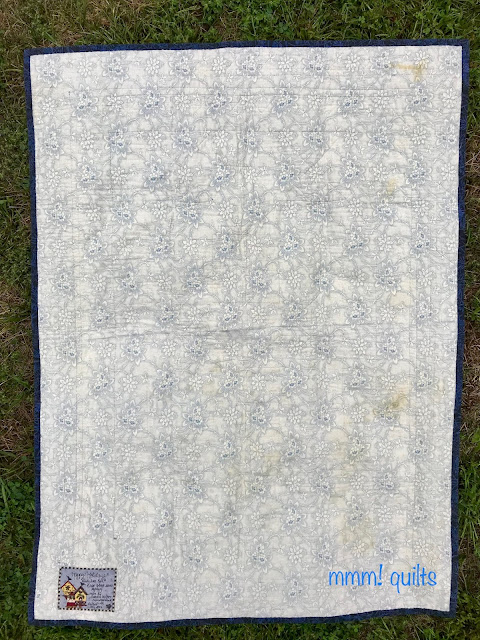 This was backing I got at Walmart, something like 5 metres of it at $5/metre! I've used it on several quilts from the early days.

The straight stitching still does give some texture, even though with no sun to cast shadows, it's not that apparent here. 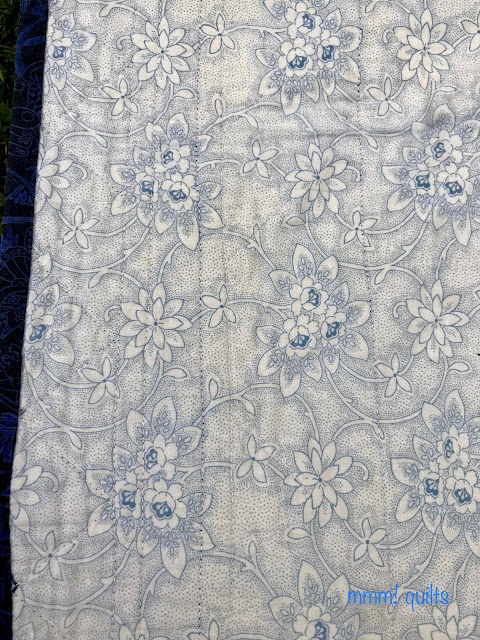 I like the zigzag pattern from the SID along the squares inside two-colour squares border. See below. I need to do this again on a quilt!

Binding was a single fold, 1/2", wider than I do these days, and machine-stitched to the front, and hand-stitched down to the back. I use this quilt a fair bit, have washed it several times, and all is good for holding the binding down. I have no clue where the stains you see have come from. I unfolded the quilt one day and noticed it. Washing did not remove them. They look a bit like faint rust stains, but it wasn't resting against any metal that I'm aware of.

You know I'm a label-loving girl, and have been since pretty much the beginning of my quilt-making. 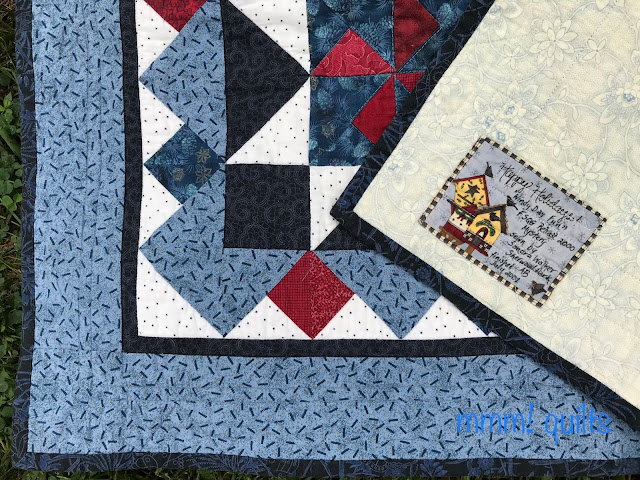 Remember next month TBT will be hosted by Andrée at Quilting & Learning - What a Combo!
Link up your quilty projects from your pre-blogging years below!