I hate to start off with the weather, as it really is all relative.  However . . . .

Here in southwest Florida, it was 75F today, sunny, clear blue sky, light breeze and very low humidity, like 35%.  My husband and I, wusses that we have become, were on the cool side, unless I went out into the sun, which I did, a couple of times, at which time I was lovely and toasty.  My friends and family back in Alberta are FROZEN at 5:30 pm, as I type, with temperatures plummeting to near 40 below tonight, which is where both Celsius and Fahrenheit meet, in case you've forgotten some of your Science.  The windchills at the present moment, are dipping to -43C aka -45F below zero!  My friends and family in southwest Ontario at 7:30 pm are also frozen:  it's currently -5C aka 23F.  Wind is a factor there too, it feels like -10C aka 15F.  And here I sit, 7:30 pm, typing, with a short-sleeved sweater on, at 65F aka 18C.  Like I said, it's all relative.  Maybe this will explain why "crazy" Albertans, at temperatures in the +5C/ 40sF, will break out the flipflops and shorts!!  Meanwhile, "crazy" Floridians (to us northerners) are wrapped up in scarves, gloves, hats and boots, I kid you not, when the temperatures plummet to 40s.  Relative.

Here is some green upon which to gaze, and blossoms to warm your heart for those of you in the frozen hinterlands.  Apologies for the fading light in which the picture was taken. My sister asked for a picture, and I forgot (shocker) until several hours later, that I was supposed to take one!


So back to Brrr Park. 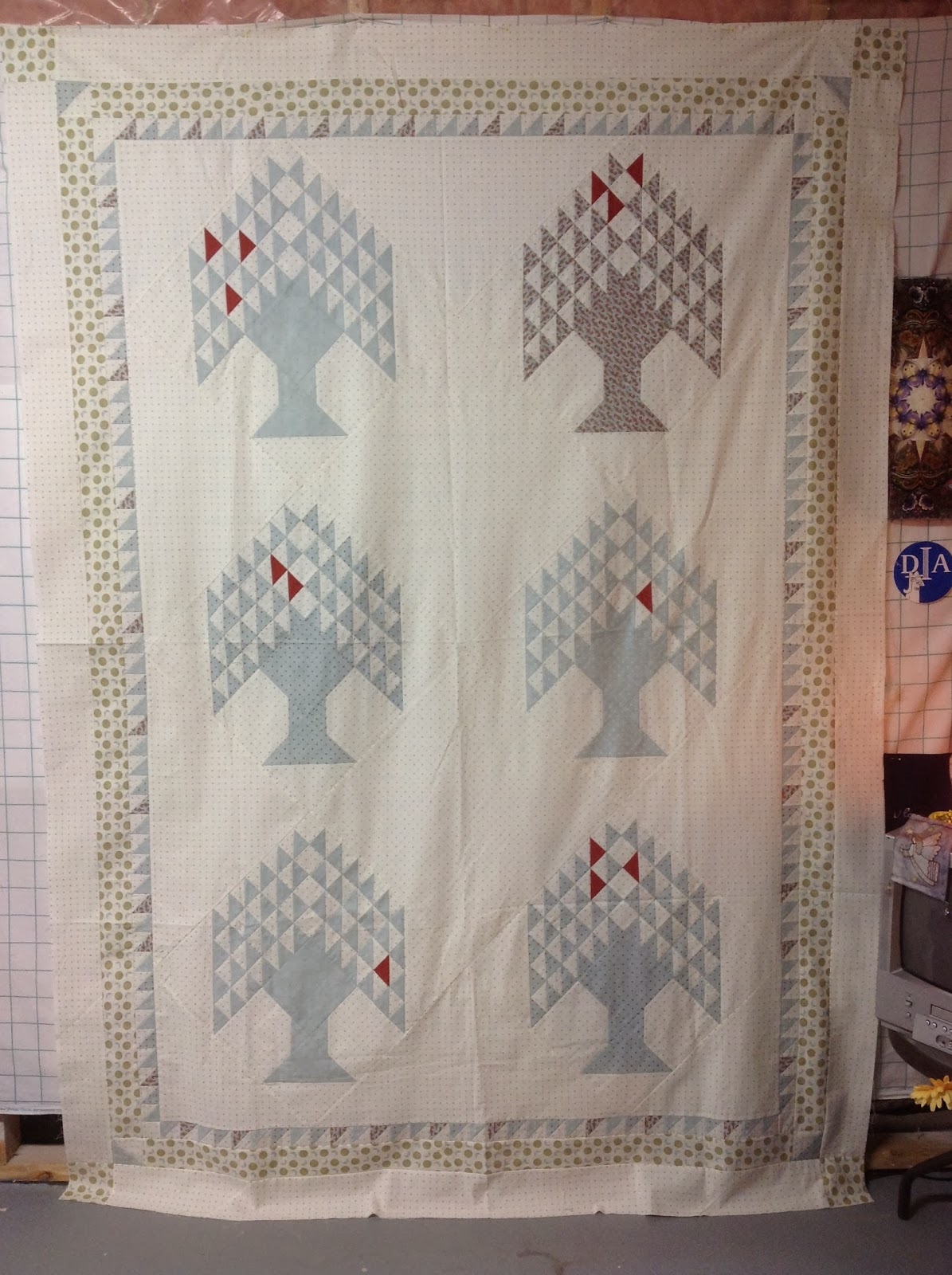 It is named for Buhr Park in Ann Arbor, Michigan, which is where the fabric and pattern designers, sisters Polly Minick and Laurie Simpson, are from.  Hey!  I just found their blog, and discovered that they were HERE!!  Well, actually in Punta Gorda, but I was in Port Charlotte, on the same day they were in Punta Gorda, which is a mere 8 minutes across the Peace River, from where we were, tootling around!!  Wee-ooh, wee-ooh, I hear my sister, Linda, saying.  Laurie lives in Ann Arbor and Polly lives in Naples, FL!  Très cool.

I bought their pattern and kit at Alma Sue's about 5 years ago, and I worked on the quilt top here at our condo over a few school holidays, on my beloved first sewing machine, my Elna.  I finished up the quilt this past summer on my Bernina, and sewed a back this past Fall.

I just think it's serendipity that I chose a pattern and fabric designed by two sisters, one of whose home is basically across the Detroit River from where I now live.  Give or take a few miles/kilometres.

Ella at Alma Sue's told me there would be enough fabric in the kit to make the back, and there was MORE than enough, although not enough of the light background to make it wholly out of one fabric.  Therefore, I decided, since I had tons of fabric left over, that I would make a funky, interesting back.  I have always loved backs, and was known in my western Canada guild for having beautiful backs.  Ha ha, there's a smart-ass joke in there, I know.

Here it is under construction this past Fall in my basement corner sewing "studio": 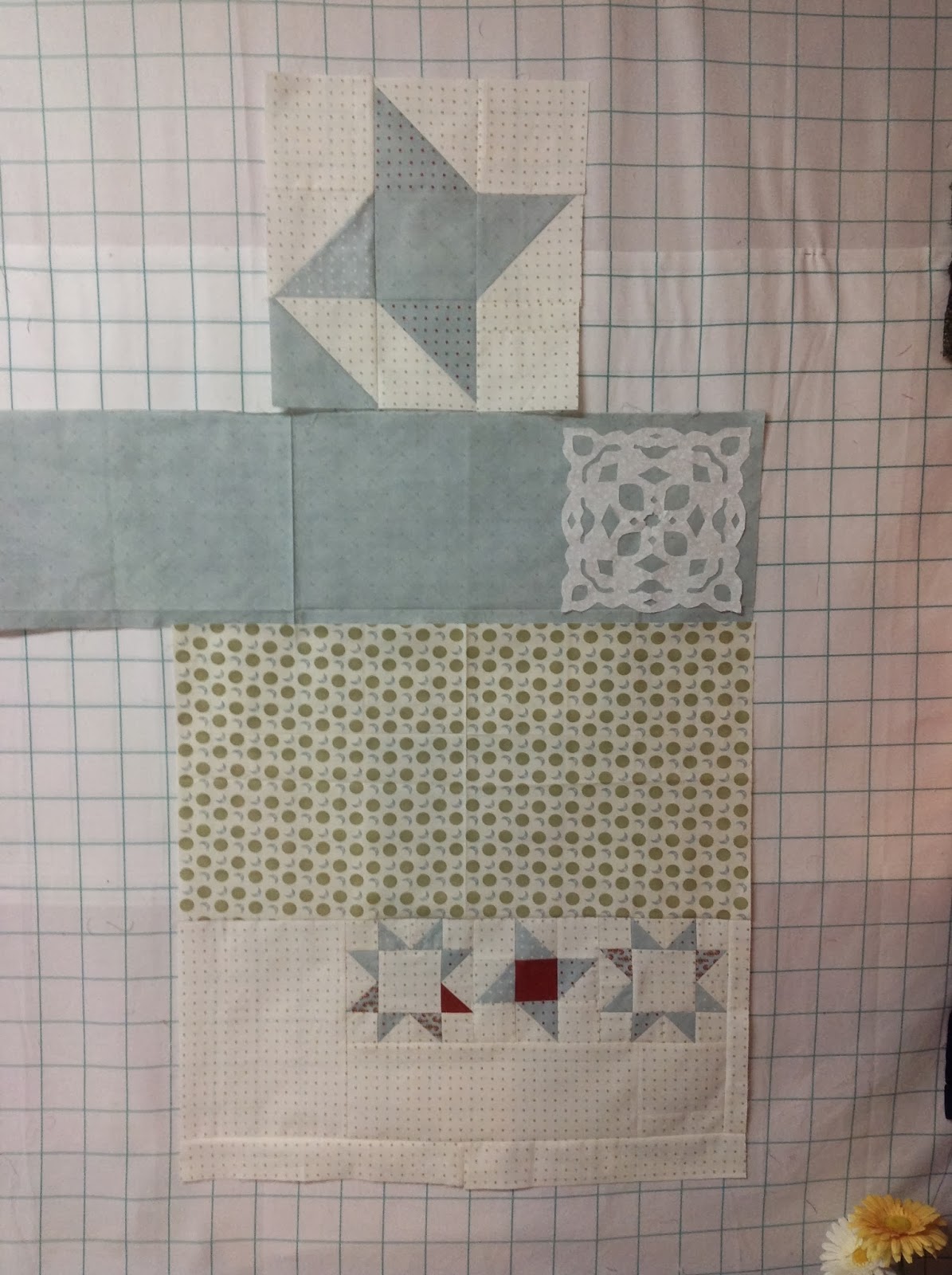 Playing with chunks of fabric I had left.  Had fun making the snowflake - took me back to grade school/elementary days!  I decided to ix-nay it however, in favour of the one you see below. 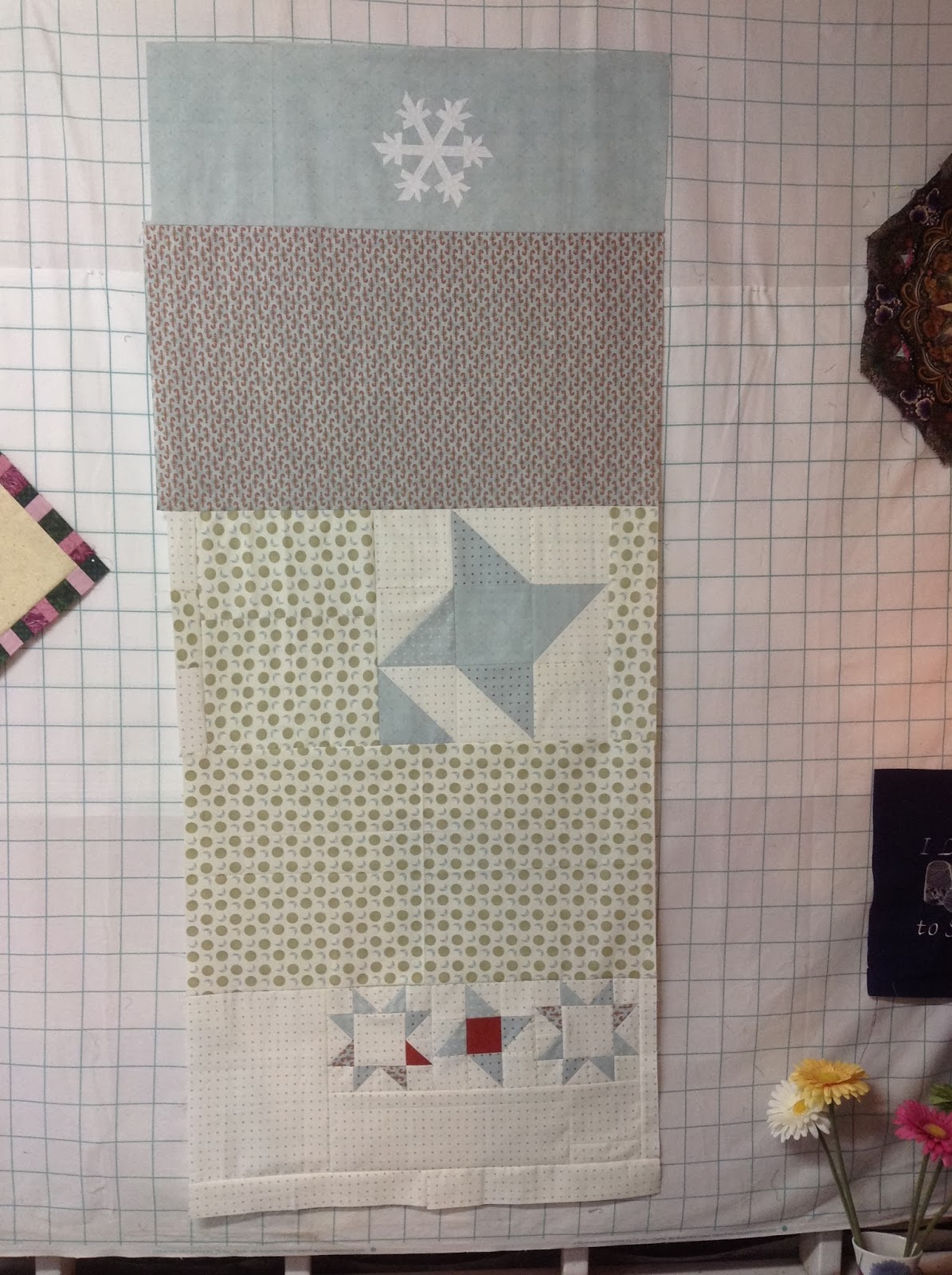 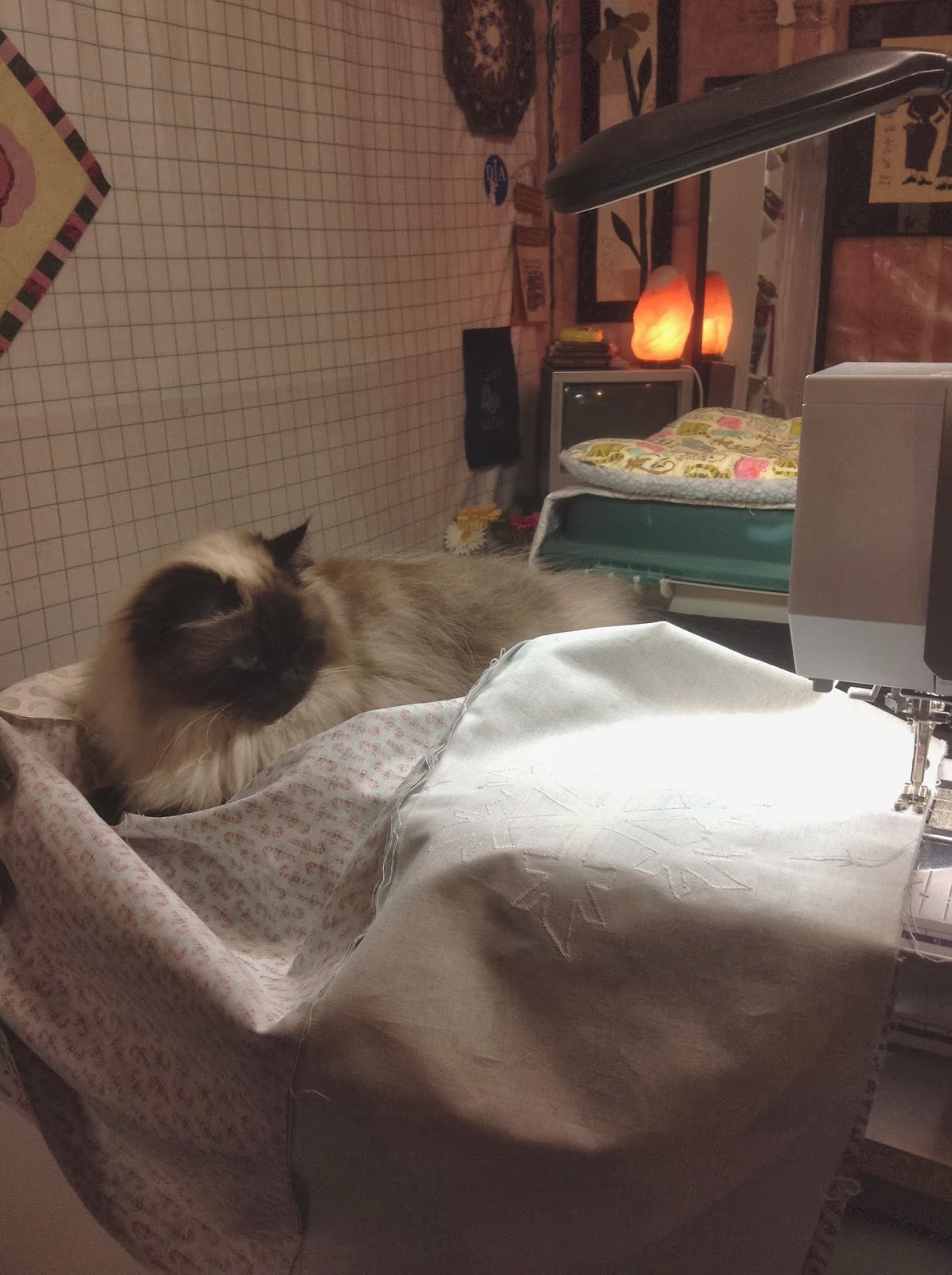 Gotta get that "cat feel" from Bella, as well as approval and direction. 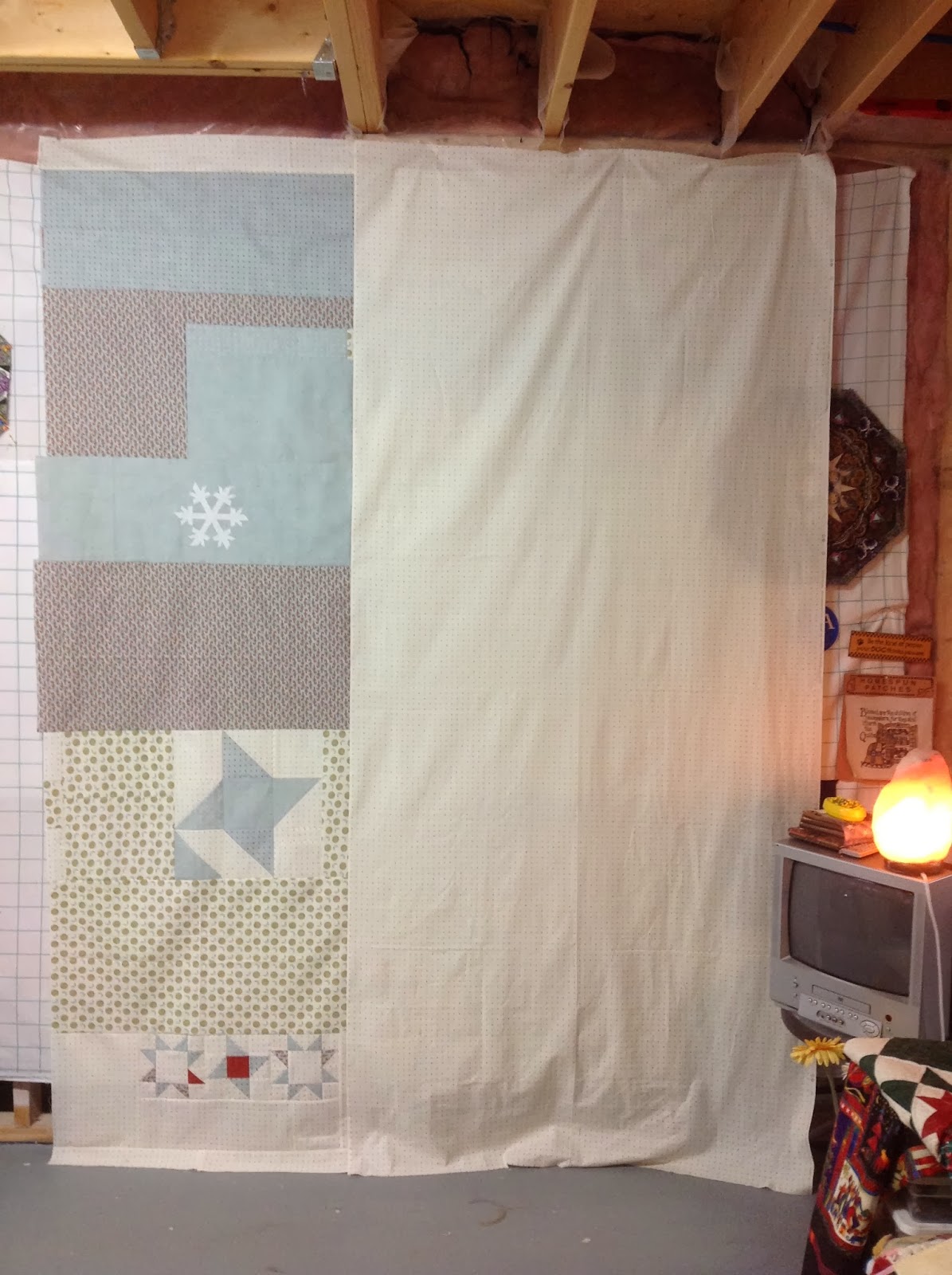 And ready to be folded up and packed off to Florida, which it was.  I will use one of the 8-pointed sawtooth stars at the bottom left as my label.

I bought Angela Walters' "Dot to Dot Quilting" class from Craftsy, a month or two ago.  I started watching it this afternoon for ideas as to how to quilt this baby.  I know I want to do huge feathered wreaths as I mentioned before, but how to quilt the trees of life...hmmm...I'm in the mulling it over stage now that I have all the in-the-ditch quilting done.  I'm anxious to get rolling though!

Update: My point about the weather was that I find it so ironic that at the time I bought this quilt kit, in sunny southwest Florida, I was living in northern central Alberta, at 53N latitude, where it is a lot colder than Ann Arbor, MI!  Then, I pretty much constructed the entire top here at the Florida condo, and am now machine-quilting it at the condo where it's lovely and warm pretty much every day.  AND, I've since relocated to the southernmost town in Canada, down at 42N latitude, where you need to go north to get to Michigan, USA, where one of the sisters who designed the quilt and the fabric lives, not 45 minutes from where I do there, while the other sister lives about 45 minutes from where I live here in Florida!  And, I'm making a Brrr! quilt with cool colours while I look at nothing but green and sunshine!

Posted by Sandra Walker at 8:30 PM