Not sure if that is what I'll keep as this one's name, but it has to be something that gives a nod to the scraps as well as to the "ahhh" of serenity I felt as I worked on it.  I started it back in ... egad, the end of July, 2014.  It got put to one side because of guild deadlines for the Round Robin, which I never met anyhow!  I just love blue and green together.


It is the May quilt in Cynthia's (Quilting is More Fun Than Housework) Scrap-a-Palooza quilt series she did in 2014.  I made a total of 4 quilts from this series, and I plan to make some more of her designs from last year.  I get so much satisfaction and joy out of playing around with the colours in my fabric stash.  She showed me some really smart ways to organize my scraps, and also showed me how to calm the scrappiness of a quilt, to unify it.

I copied Cynthia's quilt as far as alternating her A and B blocks.  I liked the look of that, as well as it maximized the use of my fabrics.

The quilt will finish at 48.5X56.5" because I'm not putting any borders on it.  I can see me taking this small lap quilt to yoga class.


It's fun to look back and think on all the quilts the blues were a part of.  As I said, I have quite a few blue squares left over...so I can feel another quilt percolating already!  Maybe the 16-patch of Cynthia's will be it.  After all, I have a bunch of green scraps from Fleurs to use, now that she's done.

Lara of Buzzin' Bumble asked me how I manage two sewing rooms, one up North and one down South.  I said that was a great topic for a future post (and I haven't forgotten it) but here is an example of the angst this luxury can cause:  I know I have a few choices of blue yardage in my stash for the back.  I've bought 2-3 yards of a fabric when it's on sale for this very purpose.  But ya, it's up North.  I never did even think about quilting this one down here... urk.  And I just want to quilt it.  Like now.  Might have to visit Fat Quarter Shop's sale section...that or get Dayna to mail me the garden print blue I used in this quilt, as I know I have a couple yards of it.  What to do...

A few people have mentioned the rarity of seeing Naala, our Rottweiler, on the blog.  Well, she is a very calm dog, a virtual goldfish in many ways.  So, with this calm quilt, I give you Naala, our calm dog.  This was taken last week. 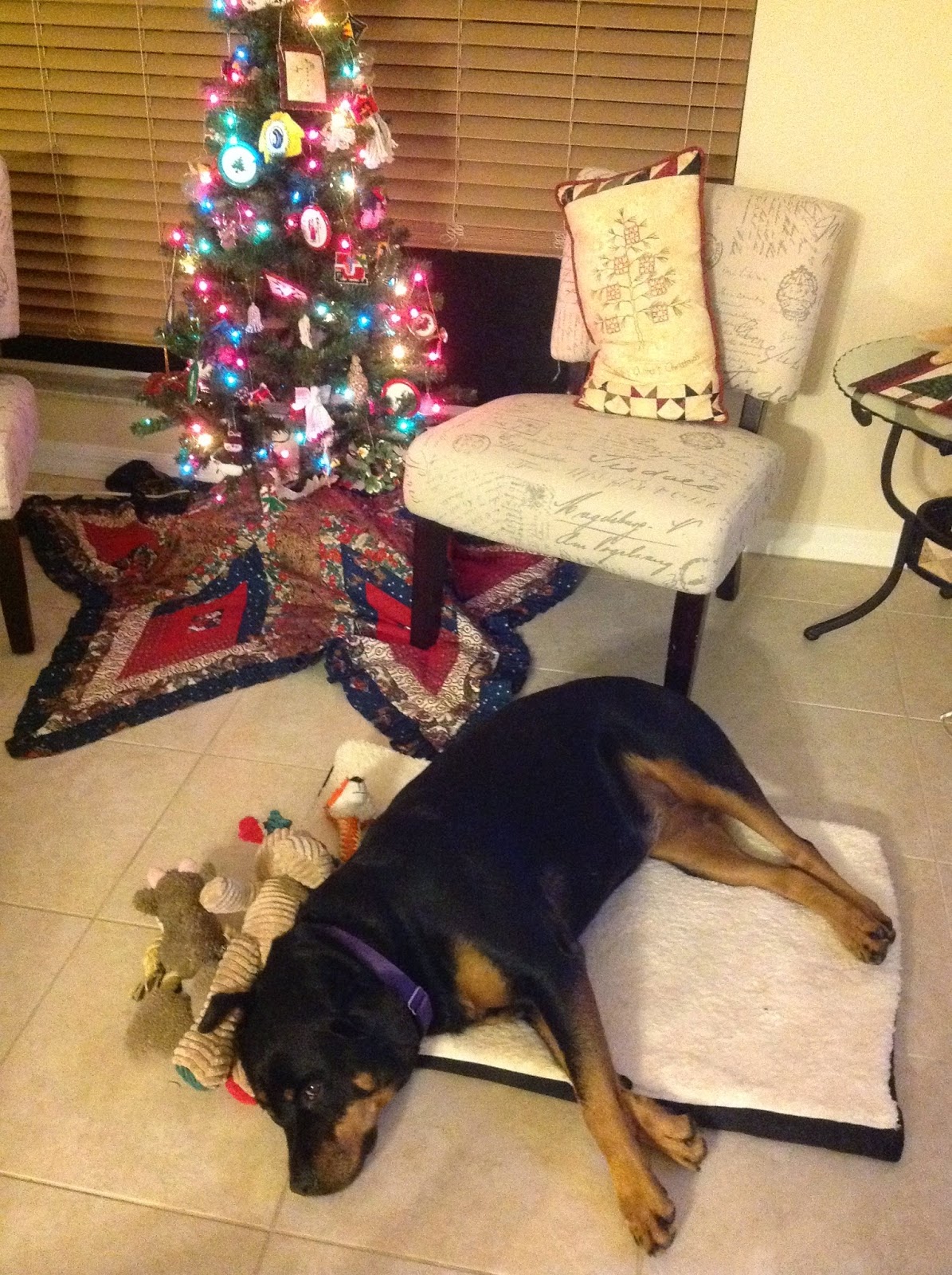 She is relaxing on her new (memory foam!) day mat with her stuffies beside her.  Outside of chewing out Cow's eyes, and slobbering daily over Mr. Fox's head (but leaving his rope body untouched), she loves to just have one by her head or by her paws, chomping it once in awhile to make it squeak, and mostly just licking it.  Rudolph is barely touched.

Rocco, on the other hand, although he loves stuffies as much as Naala, believes in using and abusing them.  Until they are no more... 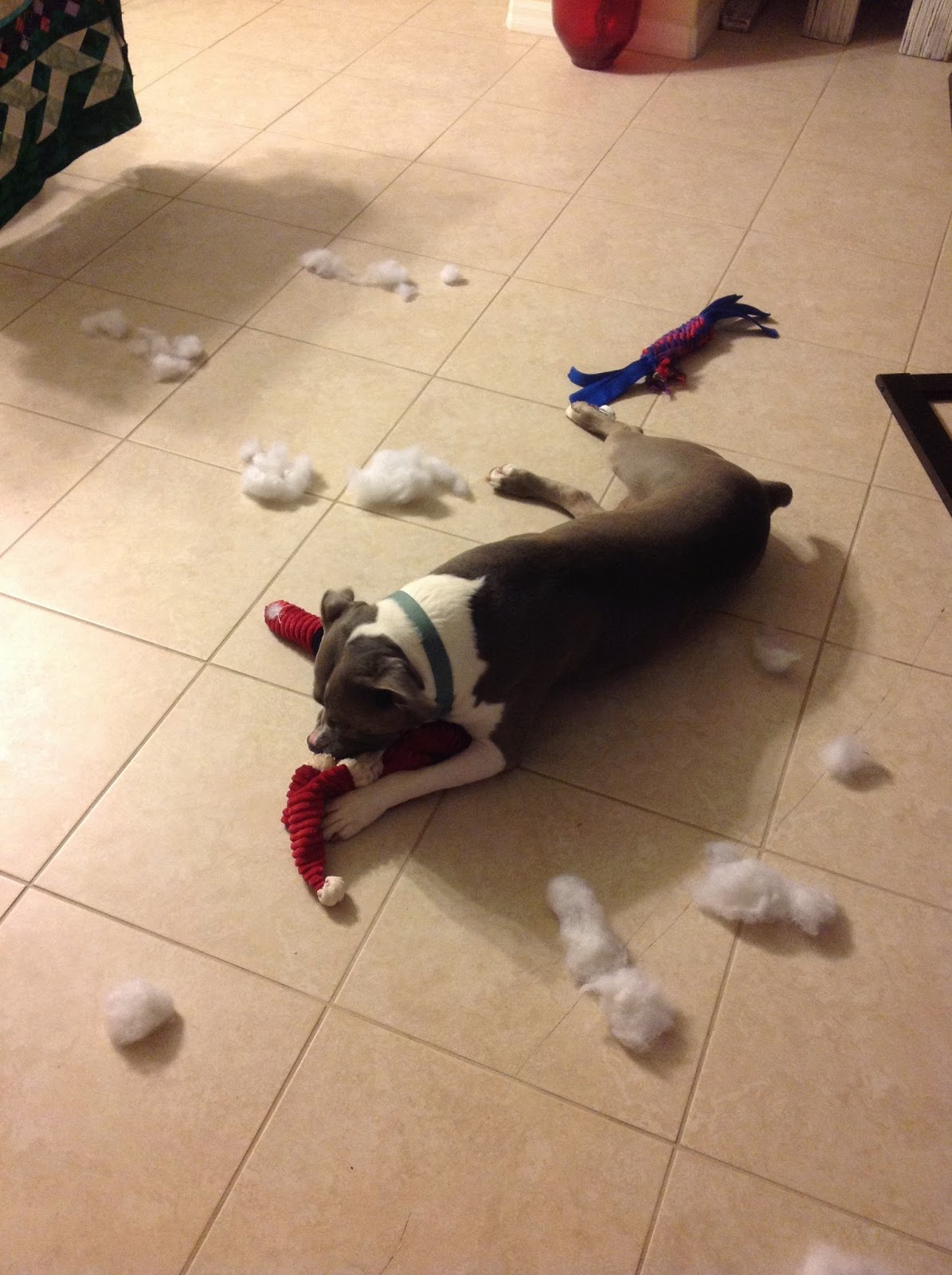 He killed Santa in a few days.  About 3/4 of an hour total toy time.  The rope toy you see beside him has no tails left on it now, and he has started to rip apart the rope section.  His toy time is limited.  But what he doesn't know is that within a day or two, he will be getting SUCH a cool toy, an indestructible one that he will love...  I can't wait!

This will be my January goal, so I can sneak it in under the wire at Sew Bittersweet Designs for A Lovely Year of Finishes 2015!

Posted by Sandra Walker at 2:03 PM