Santa's Still Throwing Up Christmas All Over the House

With 3 days to go, I am pretty much as ready as I'm going to get...Christmas dinner groceries yet to shop for, one last set of squares for which to make the marshmallow topping, an old family favourite recipe, Marshmallow Fantasies.  Oh.  And a queen-sized quilt to quilt.  The flimsy was finished on Saturday, the backing got assembled Sunday and Monday amid other life requirements, which, as you may recall include having Santa throw up Christmas all over my house (Dayna says she did not say "barf up") as both daughters, grandson, MacGyver and me are all here in Kingsville for Christmas for the first time (small squeal of excitement)...and so it goes, sewing and decorating slowly.


I pinned this to my Pinterest page for house decorating ideas probably 2 years ago.  I decided to try to recreate it.  I'm pretty pleased with the result!  Dollar Store fake twigs (which, by the way, I discovered on my walk with Rocco the other day, are exactly what Burning Bushes look like right now!), Dollar Store craft paint, wine bottles (the most enjoyable part of the process, ha) and some gold ribbon.

I made my own stencils, just printed out a J and a Y from an Old English-style font, and cut it out with an Exacto-knife.  For the snowflake, I made a beautiful one out of paper and then realized I needed it in stencil form, like the reverse image.....nvm I know what I mean!  So using a pencil, I drew the outline of a simple snowflake very lightly, and then, holding my breath, trying to be steady, I went over it with red paint and a very fine paintbrush.

I bought a red towel at the Dollar Store, $1 as opposed to $3 or more for a fancy Christmas one, and used a leftover strip from Brady's stocking to decorate the towel.  I had the red tea towel with an appliqué project in mind...didn't happen yet, so I used up more of the leftover strips from his stocking and the cushion cover I made and decorated the tea towel.
The weather is not cooperating, as anyone who lives in the northern US and Canada knows.  El Niño is to blame, and I am totally okay with that!  Outside of one day where this happened:
One week earlier, we had a high of 16C/61F!!  And this happened:
Yesterday it was 10C/50F again and tomorrow we are supposed to go to 14C/58F!  Crazy.  Love it.

I won't be posting again until, well, not sure exactly when.  On Christmas Day evening, we are FaceTiming with Brianne and Brady, and that is when we are going to tell Brady that he is coming here for 8 days!!!!  This is the conversation I'm imagining:

Me:  Oh Brady, I so wish you could come to Nana and Grandpa's house for Christmas...We miss you so much.
Brady:  Yeah, me too, Nana. I wish I could dive through my iPad and land in your house. (he will probably mime diving through his iPad, as he has done in the past on more than one occasion)
Me:  Wouldn't it be cool if you could hop on a plane tomorrow morning and fly here?
Brady:  Uh huh...I would like that very much.
Me: Well, Nana and Grandpa have done that!  You and your mummy are going to get on a plane at the airport tomorrow morning and fly here!!  For 8 whole days!!
Brady:  HUH?!!  Really??
Me:  Surprise!
Then we all will be laughing and cheering and jumping around...well not MacGyver, man of restrained emotions...but Dayna and her boyfriend will be here when we FaceTime and Brianne and MacGyver and I have been DYING with excitement to tell Brady for a couple of months now, almost spilling the beans on several occasions...it's going to be an awesome Christmas! 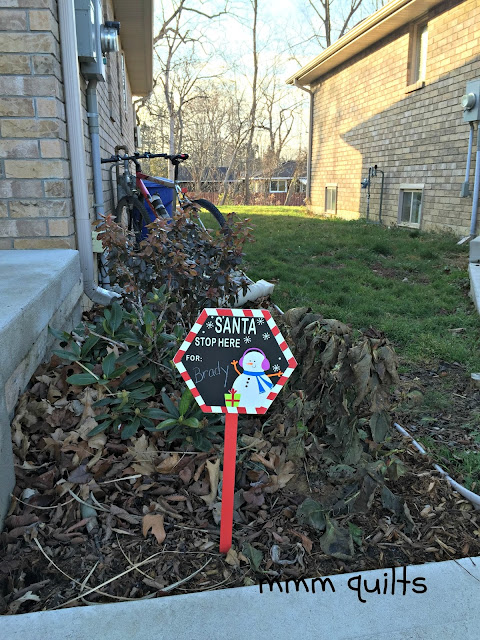 I've been meaning to get a photo of this little sticker in the yoga studio bathroom, but I don't usually have my phone on me.  I did the other day.  It is very appropriate at this busy, busy, often-stressful season: 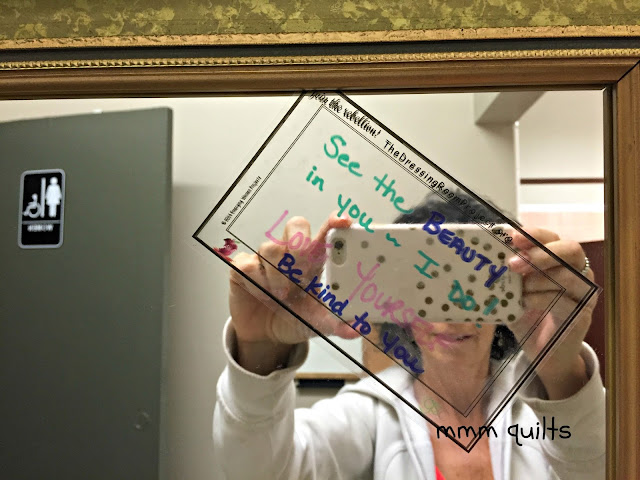 Merry Christmas everyone, and remember to be kind to yourself as well. :-)
Posted by Sandra Walker at 9:06 AM