While we hunker down like it's mid-January here in Canada's southernmost town, I have a little humour and a couple of "how did that happen?" stories for your day.

I've said a few times now how much I love my Steamfast mini iron that I bought from Craftsy.  My only complaint was that the cord got in the way; I also mentioned the need for a cordless mini iron...anyone know if such a bad boy exists?

Anyhow.  In Florida, my ironing board orientation is against the wall with plug to the left of the board.  If I had a left-handed iron, bahaha, there would be no problem with the cord...if I was left-handed, again, there would be no problem with the cord interfering.
So this particular morning there was not good light for me to iron the black binding onto a black border of this placemat.  At this point in my young life, I need light, and lots of it!  I realized, well, duh, I was standing in the light from the window. 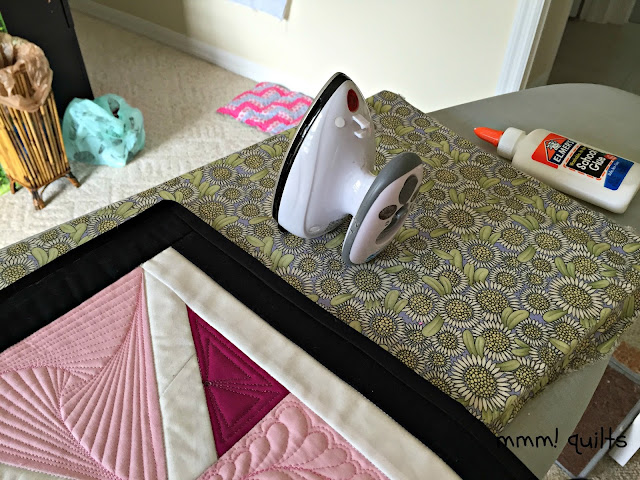 What if I went on the wall side of the iron, so I would be facing the window, and thus I'd get better light?  Yes!

The cord is now on my right because the wall is now at my back, and so the plug is now to the right of the iron...it has taken me two winters to figure this out?

Welcome to my menopausal melon moments.....

What are the chances...
So you also probably know that the one magazine I subscribe to, and have done for practically two decades, is American Patchwork & Quilting.  There was a glitch last year in the subscription renewal, and I never did receive two issues, the February and the April ones.  I called, and they sent them out to me; I did not receive them.  I called again, they said they would send me them out a second time, nope, didn't get them.  When I called a third time to say the issues never did arrive, they said they wouldn't resend them, and I should find out from the post office what had happened.  We all know how that ended up, right?

Fast forward to last fall at the retreat I went to.  A lovely girl from Michigan who has never missed a retreat yet was in attendance, and, on the last day, she spread out several magazines and said, "Help yourself."  She was sewing at the table directly behind me, so I stood up and wandered over to see... NO WAY!!"  There was the American Patchwork & Quilting April issue!  Um.  IN the packaging?!  She said a friend had given her a subscription but she never had time to read them.  No...sadly, she didn't have the February one. 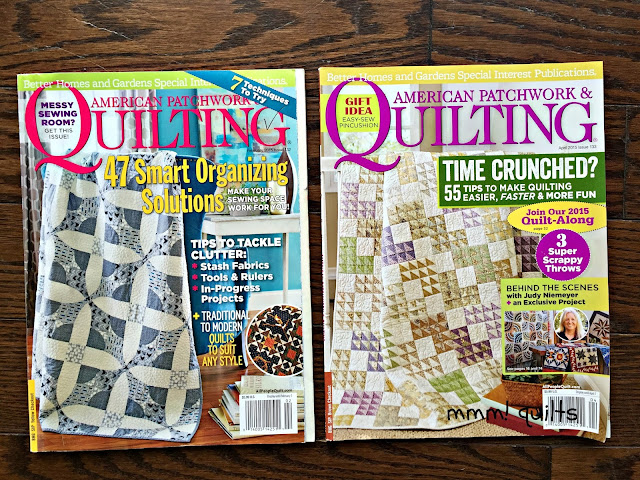 Fast forward to the quilt show in Venice I went to in March.  My friend Nancy and I were mindlessly leafing through a box of magazine bundles the guild was selling for $1.  I thought, what are the chances, I mean come on, these are in bundles of five, 'mine' could be buried and I'd never know it, and what's more, I'm not going to spend the time trying...and stopped going through the box.  Turned to the box right beside it.  NO WAY!!  Right there, I mean first in the pile, was a bundle of AP&Q and the top one of the bundle of five was February!  SOLD!  I gave Nancy the other four as I didn't need them.  She was happy and I was ecstatic! My collection is complete.

How has this happened?
You know my one and only quilt pattern that is for sale for FREE in my Craftsy shop?  Well, I got a rather sweet birthday present: for some reason, on April 3 (the big day) and April 4 combined, I 'sold' 700 copies!  I have NO idea how this has happened, but sales ever since have been several times the regular daily downloading rate.  Just yesterday, I 'sold' 425 copies!  How did this HAPPEN?!!  I checked with Melissa, the affiliates coordinator, and she doesn't know, but she thinks somehow it has been shared somewhere on social media... It's at the 1644 copies downloaded at the time of typing this post, just shy of 100 downloads already today--!!!!!

A little sewing finally happened...
I joined in with Jennifer of The Inquring Quilter, Stepping Stones quilt along.  I knew I wanted to make my quilt similar to her first one, all neutrals.  I was able to get everything cut this weekend, and get a start on the HSTs.

I'm not totally caught up on my homework for the Rainbow Scrap Challenge 2016 at soscrappy yet, but I did make my Whirling Stars block in the April colours of orange with a hit of brown or black.

One final way to warm yourself might be to treat yourself...It's your last chance to grab some deals at Craftsy's weekend clearance sale.  It ends at midnight tonight, and there are still lots of amazing deals to be had...I happened to find this batiks mystery fat quarter bundle box that contains 20 fat quarters for the unreal price of $32CA. There is regular quilting cotton for this same great price as well.  That works out to about $6/yard which is a STEAL of a deal. I find these bundles or mystery boxes a terrific way to add some fabrics I would otherwise not buy; these have then found homes in various projects and added a bit of a 'je ne sais quoi', a smile, a surprise for me, a lift, to said project.

Laughter at myself, comic relief, and temptations happily provided for free! Have a great week, and stay warm!
Linking up with some fun parties on my sidebar and on the Linky tab up top.
Posted by Sandra Walker at 8:35 PM