Pieced mainly as a leader/ender project, here is row 2 for the RSC2017 Migrating Geese quilt, my project #2. 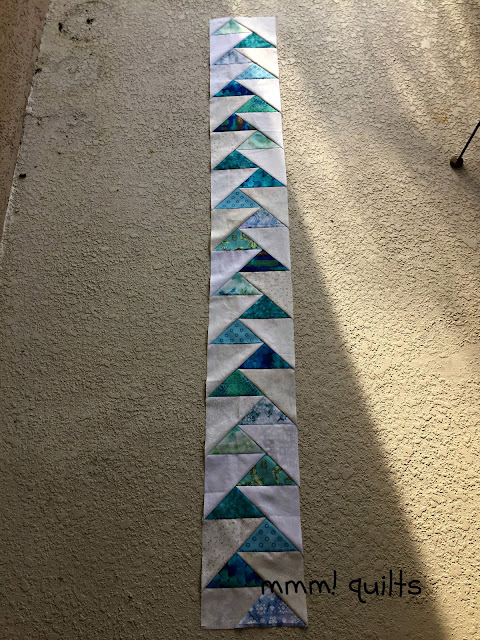 Scraps of the size required, 5 7/8" squares, are not easy to come by when you do not have a lot of aqua scraps, period.  Therefore, three of the triangles were cut as half triangles of that size square.  There's a bit of the Meadow Mystery in this strip, a bit of a fabric my sister Wendy gave me from her first cruise to the Caribbean, a bit of Tula, a bit of the quilt that occupied the first 12 days of February, about which I have only hinted, and a very old marbled piece from a Magic Tiles quilt, etc...
I am going to have to organize these strips a bit because I was thinking it would be fun to have one row of geese migrating north and the other south because, well, obviously, that is what geese do.  However, I do not want the triangles lining up, so I have to make sure to start adjacent rows with a triangle on the opposing side.  One row will begin with a triangle on the right, the other row with a triangle on the left.  Confused?  I know what I mean and that is all that counts, right?!

I listened, twice, to "Canada's Storyteller:  A Tribute to Stuart McLean" on my CBC app while I pieced this row amongst my other projects over the past couple of days.  I am still choked up about Suart's death; how could he go in two months after announcing he was taking a little break to pursue a second, different treatment for his melanoma after the first one wasn't successful?  And only 68.  I used his stories with my grade 7 English Language Arts (ELA--English teachers, like quilters, love their acronyms) and my grade 9 Honours ELA classes.  The listening tests I made up for "Toilet Training the Cat" and "Christmas Presents" are still used at the junior high where I taught.  It was a wonderful connection with students who were familiar with the Dave and Morley stories and whose families listened regularly to "The Vinyl Cafe" on CBC Radio 2 at 9 am on Saturdays, repeated on Sundays at noon on CBC Radio 1.  I enjoyed the musician guests, many up and coming ones that Stuart would highlight; I loved the Arthur Awards, and lamented with my mum that there will be no more, and my eyes brim with tears as I type this.  For those who don't know, the Arthur Awards were given to people who did random acts of kindness, nominated by a recipient or observer of that kindness.  Those shows, usually featuring 3 recipients, made my rose-coloured glasses view of the world glow hot flamingo-pinky-orange.  Such wonderful persons from coast to coast in Canada.  Stuart LOVED his country and illuminated, but in a quiet non-boastful way, through humour and poignancy, what it means to be Canadian.  I am saddened that within a little over three months we have lost two icons of Canadian culture, Leonard Cohen and Stuart McLean.  Yet I am grateful, so grateful, for such a wealth of a legacy that they leave behind, and so very very thankful that I was able to see both of these talented creative souls in concert.

A little aqua crept in to my Honey Pot Bee blocks for the month of February.  Here we have Star Kisses and Quilter's Pantry Block. 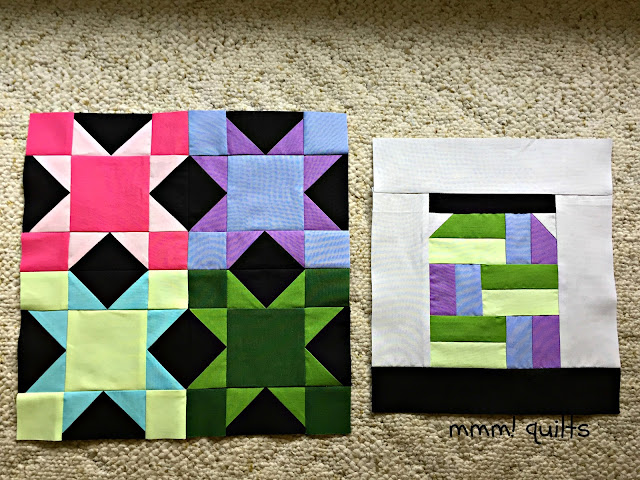 And here are all the blocks so far.  Not really a fan yet, to be honest, but time will tell.  I keep wanting to add a print, but the challenge (to myself) is to do this entirely of solids. 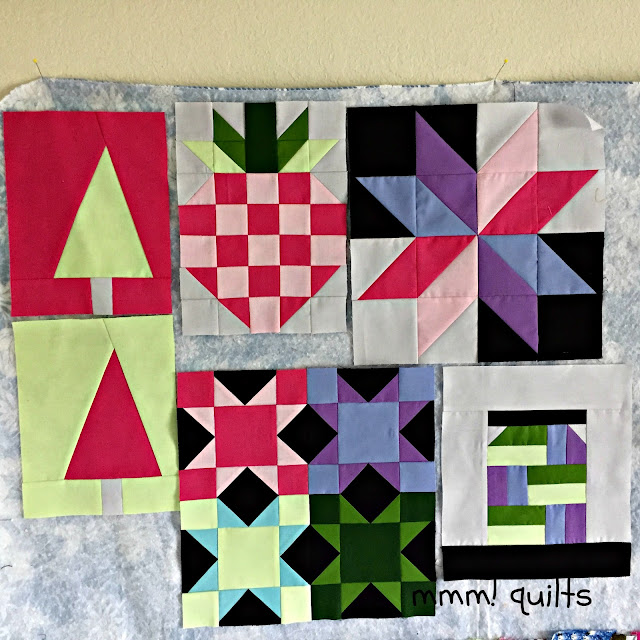 We are beginning week 8 of the #30quiltdesignschallenge.  As of the writing of this post, there are 122 designs in the hashtag pool!  This challenge, to create 30 quilt designs, ends on March 15, so we still have nearly another month.  Here are my latest two, which, I realize, incorporate their fair share of aqua! 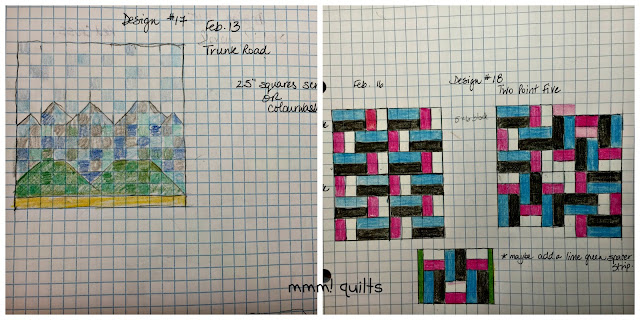 Trunk Road was sketched on the way to yoga (don't worry; I wasn't driving), just an image I had in my head of the Canadian Rockies.  I'd finished Merle's Door the previous day, and because so much of the book takes place in Wyoming and the US Rockies, and I was still living in the book in my head, specifically in the Rockies.  I wondered vaguely if I could create a landscape scene using only squares and HSTs...not bad!  This comes from travelling the Forestry Trunk Road in Alberta, basically from the Alberta/Montana border to just north of Hinton, Alberta.  We spent many a happy camping trip over many years of trips here.  This scene is from my mental image of a spot in the southern Alberta end of the Trunk Road, wheatfield or perhaps hay stubble in the foreground, foothills rising beyond and the Rockies towering beneath a blue Alberta sky, Ian Tyson's "This Is My Sky" playing in my head.

Two Point Five, a reference to the 2.5" strips I would use to make this block, is playing around with the Quilter's Pantry block I created for my jar.  Note that I put the lime green strips I thought to make version B easier to piece, on the wrong sides of the block!  I've been intrigued with playing with plaid, so I think the woven look to this stems from that.  So far both attempts to create an overall plaid design quilt have been epic fails, ha!
Linking up with
soscrappy