Pink and Mint are the new Christmas Red and Green. I couldn't be happier. Don't get me wrong: red and green and gold as well are still right up there in my Christmas colours cupboard, but there is something about this combo, with a little silver bling for a punch, that I love. I showed you the flimsy that was a near-fail a few weeks ago. I'd not followed my own tutorial instructions closely enough, and had incorrectly oriented the large tree blocks. The mug rug would have been rather tall and skinny as opposed to a nice rectangle. However, all was not lost as I had the idea to add the sashing strips as a frame, and voilà!  A new spin on my Leaning Tree mug rug. You can find the original tutorial here.

Both of these have been given away (it feels awkward in my lingo to say 'have been gifted'), one to one of my yoga students who knitted me a pair of yoga socks (they're da bomb), and the other to a person who reads this blog, so mum's the word until they arrive. The pink and mint poinsettia fabric is an old, er, vintage one from Hoffman that I love, not much left of it now. The other pinks and mints and the burgundy are leftovers and scraps from other projects. Wait, the crystal-looking green one used as sashing and binding in the top mug rug is a fat quarter from JoAnn that I picked up a couple of years ago. 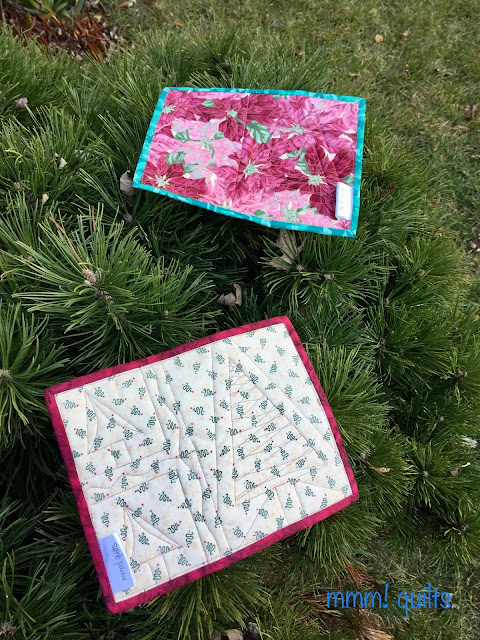 These mogul pines make a very Christmassy backdrop don't they? This was pre-snowmageddon a week ago. You'd never know it today though; it's nearly all gone. Used my mmm! quilts labels from Ikaprint of course. No affiliation (but buy through Lorna of Sew Fresh Quilts, as I did, if you wish to support a blogger), great labels and great service.

I used Sulky Holoshimmer threads again to quilt these with both my walking foot and free-motion foot for FMQ. It's so difficult to show off the sparkle of this thread which is flat like a ribbon. 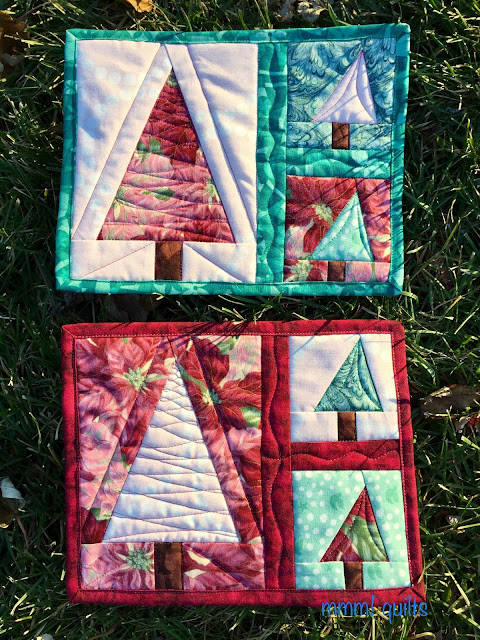 I laid them on the grass to catch the later afternoon sun and so this does give you a better idea.

Two tips when sewing with this thread: 1) use a Metallica needle (I like Schmetz) and, 2) feed the spool horizontally, set up away from your machine. 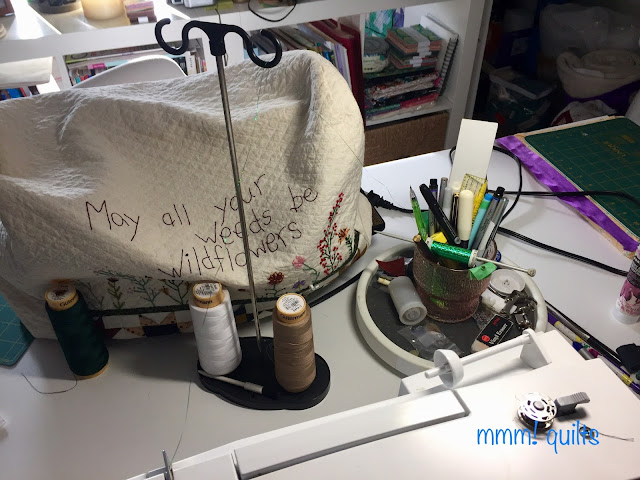 I set mine in a former candle holder jar, using a knitting needle on which I feed the spool, like a toilet roll holder. Then I feed the thread up and over my stand-alone thread guide, keeping it flat the entire time, and from there into the machine. Tip #3, shoo the cat away. Repeat if necessary. 😼

Here's an inside, 'working' photo! 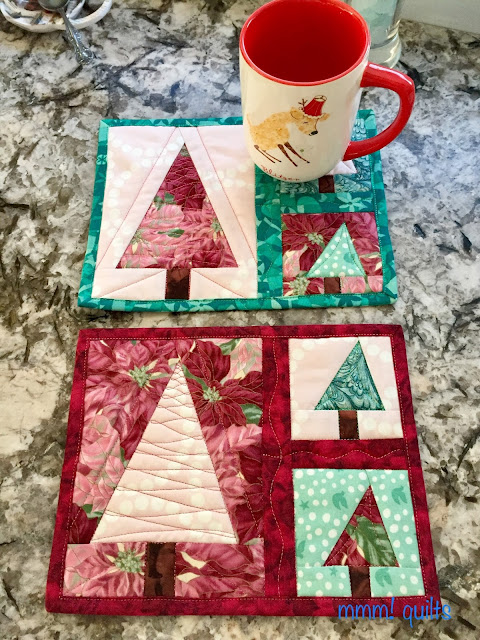 You also see the shimmer of the thread in this photo too, and that they are rectangular, not wavy, lol and lie flat!

Do you notice the beach glass in the vase at the top of that photo? Well I put some more to work, making another bowl. I'll write more about the process in another post. This one is quite large, 9.5" diameter but only 2 3/8" high. 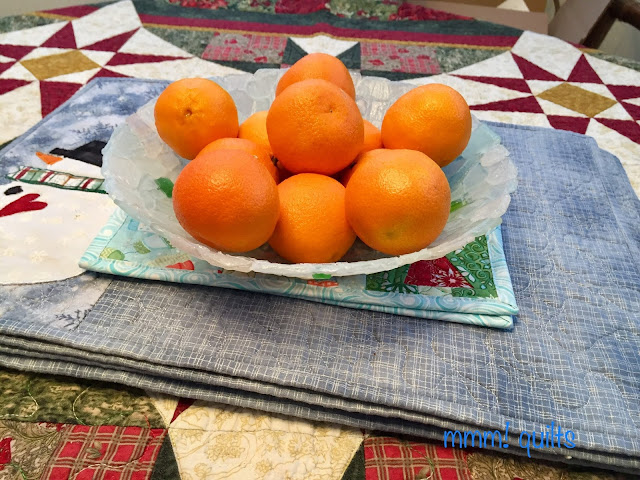 Below, it was nearing completion. I love the various shades of the beach glass, white, several shades of seafoam, mint, light pinkish/purplish, green, and very rarely, brown. 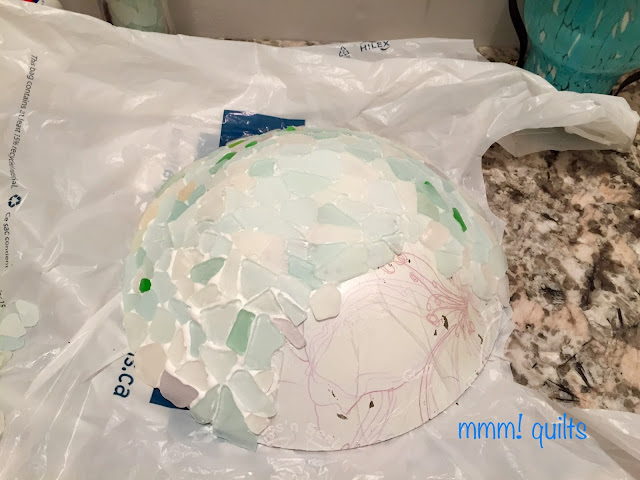 You use another bowl for the mold. This one I tried what my friend Elaine suggested, Press 'n Seal. I was trying to avoid the creases I got when I used Saran wrap on the first one. It did go quite a bit smoother, but the bowl was larger and not as sharply slanted too. However, I got the imprint including words and dimples(!) off the Press 'n Seal. I'm sure it will come out with the Dremel. I must say these are rather addictive, like a jigsaw puzzle!

While I was in Florida, MacGyver did the tiling for the backsplash. 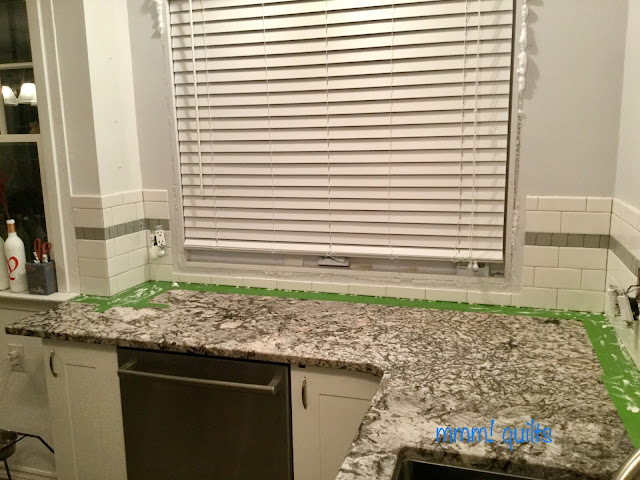 He did such a nice job! All the grout is done now. He put spray foam between the window and frame to seal it up (previous owner had this one installed and it was um a tad drafty) and then he'll put up the casing. He's building some shelves of reclaimed barn wood on the sink wall, once he does some recon to find the wood he wants.  Pretty soon I'll give you the before and after final tour of the kitchen.