Well in this shiny baubles and twinkling lights season, what has attracted your attention quilt-wise? For me, it was a trip into JoAnn's where, instead of heading straight for the Christmas decorations task at hand, I meandered through the sports teams fleece and cottons and just at the end of the section were a couple shelves of... no way! Harry Potter fabric.  And Game of Thrones! 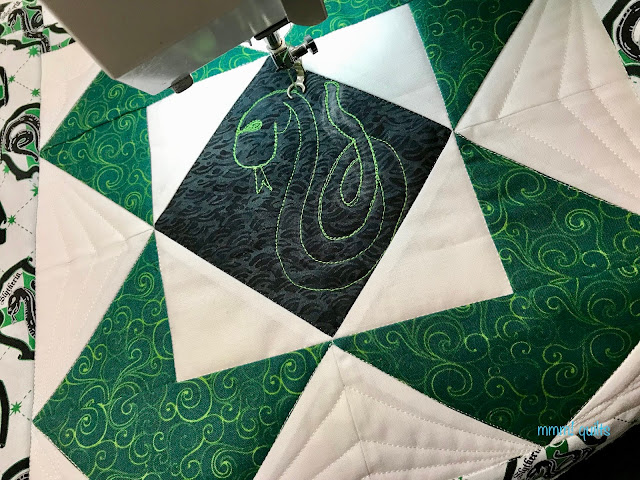 According to the Sorting Hat at his daycare when they had a Harry Potter-themed month a couple of years ago, Brady is in Gryffindor. However, he likes Slytherin and Draco, he said to me.  So I picked up a yard of fabric for him, and since Brianne is a huge lover of Game of Thrones, a yard of that for her. Oh I didn't forget Dayna either, but that's another story...
I believe I've mentioned that I work well under pressure. It forces me to concentrate and block out extraneous distractions and temptations. Rather ironic, isn't it, that this squirrel, aka distraction, helps me block out other distractions?! I went to my 150 Canadian Women quilt for a block inspiration (it is amazing how many times I've used that quilt in this way. This is Block 109. My only complaint, if you can call it that, about the QAL is that Kat never gave the real block names.

I rummaged through the stash and scraps and found a good green from Connecting Threads, left over white from a Benartex project and the black batik from Brady's parents' wedding quilt. Fitting. The block and frame of Slytherin fabric went together in no time. I knew I'd do dot to dot in the white, swirls in the green, but hmm, the centre? 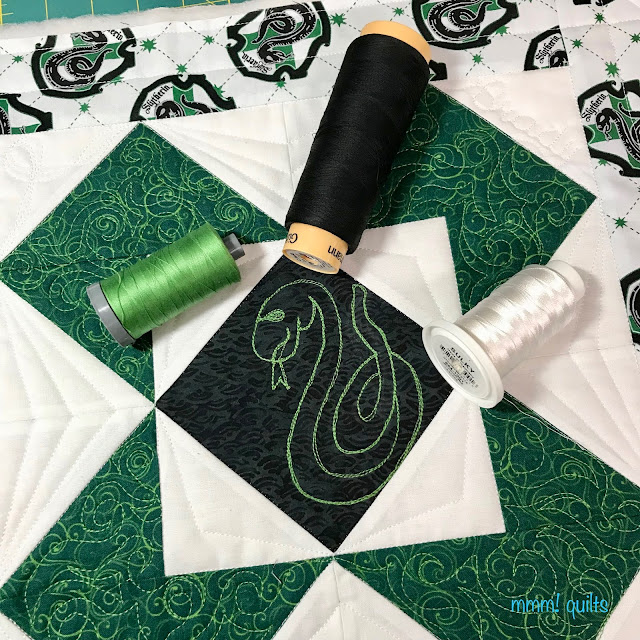 I love sewing because I go into a meditative state, much like any artist when they're creating, be it music, painting, writing, etc. Of course it would be a snake. I'm no artist when it comes to drawing, but I'm relatively decent at drawing if I have an image to copy. So I used the snake in the fabric, drew it with a favourite Clover chalk pencil, and then FMQ-ed it on my Bernina, going over the design three times. 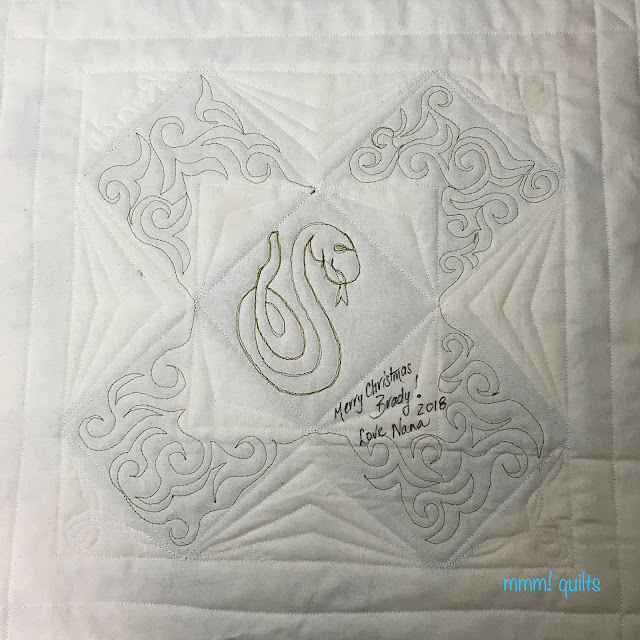 Not sure you noticed that I quilted in Brady's name in one corner of the white background. Yay for outside shots on Christmas Day at Brianne and Brady's in powdery fresh snow.😄 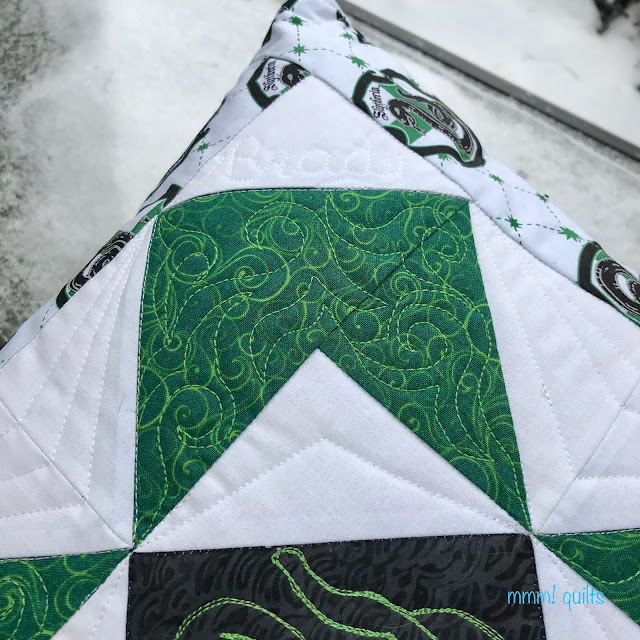 My initials are in the border as well. Here's the finished cushion, which he just loved: 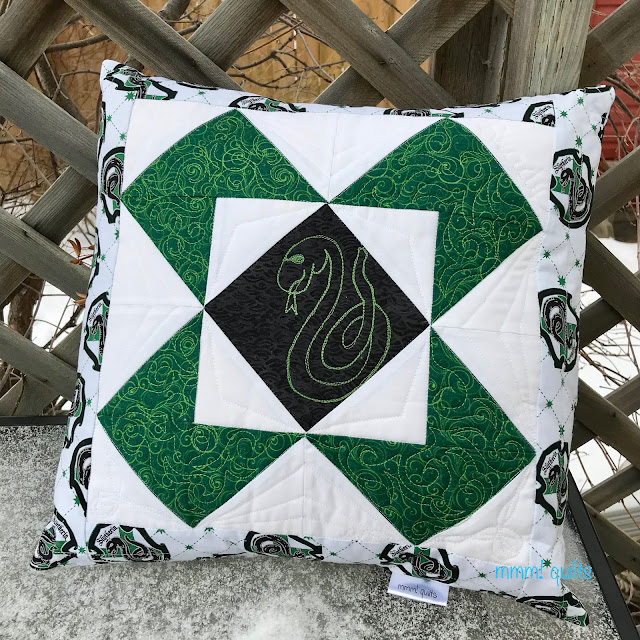 Because I made both of these cushions in less than 24 hours, I didn't do my usual binding edge, just flipped them inside out with the usual envelope backing. 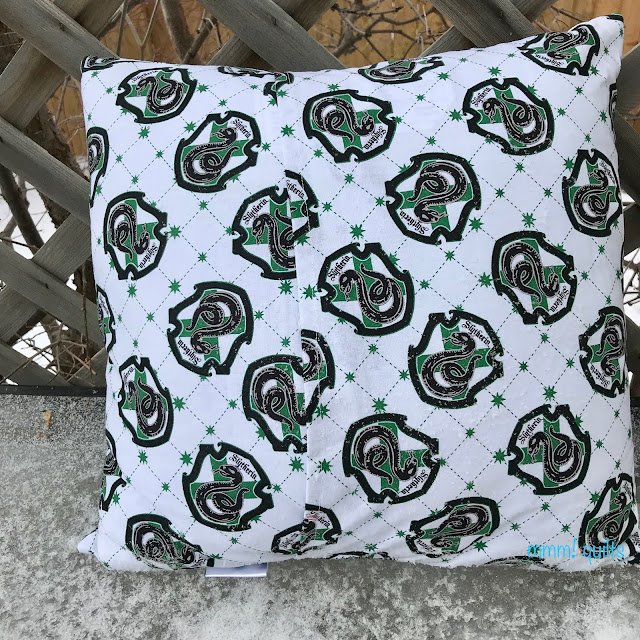 I was pleasantly surprised with the look! Because I have two more to finish for Q4 of the Finish Along, I may be turning to this quick method in the very near future. Brady was over the moon with this; he immediately popped it behind his head (he was sitting on their couch when he opened it), leaned back and said, "Ah! This is just perfect for when I read!" He raved about the snake too. This is a child who truly takes his time with presents, and fully appreciates and takes in each one. He is one amazing little (ha, not so little these days, Nana!) boy.

You may recall from my previous post, that Brianne, my non-loving-quilts daughter, requested quilted placemats, but basic, not quilty placemats but quilted. I delivered in spades. So I thought her cushion needs to be minimalistic too, not quilty. I searched Game of Thrones symbol, and got a 7-stripes image. Each stripe has a different gold crests on it, but I did not have time...so basic it was.

More rummaging through stash and scraps to get the right tones. 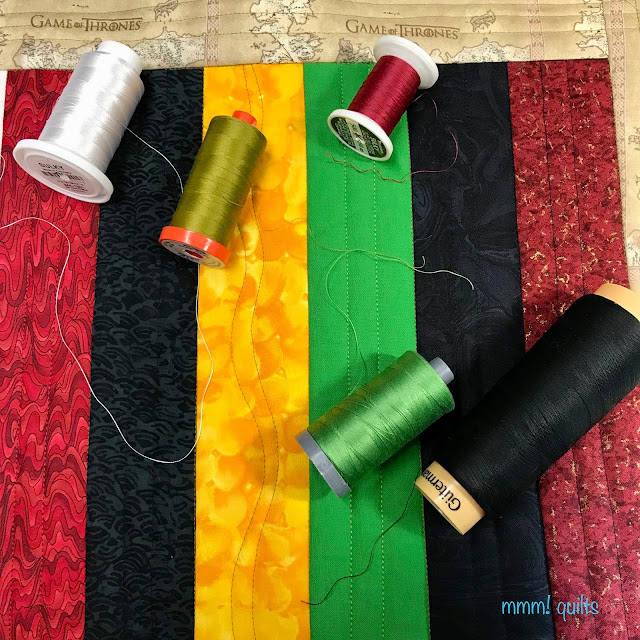 There is white to the left, not shown. I didn't want it all in solids, wanted some texture, so just used one solid, Kona Leprechaun. It was a bit tricky but a good challenge to find two rich reds and two slightly different blacks. I like how three of the threads, the black Gütermann cotton, the Aurifil 28-wt green, and the Sulky white rayon I used on Brady's cushion. 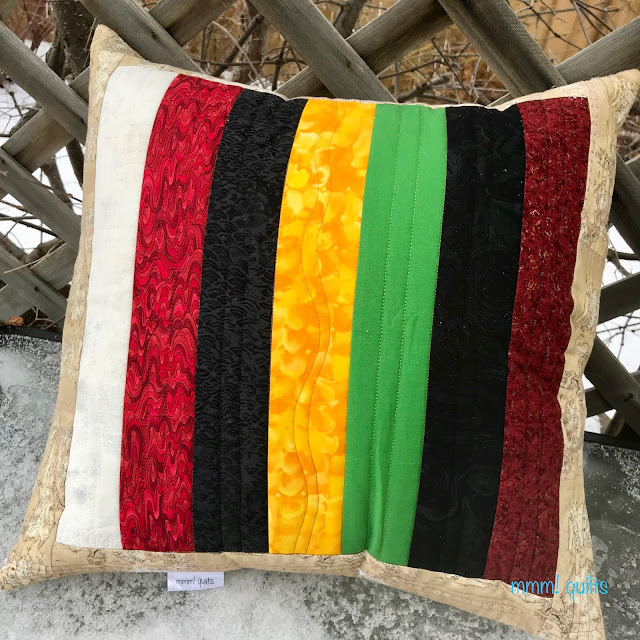 Here it is on Christmas Day! She liked it, not as much as her placemats, but she was pretty enthralled with Game of Thrones fabric.

Here's the back, same finish as Brady's: 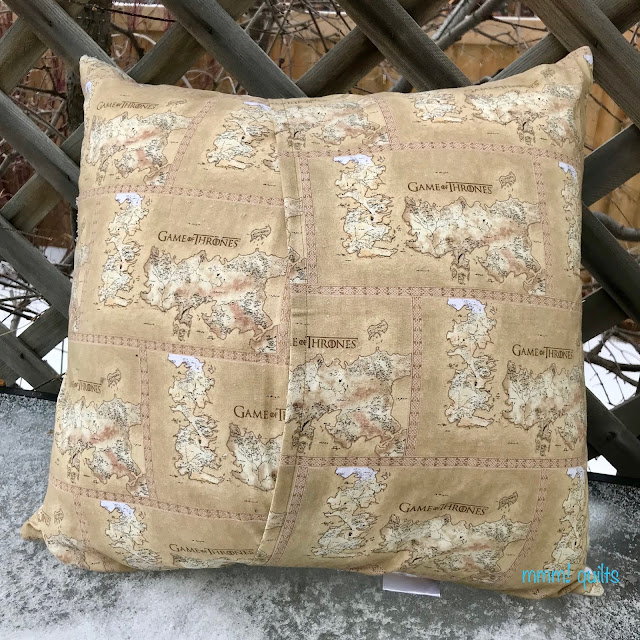 Hers finished at 18", a little bigger than Brady's, which was 16". I forgot to take a photo of the inside of the front, drat, but I wrote on it too, as I did for Brady. I'll add the stats later because this needs to publish in the next five minutes to make the email-out (at least I think 10 am EST is the deadline.

And I'll show Dayna's and tell that little story in another post! She and Tyler are coming over in a few hours to celebrate Christmas with us, (yay!) so I have rather a lot to do, and her cushion or, pillow, to use American English (and lots of Canadians call these pillows too, but I think a pillow is bigger, what you sleep on, and a cushion is smaller what you rest your back or your head on) is not ready to show yet.

I also will be back within a couple of days to let those of you know what we will make in the little QAL I'm going to do with my blogger bundle I put together for Bernie at Needle & Foot. 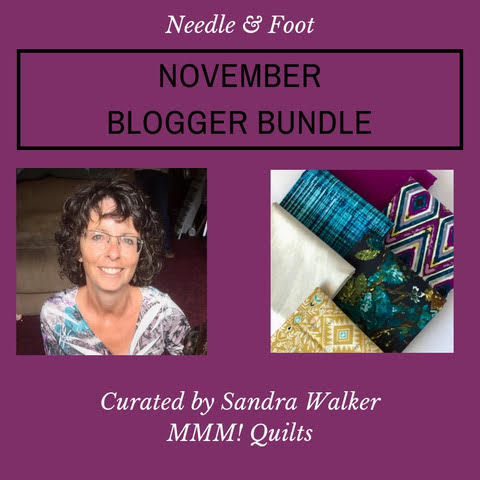 Okay! Link your squirrelly projects up below. Remember this isn't necessarily a finish linky, or a WIP linky, but a linky for projects that tore you away from your regularly scheduled programming, er, quilting, I mean! They should be a finish, though, because that's the point, that you dropped everything to make this THING you HAD to make, right?!
Hope this linky works, as I used the new widget...