This month is jam-packed with gratitude, which is good because it's had some angst as well! I link this monthly post up with LeeAnna each month at Not Afraid of Color where you can find many other like-minded peeps writing about likes and loves. It's a weekly linkup but you join in whenever you want.

1. I like Cuba. A lot. I loved our trip there the first week in March. The media gives it, like so many other things (pitbulls, immigrants) a bad rap, and I have a post planned to help put these not-such-a-great-country thoughts in the BZZZT! Wrong! category.
Both MacGyver and I were pretty much speechless, me with a big ol' lump in my throat, at the beauty of the beach in Varadero, which we had almost all, miles and miles of it, to ourselves:

It was the first time we've ever stayed in a resort. It was nice to be pampered! I wish they'd had more Cuban food, but MacGyver said he ate some of the best pork and beef he's ever tasted (and he's a carnivore so he'd know), and I loved the Cuban yogurt, especially the drinkable kind! I also loved the way they do their butter pats!

Our maid was sweet on a few occasions and took extra time to fashion the extra blanket on our bed. 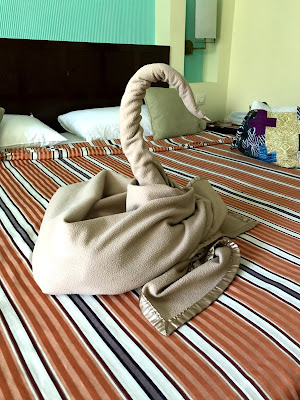 2. I like PBS. My mum did too, and was an avid supporter. I watch them as much, if not more than I watch CBC. Recently, I learned about The Blacklist, a list that screenwriters want to get on! Basically it's a way for budding screenwriters to get in contact with filmmakers. Kind of like a place for budding quilt designers to get in touch with magazines! I was surprised to learn that several recent Oscar winners have come from this list, only two of which I can remember, "The King's Speech" and "Slumdog Millionaire" both of which I've seen and loved.

3. I like Jann Arden. I've seen her twice in concert and she is AWESOME. She has a new show, 'Jann', on CTV. I've watched the first episode, and it was freaking hilarious. Rufus was quite taken with it too!

4. I just finished my sixth book of the year, Full Disclosure by Beverley McLachlin. It was really good, so good, in fact, that I read it at breakfast, lunch, and then sat with my afternoon tea and finished it, when I should've been pedal to the metal finishing up my Island Batik March challenge flimsy. Here's a sneak peek: 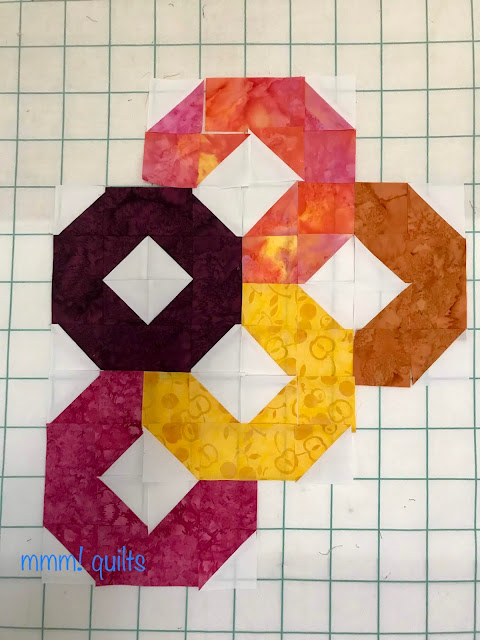 5. I cannot say enough about how incredibly intense these batiks are!! I love seeing something I sketched on graph paper come to life! This is my Design #1/30 in the 30 Quilt Designs Challenge that I'm hosting in a private Facebook group this year. If you want to join in, there's plenty of time, just email or message me with your first design and I'll invite you into the group.

4... (I interrupted myself there, ha) Anyhow back to the book. I found out about it on International Women's Day when CBC did an article, 15 Canadian Women We're Looking To This International Women's Day. Beverley was the first woman Chief Justice of the Supreme Court of Canada, and the longest serving chief justice in Canadian history. She only retired in 2017, and this is her first book. It's a very good read, about a young criminal lawyer. I went to my library site and put it, and another, a YA (Young Adult) one on hold, Ayesha At Last. It's written by Uzma Jalaluddin, and has already been acquired for film by Hollywood. I really like YA Lit.

5. Speaking of my library, when I went to pick these two books up, they'd switched out a couple of my quilts, so I took a photo. I like seeing my work displayed like this! It's quite a rush, and I think, 'wow, I did that?!' 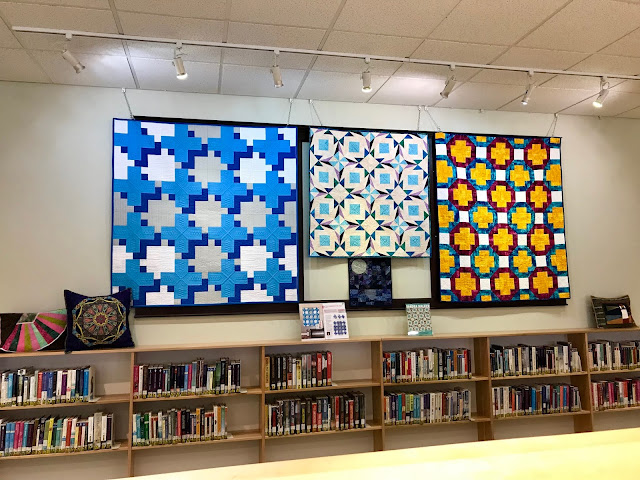 And, guess what? They've asked me to return in the fall as a guest artist.

6. I love seeing the spring flowers popping up everywhere. We've had daffodils up for a couple of weeks, but no buds yet. These snowdrops I spied a week ago, and just this week there are bunches of adorable small yellow flowers in my neighbours' yard. I think it might be Winter Aconite, but I'll have to ask her. Here are the snowdrops. We have a grassy, woodsy lane down the centre of our neighbourhood loop that goes straight down to the lake. 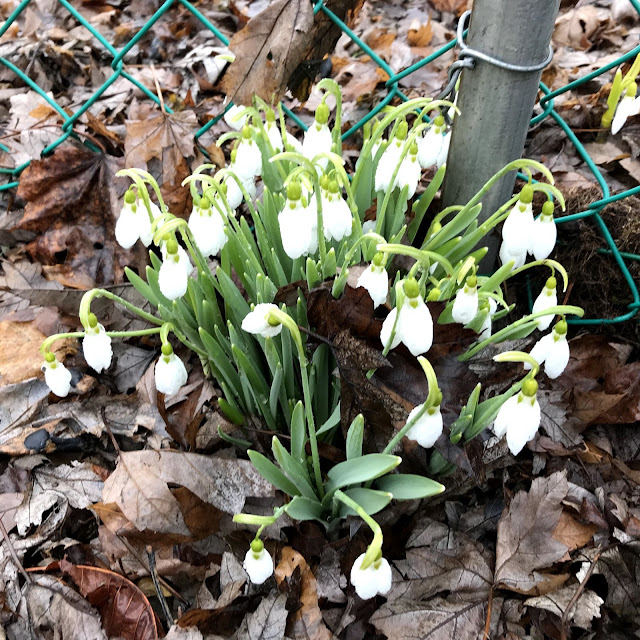 7. I love Lake Erie. A few days ago I took my latest quilt finish down to the end of my street for a photo shoot. I soaked up the sights and sounds of the water, in the sparkling sun. 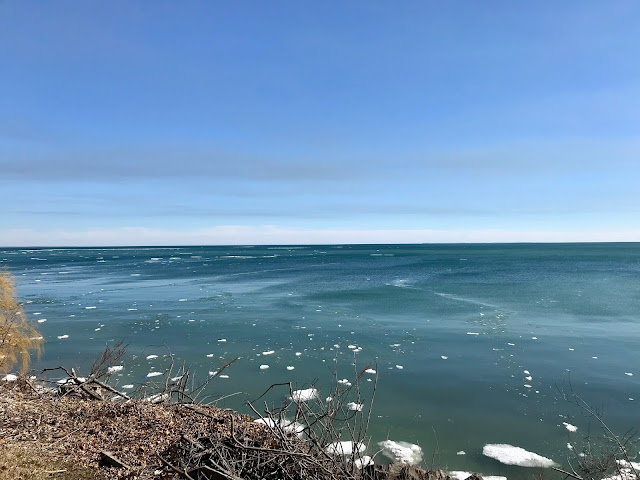 Isn't that a gorgeous colour? Those are chunks of ice bobbing around, the latest we've seen ice, but then February was a brutal month.

8. I have a post started on quilt inspiration. I find it everywhere. Last weekend we went to the Fox Theatre in Detroit for a Jimi Hendrix tribute evening, a Christmas gift from Brianne. We thought it would be a tribute band, but no, it was a collection of big name artists paying tribute to Jimi's work. I'm not a fan, but my husband is. We were blown away by the theatre, and by the huge names that performed: Jonny Lang, Taj Mahal, Joe Satriani, Los Lobos... and on and on. It was mind-blowing, both artists and venue. 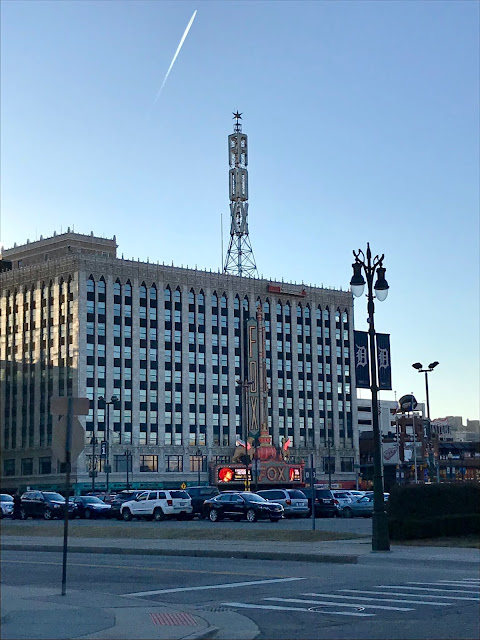 It was also ear-blowing... I said I should've worn earplugs and MacGyver scoffed at me, but even he said it was too much for his ears by the end! It took until after lunch the next day for my ears to lose the cotton wool feeling. Haven't had that since we saw Melissa Etheridge back in the late 90s.  The theatre was originally built in 1928, and fully restored in 1988, and it is breathtaking. 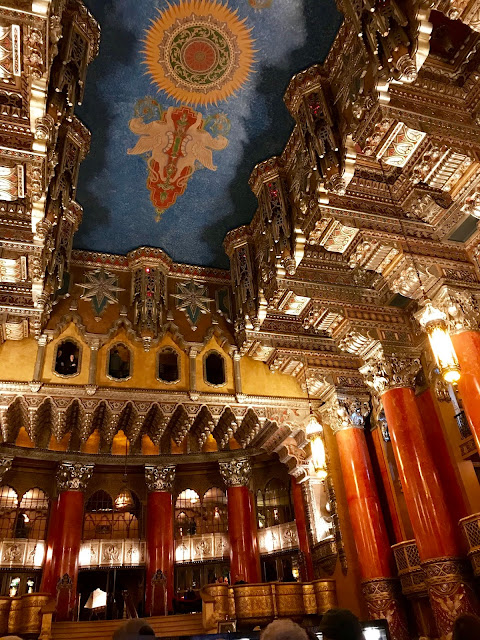 I think I could go to ten events here and still see new things each time. I wasn't the only one taking lots of photos of my surroundings! Stay tuned for the inspiration post.

Linking up as well at:
Whims and Fancies
Posted by Sandra Walker at 7:18 AM