Welcome to Throwback Thursday! On the first Thursday of each month either I or Andrée of Quilting & Learning - What a Combo! host this. It's for the quilts you made before you started blogging. Write up a post telling about them and link it up here. It's rather amazing the stories that these quilts have to tell.

Mine definitely has a story. 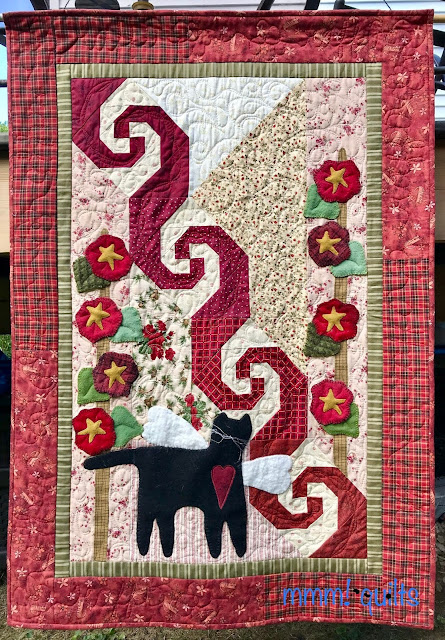 This is a quilt I made as a memento of my darling cat, Raffi, who lived to be 18 years and 2 months old. She was the most amazing cat.
Our first cat was Floyd, named after the band, Pink Floyd. He was an outdoor cat, and he moved with us when we left Ontario in the summer of 1989 to move back to Alberta, primarily so that our little girls, aged 1 and 3, could grow up with their nana and grandpa and cousins. It proved to be an excellent decision; my parents were the very best grandparents. Sadly, that fall, Floyd disappeared, and we found him one day, dead, in the neighbours' no clue what had happened to him, not a mark on him. Well, that Christmas, Santa Claus brought two kittens to our house, one white, one black.
If you think she looks pretty tiny, you're right. On Boxing Day, within less than 48 hours of having her, I was on the phone with the emergency vet, asking what to feed a kitten who didn't seem to know how to lap milk or water or eat wet cat food. I ended up driving in to Edmonton to buy kitten formula from them, and fed her with a tiny dropper for the next couple of weeks. They figured she was only about four weeks old, and sadly, they said, it happens all too often. A litter not ready but the people know they can get rid of them easily because of Christmas. It's amazing that bumbling me was able to nurse her through that time. But she thrived, and she and I bonded like no other animal I've had, well maybe Rex. But Raffi and I were just attached. I used to do a Relaxation tape that was 30 minutes while the girls were having their afternoon nap. I'd lie back on the couch, Raffi on my belly, and we'd relax, me nodding off right at the spot where the woman on the relaxation tape got to relaxing the neck every.
single.
time,
and tiny Raffi, purring and snoozing curled up on my belly.

She was an indoor/outdoor cat. I was not a fan of a cat inside, didn't want to have the litterbox smell (don't worry; I've learned you just clean it regularly), but Raffi was a well-mannered cat, and she was allowed in at will, though she slept in the garage (how rude I was!) until Dayna got to the age where she wanted to sleep with Raffi, and she would, until I went to bed, and then into the garage poor Raffi would go. She did have a pretty nice set-up in there though. Don't worry, in her dotage, she was allowed to sleep in our house.

We named them WRIF and Raffi; Wrif was all white but for a tiny spot of grey on the top of his head and Raffi was pure black not a speck of any other colour on her. Wrif was for the favourite radio station in Detroit that we'd listened to over the five years we lived in southwestern Ontario, and Raffi was for the children's singer whose songs, along with those of Fred Penner, we listened to a lot. And well, riffraff.

Raffi was a polydactyl cat which means she had extra toes. She had thumbs. At least that's what her paws looked like. I loved that about her. Some say they bring good luck. She had conversations with Dayna and with me in the morning while getting ready for school (Brianne isn't an animal lover), chirping back answers, or asking questions in a chirpy miaow voice. It put a smile on your face first thing.

She loved people's laps, mine, my mum's and my dad's in particular. She decided MacGyver was cool when she was about 12, and would happily sit with him, ON his newspaper, which he had spread on the floor to read! She loved to sleep with the girls, and they told me years later how they'd pretend to cry, so she'd hop off whoever's bed she was on and come to investigate. She was a mama through and through; when MacGyver and I had an argument and voices got raised, if she was around, she'd yowl, as if to say, "Stop! Please, stop!"

She hated Wrif. He got her pregnant at a far too young age....we had no clue what was going on until she seemed a bit fat... We got her spayed after that first litter, and he got neutered immediately. 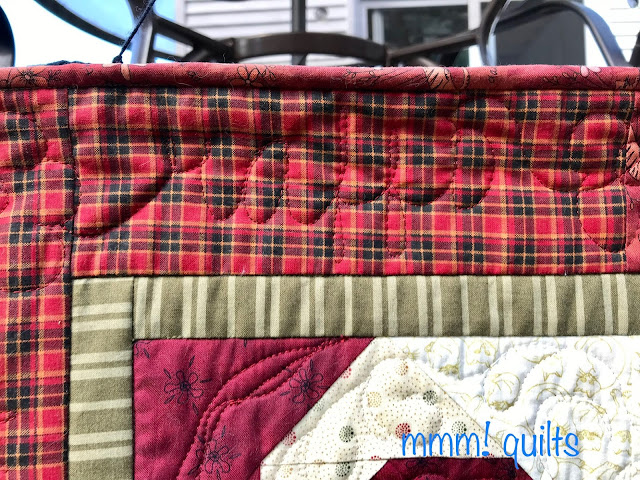 I quilted Raffi's name and flowers in all four of the borders. I quilted this on my Bernina. I'd seen the pattern made up in the local quilt shop in Sherwood Park, Lori's Country Cottage. I knew right then I'd make it for her, and she was still very much alive then! I'd come to realize how much better your life is with a cat. One who is an actual part of your home. 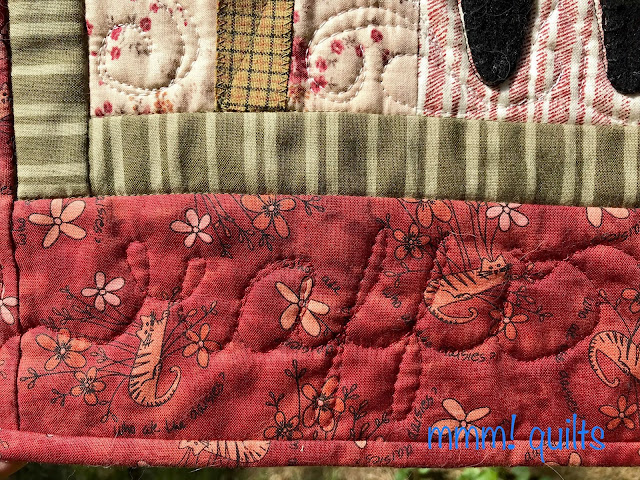 I did all kinds of swirly almost-feathers in the background. They remind me of Kathleen's 'cheater feathers' that I do love quilting nowadays. The red cat print is one from The Buggy Barn. I used it in a runner I made for a retiring colleague, as well as in Cheryl's Midnight Mystery quilt. It's almost all gone now. I'm so glad I used a bunch of it on the back of this quilt: 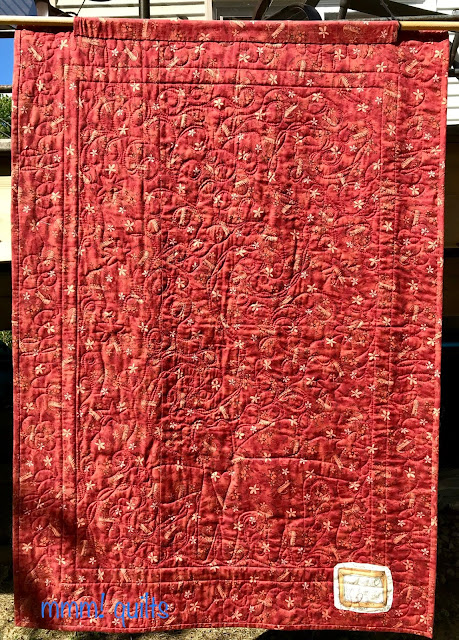 The appliqué is all wool, except for the flower stems, which are flannel. I love doing wool appliqué with a blanket stitch by hand. I did the yellow flower centres by machine blanket stitch though. I picked up a pack of red and green wool squares specifically for this quilt in a quilt shop somewhere in my travels. The black and the white is wool I felted myself when I made and taught a class on wool table mats. It's quite thick. 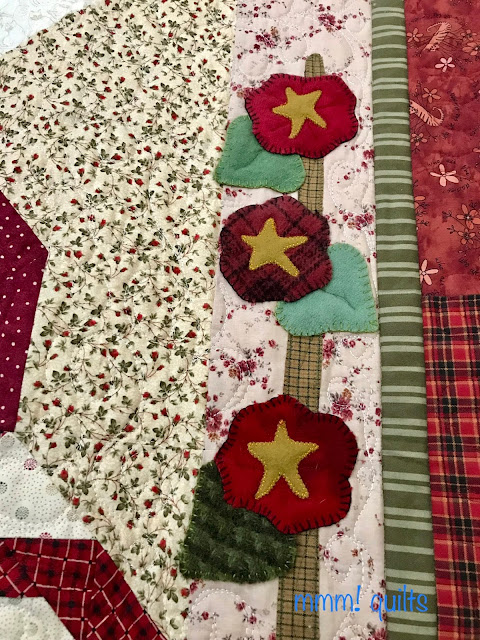 I did buy the tiny red floral print you see here for this quilt, but the other reds and low volume and green stripe is all from stash.

Her whiskers are a sparkly thread. I made a slight change in the background: originally I'd had the cream that has gold kitties on it where the tiny red floral print is as well. It was too much cream, so rather than redo all the red swirling blocks, I decided to cut in the tiny red floral on a 45° angle and fill in the remainder of the right side, as it blended with the tan and red small floral that is the background for the flowers. It makes me think of a ray of sunshine coming down. 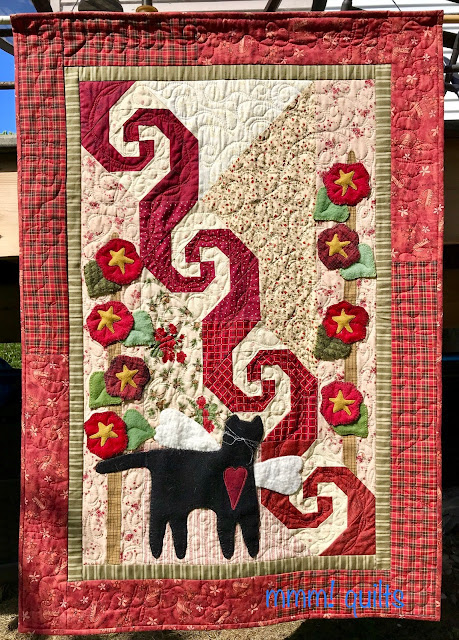 I've never washed the quilt. It hangs in my sewing room, so she is with me each day still. A sewing room, like one's life, is much better when a cat is in it. Bella has taken on that role magnificently, and gets more and more Raffi-like each year. Maybe when she's 12 she'll like MacGyver!

Quilt Stats:
Pattern:  do not know; no longer have it
Size: 28 X 40"
Fabric: cotton from stash and felted wool, both purchased and from stash
Backing: 'Crazy Daisies' by The Buggy Barn for Henry Glass
Batting: Warm 'n Natural
Quilted: on my Bernina
Threads: pieced on my Bernina with Gütermann or Mettler; quilted with Sulky rayons


You are invited to the Inlinkz link party!
Click here to enter

Posted by Sandra Walker at 9:58 AM