One Down, Fourteen to Go 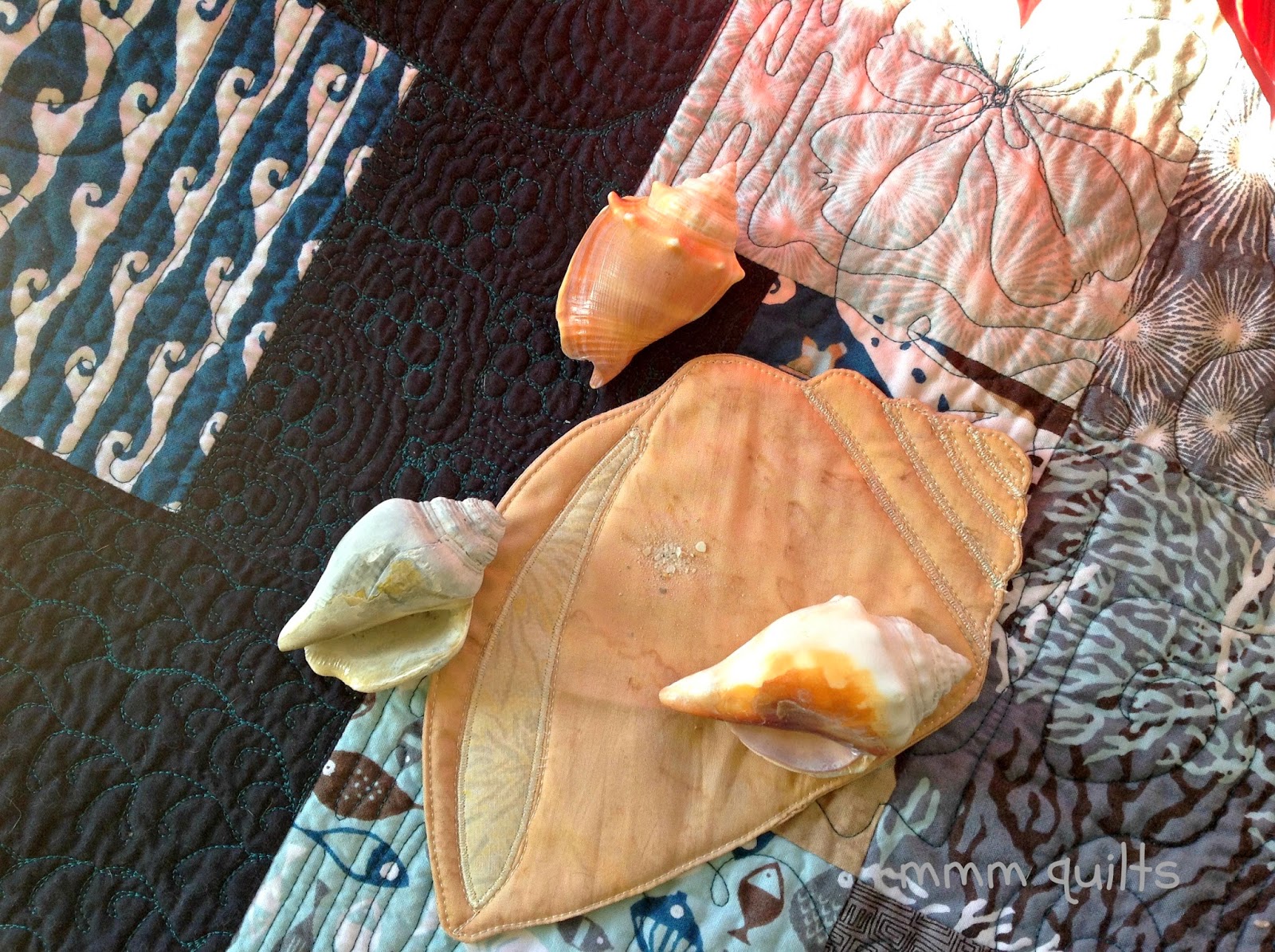 This is another of the projects on my list of eight for the first quarter finish-along.  There are 13 shells and two shark's teeth in the runner.  The pattern leaves a lot to be desired as far as method goes, but the design is great.  Batiks are perfect for the shells' variance in colour.  This one is called a Turk's cap.  Who knew.  They are quite plentiful along the southeastern shores of the Gulf coast. Love the white sugar sand that fell out of one! 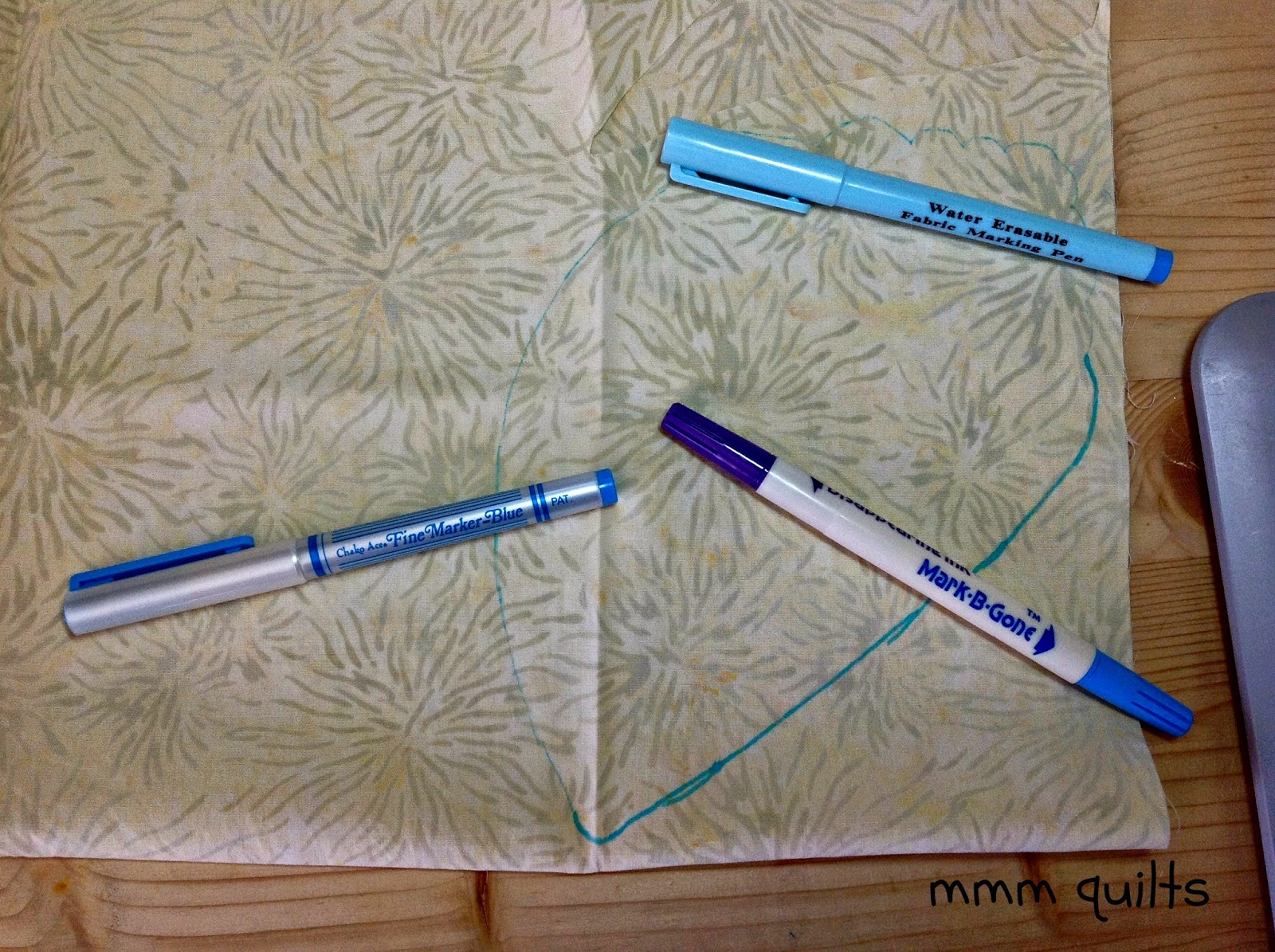 A quick note about markers.  I did a post last year on my favourites here so I won't go into much detail other than to show you the difference in three washaway markers.  I traced the shell pattern onto the wrong side of the batik, and used 3 different ones I have.  I've laid each marker over the line I drew with it so you can see the difference.  I was quite surprised just how much thicker the Mark-B-Gone line was!  There is no discernible difference between the Chako or the Water Erasable one (which I bought form Leah Day).  The only issue with the two über-fine ones is that at first the line is almost non-existent, but it darkens within a few seconds. The urge is to go over it a few times, but there really is no need.  It really is a fine line.

The good news, however, is that each one disappears with just a light spritz of water.  So this is my WIP.  I still have two after this to complete by the end of March.  Three if I pick something for ALYOF.  For this one, you are allowed to have something like a quilt top, or a set of blocks as your finish; it doesn't have to be a fully completed item, so I do have an idea of a project for which I'd like to at least have the flimsy by the end of the month.

I did finish the kitty mats for the Humane Society.  I ended up with three!  I'd planned on making two, but miscounted squares needed and had half of another one done, so a third was born.

Here they are before washing:

Here are the backs: 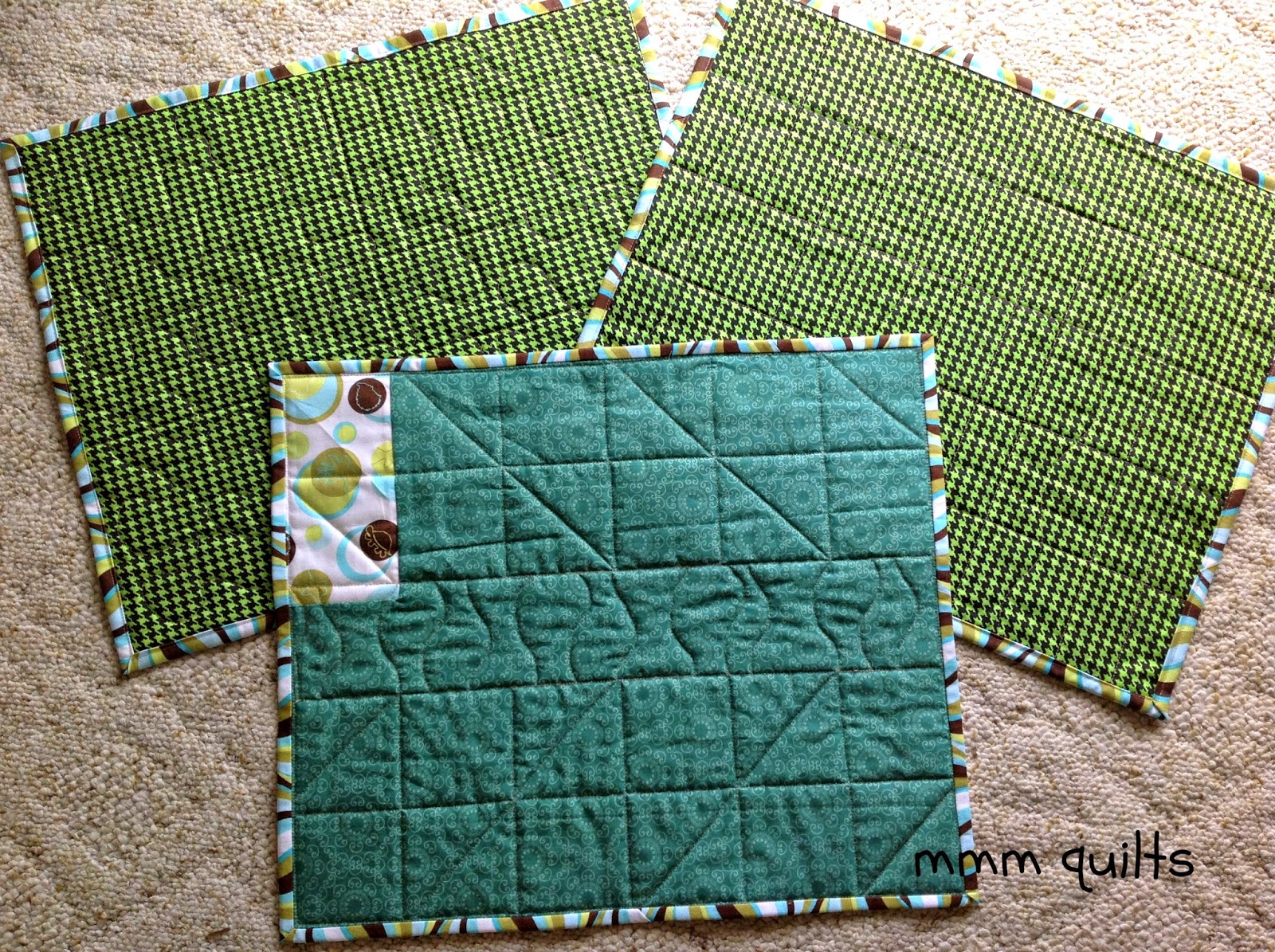 Recognize the houndstooth?!  Leftover backing fabric from Shamrock.  All that now remains is a couple of strips.  Why is there a chunk out of the backing in the bottom mat?  I needed one more rectangle (two squares) for the front, so I pieced in a little extra of the other squares fabric.

This was fabric given to me by my brother (well, when I saw it, I asked for the leftovers!). He and a couple of colleagues did a Laugh-In skit (that's dating us, I know; it ran from 1967-73, but it was mainly our parents who watched it as we were too young) at the office Christmas party and when I saw their set, I fell in love with the fabrics.  I'd hoped to use one for kaleidoscopes, but I don't think there are enough repeats, so it might become another mat.  The Humane Society gives their cats each a mat in their cage on which they sleep or repose, while waiting for their forever home.  I made them a couple last year too.  It's great for leftover pieces of batting.  It's also great for playing with FMQ.  I did both walking foot quilting and FMQ.  Each mat measures 15X18"; the squares were cut at 3.5".

Linking up with WIP and Let's Bee Social; see the buttons on the sidebar.  Speaking of buttons on the sidebar, you will notice a new one, Craftsy.  Thanks to Cyndy at Quilting is More Fun Than Housework, whose blog was one of the first two or three I started following about a year ago, I am now a Craftsy affiliate.  Those of you who have followed me for any amount of time know how much I love the whole Craftsy experience.  It's brilliant.  Reasonably-priced classes that you can watch from home or on the road, anytime, anywhere.  You can replay them to your heart's content, back up the video and replay a section five times in a row if you like. They never go away; they're yours forever. There are loads of free classes and free patterns too, a variety of topics from sewing to knitting to cooking to photography and more.  I've sung their praises for some time now, but if you use the link on my sidebar (I think) or one of the text ones above and  then decide to take one of their classes, I can now earn a little moola!  If you are interested in how to become a Craftsy affiliate, shoot me an email!