This was one of my goals for the First Quarter Finish Along with Adrianne at On the Windy Side.  This makes 6 of my 8 completed.  Here is my list.  Thinking I should've stuck with my original 6, which would mean I am right on track... Note: I made this at the very end of January, but kept it under wraps until very recently...more on that later. This may seem a bit of a repeat post of Sunday's tutorial, but I wanted a simple post as the link to my finish!

Update: Simple post, yes, but the main reason was due to some technical difficulties in Oda May's email.  I did not get the acceptance email until 2 days after I posted the tutorial. I thought it hadn't been accepted, so used it for Cynthia's Oh Scrap! Feature post on me; then when I found out it had, in fact, been accepted, I thought oh no! I have to take the tutorial off, so I wrote up this post (have I lost you yet?!) for Cynthia to re-link her Oh Scrap! Feature, thinking I'd have to delete the original tutorial...and then found out, nope, Moda Bakeshop, unlike magazines, does not mind one bit if you've already shown a project before you submit it to them!  Sorry for all the confusion.  It's all good.

And I think I may have solved the issue with part of the two posts being written in Greek, or Klingon in some people's computer screens.  I inserted the degree symbol from Word, and then kept typing.  I see on the Preview of the post that the font has changed, yet I cannot make it go back to this Arial "Normal" no matter what I do!  It's still in English however, for me, and for several others (wonder if it's okay in Mac, which I use, but not on a PC?). So I am retyping this post, and I will work on retyping the tutorial from March 29.  Meanwhile, either click on the "I Was Featured on Moda Bakeshop" button on my sidebar, or here for the tutorial I wrote up for Moda! Phew! Thanks for staying with me if you did through all that! 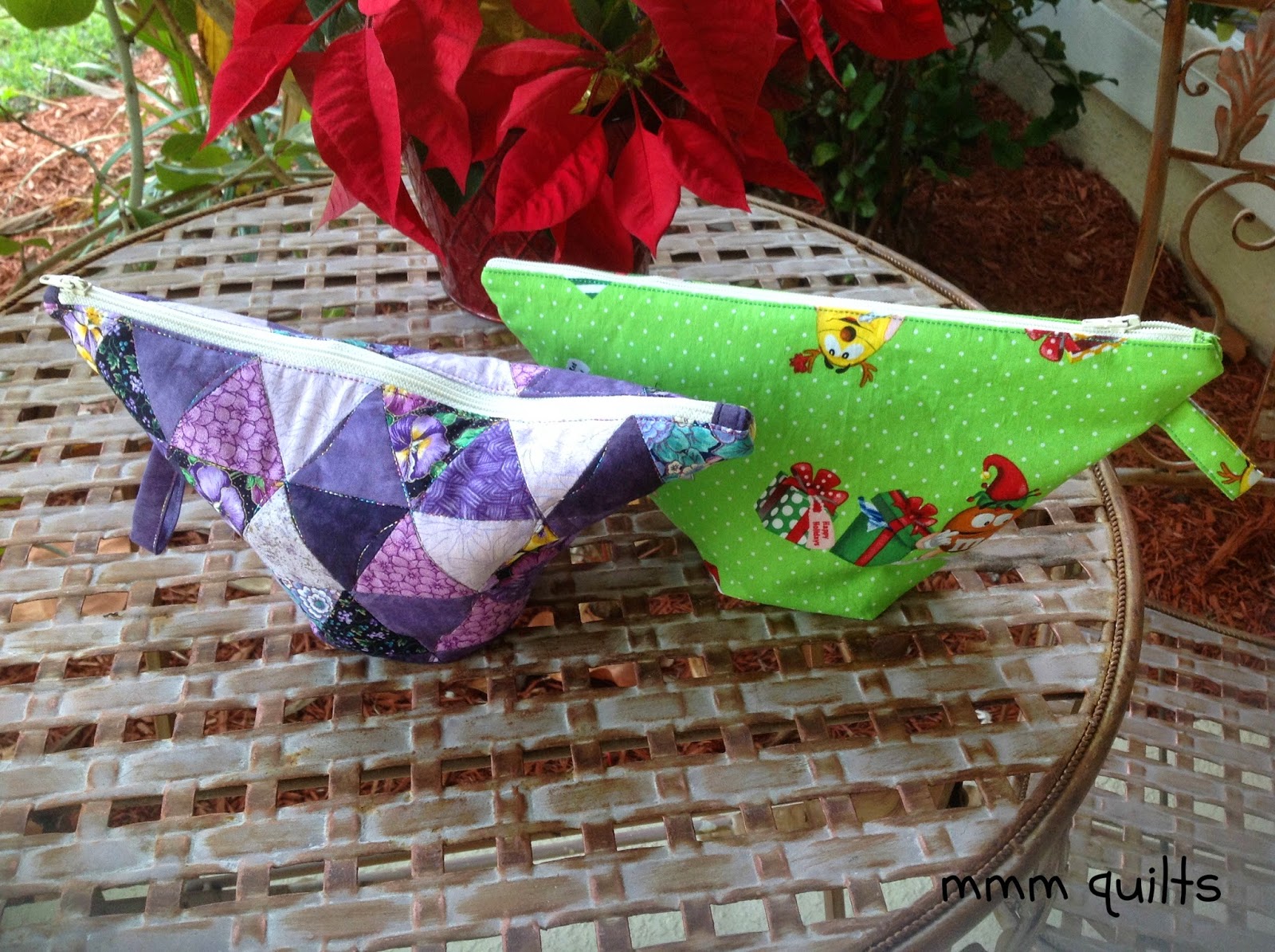 Here are the two I've made.  The purple is the design I had in my head all along; the green is the prototype I made to see if it would work.  Would a bag with this narrow of a bottom and this wide of an opening be practical?  I think so! 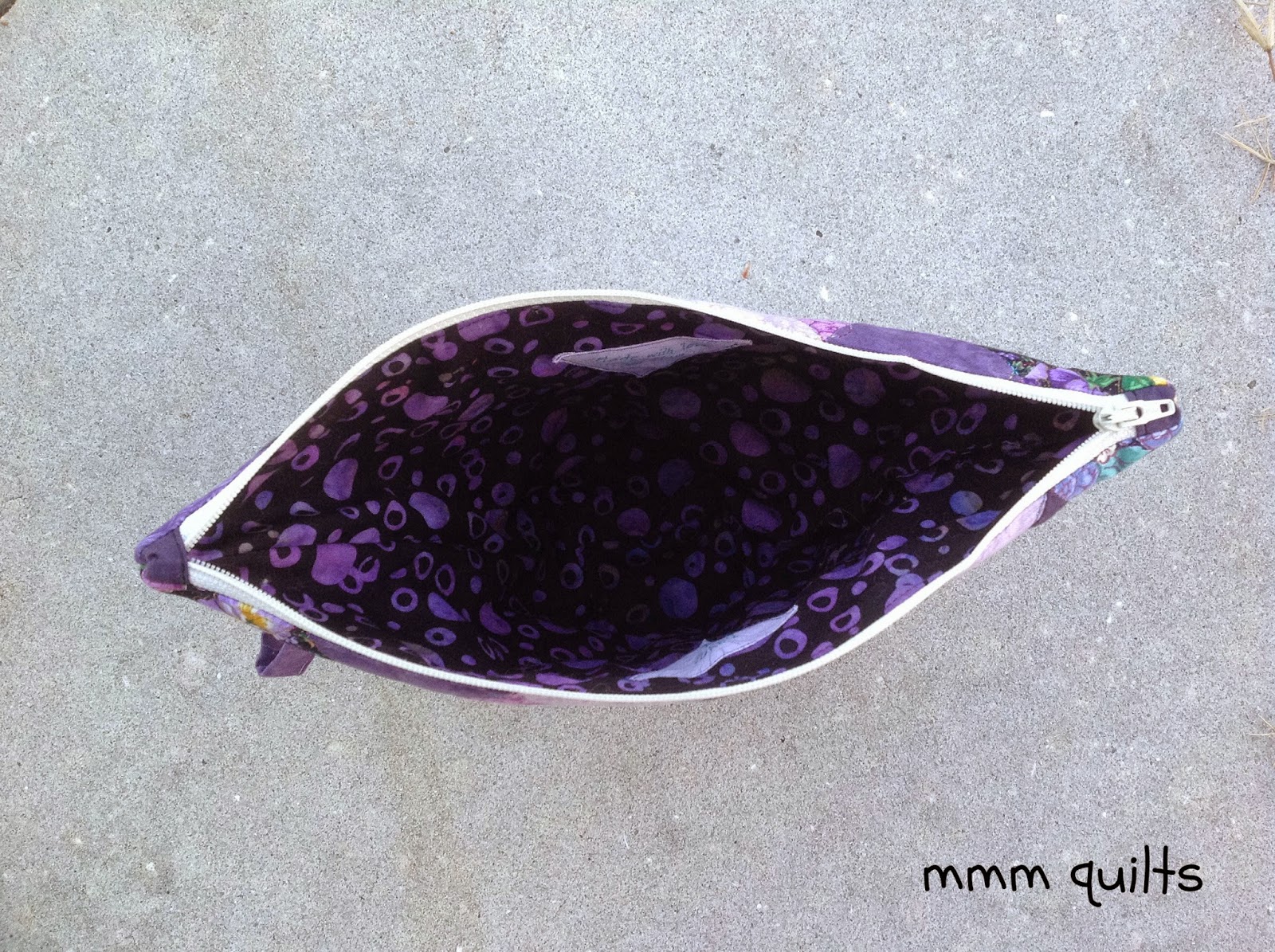 The purple bag is quilted and lined; the lime green has a stiff iron-on interfacing applied to the bag body and lined as well.  The top opens nice and wide to see your crap stuff inside. 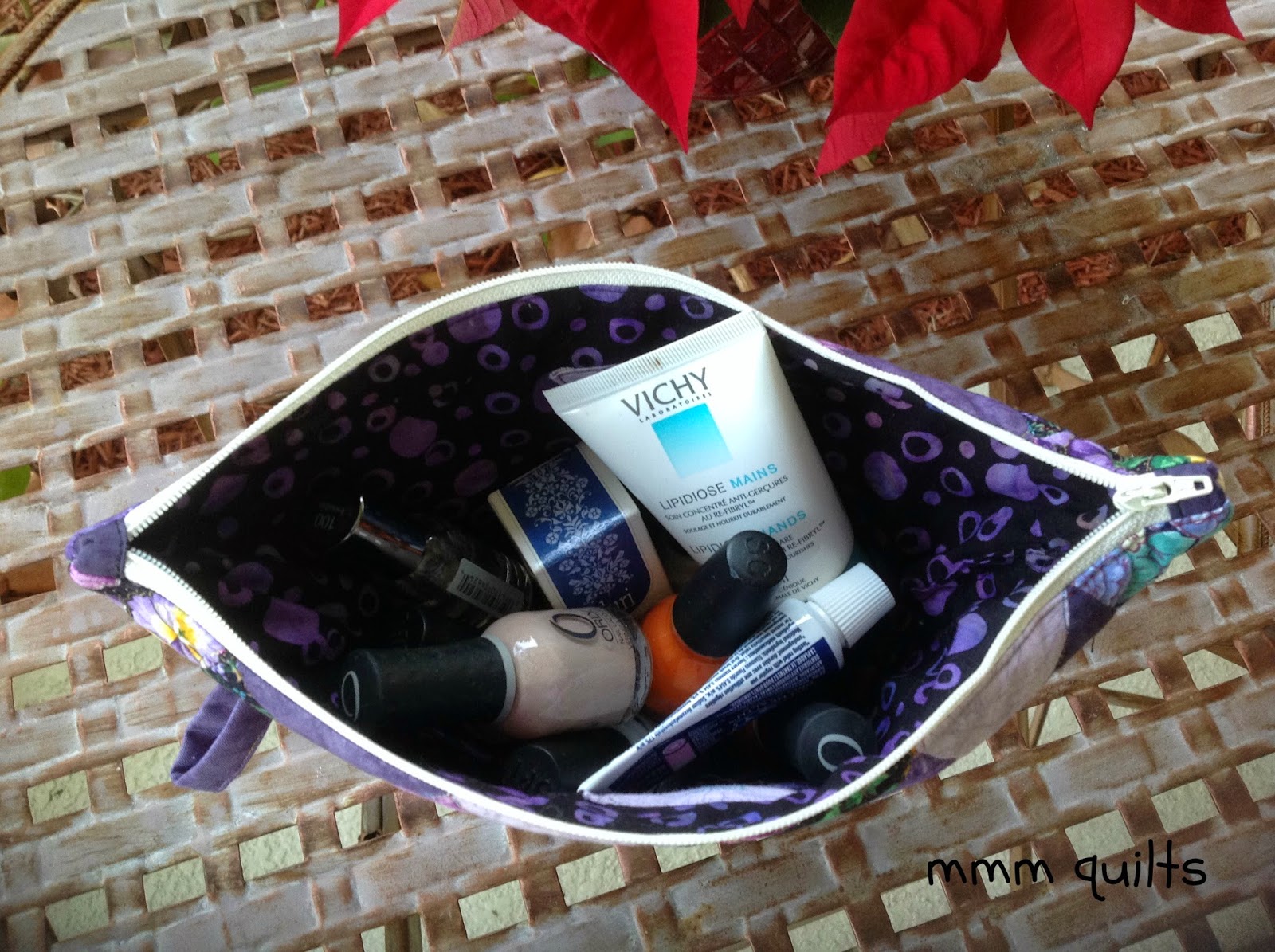 It is made entirely from scraps. 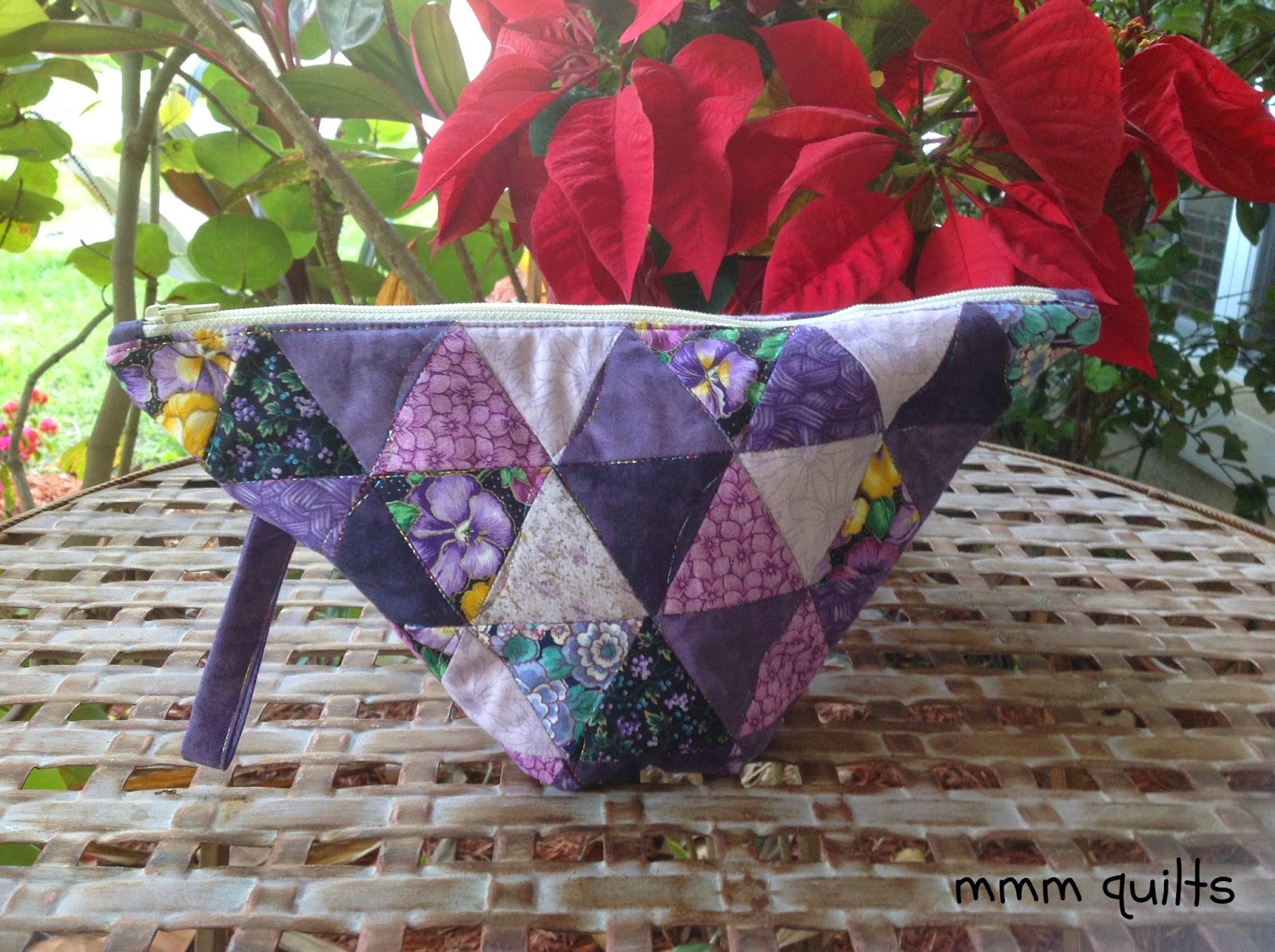 It has undergone intense scrutiny from my QC department. 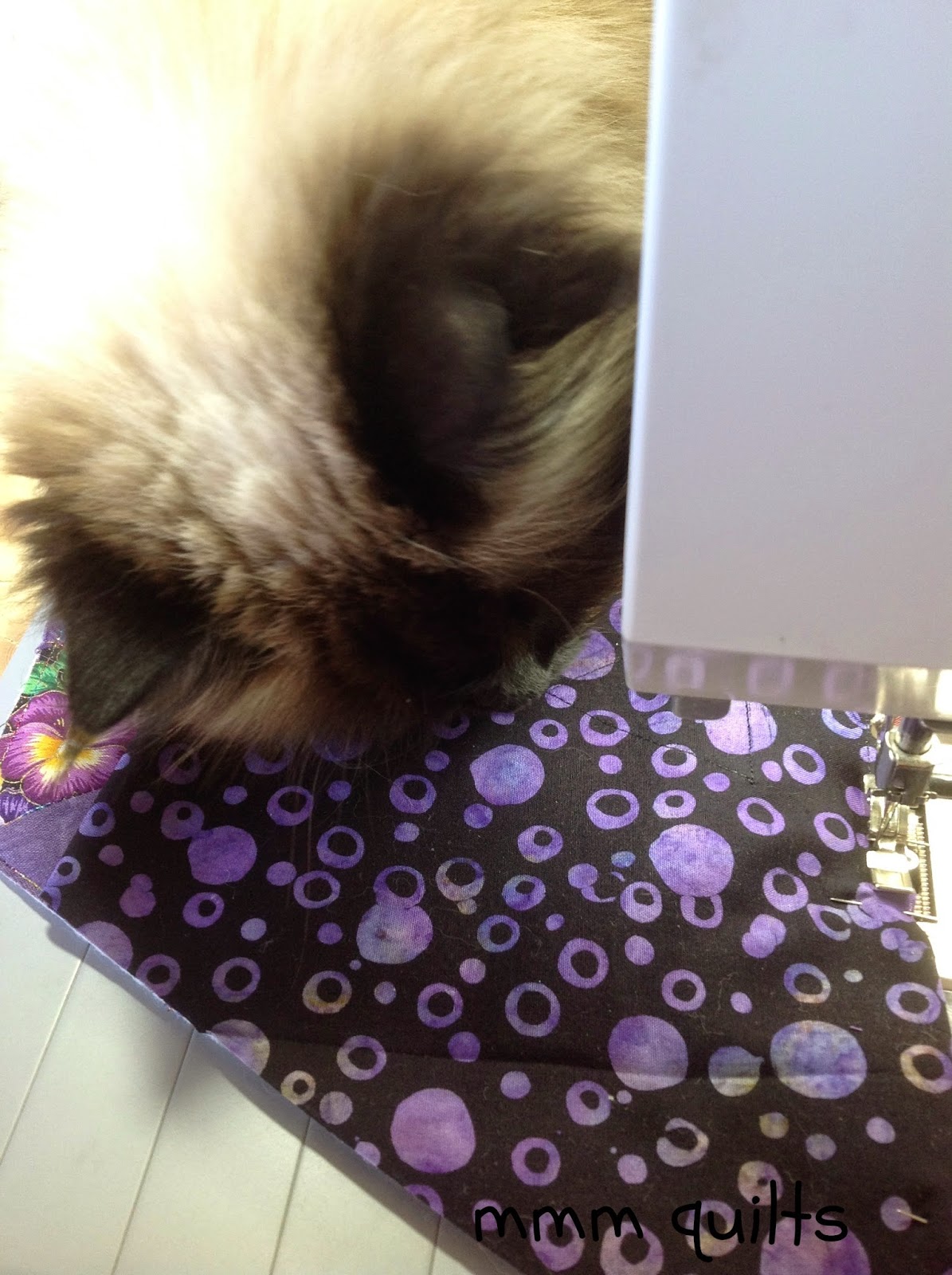 I made my own label.

It's a gift for my youngest daughter, Dayna, who has been the biggest supporter (well, she's tied with my sister, Linda) of my blog since its inception a little more than a year ago.  Here is the bottom: