Flimsy is done!
There sure didn't appear to be much of a wind from sticking my nose out the patio door, as well as from my walk with Rocco earlier in the day.  However, this is as straight as this quilt hung for the entire photo shoot!  My next-door neighbour Jude calls this corridor between our back patio/gardens and neighbouring Park Lane, "the wind tunnel". And boy, is it ever sometimes...

This is my flimsy finish for The Inquiring Quilter Jennifer's "Stepping Stones Quilt Along".  I was in love with Jennifer's neutrals version she first posted, and that was the main reason I joined the quilt along; I've always wanted to make a neutrals or low volume, as they say these days, quilt.  I was not in love with my version, rather 'meh not feelin' it,' for most of the process.  Bella however, got involved from the start, and loves this quilt.

First paste-up of blocks on the design wall Friday night: 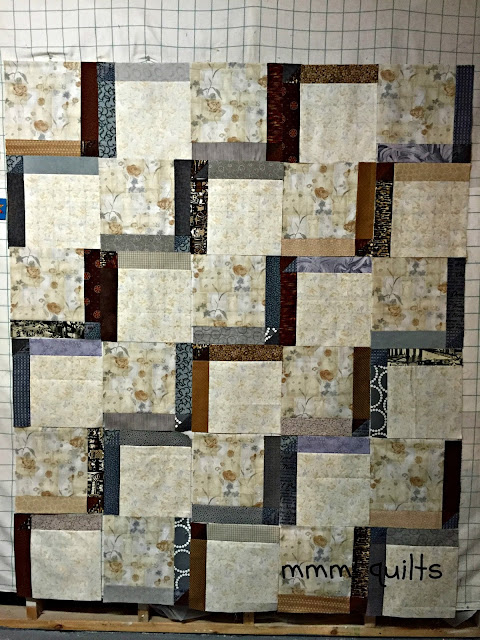 A whole lot more 'meh' and disappointment; I'll be honest.  After using, yes, old fabrics (both ivory florals) yet fabrics that were bought from quilt shops, ergo good quality and more than a few $$, I was disappointed that I wasn't really in love with the quilt.  I'd hope for perhaps a 3D look.  iMessaged with Tish of Tish's Adventures in Wonderland that night and she said she did like it, which helped give a little lift to my spirits.  Slept on it.

Got up early Saturday and had a bit of a brainwave just upon waking...what if I grouped the greys together and the browns together? 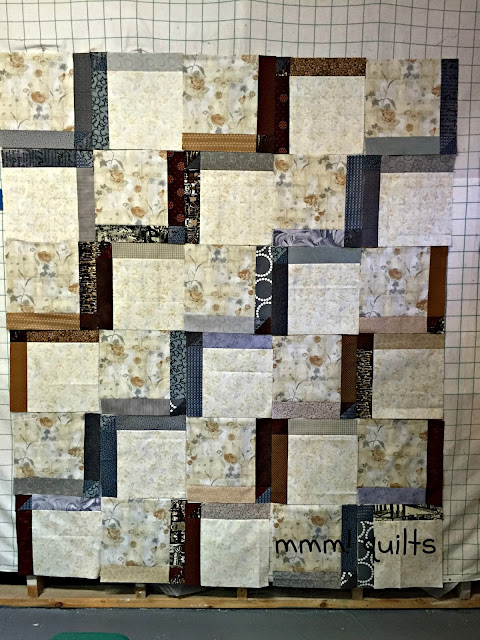 Liked this much better.  Order.  Pattern.  I don't do chaos.  Random.  Nope.  Ran it by Tish, yep, she liked this better too, as did Judy.  Julie, (sidenote, go look at her Three Naked Ladies Blooming in Moonlight quilt - serious mad love for this one), however, who marches to the beat of her own drum (and we all know the world needs those fabulous, shake-the-likes-of-me-up souls) liked A.

Too late.  I'd already started sewing and had it nearly together later that day when we connected.  And then, stopped.  Arghh!  Had one block somehow oriented the wrong way, so did a little reverse-sewing before bed, knowing I'd be able to fix it and finish the flimsy after lunch on Saturday during my sew-with-a-friend afternoon. 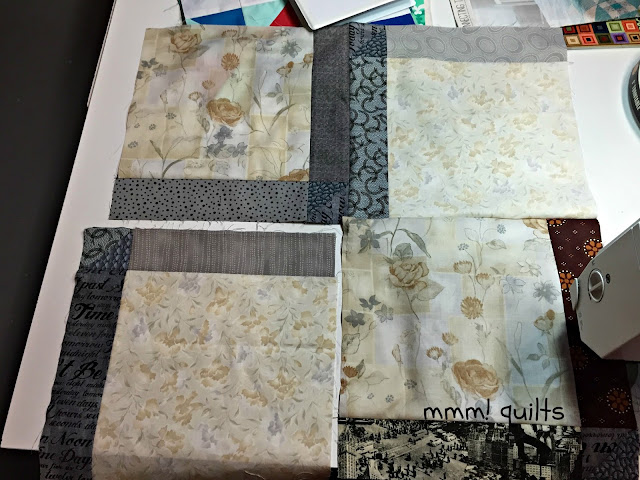 By now most of you are seeing that Tish's and my friendship is going to a deeper level.  She put me on a stick (Yes! She DID!) so I can sew with her, hunker down in her purse to go to work with her, smile encouragement to her as she drives here and there (she could stick me in her visor, or hang me from her rearview mirror, always wanted to get cray-cray on a chandelier and that's probably the closest I'll come to it...)

Yay for iPhones and FaceTime!


Tish sat on my cutting table; I sat on her shelving unit, and we sewed and talked...it was the best!  Bella was quite taken with Tish, hopping up and sitting beside her as you see, but also looking at her, listening to her, ears twitching...she recognizes another servant human methinks....

That or the mama of another feline kindred spirit:
Cats don't need FaceTime or iMessaging; I swear they have a memos system.  They are all so freaky in their similar quirks.  Anyhow, Tish and I, Bella and Caroline, even Oliver and Tish's daughter popped in and out...we all had some quality creative sewing time together.  :-)

Back to Pebbles and Bark. 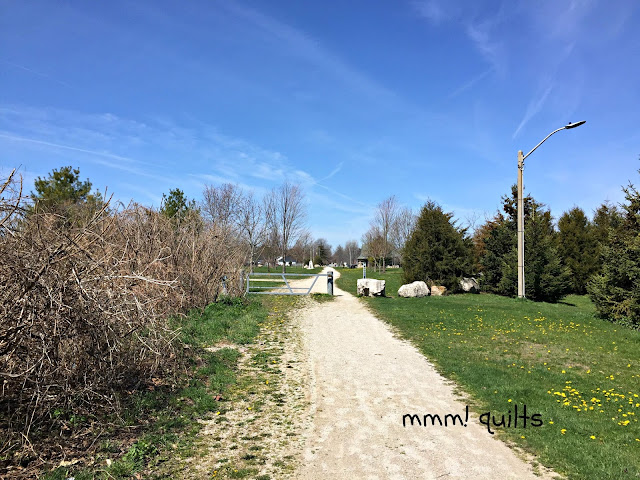 I was still trying to embrace the rich browns in my quilt.  On my Sunday morning walk with Rocco on the Chrysler Canada Freeway (walking trail built on the old railroad), the name came.  The pebbles on the path, and the mostly bare bark of the trees reminded me of the colours of my quilt.  This name will most likely lead to the quilting motifs.  The nature theme, for those of you who know me well, resonates with me.

Rocco and I walked up to Pelee Island Winery for the first time this year.  It's 4 km (2.5 miles) round trip, and yes, it's dangerous to have a winery within walking distance, wink! This is the main sales pavilion; the main vineyards are out on the island in Lake Erie. I wanted to see if 'my' vines were budding.
Rocco took advantage of the stop for a photo to itch:
This time he smelled fine.  Phew! 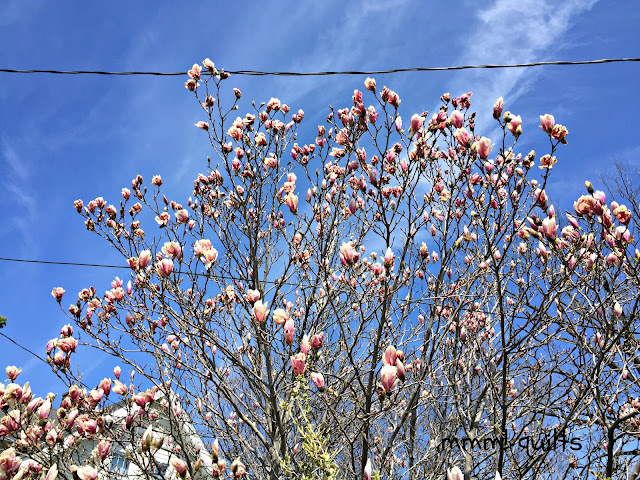 The white magnolias are nearly finished, but the pink ones are just starting to open here by the lake. In the city, Windsor, they are a little further ahead.  Pink icing frothy blooms on a branch.  I could just lick them.  But I didn't, don't worry.

Another looking up shot of a different subject: 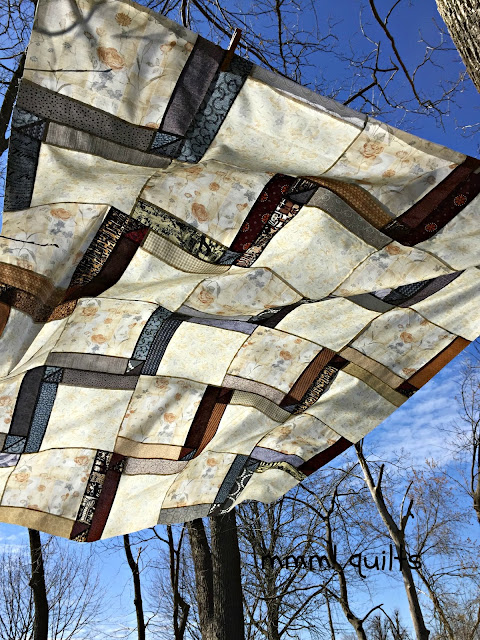 I thought maybe I could get a full shot of the quilt from underneath since it was blowing nearly parallel to the ground...

Ended up bringing it in and trying to get a full-on shot of it inside. 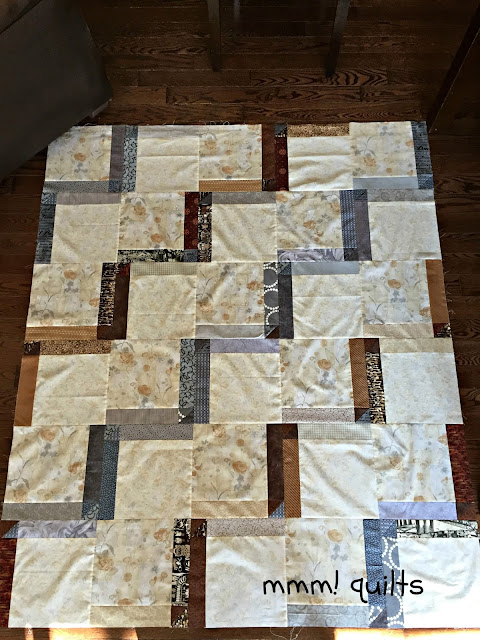 I like it!  Not often do I have a quilting plan at the flimsy finish stage, but there is a pretty solid one here.

However, it is going to be set aside for an über-exciting project I am starting next.  EEEP!  I guess I can tell you, since Judy did too, and you can buy the book right now on Amazon. (no affiliation)  I am part of the upcoming blog hop for the book launch Crafted Appliqué  by Lara Buccella of Buzzin' Bumble.  I couldn't be more honoured and excited to show you her ingenious new method of appliqué.  The hop starts May 2! 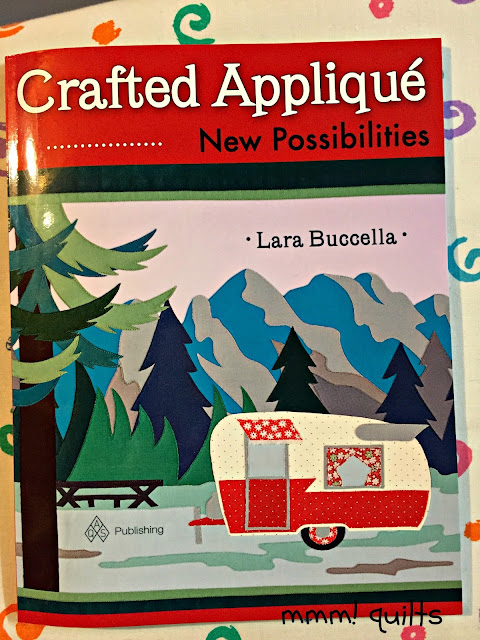 Linking up at
Patchwork Times
Cooking Up Quilts
Posted by Sandra Walker at 1:51 PM