There has been a dearth of them around here of late...

Sometimes words pop into my head from who knows where (probably from a book I read) and I think, "Hmm is that really the right word?"  Enter Google, and yep, the brain was actually right: dearth means "a scarcity, lack."  So that might explain why I needed, like really needed to make this easy-to-piece flimsy instead of working on my Crafted Appliqué project for the hop that is going on right now! Click here for Lara's intro post and the schedule.  Thirty, count 'em, 30 bloggers are helping to promote her book!  And yours truly is one of them.  On the 17. And there are tons of giveaways of her book!

Today I have the companion to Blue Skies, which named itself before it came into being.

I was sort of thinking baby quilt with Blue Skies, and then, hmm, blue for boy, what about girl, pink...love pink with yellow...bought that Windham fat quarter bundle in pinks and yellows (note this link takes you to a different bundle--which I think would look AWESOME in my or anyone's design--the one I got is no longer in stock), made that pink and yellow Three Quarter Patch Tote both items from Craftsy...

Cut off a 2.5 strip of each, added in some LOVELY white on white from Connecting Threads, called Leaf Lines, and eventually had this flimsy.  I added one more row to make it rectangular because some people, (hello Jasmine!),  prefer rectangular quilts, and also to show another possibility.
I liked the idea of sprinkling the yellows and pinks throughout the quilt.  However, I thought I'd just see what a little more order would do...
Decided against the order.  However, this design would lend itself well to a rainbow effect n'est-ce pas?  Tuck that idea away for the future...  Tweaked a few spots as some of the really bright pinks needed separating a bit.
Spent a little quality time sewing with my darling friend Tish on the weekend, okay and Bella too, who, shocker, loves this new quilt: 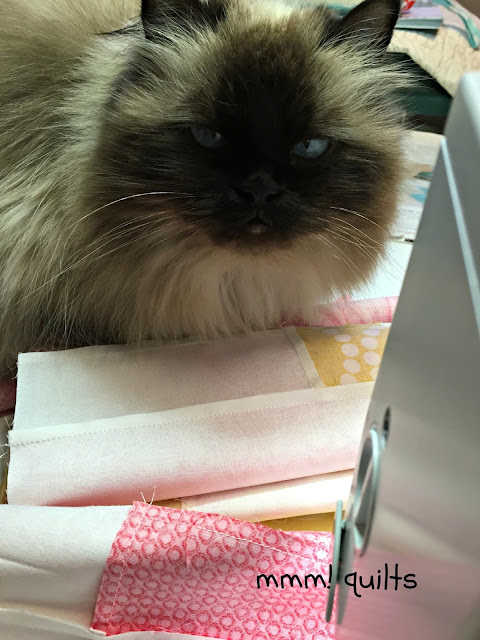 and then finished this up on Monday.


This will go in my Etsy store, which is almost open!!  Apparently I have to have at least one item for sale before it is official...but it has a name! Big reveal when the quilts are in the store.  This quilt is on the Avanté about a quarter quilted. :-)

And!  I am writing up the pattern for the quilt, in both size options, with two cutting options for the white background as well. It is perfect for jelly rolls.  I hope to have the pattern for sale (yes, this one I am charging for) in my Craftsy pattern store in the month of May for May Makers, see sidebar for button.  Both quilts should be in the Etsy store within a couple of days.  Eeek!

Another eek! The sales of Pocketful of Sunshine are up to 2121 as of today!!  Holy wow! (it's a freebie from moi for you, mwah!)

May is for Makers.  Great post on this concept, here at LR Stitched, one which I have LIVED. Basically, choosing NOT to look at Blue Skies and Sunny Days and say, "Ha, I can figure that out," (we've all, myself included, been there, done that) but support the designer who spends hours upon hours designing, making, and writing up a pattern (that makes this designer want to throw things, like the laptop, out the flippin' window at times).  Skip the Starbucks one day and spend those $$ buying a pattern from a designer.  :-)

Speaking of making...I follow Pinch of Yum, and made this dish, Healing Bowls, on Monday, because I saw it that day on her blog, and was like, uh HUH! We have almost everything on hand.  I substituted spinach for the arugula, and fried, rather than poached, an egg in just a smidge of butter.  To DIE for.   Sweet potatoes, brown rice and quinoa, spinach, egg, lemony-herb dressing drizzled over and sprinkled with almonds.  I need to make this again.  Like now.
'k bye. (as only Brady can say so very well!)
Linking up with Lorna at Sew Fresh Quilts who has a wonderful runner to show you that she created with Lara's Crafted Appliqué technique...and a giveaway!

Posted by Sandra Walker at 4:56 PM