The story:
Picked up this sweet robin's egg lying on the sidewalk yesterday on my walk with Rocco.
Clearly something was wrong: either the baby inside hadn't developed properly and the egg was kicked out of the nest, or a predator bird had attacked.  I am surprised it was in as perfect a condition as you see.  We walked between, well, ended up IN, rain showers, so those are actual raindrops on the egg.  Incredibly smooth.  Incredible soft robin's egg blue.  And yes, I'm the crazy lady who walked another 2 km cradling the egg in my gloved hand. (gloved!! at the beginning of May!!)
Incredible rich exotic fuchsia colours of one of our rhododendrons in the early morning golden sunlight.  Irish green grass.  Chartreuse leaves.

I am a colour-observing, colour-soaking-up, colour-adoring crazy person. (according to my family)  I don't care what they think or say.  I love, appreciate, and will continue to proclaim the richness of Mother Nature's wondrous palette.

However, Mother Nature is ruthless.  The weak, the sick, the injured?  No mercy shown.  Forest fires have been a way of purging, Spring cleaning if you will, making room for new growth to burst forth.  And it does.  Incredibly.  But cities do not need fires.  At all.

Even before the horrific forest fire that has forced 90 000 people to evacuate the entire city of Fort McMurray and some surrounding areas a couple of days ago, I had thought of showing this Alberta quilt for Throwback Thursday.  It's been on the guest room bed since January, so I've been seeing it on a daily basis. 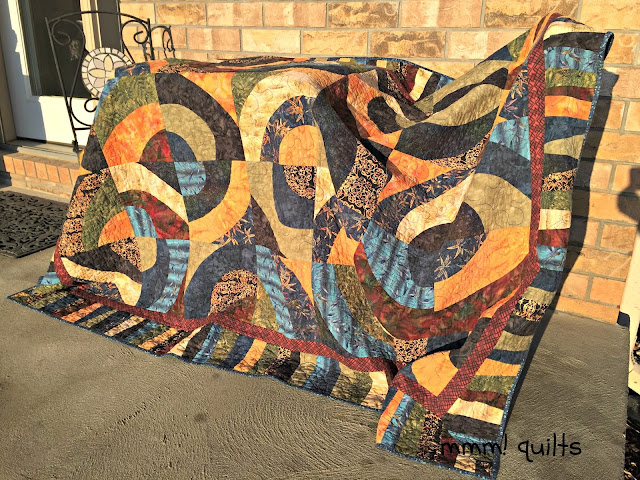 Photographed very early this morning in the incredible, almost tangible, golden sunlight, this quilt's golden colours just glowed.  Since it rained most of yesterday, I was worried I wouldn't get good photos, but I am so happy it did rain, because I got to capture it this morning.
This is a pattern called 'Red Onion' in Karla Alexander's second book, Stack a New Deck.  I first saw her on Alex Anderson's "Simply Quilts" on HGTV.  I made the first version of this quilt for my brother's wedding gift.  I've since made a few quilts out of that book and have a stack of batiks pulled for yet another (that stack went to Florida...and came back, still in their stack, oops).

It's a free-form cutting technique, look no rulers! Improv piecing probably before it was known as that.  You stack squares of fabric, cut random curves, shuffle the stack, and sew the pieces back together.  Fast, mindless, and gorgeous results occur. 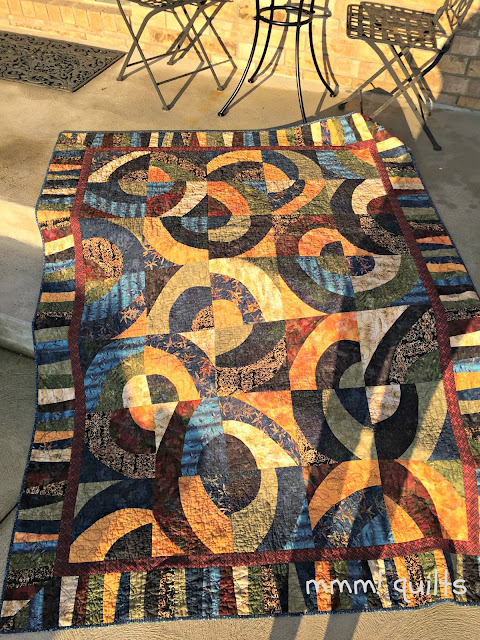 To the raised eyebrows of a couple of quilty friends, I combined batiks with regular cottons.  I wanted rich colours.  I love blue and yellow, but I wanted saturated blues and yellows.  Added in some green, a couple of burgundies, one with green in it, some black, and that lovely grassy dunes print.  I also made it a little bigger.  It measures 61.25X81.5".

Why the name?  These fabrics are all from quilt shops in Alberta, many of them collected simply because I loved the fabric, some leftovers from other projects.  There are a handful of leftovers from my brother's quilt.  I was sewing this at the first guild weekend Spring retreat that I was in charge of.  One of the colour gurus in the guild heartily approved of my colour selection, and made a point of telling me how rich they were looking together.  I remember gazing out of the windows at the pond, the birds busy as ever, anticipating the coming of good weather as I sewed.
I quilted this on my Bernina, using the Quilting in Thirds method.  I mimicked the pond plant fronds of the blue fabric in the border quilting.  Just free-motioned it.  Need to do this again!  Great effect.  Isn't that fabulous binding fabric?

But back to the quilt's name.  The year I sewed the quilt was 2005, Alberta's 100th anniversary of becoming a province.  Yep, Alberta, formerly a part of the Northwest Territories, is a pretty young province.  There were big celebrations that year.  While I was sewing this quilt, I thought it should have something to do with Alberta in its name, seeing as it was Alberta's birthday and all the fabrics were from Alberta shops.  The rich colours of the quilt started me thinking about the rolling hills, the fields of wheat, barley, canola, or alfalfa hay, stretching away to the blue skies.  Sunny skies.  The deep midnight blue skies of 10:30-11 pm on a summer evening.  The Rockies.  The small, often cold, but gorgeous and abundant lakes ringed with evergreen trees. 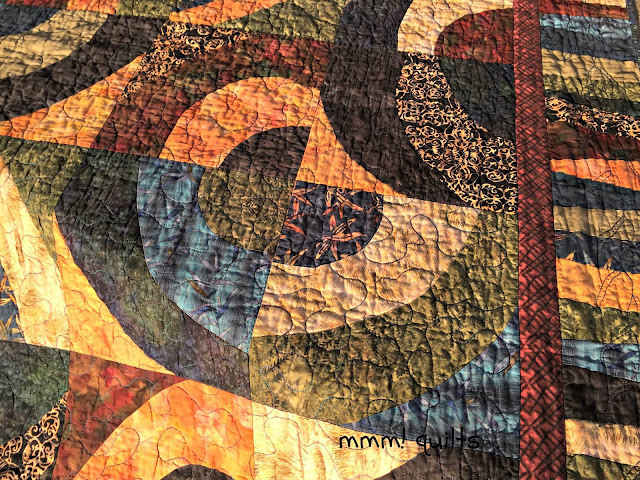 Throwback Thursday really amazes me in the images, the memories, the feelings, that get conjured up when I write about a particular quilt.  The stories.  I'm not the only one; I love reading the stories and feelings behind other quilters' quilts. :-)  I bought the binding fabric when I was with my aunt (future recipient of the cows quilt) in a tiny quilt shop near her home, an area where another evacuation took place last night due to a second, separate, grass fire.  My aunt was pretty tickled that I'd found the perfect fabric in 'her' store.  The backing fabric was a great find in another shop.  It is the same fabric as the burgundy frame on the front!  I remember being ecstatic to find it and know immediately where it was destined.
The writing on my label has faded a fair amount, so I will have to go over it, with a gel fabric pen of course.
Rather sadly, the news of the massive, out of control, Fort McMurray fire seems to be contained within Canada, yet it is the largest fire evacuation in Alberta's history. 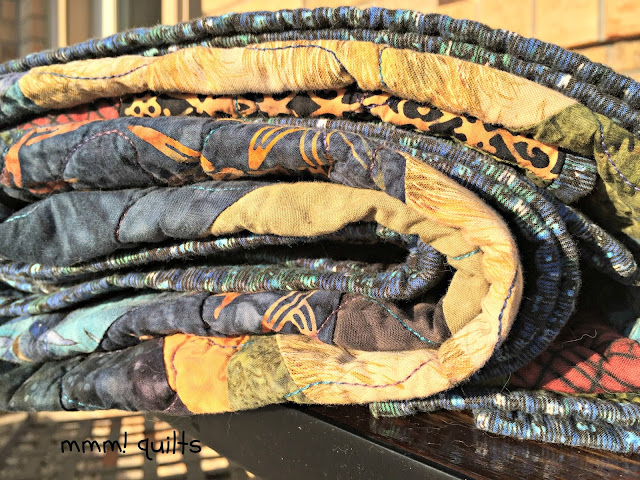 I've seen the aftermath of forest fires, and it is apocalyptic and sobering.  Thankfully I have never had to witness one as it is happening, other than witness the haze obliterating the azure skies, and smell the acrid smoke from far-off fires that was pretty much an annual occurrence when we lived there.

My heart goes out to those displaced people, who have no idea if they will have a home to go back to; some neighbourhoods have had 70% to 90% destruction.  You can click here to read about the situation.
I can't imagine having 20 minutes' notice to leave, try to decide what to take...it's easy to say every thing is replaceable, which is true, but not.  I could never replace this quilt.  Not exactly as shown.

Replacement: I've just realized I have a wonderful segue into a replacement of the bistro table kind: 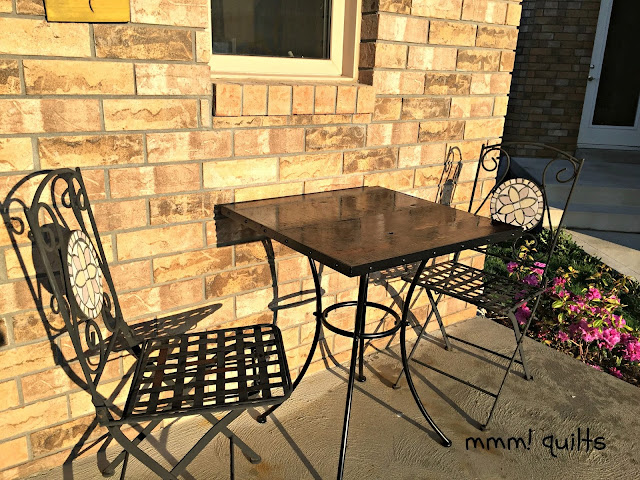 My darling husband, known here on the blog as the intrepid MacGyver due to his distrust of all things social media, replaced the mosaic round top to my much-loved set with this wood top he made.  He bought a length of barn board, cut and pieced it to size (hmm, sounds like quilting), "beat it up" as in scorched it here and there, pounded on it with a chain, (getting out his anger, right, lol), tea-stained the wood (more quilting similarity, I kid you not) and then he sealed it with several coats of verathane.  Once it warms up, I will be having my morning coffee and read out here as per usual.
Linking up with
Throwback Thursday
Needle and Thread Thursday

Posted by Sandra Walker at 2:28 PM