This seems rather anti-climactic since you've seen the flimsy and a lot of the components on both the 'paperless' paper-piecing post (how's THAT for alliteration, unintended to boot?!) and the Cutting post, and then as featured on Paintbrush Studio Fabric's blog, and beyond, eeek, like Aurifil and Pinterest omg...but all that aside, presenting Freefall! 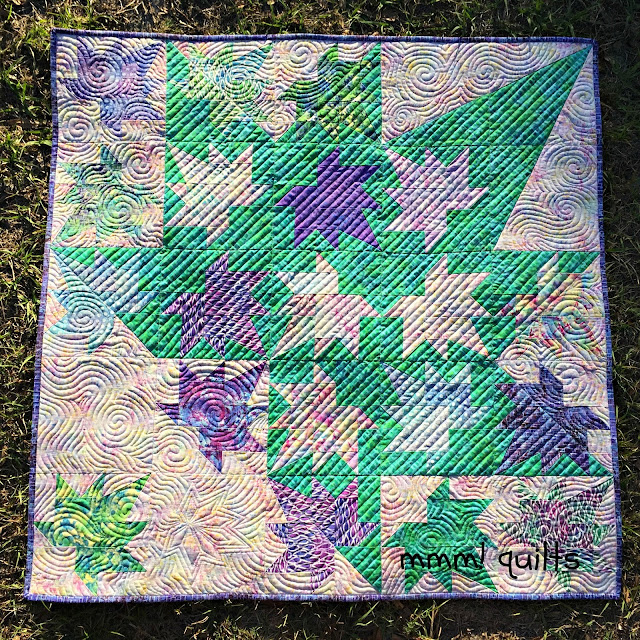 This was one of my Q1 FAL goals, and I'm so happy that I can check it off as done!  My list is here.

This is the wallhanging size of the big quilt I made, Windfall, which was done with Paintbrush Studio Fabrics as well, in the Windfall line.  I don't think I could pick my favourite as I adore both of these lines so much.  We are doing the wallhanging as a quilt along, and it is not too late to join in if you haven't heard about it or have been sitting on the fence!  Steps are coming out bi-weekly, quite do-able IMHO. Click the Freefall Quilt Along tab at the top and you will see what's what so far.

The flimsy went together very quickly. 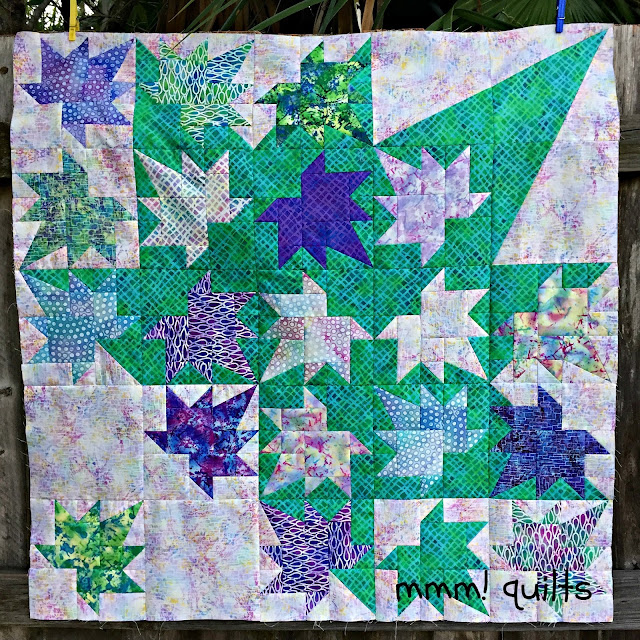 Layering was next.  I spray-glue baste...I first heard about it in a Stack 'n Whack class I was teaching back, uh, let's leave it at some time ago, from a student in that class.  The way she described, 'throw my quilt in a corner'...'leave it sit for a while'...'washes out not problem'...'no pinning'...'changed my life'...well it certainly changed mine!  So I spray-glue basted this puppy. No. Wait.  First I had to decide on a backing.  I nearly went to the LQS to buy something but then I thought why not use some of the leftover fabric since A. I have some and B. I love it so much that having it on both sides is a bonus and C. I love patchwork, ergo interesting backs! So I cobbled together several of the prints, layered and started ditching.
I always always stitch in the ditch.  It stabilizes the quilt, and even if you are FMQ-ing the death out of the quilt, the lines will disappear.  I think sometimes that puckering happens when people jump in and start FMQ-ing without having ditched.  Just my opinion, but I've never had a pucker or fold on the back in over 20 years now of quilting.  This quilt has 25 blocks, so I stitched the grid they make. 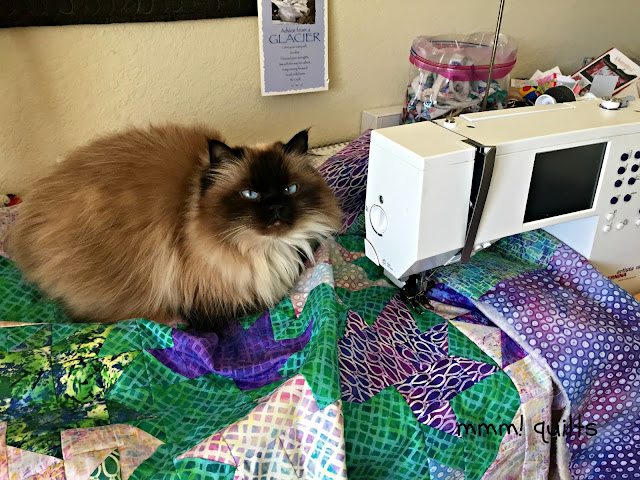 I decided to do straight-line quilting in the shadow leaf.  Not having a ruler foot for my Bernina, I used my walking foot.  The next dilemma was to decide on a thread.  There are many colours that float over the green so I didn't want to use green and have it blend/pop/blend/pop kind of thing.

Because there are layers of leaves in this quilt, I ignored those that float on the big shadow leaf. I remembered Angela Walters saying that she turns to a pale grey or pale yellow when going over many colours.  I had Aurifil 2600 with me and laid out several coils across the leaves.  Yep, I think it would do it! 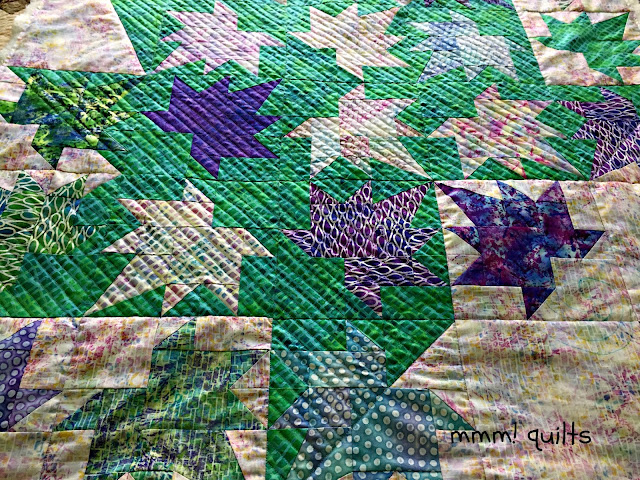 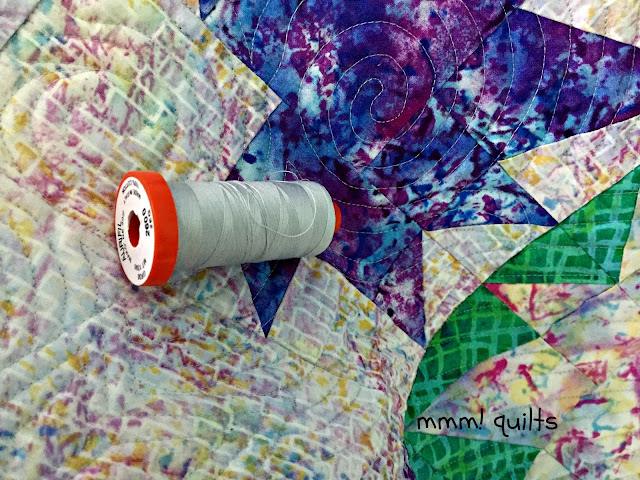 I thought it worked so well that I used it for the background, where I went with a contrasting motif, swirls, hoping to evoke the swirling winds of Spring. 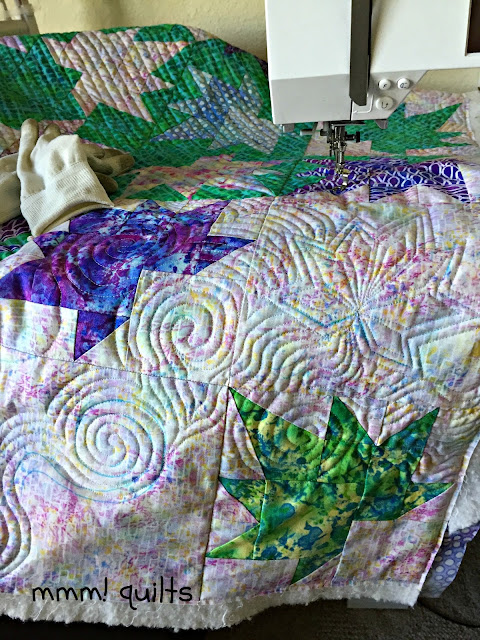 I always quilt in a surprise or two. 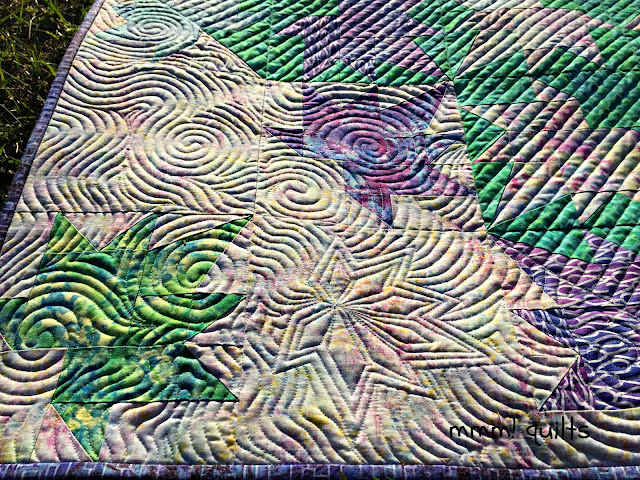 Had to put a ghost leaf in this one too! Windfall has three I believe.  I tried to keep the lines of the swirls about the same distance as the straight ones, but they ended up being a bit closer I think. 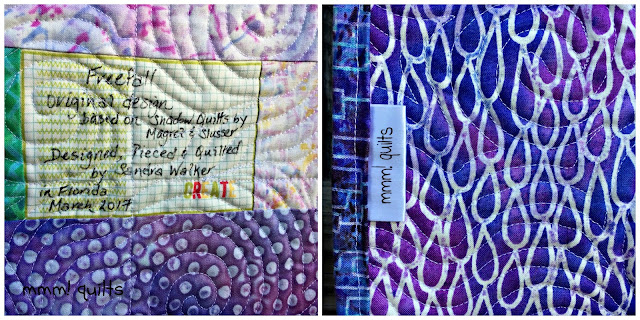 As I often do, I made the label an integral part of the backing.  And of course I now also (usually remember to!!) attach my label from Ikaprint.  You can see I used the purple 'brick' print as the binding; its twin, the pale low volume one is the background on the front of the quilt.  Aren't there some oh-so-cool prints in this line?  The dots! Those raindrops!! 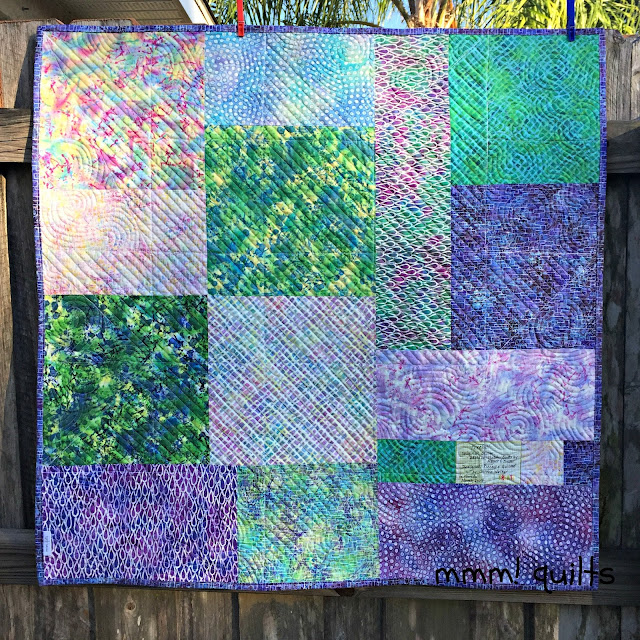 I'm SO glad I did decide to build the back with the leftover prints.  Paintbrush was very generous with the yardage they sent me.  Here's the front again, as pegged to the fence with the evening sun just touching parts of it. 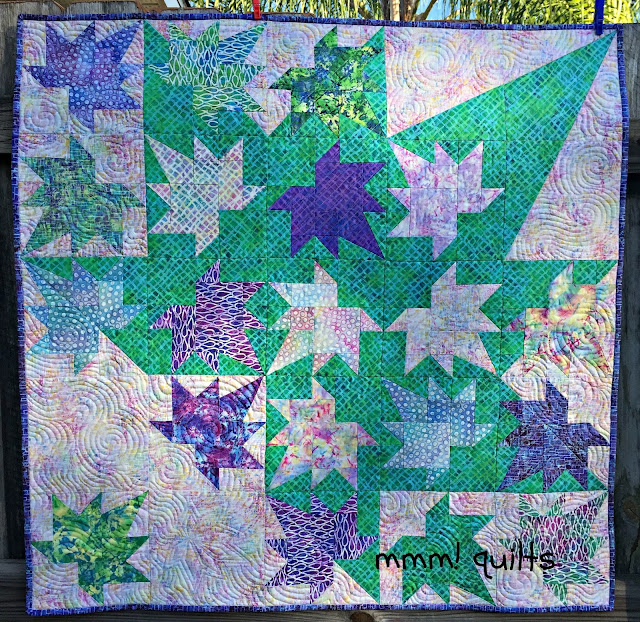 And, not in a tree, but tree in the background: 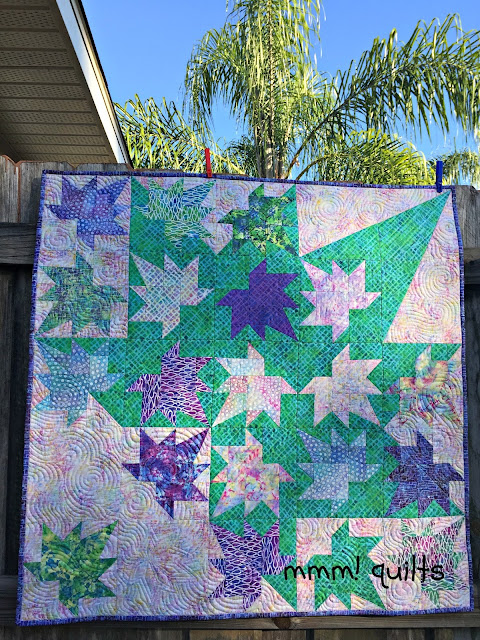 I have lots of ideas for shadow quilts, and actually drafted another for the design challenge that finished earlier this month. I'm working on a floral one at the moment.  Remember Step 2 instructions come out on Monday, April 3.  Those will be the first sewing ones.