This has been a summer of many tears. I could fill more than one post with all my sadness and deep grief. Two unbidden and unconscious things keep happening during these periods though. First, my higher self keeps reminding me that my woes, though they seem insurmountable to me now, pale in comparison to the woes of so many just within this past week: people in Burkina Faso, where there was a mass shooting, people in Sierra Leone where there was that horrific mudslide, the many teen refugees drowned in the Arabian Sea off the coast of Yemen when the smugglers pushed them overboard too far from shore, more of those same teens from that boat who survived and witnessed and now must live with such inhumane horror, and then there is the ongoing tragedy of refugees who have no homes, or whose homes consist of a tiny shack one can't even stand up in, or a single bed in a sports stadium... Second, a part of me keeps being quietly grateful for small things, on a daily basis. Here are a half dozen or so for this month. I am blessed.  In many ways.

1. I thoroughly am enjoying writing to Brady, pen and paper in hand, thinking of how happy he will be when he finds another letter for him in his mailbox, imagining him reading it. The last letter took a couple of days to write, and when I picked it up to continue, I re-read it, and I'd told him of something (see #3) that I'd been doing, and how I needed to add that to my list for this post. He's written to me once, and drew me a very good picture of the Wimpy Kid, which I walk past many times a day as it is on my fridge.

2. I love the sound of cicadas here in southern Ontario. We don't have them in Alberta, and before I knew what they were, I just called them heat bugs, because I seemed to hear their extraordinarily loud buzzing on hot days and nights. We all know I like hot days and, well, okay, maybe not hot nights unless I have AC, but warm ones, no prob.

3. I love the smell of fresh sheets that have been dried outside in the sun and breeze. Getting into bed at night, the cotton feels extra-crisp as opposed to coming out of a dryer, and when I lay my head on my pillow, that scent that no detergent can capture wafts up my nostrils, and ahh! I smile.

4. I like a good night's sleep in said sheets. I haven't had one for the past several nights; in fact, a couple out of these several were, I'll kind of sheepishly admit, terror-filled. Yet I kept thinking, as I sobbed and cowered and trembled and jumped at every noise or movement in the guest room in which I'd barricaded myself and the dogs, how much worse it is for kids, for adults, who deal with gunfire and bombs and intruders each and every night in places where there is war.

5. I like bats. I love that one bat can eat about 3000 insects in one night, I love seeing them fly (so FAST!!) over my head in the darkening sky when I'm out walking, I find them fascinating creatures, this one a Little Brown Bat, furry brown with a rather cute black face and amazing very thin almost opaque black leather wings. 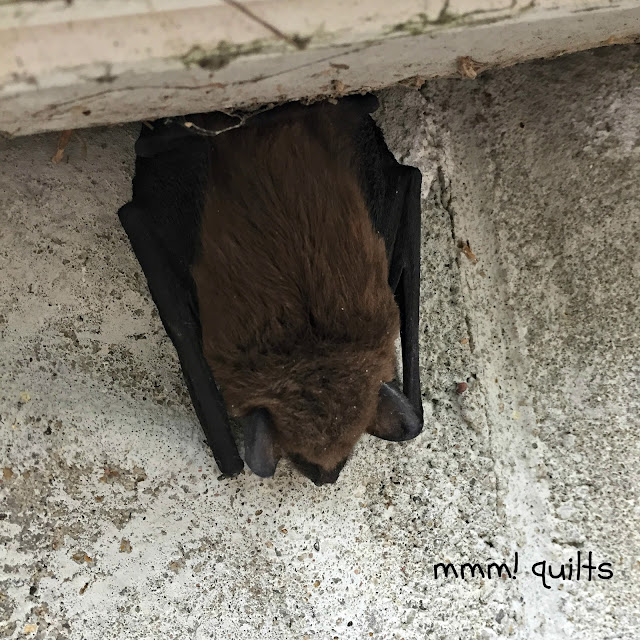 I do not like intruder bats in my house, however.
Yeah. I'm pretty sure more than one were flying around in my house around that good ol' witching hour...midnight...1 am...you do not need to ask how I know. Pretty sure more than one because I high-tailed it out of my room, Sunday night when it first appeared, then took half an hour where I made several forays back in to a) get dogs out, then b) get each dog bed, one at a time, then c) get my pillow, d) get my book I'd been pleasantly reading when it had made its presence known, e) get my phone f) grab my favourite quilt off the bed so no poop would get on it g) gaze at it in fascinated horror when it had landed on one wall near the ceiling h) get Bella out (yay that she comes running to treat bags being shaken) and finally i) slide a lamp in the room, suggestion of husband MacGyver to hopefully keep it out of our room and up the stairs in my (waaahh) sewing loft from whence it came.

Of course this happens when my MacGyver is not home.  Of course.

So back to that Tuesday morning of the photo. Could I go to yoga, come home and not see that bat, and know I'd have to live with it again for another day and night? No. I knew of several ways I could catch it because by now I'd done a fair bit of research and learned a fair bit about bats, a ton of stuff that I did not know or had incorrectly assumed: for one, they certainly CAN see, very well. So I grabbed the dust mop, then got my phone and took a couple of photos, so I could show MacGyver I was not batty, pun intended, imagining this, and then gently nudged it, trying to get it to fly out of the door, which I'd opened, bugs coming in be damned. It hung onto the molding a lot harder than I'd figured it would! Finally, Bella not moving, bless her feline heart, because she could have run out the door or grabbed the bat, it fell to the floor and lay fairly still. I figured it was exhausted from flying around trying to find a way out and/or keeping away from Bella all night, or fingers crossed it was not, hurt by Bella. It didn't appear hurt, but I wasn't getting too close! I finally managed to nudge it out of the door and onto the deck and PHEW!!! Heaved a massive sigh of relief and wished it a safe journey to hang out (pun intended) for the day and rejoin its baby and sisters that night. Females roost in colonies so that while they hunt at night, the babies keep each other warm. Females only have one baby a season, and I figured maybe the baby was the first bat I saw in our bedroom because it didn't seem very big, and this second one was the mama, because it was a good 5" in length, come to rescue her baby. But I'm not sure, because this one could have crawled under the doorjamb of our bedroom where I thought I'd trapped it, and been what I thought was the second one flying around over the course of the couple of nights. How do I know this is a female? Males roost in trees, not in buildings. I named her (didn't plan to) Hermina. Hilarious sidetone: my phone autocorrected that to Bernina when I was texting Tish about all this drama!

Once I got home from teaching yoga, about 7:10 am, I went around to the deck to see if the bat had moved, hoping she hadn't been caught by a predator. She had moved!! The first shot is of her, yes I got up close and personal and she just moved one wing a little when I took the picture. I kept a close check on her all that day (ya, protecting her after she'd terrorized me over the course of two nights and days) and when the bat people came to do the legal and safe and harmless eviction of them out of our chimney, one of the guys moved her to a tree, where she flew up into it to hang out until dusk.

6. I really am enjoying the deck on this new old house. One day last week I decided to take advantage of one of my Featherweight's portability and brought her out here (where I'm writing this post btw) to sew, in the sunshine. I set up a pressing station on the kitchen table a few steps away through the deck door, thanks to a small homemade pressing and cutting 'book' and my favourite little Steamfast iron, worth every cent. (affiliate link) Hmm, that pressing/cutting 'book' might be worth a future tutorial; I use it a ton.

7. I do love my Featherweights. This is the 1947 gal, who I have yet to write about, and tell you her story. She is a dream to sew on. I'm thinking to buy the quarter-inch foot from Nova Montgomery (no affiliation, but a great resource) because her throat plate has no markings, and the one that is on my 1951 girl, and which I switch out on the '47, the seller had etched with the seam guide, but it is not a true quarter-inch; it's too wide. Any thoughts on that, please let me know in the comments or email me by clicking on About Me. 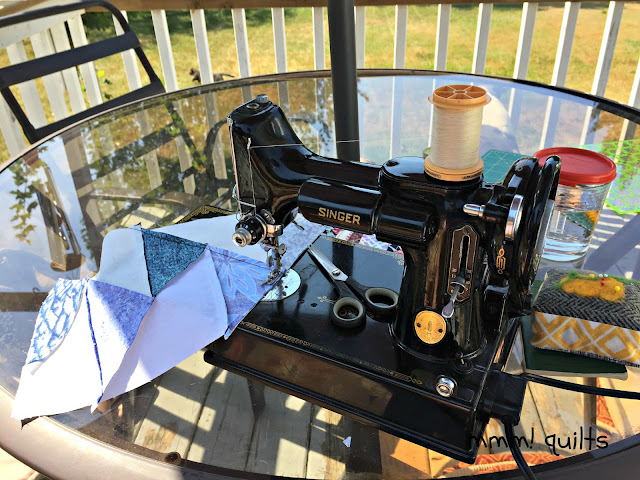 I feel bad about making the bats refugees but I definitely do not want to share my house with them, sorry. I have another project for MacGyver now, to make a bat house, and hopefully one day some offspring from that colony will inhabit it.  There are a great many bats around here, and that may be a big part of why there aren't as many bugs bothering us as there were at our previous house just on the other side of town. 🦇

Linking up with LeeAnna at Not Afraid of Color.
Posted by Sandra Walker at 6:00 AM

Email ThisBlogThis!Share to TwitterShare to FacebookShare to Pinterest
Labels: gratitude