Project 1
My original project.  My house quilt! I drafted a basic schoolhouse block combining several ideas: the one on the cover of my first quilt book I ever bought, The Quilter's Companion from That Patchwork Place, a paper-piecing pattern I have by Denise McKenna from many years ago (15?) that has a quilt block on the side of each house, and Lori Holt's barn blocks on Pinterest. I made the first block in January's colour, purple, made the second one in turquoise leftovers, and felt compelled to turn it into a cushion cover for my new sewing loft space. I had had no idea aqua would be the February colour! So I thought I'd make another in aqua for the quilt, but that hasn't happened.  Nor had any other colours, much to my embarrassment.  Until this week.
Have I mentioned how much I adore scrap quilts? Here the yard is a red flower-filled cotton print from Cranston Printworks bought 29 years ago when I learned to smock, and made my girls matching smocked dresses. (need to dig up a photo of them wearing them) The roof stripe is a scrap from my first published pattern on Moda Bakeshop, and the windows are scraps of Paintbrush Studio's Windfall, which I used for the quilt that inspired the first QAL I ran here on the blog.

April was multi-coloured fabric, and I haven't decided whether I will make a multi-coloured house yet. Will wait until the end and see how many blocks I have, and how they play together.

I played around again with a slightly different look to the house front. I'm sure you spotted the cat in the 'window'. I am tickled that I found the green, kind of cloud-like fabric, used in Cheryl's Meadow Mystery for the sky. Love the letters fabric for the front door!
August is neutral colours, and I have a block started. If you're curious about the little star blocks (6") on the house side, the red, blue and yellow ones are from the 150 Canadian Women QAL, and the others I've drafted from traditional blocks. A different star is in each house side. 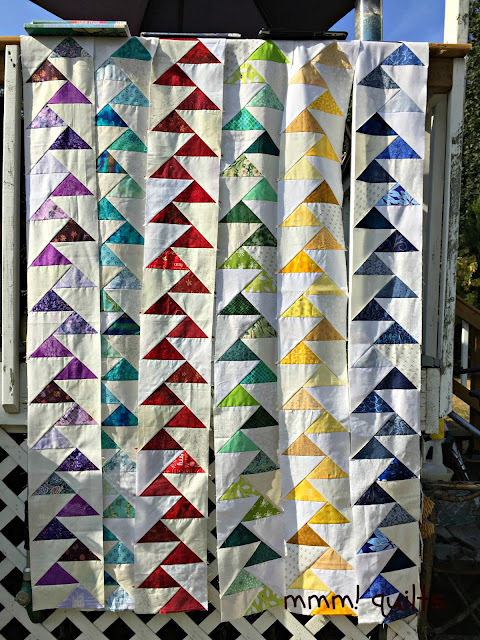 I haven't done the multi-colour, nor will I do the neutral. I want this in ROYGBIV order. I battled the almost ever-present wind that day:

Project 3
My strings quilt, the project that just kind of happened. It's a leader/ender project using strings, which now also appear to be having babies and multiplying out the yin/yang. In case you don't recall, or didn't bookmark the link the previous times I have shown it, the tutorial is here. She did hers all multi-colour, whereas I had the idea to do opposing corners in scraps of the same colour. I had no plan other than that, just to see what would happen. It's taken a few months to realize I need a little bit of a plan, well a strategy anyhow. So I now don't do both opposing corners in a colour unless I know where the block is destined to fit. 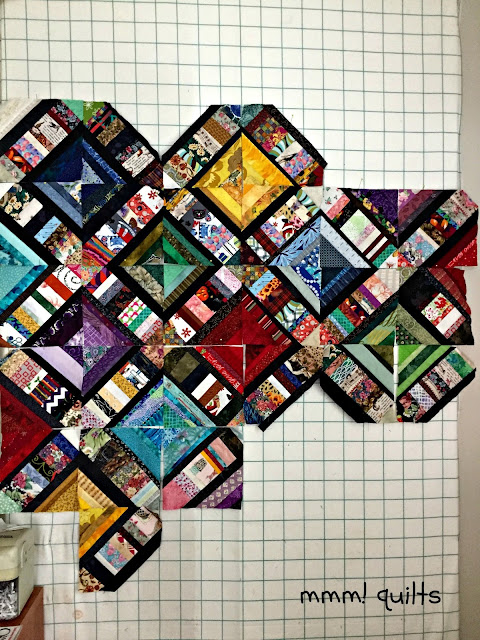 It's starting to take shape! I did add neutral to this project: I had the idea to do the four corners in neutrals, so I have one done here, the top left. I envision this quilt to be 6X8 blocks, so it will finish around 48X64 since these are 8" finished blocks.

By the way, that is half of my eventual full design wall. This is a gridded flannel I bought over 10 years ago from Hancock's of Paducah (paid a shocking amount of duty to get it). I cut it into two lengths so I get an 8 feet square design wall. I use straight pins to pin it into the 1" thick foam board I bought at Home Depot which I found in Windsor in 2 feet wide lengths, yay! Much easier to transport. It is set up in the guest room and will stay there as the loft doesn't have the required height. I'm fine with running up and down stairs when needed. It's good for me.😉

Linking up with soscrappy where there is a ton of inspiration for rainbow scrap projects!

Posted by Sandra Walker at 1:15 PM