Sorry this is posting late; seems to be a theme in QBL today! What do you get when you put a not-quite-finished orange row for your RSC project #3 together with water, a fair amount, though not a flood, in the basement which mystifies your MacGyver? Yup, a late DrEAMi! link-up.  He's at Lowe's, as I type, going to replace the bath faucet because he thinks that may be the culprit. He's not sure this is the cause, which has me a tad alarmed as this has been an ongoing issue since we moved in here, though only once before has there been this much water dripping from between, yeah, between, the toilet and the tub area. Anyhow! This post is going to serve two purposes: my RSC link-up for September and the DrEAMi! linky party.

I actually sort of have a DrEAMi! this month. It's not the true kind, where you see something on Pinterest, or in a magazine, or at a guild meeting and it just GRABS you and you rush into your sewing room, dig through your fabric and just do nothing else, like not even eat or sleep (lol, kidding but it is that kind of intensity) until that baby is done-done! Mine is this quilt: 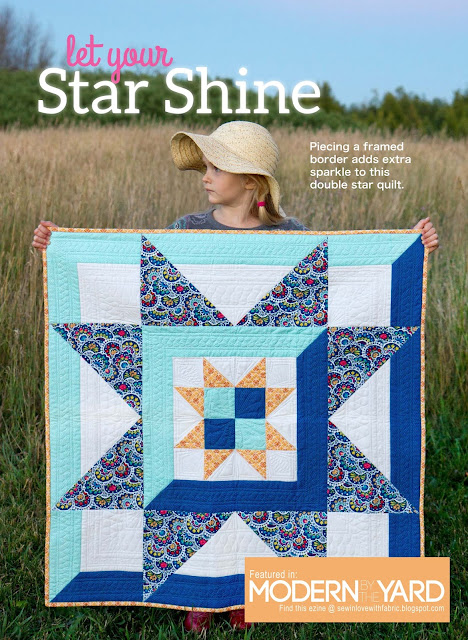 You can read more about it on Sew In Love With Fabric, and here on my blog. I actually did drop all other sewing and not only make this quilt in time to mail it to Michigan to get photographed for the e-zine, but I also made a test one you can read about here, while I was waiting for the fabric to arrive! Here is my own picture in the late afternoon sun:


My RSC orange projects are up to date, ha, isn't that great for the last day of the month?! I'll be linking up with the others at Angela's soscrappy Saturday linky party.

Here is project #2, the migrating geese, orange row against my beautiful fridge, lol.  I still plan to give you a kitchen reno tour, and ya, sewing loft in progress post. 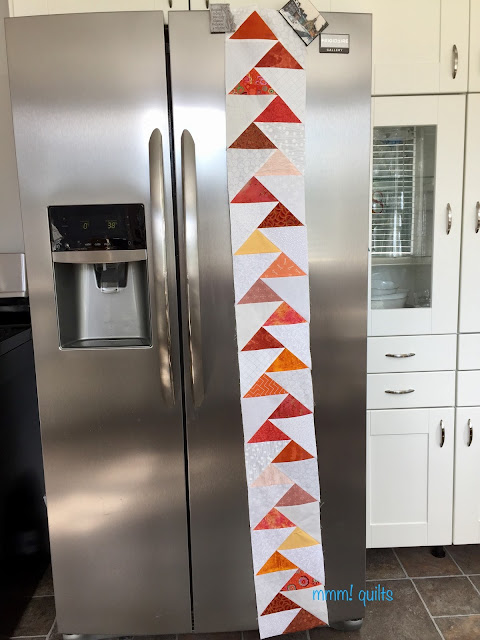 It sways a tad to the right doesn't it? It'll straighten up once I get them all sewn into rows. Lots of bias edges, and lots of shades and tints of orange, n'est-ce pas? I have a new-found enjoyment (it's not love...yet, sorry Anja and Preeti) of the colour orange. 😉

Project #3, the rainbow strings quilt has an orange square on point now as well as another yellow. 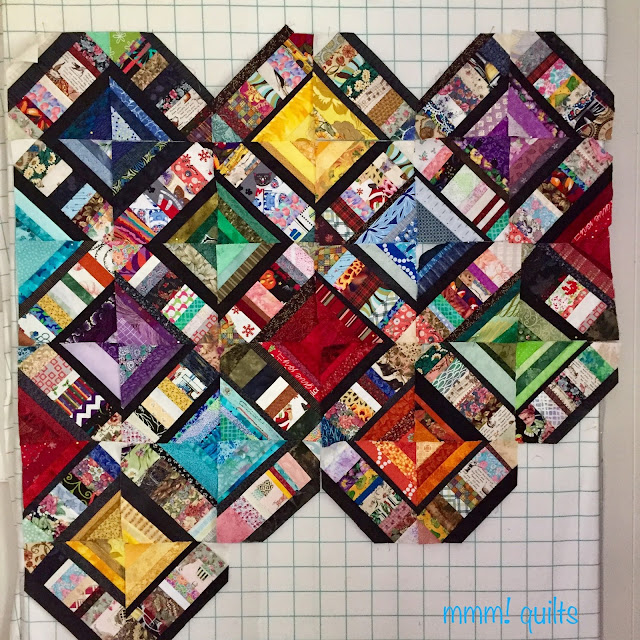 I think the edge half-squares are going to be alternating red and turquoise with the four corners in neutral. It hasn't evolved with any sort of plan at all, but when I saw what had inadvertently happened along the edges, (it's probably going to be 6X8 blocks) I like it. I've learned after the first couple of months to sew the colour of the month on one side of the centre strip unit, so that I can organize the colours somewhat.

Last month were lots of pretties again:
and this one, another stripes quilt:
Maybe it's making order out of seeming chaos that appeals to me, on many levels...

So what has grabbed you this past month?  Just a quick note that Craftsy (affiliate link) might...they've got all, I mean all, their classes on under $20 this weekend...SQUIRREL!!
Link up below, visit a few others, and watch the squirrels multiply!