That's a great song written by Leonard Cohen.  My favourite rendition is by kd lang. Both great Canadians. :-) I may have uttered that phrase, or at least heard the choir sing it, a couple of times over the past few days. I showed you on Instagram this little dish I made from beach glass I've been collecting on the shore of Lake Erie at Seacliff Beach, close to my home. 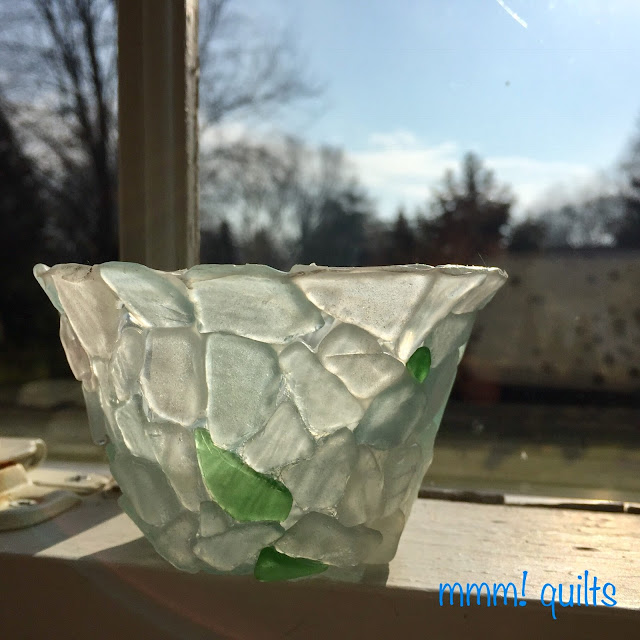 It looks so pretty in the sunshine! It really is that pretty.

I am fascinated by beach glass, but until rediscovering this beach this summer, I had not had much success at finding it. A few friends that also know of the beach's plentiful treasures think it's the way the currents flow around there that tosses loads of beach glass and a fair amount of lucky stones on the shore. Lake Erie was, sadly, quite the garbage dump on both country's sides, for decades upon decades.

Just yesterday, the wind was gentle, the temperatures quite lovely, though not as fabulous as Wednesday when we soared to 19C/66F! However, that day the wind was shrieking, so not great for a walk on the beach. We remedied that yesterday:
On a dog walk, it isn't as leisurely to keep stopping to pick up bits and bobs that one finds; however, I still managed to snag this treasure trove within a half hour: 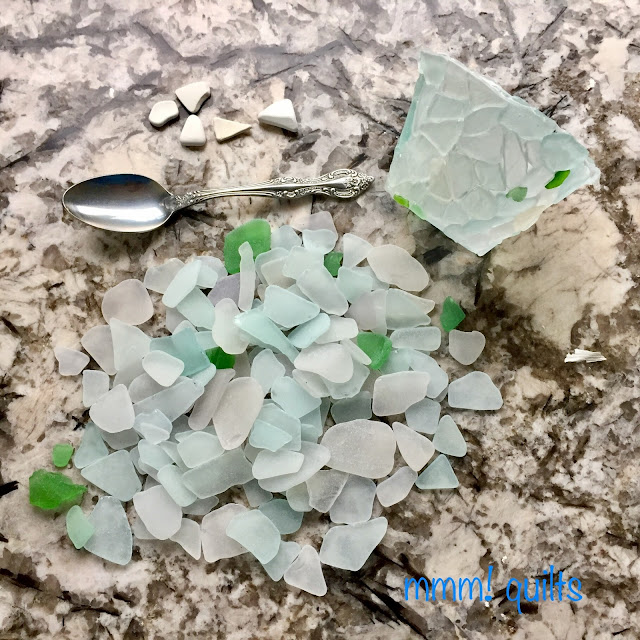 Trust me I ignored a ton of pieces. That's the most greens I've found yet in one stroll! The teaspoon is there so you see the size of the pieces and of the dish. I just love the sugary coating the glass gets after years of being tossed around in the sands and water. Some pieces actually have grains of sand embedded in them. Yesterday I found those five pieces of pottery, worn smooth, but no designs visible on them, as we have found before.

And YESSS!! One lucky stone more for my collection, this one, another J, quite faint (I nearly tossed it back thinking na, it's just a stone). But no, got home, had a closer look, and yup, definitely a lucky stone. You can read more about them in this post, but they are the basically the otolith, or ear bones of a sheepshead fish. These bones are particularly plentiful in Lake Erie, and have been found in ancient burial sites, so they were clearly prized then too. 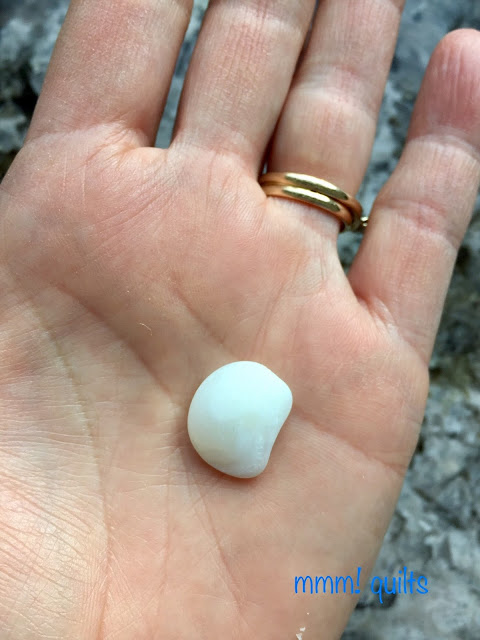 So how did I make that little dish?
I found this tutorial by Debi's Design Diary on Youtube.

The girl is a hoot, and I love that she shows you her first epic fail attempt, and then gives you some tips. I used a lot of glue, as she advised, Elmer's School Glue, but found that too much is not good; the glass pieces slid around, which gave me the kind of lip or angle you see at the top.  At first I was disappointed, thinking it would look dumb, but I really like the kind of curve that was inadvertently created! Also, the glass pieces are heavier than you think, and with too much glue, they don't stack, they slide around. I found that I was better off doing a few rows at a time, waiting a few days (I know, it takes forever to dry) and then adding a couple more. Below you see it after two weeks or so of building, drying, building some more, and finally taken off the original dish I used for a mold. 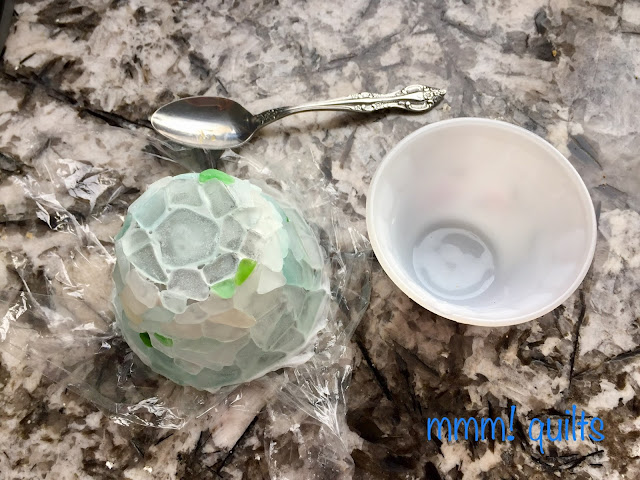 Another tip is in the wrapping of the dish you use as a mold. I wrapped it with Saran wrap as she says, but on my next one, I'd like to smooth out the Saran wrap on the sides of the dish somehow because the glue followed the folds of the wrap and created a bit of a crease-like effect inside the finished glass dish.

Here's a look at the creases: 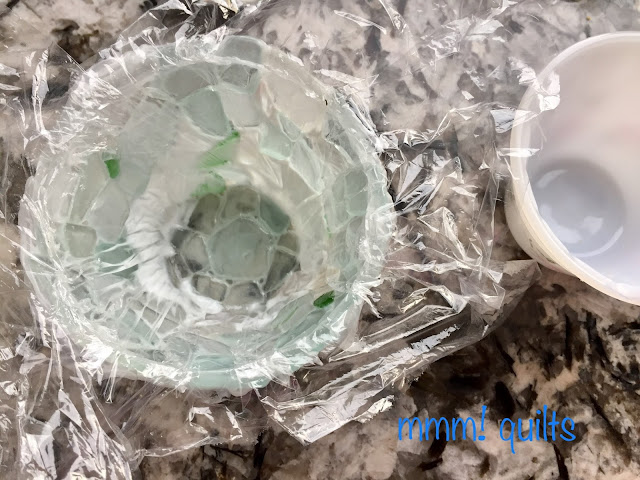 If you look closely, you can see a bit of a whitish line where the glue followed the crease line. This was only a day or two after I put the final row of glass pieces at the lower edge of the side. Where the glue is white and not clear is where I'd set in my final pieces.

Elmer's School Glue is the main glue I used but MacGyver also had some Weldbond I used when I was just about out of Elmer's. It dried faster, just as clear, and I think is even stronger.  Debi suggests using a Dremel to smooth out the top edge and remove any chunks or lines (as in those creases) of glue. So MacGyver got out his handy dandy Dremel and went to work. The first brush didn't do much of anything, so he went to a brass wire one. For future note, stay with the brass. It still wasn't removing the glue bits like he wanted, so he went to a stainless steel wire one, and that made black marks as it took off the glue. 😞 He tried to remedy it, but it made the marks darker, sniff. Oh well, this dish will be used as a candle holder, so not to worry, as the marks are inside.
All in all as a first attempt, and nearly an epic fail after the first few hours, I am super-happy with this! And the fact that it is made with garbage or trash found on a beach, each piece with its own story to tell, makes it that much more special.

Another near fail this week was this mug rug. 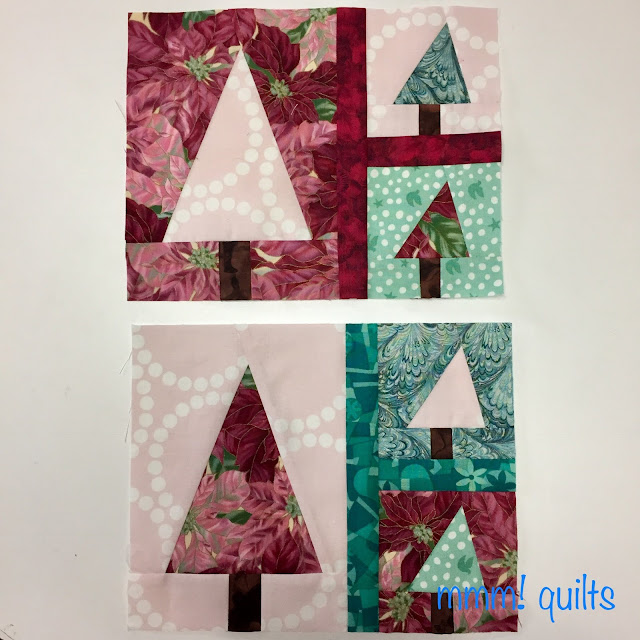 I did not pay close attention to my own instructions for the Leaning Tree mug rugs...doh! The big tree should be oriented with the wider edge at the bottom. Therefore my tree was too tall and not wide enough.  Sigh. I'd already cut the pieces for the mini trees, so how could I salvage the big trees? No trunk? Hmmm, a possibility, but they wouldn't match the mini trees. then I thought of putting in the frames so the mini trees would equal the big tree height. But then the mug rug was too narrow, so I added the frame between the big tree and mini trees section. Yes! It works! "Hallelujah!" this time of the Handel Messiah kind!

I love these soft pink and mint colours together; reminds me of candy ice cream we used to get at Christmas...do they still make it? The best was Lucerne's my mum bought at Safeway. Yum! I can totally taste it just thinking of it. Once I quilt these, I'll post the finish. Ha! I only just now see I should've paid better attention to the mint doves fabric when used as the background; the doves sure are doing some trick flying!

My third topic is a bit of a fail. Sadly I do not have my OMG One Monthly Goal, finished, the flimsy for the 150 Canadian Women quilt. Sniff! I do have all 150 of the 1.5" X 6.5" sashing pieces sewn to each block, and I did find the most perfect fabric to use as the cornerstones, which I showed you in the DrEAMi! post just before this one. Ah well, two out of three 'ain't bad', right?!

Posted by Sandra Walker at 3:07 PM