In some ways it feels like I never left, and in others it feels like I was away a lot longer than 3.5 weeks. I'm in that in between time when I keep revisiting moments and places of the vacation, dreaming it, and then morphing, mirage-like, into my regular life with the what time do I have to do such-and-such, and we need some groceries, and what about banking, and oh, let's go see the tall ships in the Kingsville harbour! 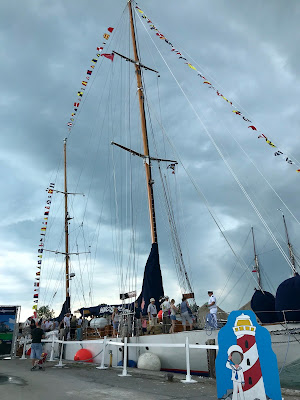 Wonderful. Magical. Mystical. Inspiring. Mighty. You can read more about the festival, and see much better photos here.

I did manage a wee bit of sewing to get my Tiny Tuesday RSC quilt back on track.


I had two pink blocks to make and two light or bright blues. We are back into blues in August which is good, as my blue container overfloweth big time.

Here are the pinks: 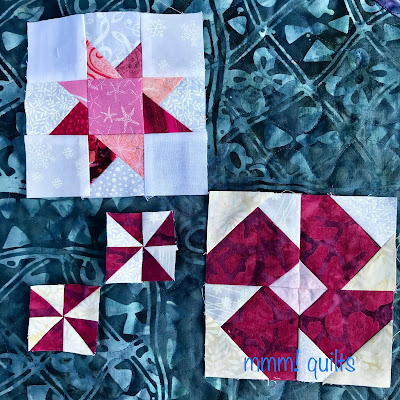 The first was the wonky star, which took a few episodes of reverse sewing. Both my husband and I picked up a bug; in fact we both noticed a very sore scratchy throat not long after getting off the plane. The bug also affected the gastrointestinal tract, started off with a horrific headache, and now has morphed into a head cold. Thank goodness the headache only lasted a day, and that my nose has finally as of Sunday morning started to slow down. The other stuff let's just say didn't last too long for me. So some of the not-so-great stuff in these four blocks I'm putting down to feeling poorly, as they say in the UK, two of whose countries I visited.

The second and last block for July was the flower block, called Violet. I used a bit of the intense fuchsia from Ripples, which was my Beat the Heat Blog Hop quilt for Island Batik. We are in the third week of the hop with more giveaways going on. That link will take you to Island Batik's blog where you can see the lineup for this week, as well as check out the previous two weeks in the weekly roundup of posts, many with giveaways. If you didn't get a chance to enter mine, be sure to hop over and see my quilt, read the story, and enter the giveaway! As for this violet block, I wanted a light pink centre, but I think it's too light, so I may yet unpick and insert a little deeper of a hue or maybe even a pale yellow or deep purple. As you can see I insanely sewed the cut-offs from doing a snowball method on eight corners, to make two pinwheels, each spinning a different way. They sit at just under 2" and will finish at about 1.5". 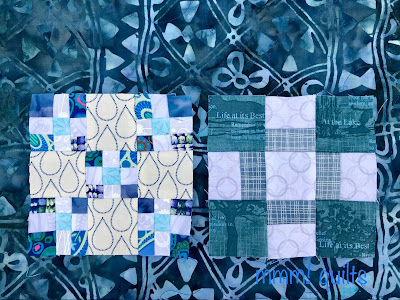 Here are the first two blocks for August, whose colour is light and bright blue. We've already had dark blue, and turquoise. Again, I'm not so sure on my double 9--patch choice of background for the four squares, seems too busy with the tiny 9-patches light and medium blues. The second one is leftovers from my Henry Glass Desire to Inspire Challenge, from 2016, and yes, I fussy-cut those 2" squares. It also has leftovers from my Snowman placemats, from 2013 (the fabric is a little bit older than that!), and the white is from my Leaning Tree mug rugs from 2017! I love combining lines and years like that. 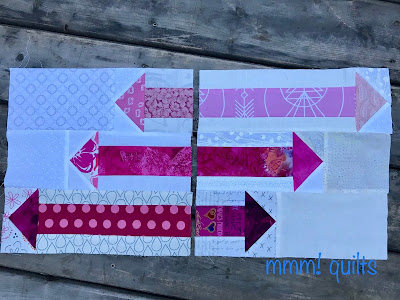 I also got the pink arrows blocks done, and the blue ones all cut out. I really like the way these pink ones turned out.

By now you all know how much I love living on a Great Lake. This weekend my town, Kingsville hosted five, yep FIVE tall ships in a Tall Ships Festival. Had I not just got home from 3.5 weeks away, and been sick, and had extra yoga classes to teach, I might've been more on top of this festival. I did get down to the harbour, but Mother Nature had a bit of a nasty storm, and just as I got down there, they were evacuating the dock because of the severity of the lightning. I managed to get a few pictures, and only got a minor soaking getting back to the truck.


We have a working harbour, which means there is an active fishery here, La Nassa Foods, which processes the daily catch. You can see their building on the left. I love at times hearing the chug chug of the fishing boats as they go out in the early mornings. We also have an eyesore of a gravel yard there too, much to most of the town's dismay. However, big freighters do come in and out, and unload and load it for various destinations.

It was a good break, good to step away from the blog and the machine. But it does feel so good to start once again to piece bits of fabric together to make pretty things. 😊 I'll be linking this post up with Angela at so scrappy.

For those observant types, you may notice a shuffling around in the sidebar buttons. I discovered that I am, in fact, still an affiliate with Connecting Threads! I don't know what happened, but maybe they opted out and then opted back in to the affiliate programme? In any event, I am glad. I have continued to support them, even when I thought I wasn't an affiliate, especially love their cotton threads, as does my longarm Avril, so that should tell you that I do think very highly of this company.
Posted by Sandra Walker at 6:00 AM