I've spent my first week back just having fun messing around in my scraps. Do you find sometimes after you've been away, getting started sewing again takes a bit of time? I meant to dive right back into Brady's football quilt, and only take a day or two to catch up with the Tiny Tuesday and arrow blocks, but there's something so satisfying to me to just delve into my scraps and make something pretty. So I did. I am officially 100% up to speed with Tiny Tuesday and my RSC arrow blocks project! 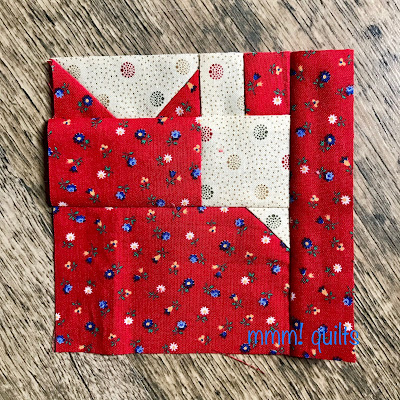 Here is the January (red) Tiny Tuesday block 3. I have very little left now of the Cranston red floral print I made the cat out of. It was from those infamous smocked dresses I made my girls in 1989.
You need to see a photo of the dresses I think. 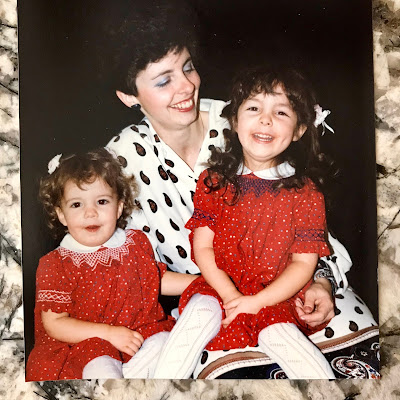 I even made the dress I'm wearing here; I sewed most of the clothes for the three of us girls. That was a gorgeous wool/rayon blend challis border print. Brianne was 3 1/2; Dayna was 19 months old.

More travel back in time ensued with block 2. 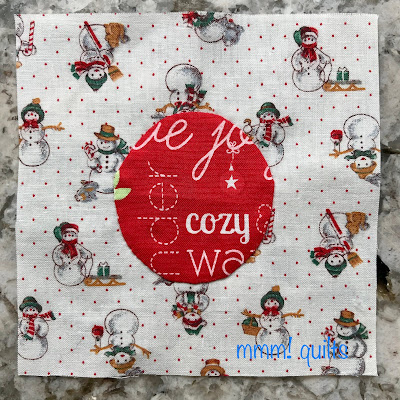 Each week since I squirrelled my way into taking on this new project back in April, I have been doing the current block and going back in time week by week to make one that happened before I'd been bitten by this cute little squirrel. For block 2, it should've been a bigger circle, but that was all the size I could do with this favourite Christmas print I used for Brady's stocking and a Christmas cushion both made the year I was told by my daughters to make the house look like "Santa barfed up Christmas all over the place". The snowman fabric is even more ancient than the smocked dresses fabric, maybe from the mid-80s when I was cross-stitching Christmas ornaments and used this to back them. I think it's such a sweet fabric. 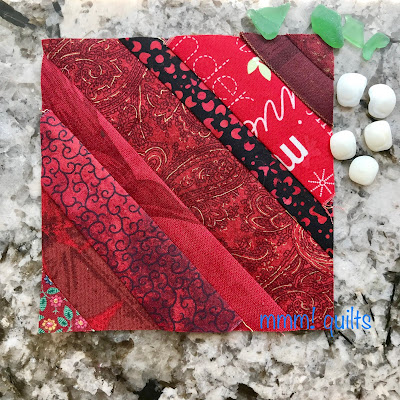 I love string blocks. There's a little beach glass from last week's beach stroll in the early morning, and five lucky stones, aka otoliths, which are ear bones from a sheepshead fish. You can read more about lucky stones in this post.

And currently, this week's Tiny Tuesday block is a quarter log cabin block with logs that finish at 1/2" wide! 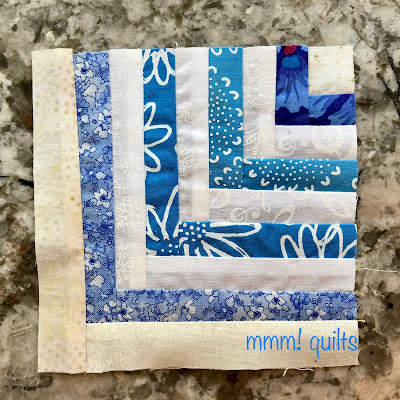 August's colour is light and bright blues. I used two blue scraps and one white from my Sweet Star quilt which I plan to sew together this weekend. The final blue is from Sunshine on my Shoulders, my Auntie Norma's quilt, and the first blue is a Kaffe Fassett from Harbinger of Spring. The whites well, are from several quilts.

Lastly, I did decide to rip out the centre of the Violet block and replaced it with a fabric that's a little more vibrant: 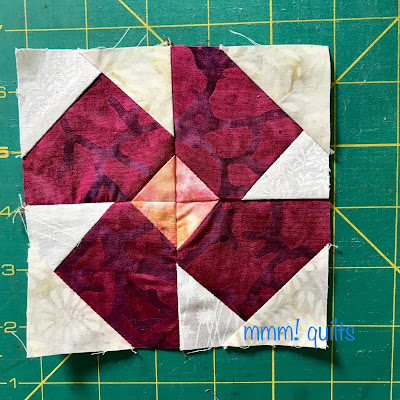 A teeny wrinkle or two ensued, but I'm okay with it as the quilt will crinkle up anyhow once quilted and washed.

Now all that's left is to sew the sashing on for those blocks that are straight set, and those that are diagonally set. That means I have to decide what I'm going to use as the background; right now I'm considering a pale grey or a pale blue. It also will depend on the yardage in my stash as I am not buying any fabric. I've been on a not-quite-intentional fabric diet all this year, and I've been doing fabulous. Of course I am not counting the fabric given to me by Island Batik and Benartex...

Here are all the blocks, snaking their way around my Raffi the Angel quilt, which will be featured on Throwback Thursday in September. The first Thursday of each month I, along with Andrée host a linky party where you can link up a post about a quilt you made from days of yore, aka pre-blogging days. 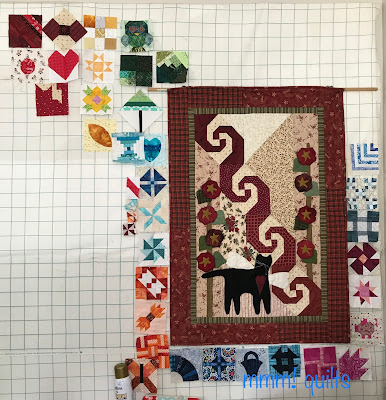 I am caught up with my main RSC project, my Arrow blocks: 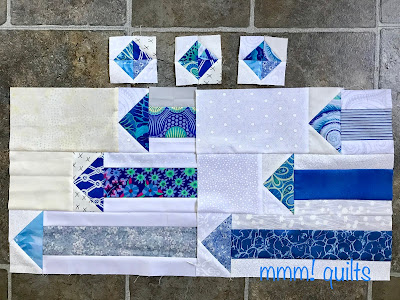 As usual, there are the cut-offs sewn back together into the squares on point for a side RSC project. I know now how I plan to set this mini quilt, and I'm excited to put it together soon!

I've also made great progress with my scrap boxes, sewing improv-style the four side panels for four more in between making these Tiny Tuesday and arrow blocks. Now to quilt and assemble them. That will be for another post.

Another to-do item is nailing down my September Island Batik baby quilt which will be using the Bear Paw AccuQuilt Go! die. This last week of August will again be a bit quiet on the blog as I work on the aforementioned projects, as well as on two patterns I plan to release asap, and enjoying our deck and yard. I've been reading blog posts, but often on my phone, where I can't comment on those who use blogger, so know I'm not ignoring those friends whose posts come into my inbox.

Linking up with Angela and the gang for Scrap Happy Saturday at so scrappy.
Posted by Sandra Walker at 5:27 PM