I'm back to working on Fleurs again; she's not been forgotten, just set aside for a bit.

You may recall I am at the "Final Pieced Border" stage of my guild's Round Robin that was due in September.  Yeah, I didn't make it.  I am not giving up on her, however.  This quilt is kind of like an ornery teenager:  you love her dearly, but god, she can make you spit nails...

Here is the trellis border, in keeping with the fleurs theme:
Here is the progress: 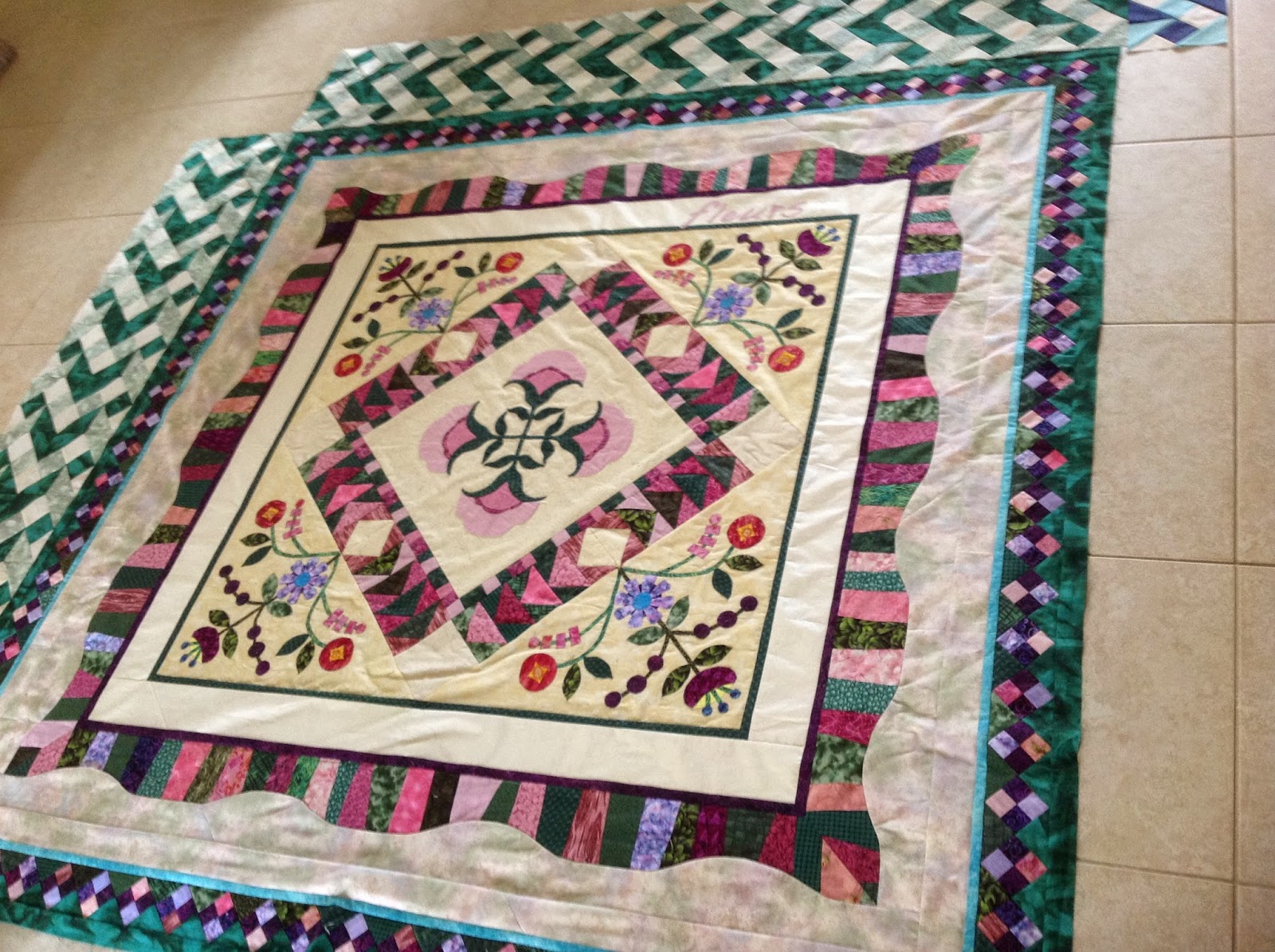 One side is sewn on; the other ready to go but for trying to figure out how to turn the corner.  Moreover, I have another conundrum:

It's not always Bella who immediately lolls about on a quilt when it's placed on the floor... 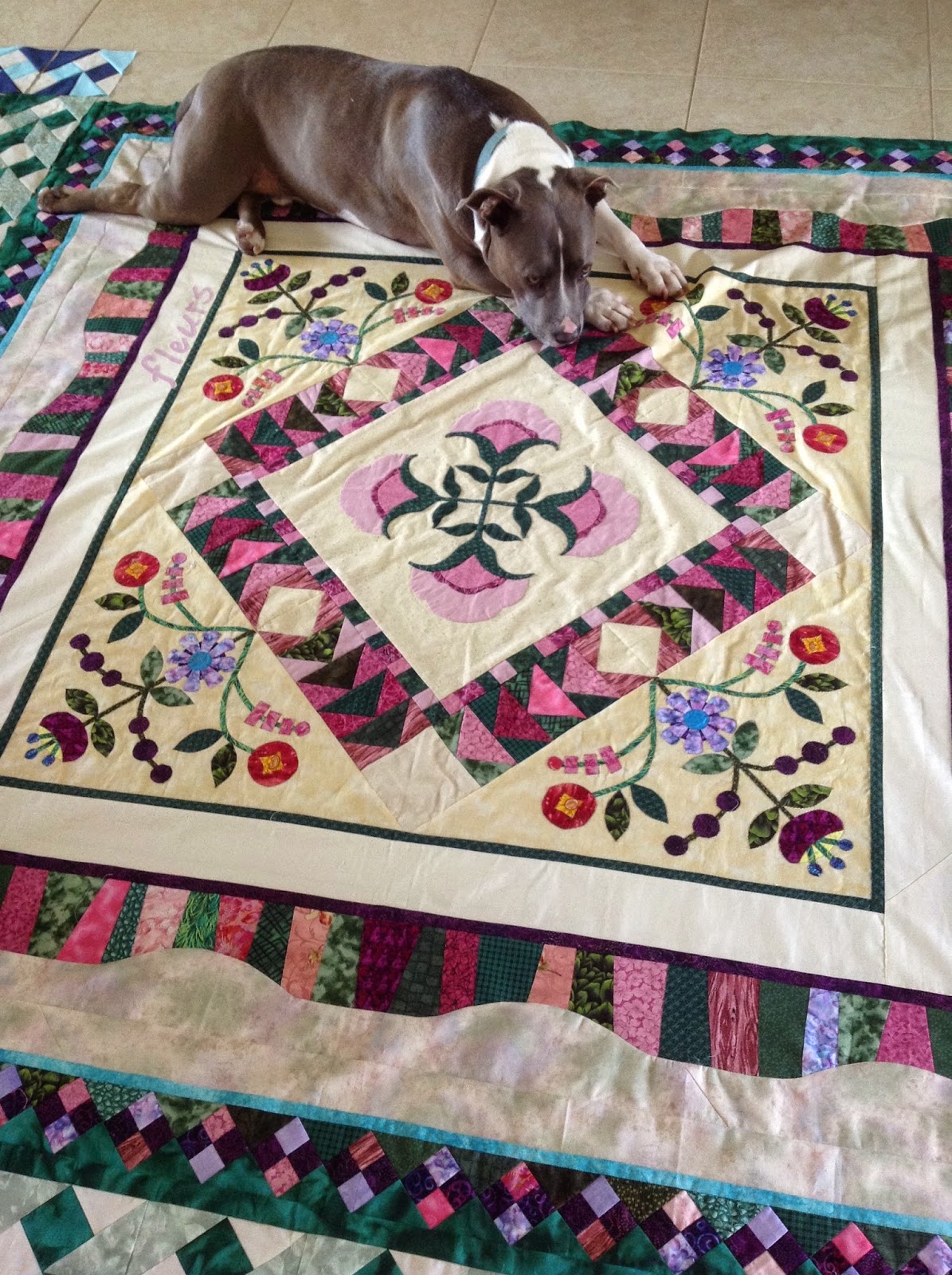 I played around with four blocks, trying to get a smooth transition in the corner.  I think this could be it!  If I could replace the two light green 1/2 square triangles on the right side of the block of four, I should get another "v" or arrow shape.  Do you see where I mean? This is one twisty-turny block. 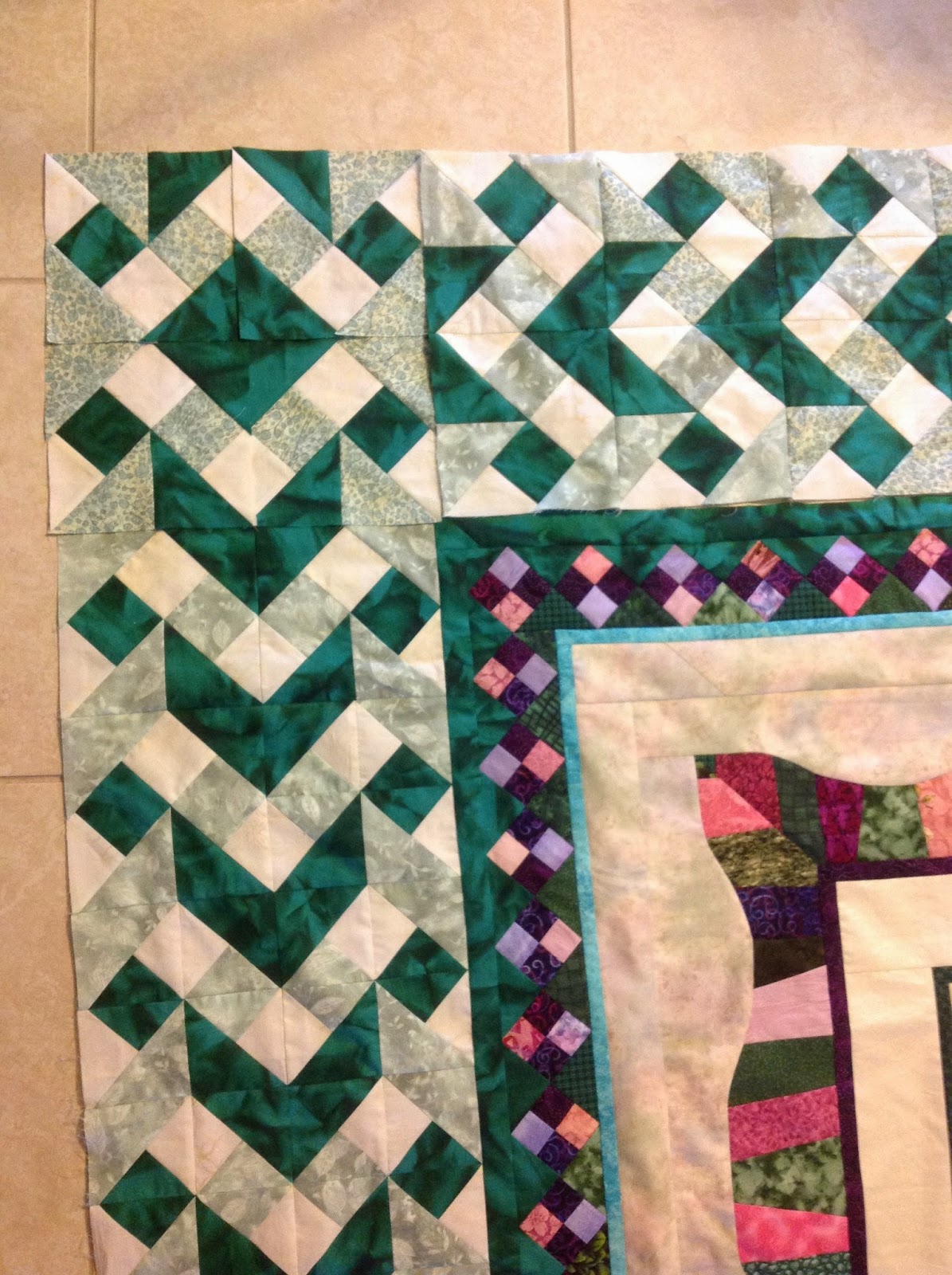 Below, you see the two I mean.  I placed two cut triangles on top of the pale green ones.  Yes! 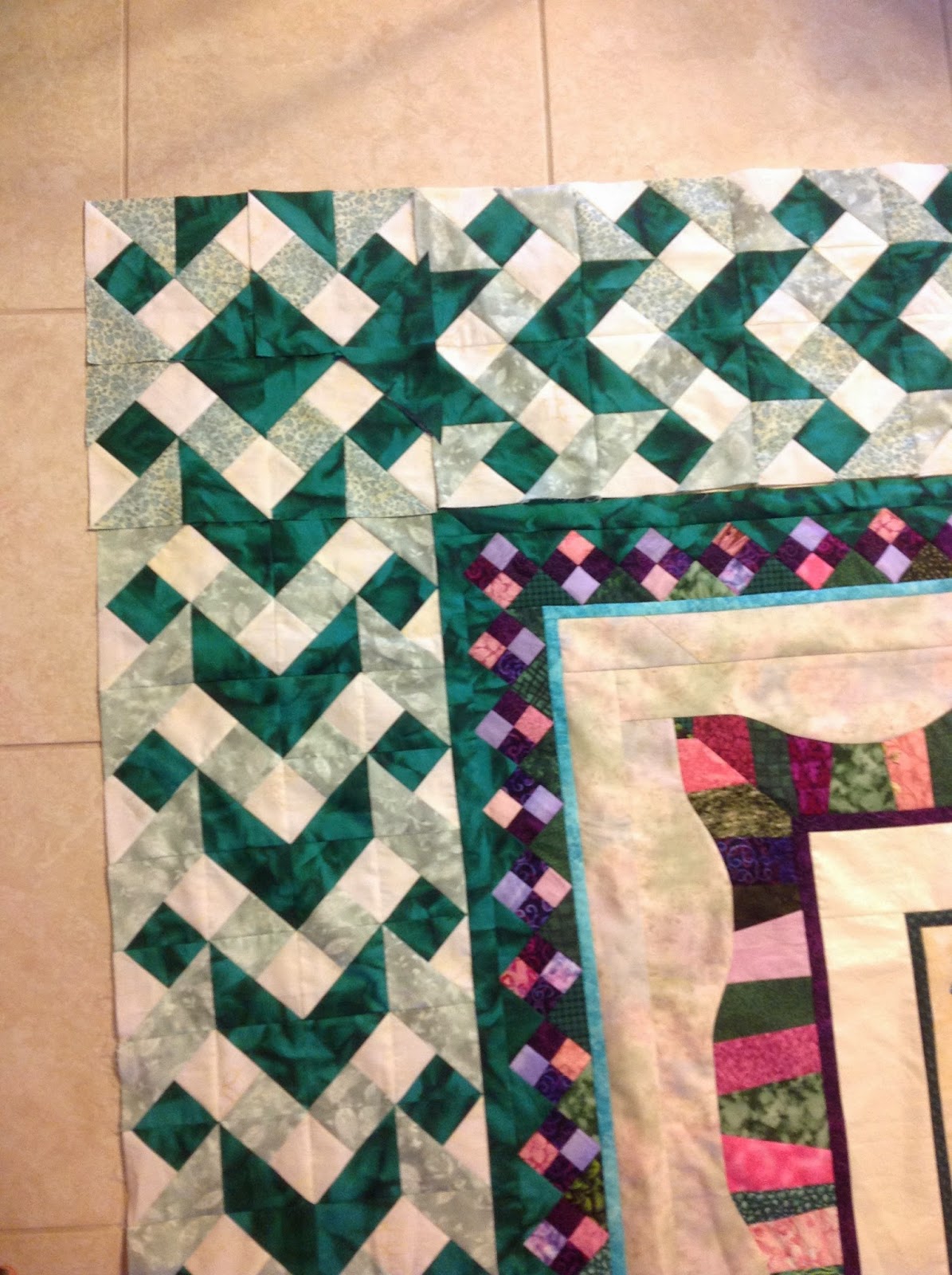 Unpicked.  Inserted the new triangles.  Sewed the unchanged two blocks together.  Brought that pair back and the newly inserted dark green ones to make sure I oriented them right.
Remember, I only have the two new ones to orient correctly.
Note that the pair on the outside is already sewn together. Here I'd just flipped it top to bottom!

Thank god I'd taken a picture of my original plan before I'd even begun to unpick... 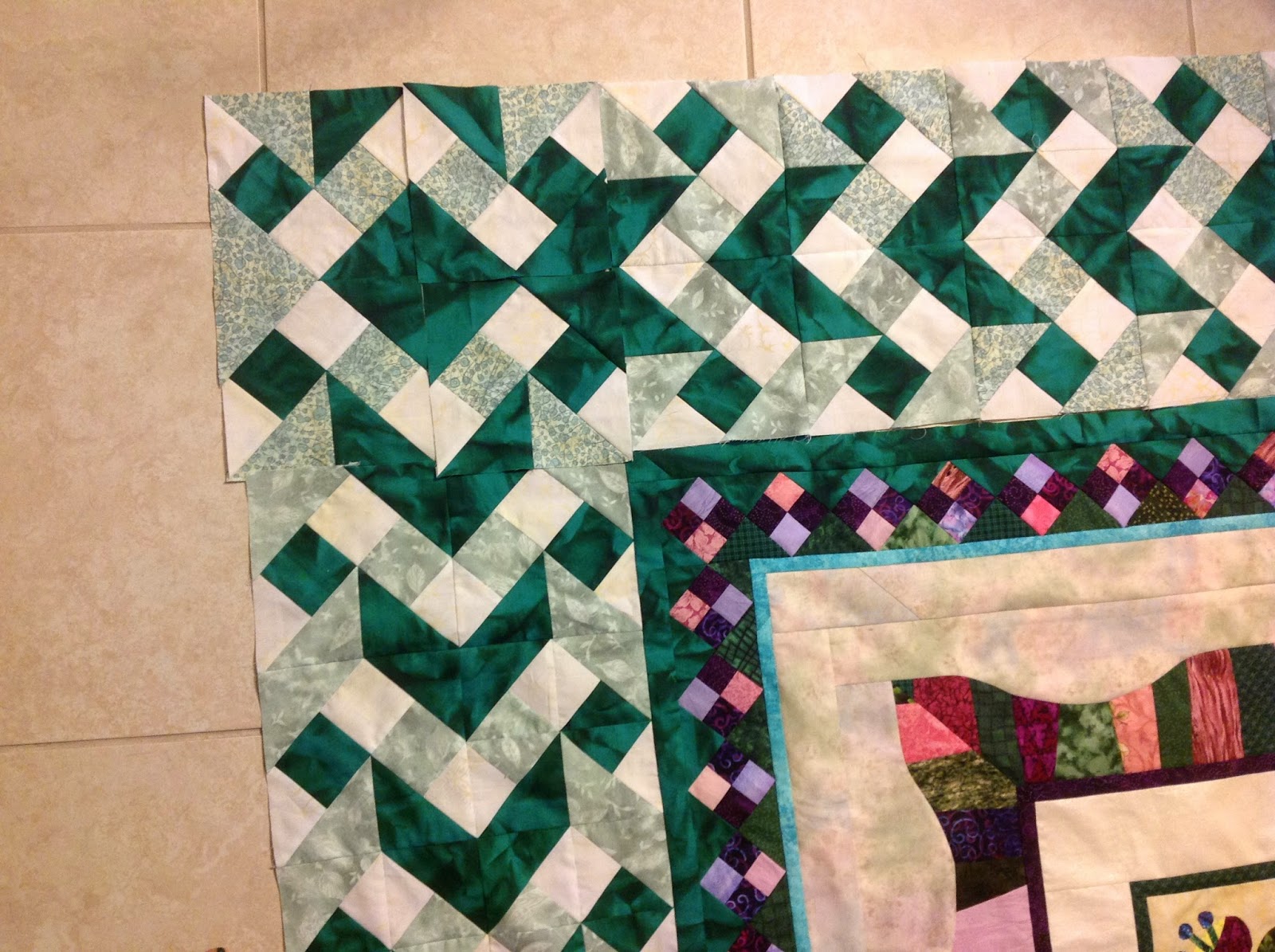 I think this will work.  Next problem, well there are two.  The first is that I have run out of pale green.  Did you notice there are two pale greens in these pics?  I found a close match in my stash, but it is GONE, as in the two unpicked triangles are it and one 2X3.5" rectangle.  No problem; when this sad state of affairs hit me about a month ago, I'd already decided do two sides of the border in dark and that turquoise you see the hit of in the picture above.  This happened to me on a previous quilt and I LOVE the effect.

The second problem is that I am reading SUCH a good book right now and I cannot stop thinking about it or finding ways to "just read one more chapter"... It's The Bat by Jo Nesbø.  It's the first in the Detective Harry Hole series, and, like the 4th one (the first released in North America--are you confused yet?!) which I read last winter, it is immediately gripping, makes you think, revolts you with murder descriptions (well it does me anyhow), and makes you both love and get mad at Harry.  He has his faults.  More of them than Jackson Brodie, Kate Atkinson's detective (great books they are too.)

Posted by Sandra Walker at 8:55 PM