I can show one finish, now that it has been given to the recipient.
This is another of Joanne's Snowalong paper-pieced snowflakes, #3 to be exact.  I made it back in October, knowing it would go to my daughter, Dayna.  You can purchase the patterns for all 7 snowflakes through her website link to her Craftsy store.  They are a mere $3. 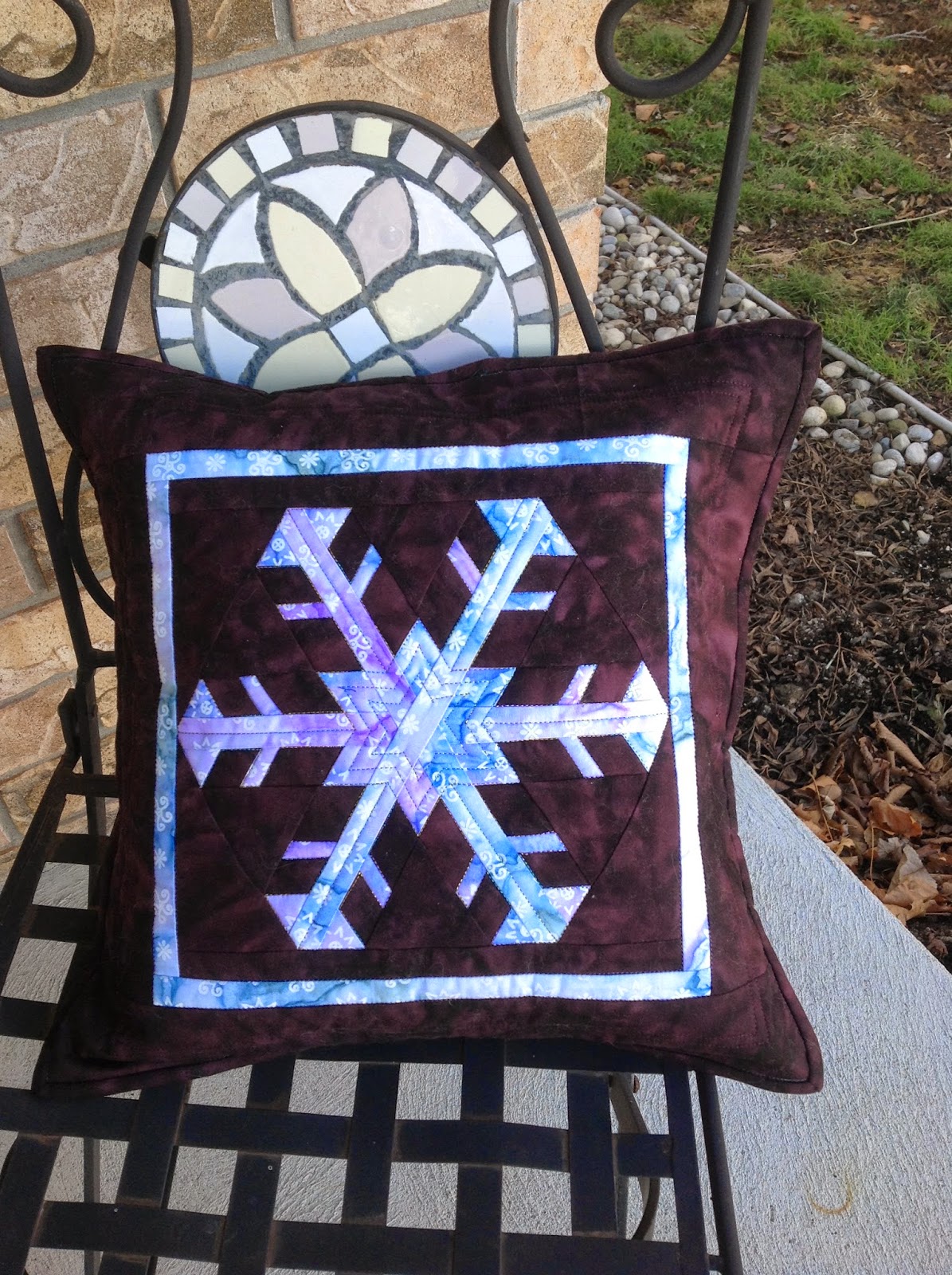 Here it is after I quilted the front of the cushion cover. Wow, what a difference from under my Ott-lite to outside, no?! 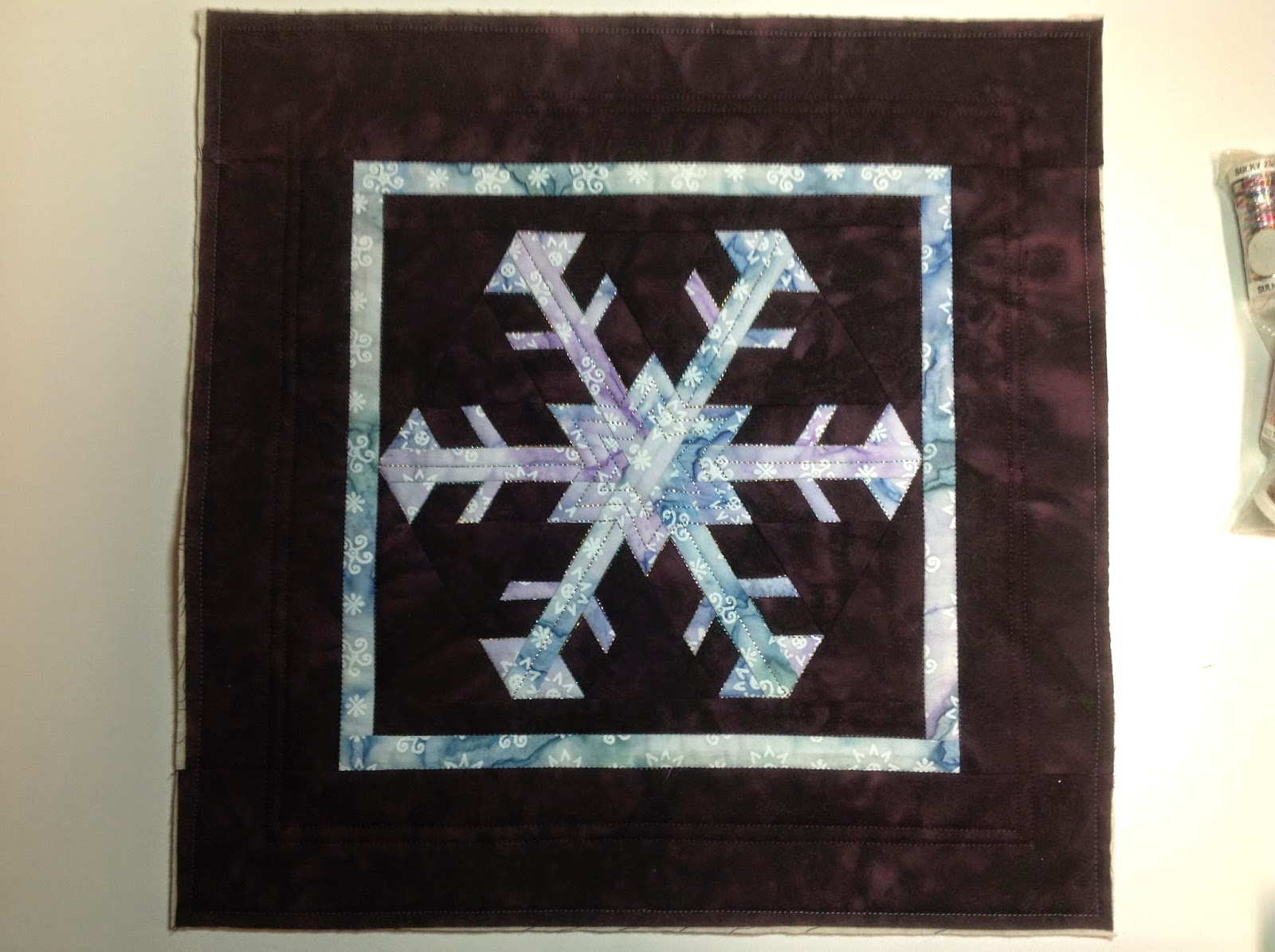 A last shot of it with Lake Erie in the background (we were leaving for Florida the next day). 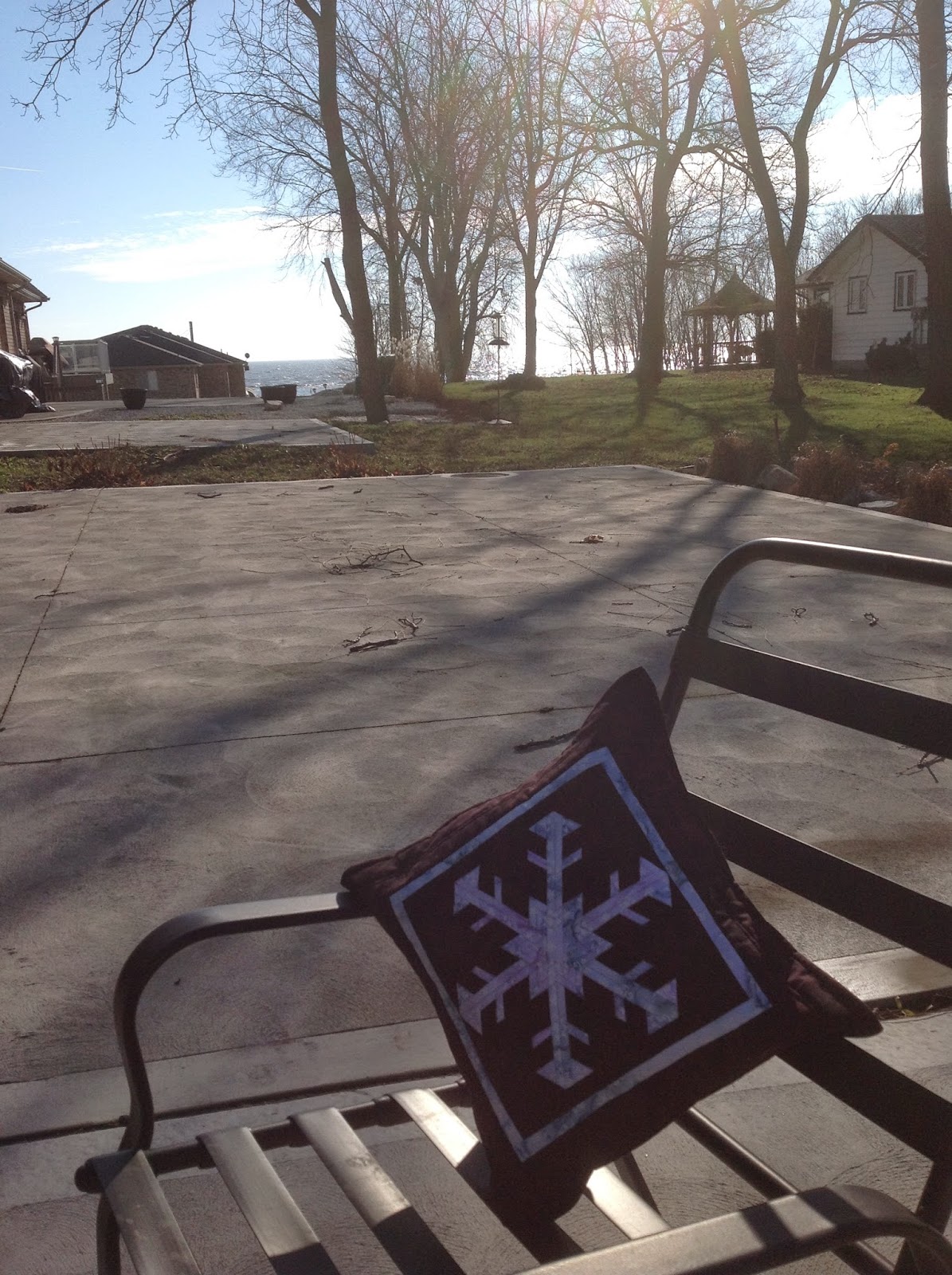 We'd already had a bit of snow at that point, but it had melted.  I discovered, and rediscovered two very handy tools during the binding of this cushion. 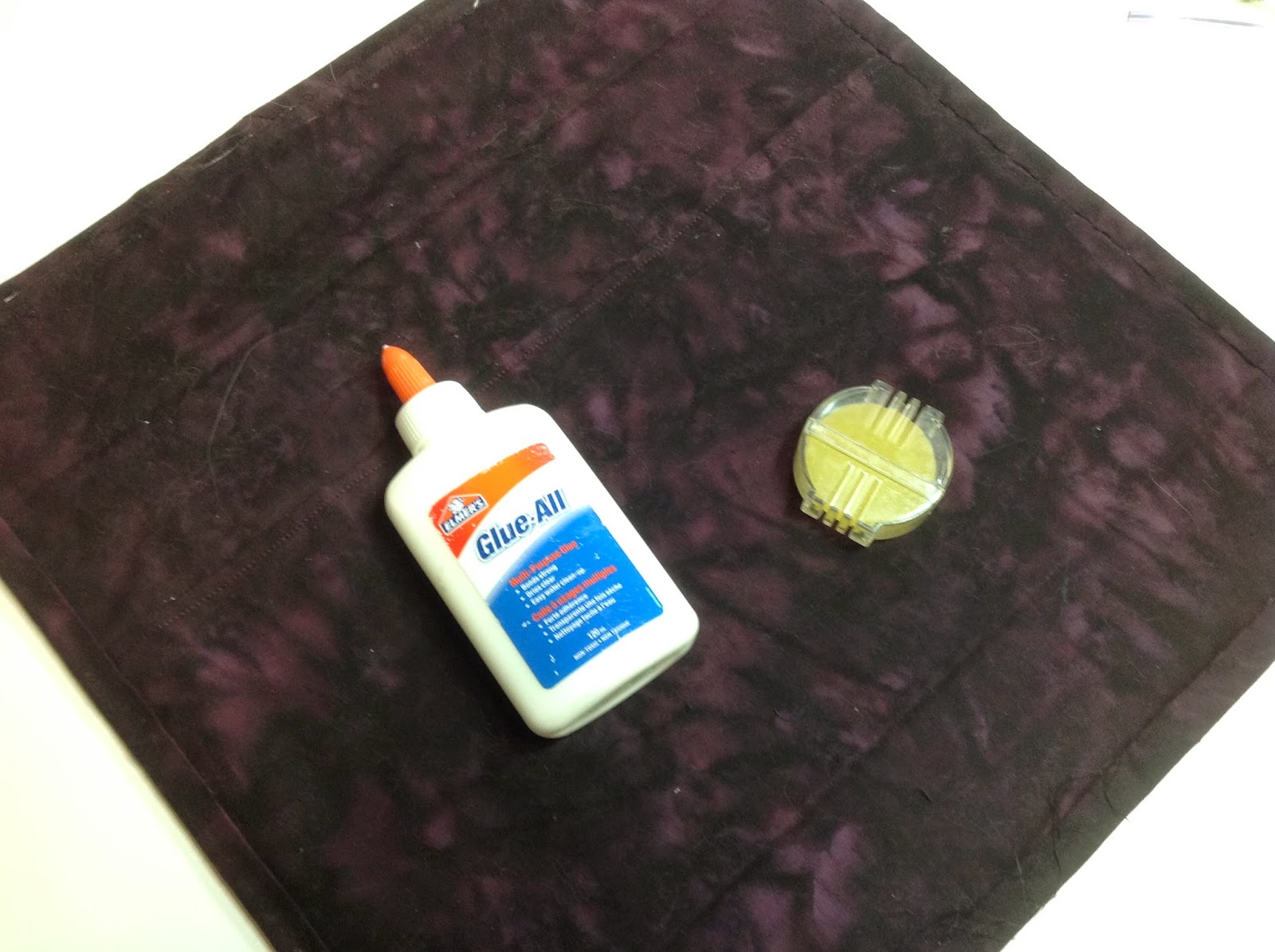 I followed Sharon Schamber's binding tutorial exactly this time, and as I mentioned before, I am pleasantly surprised at how well I was taught: outside of the glue and the ladder stitch she uses, I do my bindings exactly as she does.  It pays to take classes at your LQS!!  Or now online, lol, as mine was nearly 20 years ago...

Anyhow, first discovery was glue: I glued the binding down (look, no pins, ma!), and the rediscovery was beeswax: I remembered a tip from an appliqué class I also took at my LQS way back.  Run the thread through beeswax to help reduce tangling.  This time I tried Sharon's ladder stitch, and quite liked it.  After trying out the new techniques, I then went full-steam ahead on the binding on Savannah, which, as you know, I mostly stitched on the trip down here.  Having no pins to worry about in the SUV was a most-welcome perk!


I nearly didn't include that shot, but she is so darn adorable in the way she is so fascinated by pretty much every part of the quilt-making process.  This time she was especially intrigued by me hand-sewing the binding down! She didn't grab for the thread, just watched intently. And would gaze at me every once in a while... 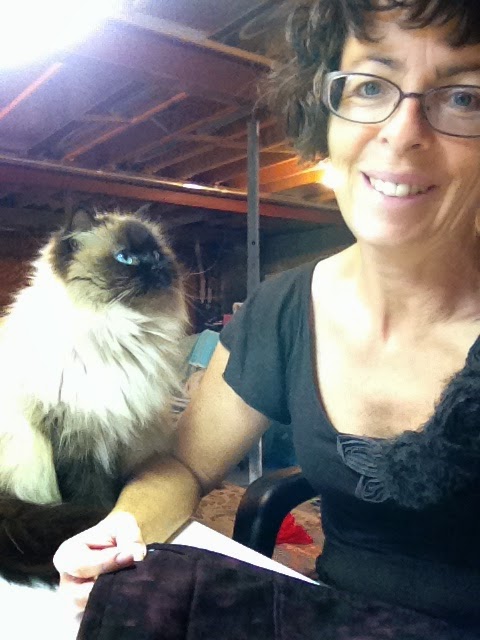 The back.  This shows the richness of this gorgeous batik. 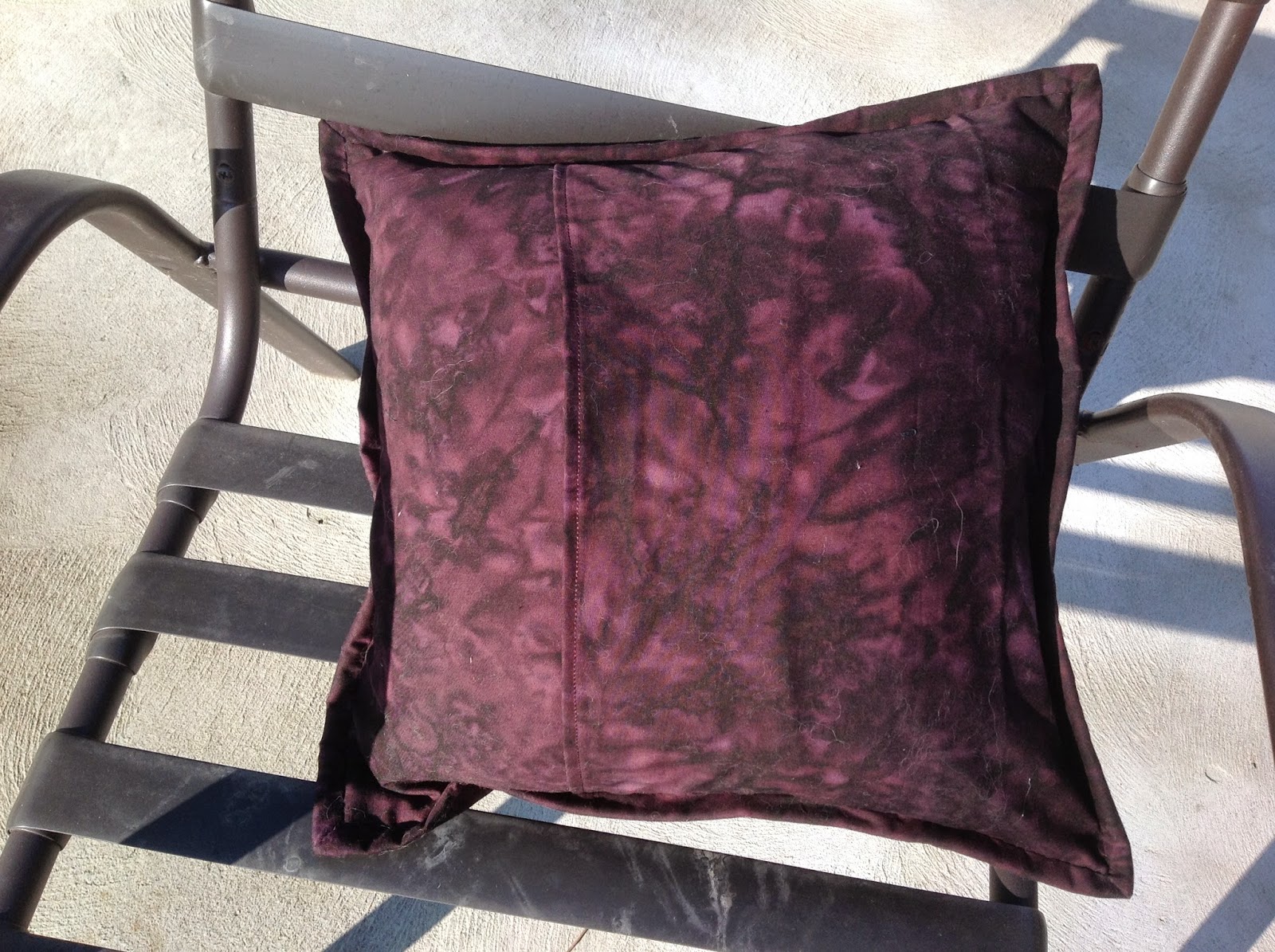 A another close-up of the quilting.  Again, I used Sulky Holoshimmer for sparkle! 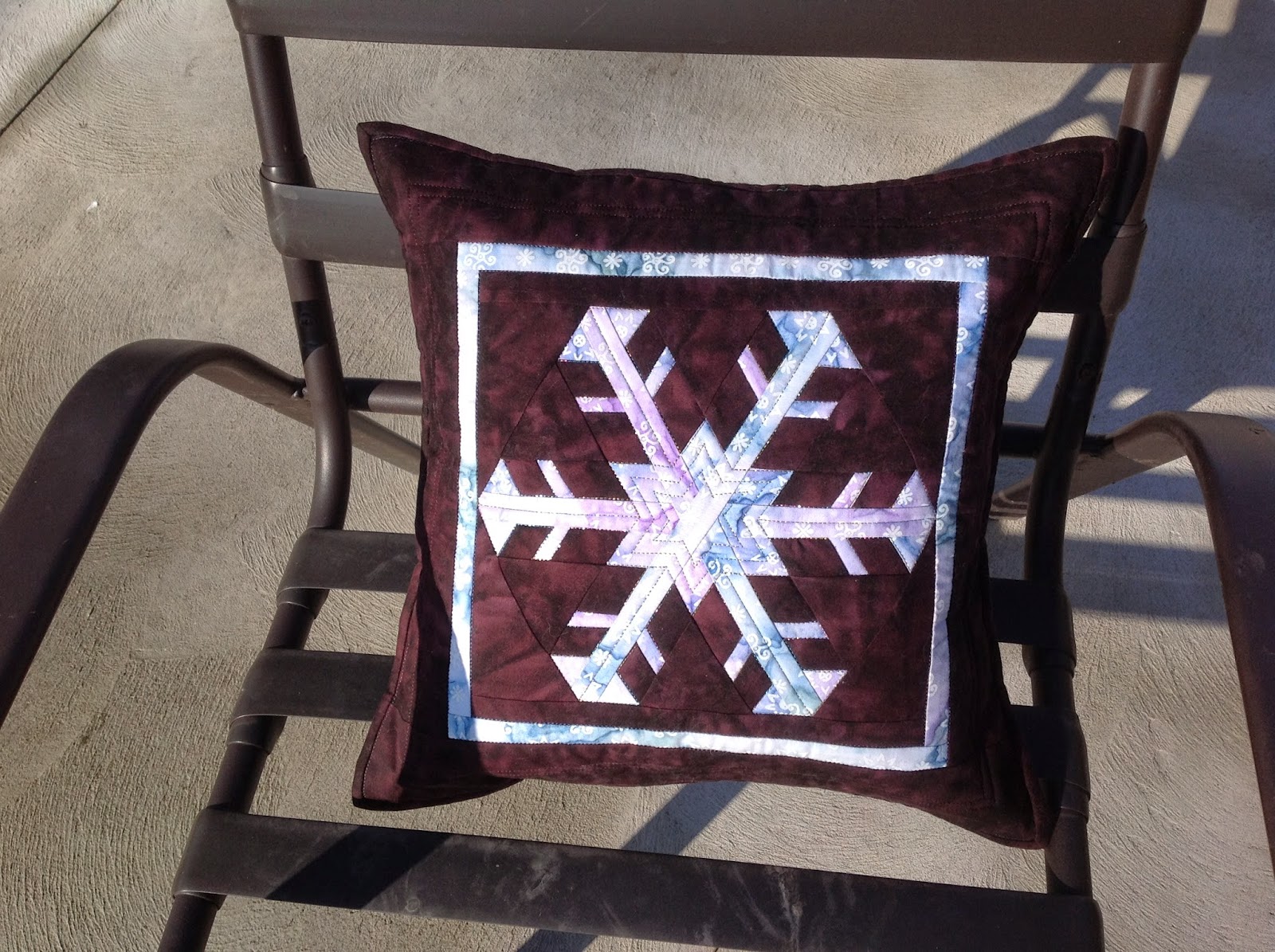 My second small finish is using the Riley Blake fabric Lara so kindly sent me a few days ago.  Did you guess what it was I was making? 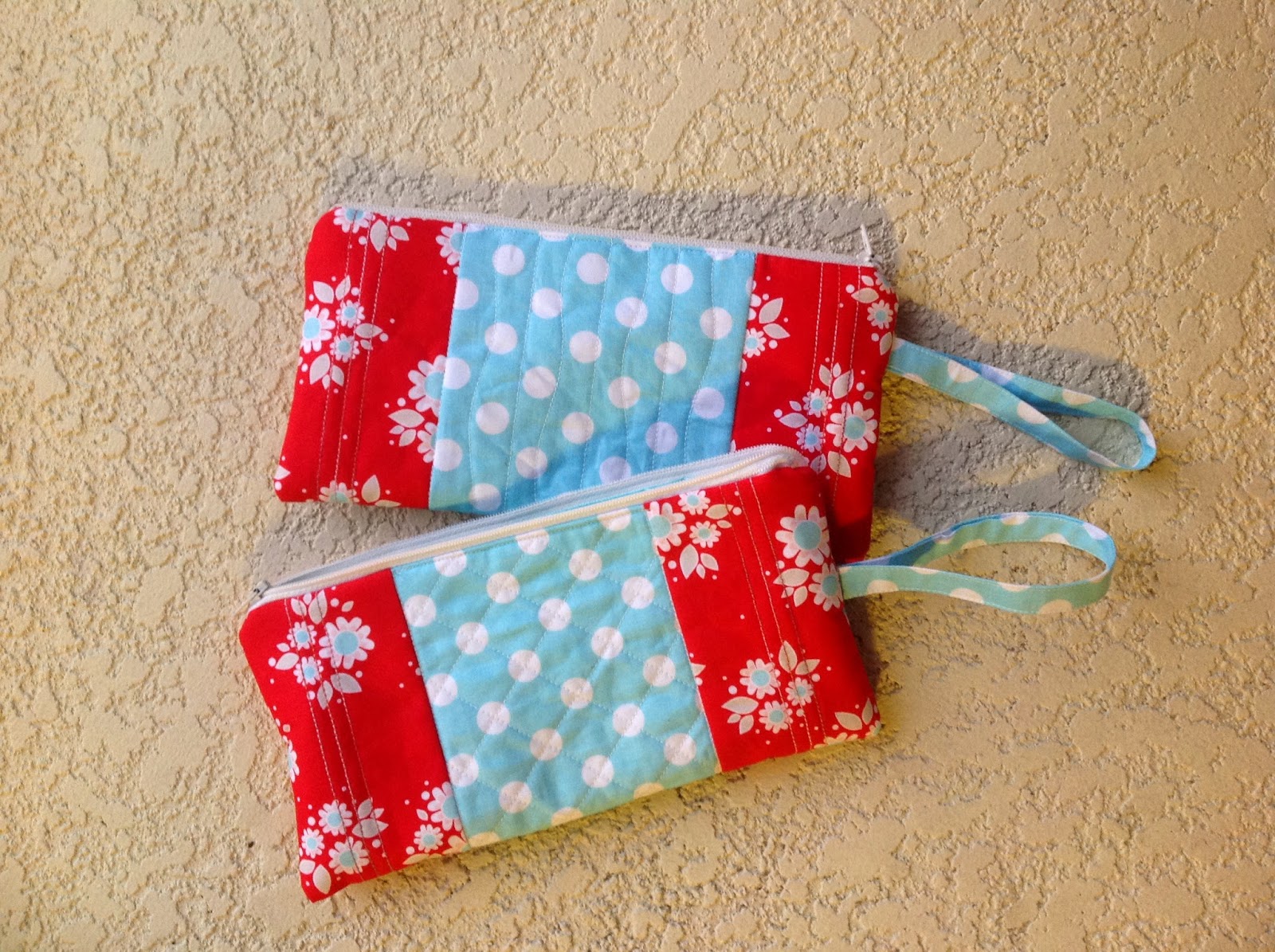 Two make-up bags.  I used The Cake Clutch pattern on Moda Bakeshop.  I made a couple of changes. First, instead of top-stitching the polka-dot piece onto the red main piece, I pieced it in.  This way I saved fabric (of course!) as well as reduced bulk.  Second, I edge-stitched the centre piece along the zipper to help keep it from catching in the zipper.  I'd do that before I sewed up the sides next time I make one of these, so I could stitch along the entire length of the zipper.  I love this fabric combination! So happy.

Best of all, I worked with the laminated cotton she also sent me.  Nice touch for the inside of a make-up bag, I'd say! 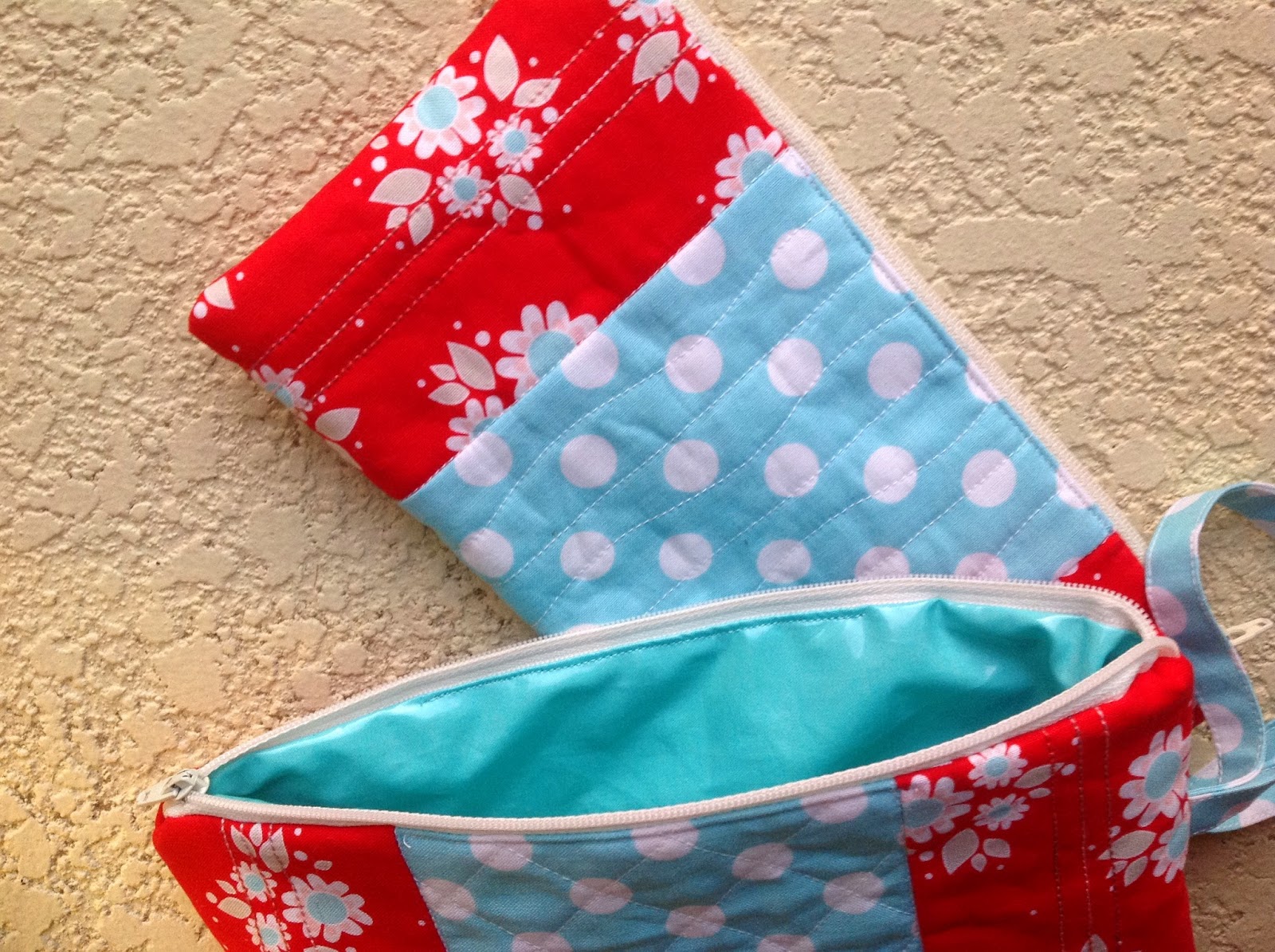 I used Gutermann 50 wt cotton in white for the quilting I did in the polka-dot sections.  No marking, just aimed for the centre of the dots for the cross-hatching pattern, and for the other I did straight lines and a gentle wave (no marking, qué sera, sera feel, aka 'organic' feel) all with my walking foot.  In the red fabric, I centred 3 lines spaced 1/4" apart using Sulky Blendables in 12 wt.  Easy.

And now I'm behaving, getting back on track by sewing up my trellis blocks for Fleurs.  Hope to have this flimsy done asap!

Linking up with TGIFF hosted today by Sarah at Things I Make as well as with a different Sarah of Can I Get a Whoop Whoop at Confessions of a Fabric Addict.