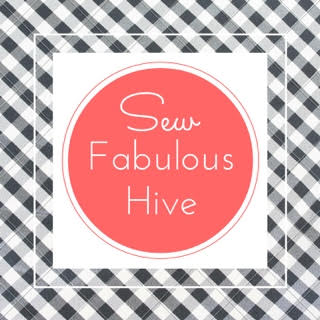 If you hop over to one of our four hive mamas, then you will see the other bloggers in this week's hop:
Yvonne at Quilting Jet Girl
Teri at Childlike Fascination
Cheryl at Meadow Mist Designs
at my hive mama's, for today (Tuesday) you will find some cool Tips and Tutorials!
Stephanie at Late Night Quilter

Remember there are some great prizes to be had!

In random news in my world, the quilt back is pieced, well, nearly.  We've had an eventful last 12 hours, beginning with quite the storm, so bad that Point Pelee National Park is closed today as they deal with downed trees and still a power outage.  Our power was out from 2:30-8 am, which I would like to say is why I am only finally getting this post up but that is not true...  Our dogs are now terrified of storms as of this winter when a smoke detector in our Florida home suddenly went off and we could not get it to stop, and it's hard-wired in...the dogs went totally to pieces, trembling useless blobs of fur, poor babies. I know how much that sound hurts my ears, so I can't imagine how it must feel to a dog's sensitive ears....and it went off again a few days later...and then a few weeks later, Naala came running into my sewing room, belly low, ears back, shaking like a leaf, and I realized why: my husband was watching a video on YouTube that had some high-pitched "beeps" on it, and she thought the alarm was going to go off again. Poor poor baby.  Of course, with the power out, our alarm here, which is also hard-wired in, was chirping every hour or so, which sent Naala to the edge.
Rocco jumped in bed with us, yep, big 65-pound raging pitbull that he is....NOT...and would NOT get out.  Sigh. So we let him stay, safe between us, Naala pressed against the bed so my husband could reassure her, but she stayed on her bed.  Not a lot of sleep was had by anyone for most of the rest of the night.

I had a much-needed pedicure appointment this morning which we all walked to. It turned out to be a lovely day, and I love the sparkly blue turquoise toenails I now have!  I took Rocco down to the beach when I got home and he had a wonderful romp and swim.

We disturbed a Great Blue Heron and some turkey buzzards feeding on some dead fish...which, sigh, Rocco found, and started to roll in to douse himself with their "delicious" scent.  No wonder Bella thinks he is a revolting canine!  Unfortunately for him, he got doused with the garden hose and then taken into the shower and shampooed and rinsed off.

Last night on my drive to yoga in Amherstburg, where I always see the swans on Creekside Road, (remember the photo of the two embracing?), I saw this big guy

He pulled in his head and started to turn around so I quick went behind him so he'd keep going to that bluer creek on the other side of the road.  I'm pretty sure he's a map turtle, from zooming in on his algae(?) covered shell. There was a recent wonderful story about saving one who got run over by a car and had his shell cracked.  Love this guy's fat prehistoric front flippers, and he sure has a long tail!

Now to actually get down to sewing today!

Posted by Sandra Walker at 3:05 PM