As always.  Brady and Brianne are winging their way back home as I type.  It was a wonderful 8 days, as every visit is.  Magical.  Yes, I'm his nana, but this child is something else.  Everyone who meets him comments on his poise, his character, his intelligence, his engagement in the moment at hand.  He told his mum he wanted Nana to give him sewing lessons.  This was what we created one of the mornings.

A Quilt for Caramel, his stuffed (but breathing!) sleeping puppy
I had a little bit of Olaf fabric scraps still left, so I said we could cut out some squares.  He wanted to put red with it.  (but of course)

He went right to work.
I gave him my Ziploc bag of smaller red scraps and showed him the plastic drawer of larger (quarter yard-ish) red pieces.  It didn't take long. He picked that rich red you see under the Olaf fabric.  Then he picked two more reds out of the smaller scraps Ziploc. 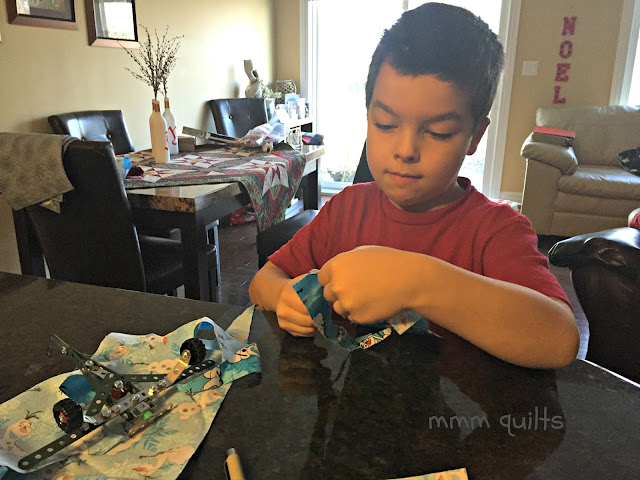 I pressed them, and at that point we came upstairs, away from Bella.  He is very allergic to cats.  I drew the lines with a Micron pen and he cut them out.  Boy, did he do a great job for only 7!
I showed him the checkerboard pattern with the Olaf squares, all of which he'd cut. I cut the red ones.  He made the pattern: two reds in each column.  I'd showed him to spread them out, and had the first two reds randomly placed, but he rearranged them to be in columns!  "This is how I want it, Nana."  We stitched them together, me "steering", he on the gas.  This is my old Elna I brought upstairs for him.  She still sews like a dream, although she doesn't want to zigzag anymore, despite 3 weeks at the "spa".

We did the pillowcase turn method.  For the backing I sewed together some scraps from the pajama bottoms he's wearing that I made him along with some scraps of the Cat in the Hat fabric from his I Spy quilt.  Scraps of Warm 'n Natural was the batting.  I "steered" while he pushed the gas to sew the three layers together, leaving an opening for turning...

We poked out the corners, I stitched the opening closed, but not before I picked it apart so that I could sew on a label!!  Then we started on the quilting.  I started steering while he did the gas, 1/4" from the seams, and then he wanted to steer.  And he took to sewing like a pro.
I was so impressed with how well he managed to keep the 1/4" seam!  I tried to teach both of my daughters to sew...with limited success... Dayna actually did fairly well, but Brianne, Brady's mummy, did not enjoy it.  I took a video of him, too, for the DVD I always make of his trips.  Such coordination he has:  operating the foot control, guiding, whether it's following the seam line with the edge of the walking foot, or trying to remain centred, doing the wavy lines.

Along with playing football in the NFL.

Once that was done, he got back to being a boy-boy, lol:
It washed up so lovely!  I just love the red with the Olaf fabric!  I would not have thought to put the two together, much as I love aqua and red... 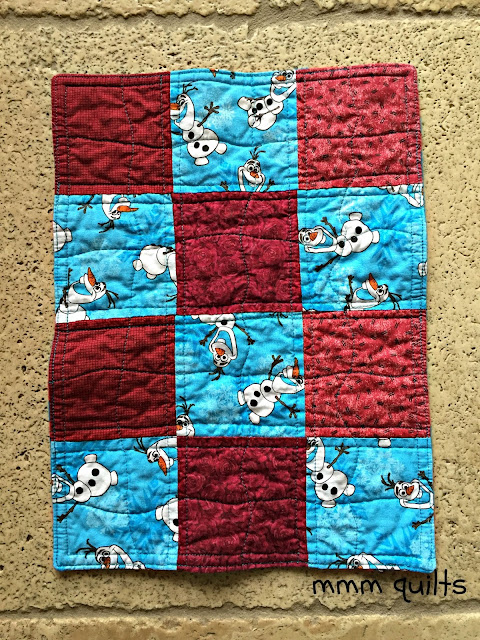 So simple, but so effective.  Hours that I will treasure forever.  Linking up with Oh Scrap! at Quilting Is More Fun Than Housework.

Posted by Sandra Walker at 6:59 PM