Om. The Sound of the Universe

It is interesting how the Universe lines things up in one's life.  I have experienced this more and more over the past five years, perhaps because I have slowed down, and have become more attuned to it.  The first couple of weeks of March have shown me the beauty of the colour orange, a colour I previously was rather 'meh' about.
That very morning on my walk with Rocco...
No clue what those wildflowers are, but... Yellow.  Orange.  Fuchsia.  Red-orange. On a bed of green.  Sumptuous.

The next day, March 12, I started my second mini swap, one I hadn't even known I was in until I received this surprise package on March 5.
She made me a mini!!!  Look how the top three bars of colour match the card.  Notice the oranges.  Can you smell that Mysore Sandalwood soap from India?  I was transported on first sniff.

Me?  I love blues, and lately all the hues of aqua. The night that I received Preeti's mini and goodies (she knows that I have become quite the fan of Essential threads from Connecting Threads) we went to the Show 'n Shine in Englewood, something I'd mentioned when I wrote the review post for Craftsy's Three-Quarter Patch tote.  Said tote is a wild and exotic mix of orange and fuchsia fabrics. Kaffe Fassett.  I made that tote March 3 and 4.  Are you picking up what I'm laying down here?

Back to March 5 evening:

So back to March 12, when I started this mini:
That little baby finishes at 2".  Stars are my favourite block, so I thought I would make a star quilt for Preeti, using leftovers from the Three-Quarter Tote.  I know she loves Kaffe Fassett fabrics and I know now, but I didn't know then, that she loves the colour orange.  To quote her, "It is the colour of sunshine and happiness, bright flowers, sweet drinks and juicy fruits. It is festive and auspicious."

When I finished this first test block, I knew I had to make a second, better one, as it was not quite square.
Besides, do you see the "S" in the bottom block?  The hint of a green mandala in the top block?  Clearly one is mine, the other Preeti's.

Decided to improv this, not knowing where exactly I was headed.  Improv is not my strong point, and out of my comfort zone, but I knew Preeti would apprieciate it as she often works this way with spectacular results.  See her Sun City quilt.  The mini she made me is leftovers from that mini!

I was liking it.  I still had no idea really where it was headed.  You won't either as I forgot to take a picture of the finished flimsy.  It was at this point that I started to think of maybe offsetting the star.  I did Round 4 and added a solid round 5.

And...
went for a walk with Rocco.  I often get into quite the meditative state on our walks; it's very Zen.  The idea to make it round planted itself in my mind.  The idea to quilt the Sanskrit 'om' symbol had also evolved just prior to this.  'Om' is the sound the universe makes.  Everything vibrates with energy; we know that. That energy has this sound.  Making the entire quilt round was right.  Got home, layered the mini.  Looked for the 'om' Sanskrit symbol photo that I saved from when I did my yoga mat bag: 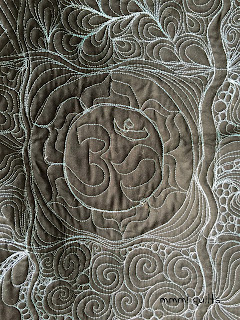 Found it in my Photos, clicked it, I thought, but no, I'd inadvertently deleted it! NO!!! Google Images to the rescue. Found this, which I liked even better than the one for my mat bag, and because we didn't bring down our printer this year, I put a piece of plain newsprint gently against the computer screen, and traced it lightly.  Not big enough.

I'm no artist.  HOWEVER, I can do a reasonable drawing of an image if I have something I can copy.  So I did, and then began the process of using my glass patio door as a lightbox to trace it, in reverse, onto the backing fabric.  It took 3 tries to get it right.  Layered the sandwich once again, basted and got to stitching from the backing, which, of course, is orange.  "Rock Solid" by Moda, leftover from Aidan's quilt, Radiance.

I used Sulky Holoshimmer metallic threads in fuchsia and orange on the back because I wanted that om symbol to shine!  Sulky rayons in matching pink and orange were in the bobbin.  This combination stitched out fabulously.
All done.

Turned it over, hoping I had, in fact got it centred how I wanted.  The bloggers in last summer's New Bloggers Hop will recognize the two solids.
Yes!

Big breath... this part was so scary... I used a sandwich plate to trace the circular shape.  Who needs fancy templates?
Like a wood carving evolving from the log, this little mini was breaking out of its square shell.  Binding.  This black with purple polka dots was also left over from the tote.  Did I have enough to do it on the bias as was required?  Yes. 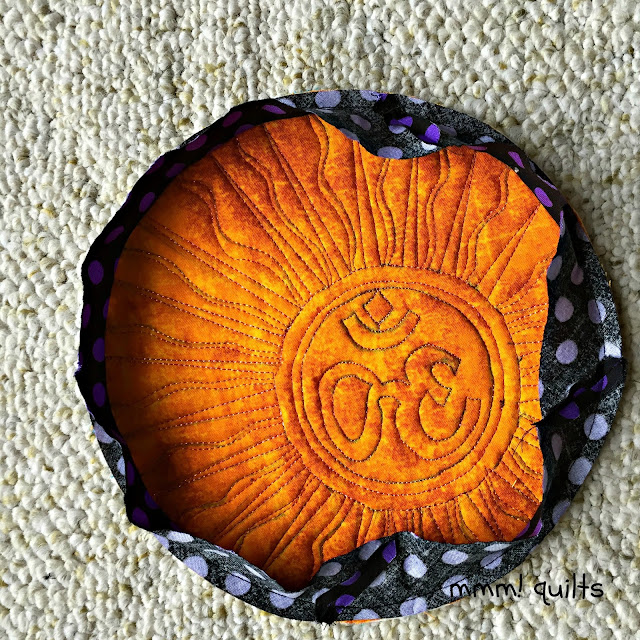 I sewed it to the back of the quilt, maybe a third of the way around, pinned it beforehand, leaving tails.  Then I finished off the binding as I do a regular quilt, with a 45-degree mitre, overlapping the two ends by just a tickle less than the width of the binding, which was 1.25", I believe.  This ensures a snug fit.  Unpinned several inches back so I had lots to work with, sewed the ends, checked to ensure it fit before trimming the ends. It did.
I was really pleased, despite some of the rays' points being cut off by the binding.

Of course, I had to photograph it in the sunshine on the fence (which is not MacGyver's stain job, just so you know; he is MUCH more persnickety). 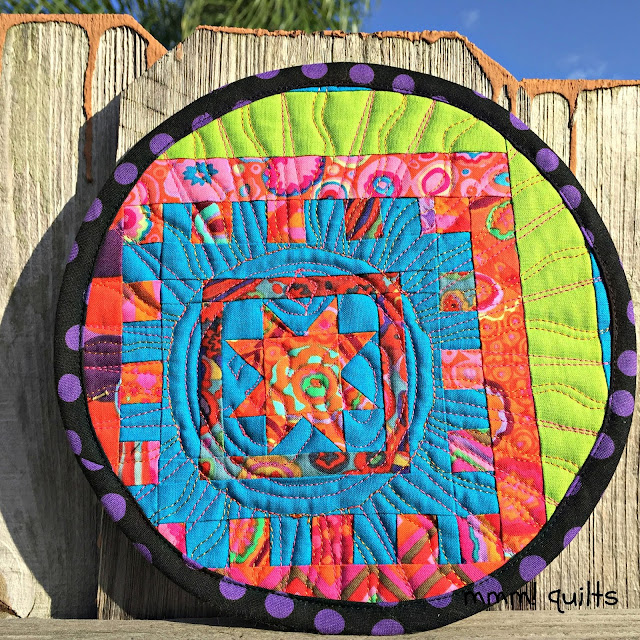 I fought the wind...and I WON!  Eventually.

So now with a mini and a mini-mini under my belt, I can no longer be considered a swap virgin. ;-)

Here is the back of my mini from Preeti.  Clearly, she also knows how much I have always loved interesting and beautiful backings.
As a kid I spent hours with our wooden mosaics, loved making patterns and designs. This reminds me of those mosaics, and of stained glass, and of exotic places, rich colours, pungent scents.  A perfect backing. I had hoped the sun would catch and show off the glints of gold in this beautiful fabric.  It does, but it doesn't do the shimmer justice.

One last shot against azure skies and palm trees for Preeti, who went to college right here in Florida, which is the original reason I wanted orange on the back, as a nod to Florida oranges, the Gators, and all things auspicious, such as our friendship. 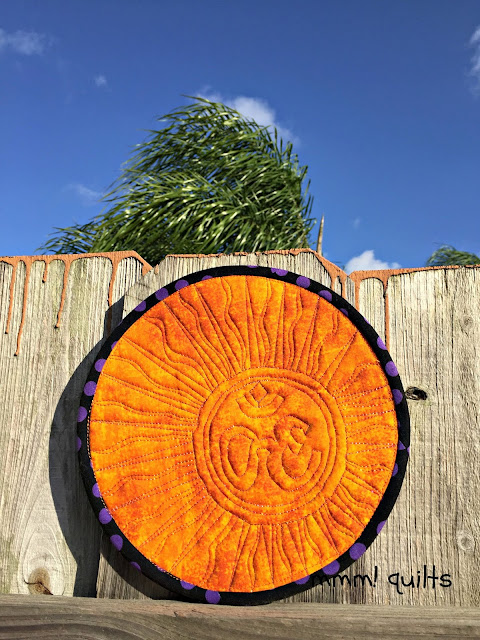 Linking up with Lorna at Sew Fresh Quilts for Let's Bee Social.

Posted by Sandra Walker at 2:43 PM