It's all Cindy's fault.  She writes at Stitchin' At Home; we met in last summer's New Quilt Bloggers Group.  Cindy asked Julie of Pink Doxies fame if she'd like to do a swap over the summer with a few friends.  Julie ran that thought by me, and I said cool, but how would we swap in a group...hmmm, we had a think...and then I asked, what about a round robin idea?  Make it small so it's quick.  Easy and fun.  Went back to Cindy.  Thumbs up.  So I asked Tish, of Tish's Adventures in Wonderland, if she wanted in, and she immediately said, "Cool!"  And thus we had our group of four, already good friends thanks to several hops and activities and emails and iMessages and FaceTime.  Oof-da!!  :-) 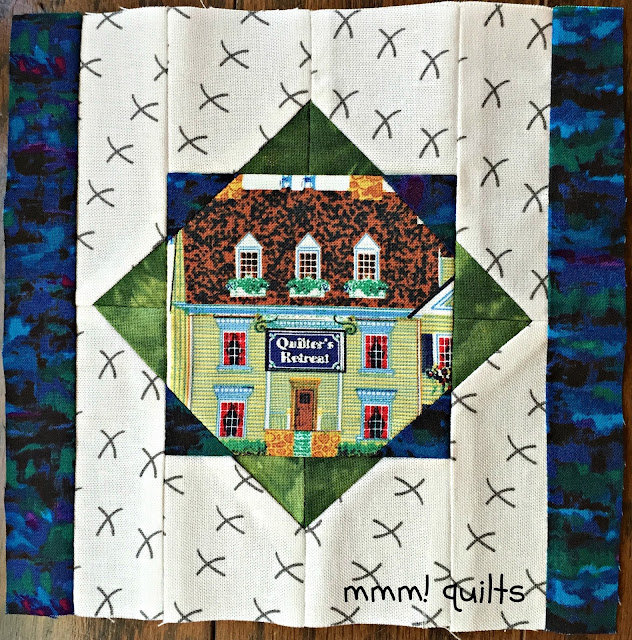 I don't believe anyone in QBL has done a Mini Round Robin!

So what are our guidelines?  We determined that in order for it to be a Mini, it should have a finished perimeter of approximately 24" a side.  With four of us in the group, that meant each round should total about 6" finished.
The centre block would be a maximum of 6" finished, but it could be less than that, and it didn't have to be square.  You could have a 5" finished block, or a rectangle, or a triangle, hexagon.... Each round would total 6" maximum finished, so 3" finished if doing a round on all four sides, or 6" if only adding to two sides, or 7" if the centre was only 5"...and the endless creative possibilities begin!

We have to have our first block in the mail on May 31, shuffle to be determined by good old MacGyver.  The first round has to be done and posted about at the end of June, in the mail June 30, Round 2 by July 31, Round 3 by August 31, and finished quilting and final post Show 'n Tell in early October.

How hard can it be to whip up a 6" block?  I had a couple of ideas, but let them percolate over this past rather eventful month on the quilting and on the personal fronts.  One of the events was my mum requesting a quilt to take to my aunt in England.  Another was Lara's blog hop, (that'll take you to the schedule) for her first book, Crafted Appliqué, (no affiliation) which resumes tomorrow and culminates in some AHH-mazing giveaway prizes June 4!!  And then I decided I couldn't send my Auntie Joyce a quilt without sending one for her husband, my Uncle Frank, who is my mum's brother.  The quilting is finished on it; I had a BLAST quilting...

and might have not torn myself away from it until it was completely done last night, which is why I got a rather late start to actually making my 6" block.  I might have also changed my plan...
It was 12" finished, but how hard could it be to make it 6"?  Cut everything in half, right?
BZZZ!  Nope!  It was soon apparent that we had a problem, Houston.

You do cut the finished measurement of each section in half, and from there add back on the 1/2" for the seam allowances.  After 9 pm, my brain doesn't fire on all cylinders at the best of times, but add in the menopausal brain farts I am plagued with, and the plan goes awry.  I went to bed.  5:30 comes early...

I was stressing about going to yoga this morning when I should be re-doing my block and taking photos and writing the post, and then I thought, 'Sandra!  It's a blog!  You aren't going to be docked pay!' And so I did what yoga teaches: live in the moment.

It's a beautiful thing, doing yoga, making that 45-minute drive back home, which is when the lightbulb first went on, grabbing a coffee at home, and going straight to work... and it WORKED!!

I did a happy dance that it worked: 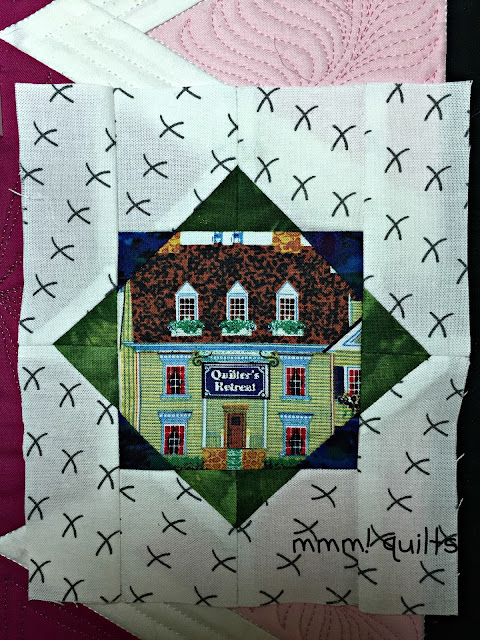 Woo hoo!  Wait...it's not square, and I knew it wouldn't be, because Pat Sloan has you add a 2.5X12.5 strip to one side of her block.  Hers are symmetrical; mine is not.  Direction mattered in the placement of the squares with the green triangles, and in the subsequent placement of the rectangles with green triangles.  Drat.  Well, I could leave it as a rectangle; our guidelines had determined that.  Did I want to do that to the next person after the math crap I'd just gone through?  Uh, no.

It would not do to have the house off to one side by adding a strip as per Pat's plan.  Could I split the strip and sew half to each side?  We determined that using the 'X' background fabric would make it look like there was a mistake.  Tried the green (how I adore this hand-dyed by Julie fabric!!) hmmm, not quite right; what about trying the blue? Yep, we both liked the blue.  And so it is!  6.5" square, ready to be sent off.

MacGyver did his shuffle work this morning, so my block is now going to be mailed to Tish.  You can check out the other blocks here:
Tish's
Julie's
Cindy's

And! Tish made us a not only a button (see sidebar), but also a #miniroundrobin hashtag!  She's SO computer savvy, that girl.  You may recall she has made me some block and layout diagrams for my Blue Skies & Sunny Days pattern which David, her husband, should be finished testing this Memorial Day Monday!  If you're on Instagram, he's posted a few in-construction photos.  Might have a release of the pattern very shortly...

If you would like to join in on our Mini Round Robin, please do!  All you need to do is form your own group of four.  Follow our guidelines, or make up your own.  Post your progress at the end of each month.  I will set up a linky for us to share, and perhaps see about some prizes of some kind, depending on interest.  New groups of four will be one month behind us, but that is okay!

Linking up with Cooking Up Quilts!

And Free Motion By the River