I have the very BEST friends, and I shake my head literally and figuratively when I contemplate how they enrich my life, and make me feel loved.

You all know that Rocco had to have surgery May 10 for a torn ACL.  We have been housebound for much of the time since that surgery, one of us with him 24/7 up until a couple of weeks ago.  Because Rocco has not ever liked his crate, associating it with being left alone, something over which he goes to pieces, crating him to prevent movement for the first 6 weeks was not an option.  We tried.  I stayed right beside him for more than two hours the second time we tried it, moving his crate in the main living area of the house as opposed to the bedroom, doing my yoga practice for one of the two hours, reading/computer stuff after that.  He panted and trembled the entire time until about the 2-hour mark, whereupon, probably because he was so exhausted, he lay down and stopped panting and trembling.  That is no way to heal, we decided.

So my husband, aka MacGyver, being the repair and inventive type guy that he is, figured out a way to contain him using the rug under the coffee table as the 'crate' boundaries.  That did require one of us being with him in the room at all times, which is what precipitated me moving my sewing room to the dining table.  No dates or dinners out; we turned down or postponed suppers out with friends because we couldn't leave him alone.

When I mentioned this to one of our friends, and that going out for dinner consisted of me picking up subs at Subway on the way home from teaching yoga, she decided to give us "dinner out".  She showed up for one of my Friday Yin classes in May, and after class said she had something for me in her car.  Opening up her trunk, she pulled out a large box inside of which was this: 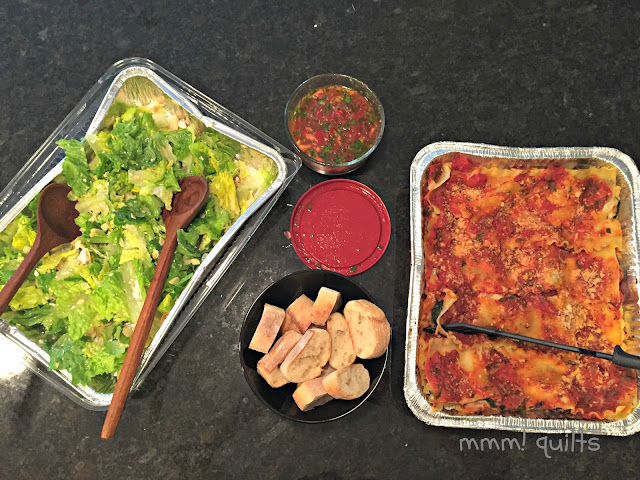 Appetizer: homemade bruschetta with baguette slices; a salad with homemade salad dressing, a bag of feta cheese to sprinkle over it, and the pièce de résistance, homemade vegetarian lasagne, toasty warm.  I was blown away by this thoughtfulness and care.  We enjoyed it all so much.  We didn't get just one meal, we got three!  MacGyver and I both agreed it was the best veggie lasagne we'd ever tasted.  I still have to get the recipe as well as the one for her dressing, yum.  We 'fought' over the last of it, LOL.

That same month I received this letter from my friend Linda.

I just love the explanation Linda writes as to why she took the time to write me this lovely long letter.  Linda and I worked together for 15 years.  We share a lot of common loves and interests.  Being of nearly the exact same age, we have shared many a laugh at ourselves, as well as the angst of going through this 'interesting' stage of life called menopause. She has a wicked sense of humour, as you can see in her 'So what's happening in my "Oh so exciting I can hardly stand it" life?' line.  The fact that she took all the time to hand write the letter to me (something which is harder to do these days when nearly all of our writing takes places on a computer keyboard) meant even more, and the timing was terrific what with feeling like a shut-in at that time.

MacGyver was out in Alberta for 2 1/2 weeks near the beginning of July, (he's back home now) which is why I haven't been as active in QBL of late; all the dog stuff, house inside and out, meanwhile teaching and doing yoga, was in my hands.  No big deal really, but with the worry of Rocco doing something to aggravate his healing leg or damage the good back one (40% of dogs tear the other ACL apparently), has meant not as much free time.  He and Brady had a blast the entire time.

Preeti called me about a month ago, a wonderful surprise, chatting about this and that.  In a care package I received from her in the spring was this Mysore Sandal Soap from India, and I have been alternating it with my bodywash.  I again told her that I cannot get over how the smell gives me such a strong memory and sense of well-being.  Maybe a yoga studio I used to attend burned sandalwood incense?  I was Indian in a past life?  Anyhow, Preeti said she can't get over how much mileage in the form of thanks from me she's got from one bar of soap! 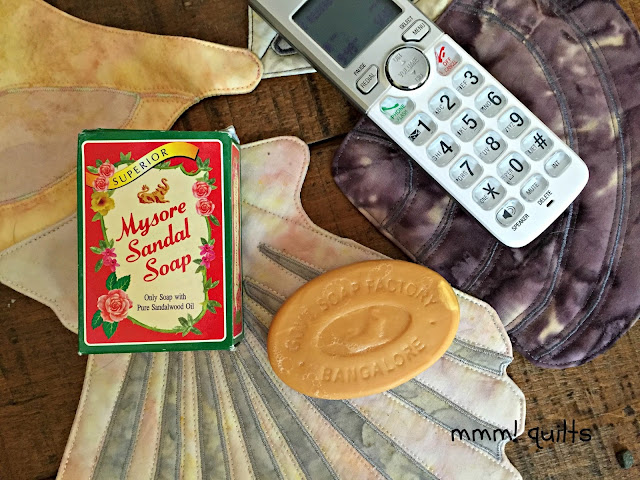 And then a couple of weeks ago I received this care package from Tish, who you know has become a very close friend: 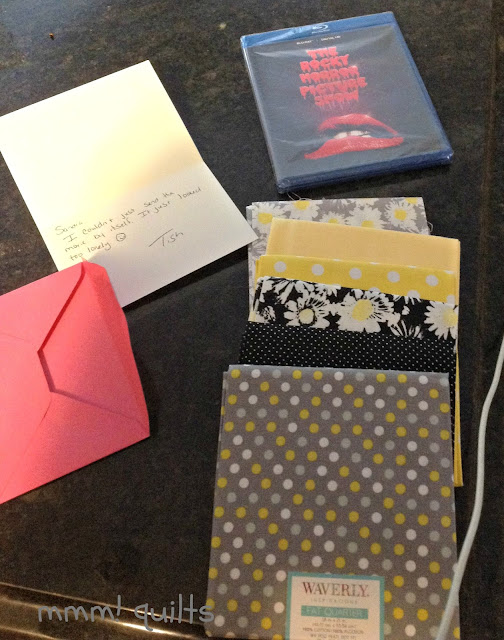 Now I knew she was sending me the DVD of "The Rocky Horror Picture Show" because neither of us have seen it, yet we each want to.  She came across it while shopping and told me she had picked it up to send me.  We had planned to watch it 'together' while MacGyver was out West, but Tish's MacGyver, Dave the Quilt Engineer, decided to be at home on opportune weekend watching evenings, so we have to reschedule.  I like how she staved off the loneliness on the part of the DVD by including a few fat quarters!

Another very close friend, Judy, sent me a care package that arrived the morning MacGyver left.  What impeccable timing, that I should get to drink coffee out of a mug from her!  This is MacGyver's (Yes! She got him one too, knows him very well...her own MacGyver might have this particular trait too...)
I think he smiles (even if it is just inside) each time he has used it for his morning coffee.  Now THAT just does not happen; not only is MacGyver not a people person, he is not a morning person.  Back.  Off.  Don't.  Talk.  I'll let you wonder what appropriate saying is on my mug, wink.

One thing I love about QBL is the support we give to each other.  I decided to support Ruth of Charly and Ben's Crafty Corner by joining her Rainbow Rose Quilt Along.  It has been fun, and the final linkup deadline is this weekend.  I just might have finished mine!  Come back tomorrow and I'll show you.  For now here is a photo of it earlier this week:

I got to thinking about all these wonderful friends (and there are many many more, like Pat, who reads and comments on every post, and told me last week she'd missed me), how they are like the pillow I made Tish earlier this year:  I was disappointed that after having had to wash it, it had crinkled up more than I'd anticipated, and then sending it to her put even more wrinkles in it, but Tish had said not to worry; it was fine.  And yes, like that wrinkled pillow cover, good friends really don't care if the other sees their 'wrinkles'; they see the soul, and that is all that matters.

Next on the agenda is an ongoing project with some more friends!  The Mini Round Robin.  I have oh, 3 days to get Round 2 complete and in the mail to Tish...

Linking up with
Sew Fresh Quilts

Posted by Sandra Walker at 1:11 PM