When our good friend John was last over, her told me how much he loved Myrrh, my Christmas cow.  He wanted to see her in person, and commented on the Santa Claus fabric.  An idea hatched in the back of my mind.  But then, it evolved into not making him a Christmas cow, but a Christmas dog, since he is a dog whisperer extraordinaire, and 'papa' to red-nosed pibble mix, Brandy.

I have wanted to make Sew Fresh Quilts Lorna's Dog Gone Cute dog blocks since they first came out, wanted to join in the QAL, but just could not squish it in.  For John?  You bet I could squish in a final project for 2016!

The stars do align on a regular basis: I won a bundle of "Kringle Krossing" by Shelly Comiskey for Henry Glass Fabrics last week.  I did not bring any Christmas fabric to Florida except for the few pieces to make Myrrh the Christmas cow.  Luckily I had enough of the Santa fat quarter left that John especially liked for Holly's face and then I used Henry Glass prints for her blaze, muzzle and background.  Just love that background fabric especially!  The dark green for her ears is triangle scraps, and small rectangles (one of which is pieced to make the 6.5" required strip) all from John's quilt I made last year for his 75th birthday.  I'm into connections, symbols, double entendres, deeper meanings, in case you haven't noticed.
Despite that foray into fantastic fabrics with a fabulous friend, Julie of Pink Doxies, and despite another blip in production from the QC (quilty cat) department... 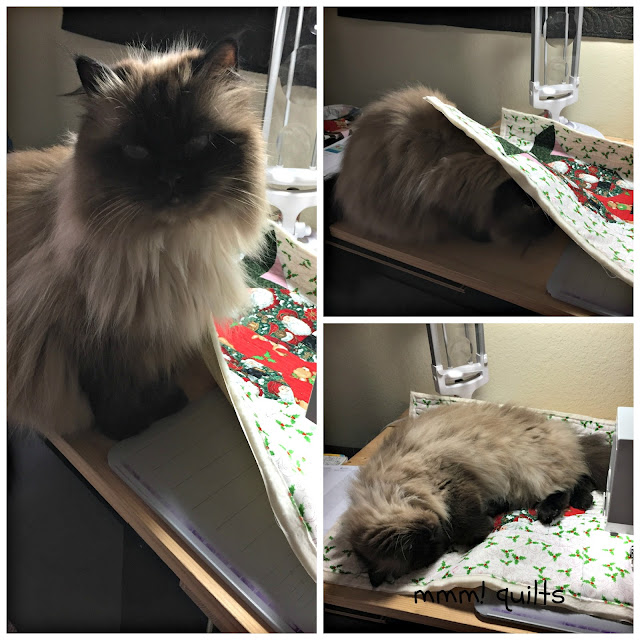 I managed to get the cushion quilted this morning and photographed for today's several Finish Friday parties.
and a fitting photo resting against one of John's two potted Christmas trees, which he gave to us after Christmas 2014 and 2015 to plant. They are thriving.
I kept the quilting simple, doing Lorna's trademark wavy lines with Sulky metallic thread.  I tried to catch the sparkle...
I also tried to give her eyes a little more definition by using the Sulky Blendables I used for her tattoo to quilt a spiral in each eye.  It helps somewhat.  Aren't those reindeers adorable? I made sure to centre one on her muzzle.

The back:
For once I actually remembered to sew in my mmm! quilts label before I sewed on the binding.  I used the reindeer fabric, such a great strip it has in it!
I thought I'd share a couple of tips for sewing with metallic threads that I learned in a Sulky threads class taken many years ago.
Second, you cannot sew as fast as you would with cotton or with polyester.  Think metal on metal and what do you get? Friction.  I only had one thread break, early on, and it was because it did a coil and double-hooked itself around my take-up thingamajig.  So I rigged up my system (some of MacGyver is rubbing off on me, clearly) that I always use for Holoshimmer threads, which are flat threads and need to feed off the spool like a roll of toilet paper, from the top.
John saw the flimsy on Wednesday when he was here for a dog walk and lunch visit; I couldn't wait to show him.  Now I cannot wait to give Holly to him, and I kind of have a feeling there might be an Ivy 😉 coming to my own house soon! 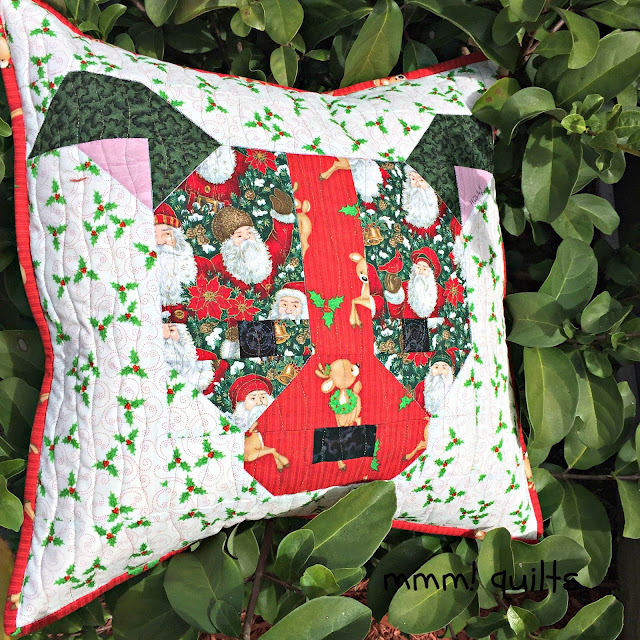 In case you haven't stocked up enough on fabric deals, remember the Craftsy one still on until midnight Dec. 31! That is an affiliate link!

Many quilt shops both bricks and mortar type as well as online type are having end of year sales.  It's a great time to pick up backings or treat yourself.

Posted by Sandra Walker at 1:27 PM