You may have heard that acronym, or seen it.  What does it stand for? Well in my case, not, as you would think, the usual:  What Would Jesus Do? to indicate doing the right thing, the loving, compassionate thing....
Oh but wait! There's love.  There's compassion.  There's the right thing.

What Would Julie Do?!

Let me start at the beginning.

Kaleidoscope Quilts began this journey many years ago. 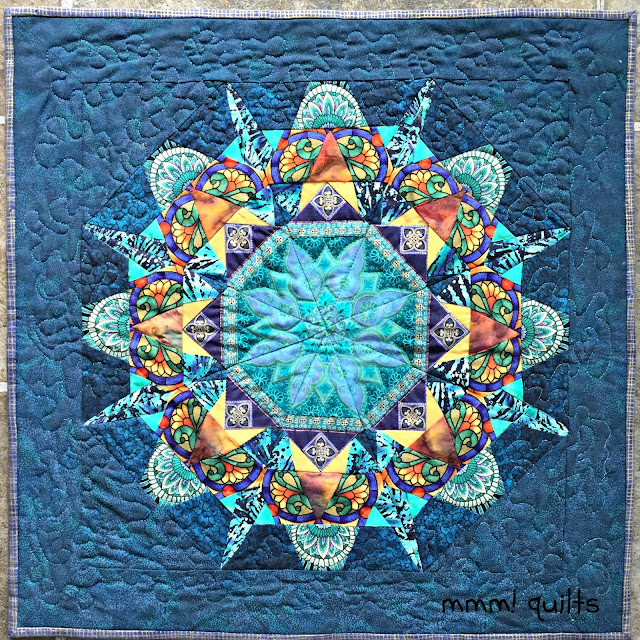 In 2000 I took a class at Earthly Goods in Edmonton from Deb Tilley, a 'protegée' of Paula Nadelstern's.  That was where I first learned about Featherweights.  Paula sews on one, and in her book is a photo of her sewing on this tiny machine on her tiny kitchen table in her tiny NYC apartment.  Over the years I heard how wonderful they are for stitch quality and perfect 1/4" and light to transport to classes.  I didn't actively pursue one though; I loved my 1979 Elna Air Electronic (still do), and I then I loved my 2003 Bernina 180 Artista even more.

1. I inherited my grandma's Singer 27 treadle machine in 2012.  This woke up the slumbering vintage Singer aficionado in me. Once I have her up and running, something I am ashamed to admit I still have not done, I will write her story. 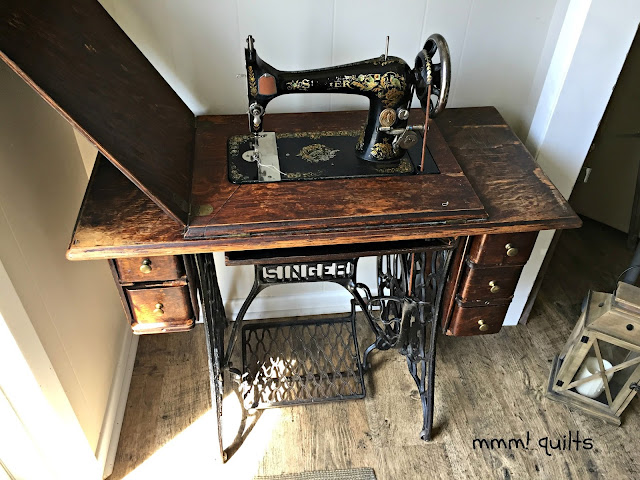 2.  I got together last summer with my good friends Liz and Danielle for a sewing day, and what does Danielle bring down from her sewing room to sew on?  A sweet little Featherweight.  Hmmm.

3.  Towards the end of April Julie got a Singer 15-91 (read about it here) and thus she it was who fully woke the beast.  So I decided to go on kijiji which is just like craigslist in the US, just to see if there were any vintage Singers in the Windsor/Essex County area...

Uh yeah.  There were several!  There was a 15-91 much like Julie's!  For a mere $50!  There was a 99K that was a great price too. There was also a Featherweight which Danielle advised to go for, since it was a terrific price, despite being advertised as having no cord/foot pedal, no case, and no attachments.  However, I couldn't get a response from the person selling it. So one evening after yoga, MacGyver, who has become rather smitten with these darlings, and I popped off to check the first two girls out.

So, we set off to see the 15-91, which was the original one I'd thought to get, since it sews leather, and MacGyver has a few projects in mind for me to sew with some deer hides he's been saving.  The 15-91 is also well-known for its FMQ capabilities, ability to drop the feed dogs, and large harp space, (the area between the needle and the post part where the motor is), so this was the machine I thought would be great to have as well as a Featherweight. However, the person selling it wouldn't be home until later in the evening.

Therefore, the first stop was to see the 99K which had been sitting in a storage unit for at least 5 years (probably more is my guess) and hadn't been used for much longer than that.  She interested me because she was smaller, and I thought she might be the machine to get instead of a Featherweight.  I'd read some very good things about this model too.  Well, we plugged her in and away she went with one small turn of the wheel by hand to help her.  She whirred like a little worker bee. 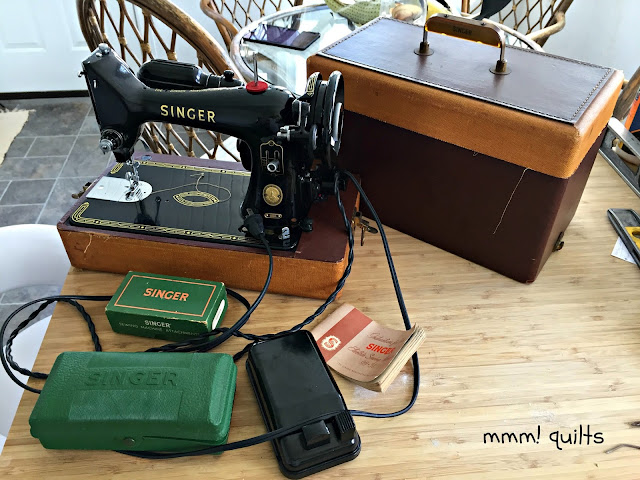 All the while I'm thinking, I want a Featherweight, really.  But this one is pretty small! And she purrs!  And she's so shiny, like just about perfect condition after sitting all these years?  What would Julie do?  She'd give her a good home.  Done.  Sold.  (for $20 less than asking) 😉👏

Time to go see the 15-91.  Or should I just stick with this 99K, which had already floated her name into my head, Fiona, being made in Kilbowie, Clydebank, Scotland.  MacGyver said let's just take a look at the 15-91; can't hurt.  So we sat at Tim Horton's (of course!) waiting for the arranged later time to meet up to see it, talking about how ecstatic I was to have scored this 99K, and excitedly discussing these vintage machines, along with his real love, vintage cars, and how they are built to last, and a person can bring them back to life with a little elbow grease, much like Julie talks about "spit and polish" in her post on her 15-91.

Well, we ended up getting the 15-91 too.  She's a bit rough, and hasn't had her full treatment spa day yet, but I've already spiffed her up a bit, and the former owner has found a couple of her feet and another instructions book.  She's named Dorothy.  You'll have to wait until I write up her post to find out why. 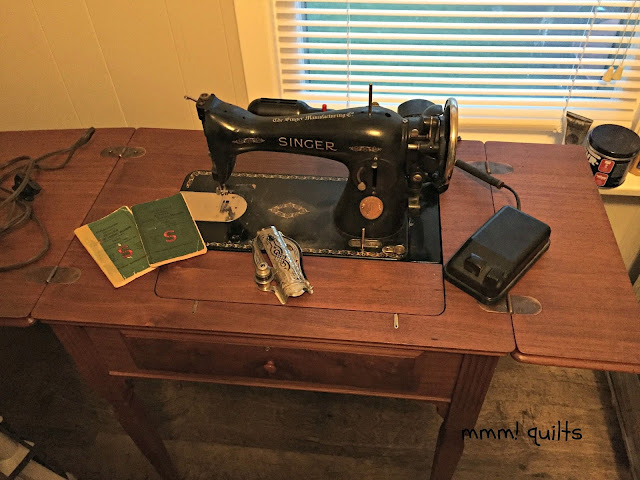 Yet still no Featherweight.  Emailed the guy again.  Finally heard back from him and he said someone else was coming to look at it, and he'd let me know if they didn't take it.  And then I decided to look a bit further afield, up around London and Chatham/Kent County.  Well, one ad caught my eye.  The machine looked pretty spiffy.  They had two, both 221K, which are made in Scotland.  The price was what Danielle had said they go for.  This couple lives in Tillsonburg.  The home of Stompin' Tom Connors!  I hadn't been there since we lived in Essex County in the 80s.  It's only about 2 hours northeast of me.  I emailed.  We arranged to meet on April 30.  MacGyver decided to come too because he had finished assembling all the IKEA stuff he could at that point, and he loves a drive.  Wait. We could do one other thing on this road trip Saturday, check out if Cindy of Stitchin at Home, would not be at home, and could meet us somewhere!  You know the outcome of that from a former post.  Great visit.  Preceded by a great purchase. 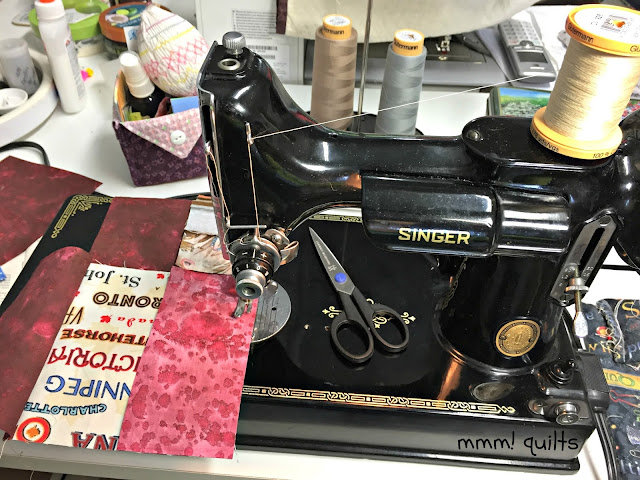 Yes, I bought a Featherweight!  She is a 1951 221K.  Another Scottish lady! I've been sewing on her pretty much ever since I got her and gave her her full treatment spa day, and she sews beautifully.

So the next day, Sunday, April 30, I was able to take another very short drive of a half hour, to Belle River, where I had my first Ontario teaching job when we lived here in the late 80s, to see the really low-priced, probably a garage rat of a machine, Featherweight.  Why would I get a second Featherweight?  One word: price.  I could maybe fix her up and sell her and make a bit of a profit.  Besides, What Would Julie Do?  You got it.  Save her.  Love her.  And I did.  And I do! 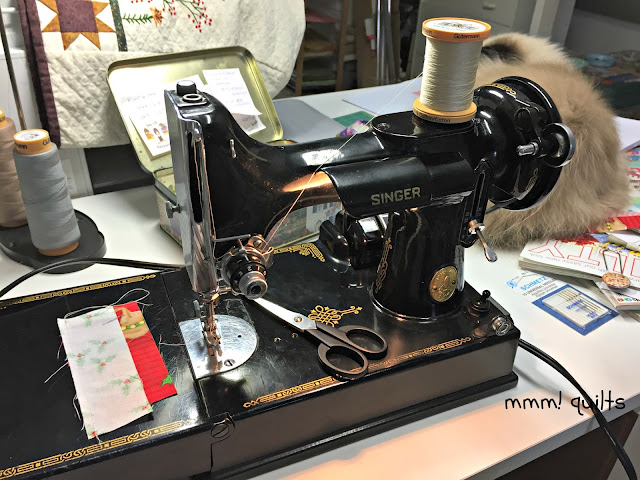 She is my only American vintage machine of the group.  She's a 1947 model 221.  She's the same age as our new house.  Like how could I not?  She has seemed to name herself Elizabeth, after her Elizabeth, New Jersey, birthplace, but Marilyn also pops into mind...think of the icon Marilyn Monroe, and you might know why.  I've sewn a bit on her after she got a MAJOR full-treatment spa day.  I am SEW in love with her, and amazed by her fortitude after living who knows how long in a dusty garage and, clearly long-neglected before that.  Oh, and she has quite the story to tell as well.

So this has been a rather wordy post, and thank you if you have read it all and now know the story of WWJD?!  As for Julie's escapades adventures from north to south of the continental US over these vintage machines, hop over to her blog to see what love and compassion she, too, is showing by doing the right thing!

As for my five vintage Singer ladies, I will be devoting a full post to each one of them, because they are that deserving, and I am honoured to have become their caretaker.  So stay tuned.  I see another tab up top: Vintage Singer Sewing Machines.  I've done a ton of research over the past few weeks, and have come up with some terrific sites with valuable information for those of you who may be considering the purchase of one.  I'll include these on the Singer page.  This may help to explain why I haven't been sewing as much as usual!  It's not just the move/organizing/running around/planning/setting up/dismantling/hunting for/different routines/I want my quiet set-routine life back issues!  It's also all my Singer adventures that have contributed to less time in front of my sewing machine.  I'm pretty 'dead chuffed' as my mum would say, about it all!