Remember Blue Skies? My first 'for sale' pattern?  Well she has another 'first' under her belt... 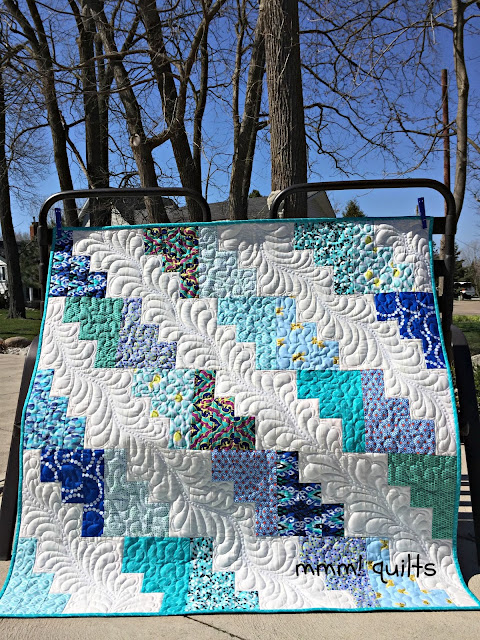 She's been sold! My first sale in my Etsy shop. I could say, "Wow! 50% of my stock has just been sold in my Etsy shop!" Which is entirely true.  See how one can manipulate stats? Yeah, I have only had two items in it for the past year, grin, and ahem...I need to amend that, I know.  Or should I say, I need to augment that?!  It'll happen.  Just like my sewing room, just like our kitchen (eep! It's so exciting, picked out the granite today! The only part that someone other than my MacGyver has to do.)

There is a most wonderful story with the sale of this little quilt, so sit back and let me tell it to you.  It began with an email.  The people were enquiring about the quilt, and wanted to know if I could embroider a design on it.  They were planning on giving it as a baby quilt, destined for a baby boy. I said yes, and sent them a sample of some of my FMQ embroidery work.  They sent me this graphic, and over the next several days we talked and I stitched:

I am no artist, meaning I can't draw images out of my head.  However, I am a fairly decent copyist! For this, I also made a sort of stencil out of paper for getting some of the lines and proportions correct. You can see I used a blue line marker to sketch the lines. I quadruple FMQ-ed with a straight stitch the outlines, giving it the look of hand embroidery. Here is the finished graphic: 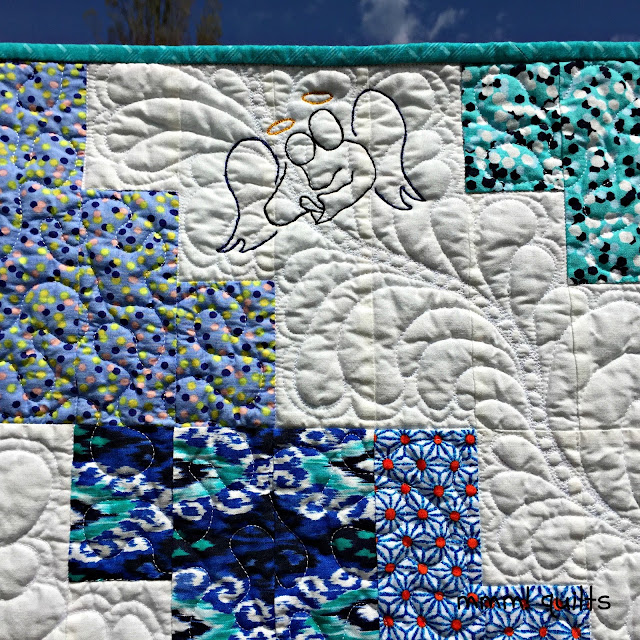 Why the angels embroidery? Well, the mother of the baby boy that this quilt is going to lost both her own parents when they were very young, so the purchasers wanted the guardian angels as a symbol of her parents watching over their grandson.  That tugged at my heart!  I wasn't sure about embroidering onto a quilt that was already quilted, but I did some test samples, and got their approval. Once I saw the finished embroidery, it struck me that the angels appear to be in clouds, formed by the poofiness of the feathers. 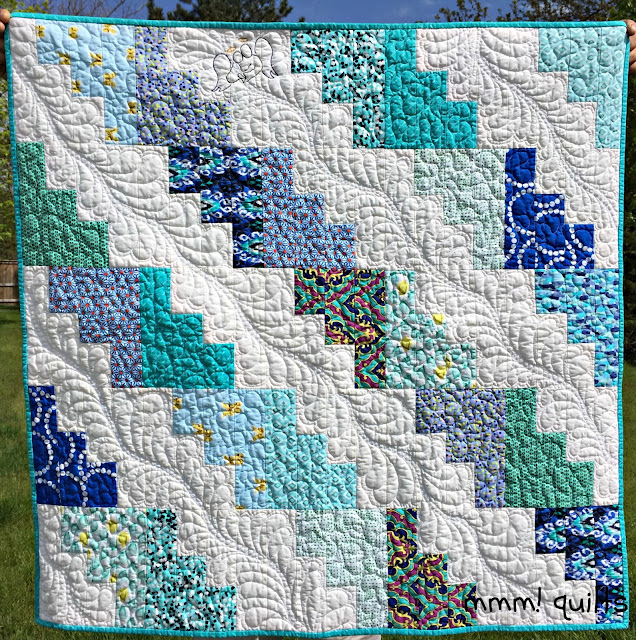 Amazingly, the lovely people who bought the quilt live in Ontario, my province! They were an absolute pleasure to work with.

This quilt has an international connection, that is, between Canada and the United States: it will be travelling with the clients next month to California, home of the mother and baby boy to whom it will be given. I just love thinking of the wee baby who will be wrapped in his blue skies quilt, wrapped in love from his family, both here and in heaven.


In other blue news, "Cuh' Boss!" is on the frame!! It just so happened that with securing the 3 layers together and then stitching in the ditch, I ended up in the top right corner where the blue cow is! She was the very first cow I pieced; how fitting that she is the first to be quilted.  Did I mention how much I love the colour blue? 💙 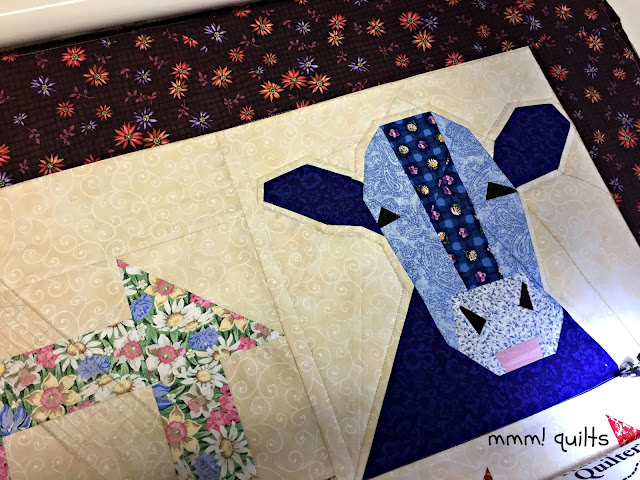 And, in a little Canadian news (see what I've done here?! Love love when a post that seems like a schnozzle comes out a delicious, choreographed scrap quilt), I got almost 'only 3 blocks behind' in the 150 Canadian Women QAL (which is featured in Quilter's Connection magazine!) but that was yesterday, a Tuesday, the day of the week when Kat releases three more blocks, so I was 6 blocks behind, now 5 as I made one this morning!
85 - Elizabeth Smellie: awarded the Royal Red Cross for her exceptional service in military nursing during WWI, in 1923 was appointed superintendent of the Canadian Victorian Order of Nurses (VON); she also worked for the World Health Organization (WHO); served in WWII as matron-in-chief of the Royal Canadian Army Medical Corps, and was promoted to colonel.

86 - Ethel Stark: She has so many firsts: brilliant violinist, superb pianist, she was the first Canadian to win a fellowship at the Philadelphia Curtis Institute, only woman to sign up for conducting classes; first Canadian woman soloist on a programme broadcast across the US; founded the New York Women's Chamber Orchestra, founded the Montreal Women's Symphony Orchestra; in 1947 that orchestra was the first Canadian orchestra to play at the New Carnegie Hall; first Canadian woman to gain international recognition as a conductor. I have been saving this red/ivory music fat quarter for important female musicians--sure hope kd lang will be one of the future women.

87 - Kenojuak Ashevak: Inuit artist; her art (an icon) The Enchanted Owl, is on the commemorative $10 bill which was just released June 1! I love how many connections to Canada's birthday Kat has inadvertently (I think) done through her 150 incredible women project. There is a holographic image on that bill, the stained glass in our Parliament Buildings in Ottawa, so cool, and the prominent image of another Canadian in Kat's project, Agnes MacPhail. Anyhow, look closely at my block, the one on the bottom left.  I knew I had some Aboriginal Canadian art fabric, left over from a quilt I made for my niece several years ago.  I was so pleasantly surprised when I saw there was an owl image on it! It's brown, white and a bit of burgundy, but I had to include it, along with birch trees in winter, and snowflake white fabric.
(info paraphrased as always from Kat's PDF files)

Hope you will be back tomorrow for a most momentous occasion!  The final reveal and parade of Freefall quilts from my Freefall Quilt Along. There are some fabulous prizes to be had, and remember flimsies are fine! I've already seen some finishes...WOW!