I am behind in just about everything in my life these days, including an unplanned hiatus from Ashtanga yoga, but I keep plodding along. Here is the green row, May's colour, for my Migrating Geese, project #2, in the RSC 2017 at soscrappy.

Little has been done on any of my RSC projects, of which there are three, but for a few green blocks on the "X Marks the Block" project, which is #3.  This particular project my friend Nancy in Florida spied on Pinterest, as a fun quilt to do together as a long-distance quilt-along.  I did put a yellow corner on one of the green blocks: 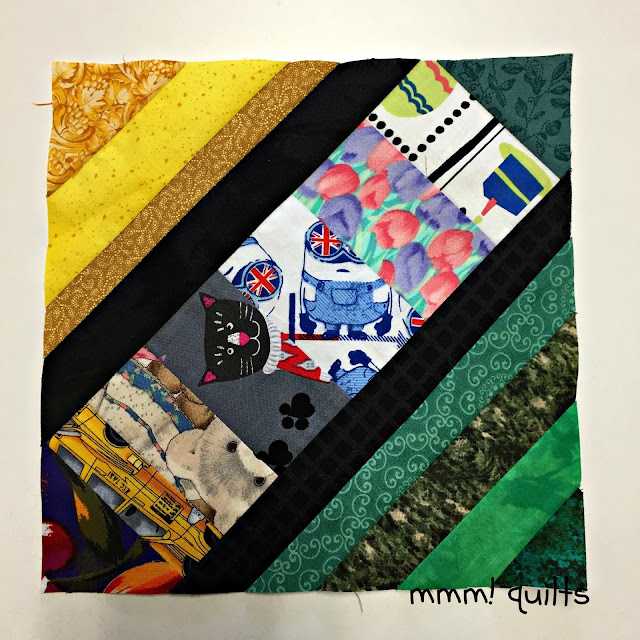 I remarked that I may have got myself into a bit of a Rubic's Cube dilemma with opposing corners in various colours. Might be time to sit down with the sketch book and do a little planning? Ya think?

I pulled out a bunch of my yellow larger scraps to begin cutting for the yellow migrating geese row.
I have realized, in this past 2 months of crazy, that having stuff prepped ahead of time means I will accomplish more by basically doing these projects as leader/ender projects.  This is something I knew and possibly verbalized silently (ha oxymoron there) to myself, but it is so true.  Now, finding the time to actually plan and cut ahead, is key.  However, now that things up here are actually starting to have some semblance of order and organization, that is becoming more of a reality.

Here is my temporary design wall! 😆 A tablecloth from the dollar store (which works wonderfully btw) suspended from the highest point of the ceiling (7') by two nails and a pin.  Can be weighted down with a dowel and rolled up and clipped to those nails! A MacGyver invention, of course.
Ioleen from Instagram suggested I use velcro strips, one on the ceiling, the other on the tablecloth to attach it. Great idea! Here you get a peek at the longarm, the Singer 15-91 desk that is doubling as my computer desk, and one of the kitchen cabinets now being used as fabric storage. I moved the shoe rack under one of the eaves sections. You can just see it to the right of the tablecloth.

I did buy two sheets of 2X8' half inch styrofoam but they are too tall for the ceiling up here! For now one is on its side under the back of the longarm, and the other is in our bedroom. I plan to get another two so I have an 8x8' design wall as I used to have, covered with my beloved gridded flannel.  It's going to have to be folded/hinged somehow and I know there are tutorials to do this online, plus I have my beloved husband to mastermind something that I often tweak a bit to serve my needs. We're a pretty good team.😉 I'm okay with a design wall in our bedroom; I can contemplate stuff while ... okay never mind, where my thoughts went is not what I'd originally intended to write! LOL Yesterday while iMessaging a dear friend in Alberta and telling her a bit about the kitchen reno, in which convo I said, "I have a great contractor; I sleep with him too!" and she responded, "Sassy Sandra!" well, there you go, guess I am. Grin. (I can hear both my daughters going, "Disgusting.") Ha! I was originally envisioning having a design wall in my bedroom and waking up with the sun, being unable to resist playing around with fabric, much to MacGyver's annoyance since he is so not a morning person. 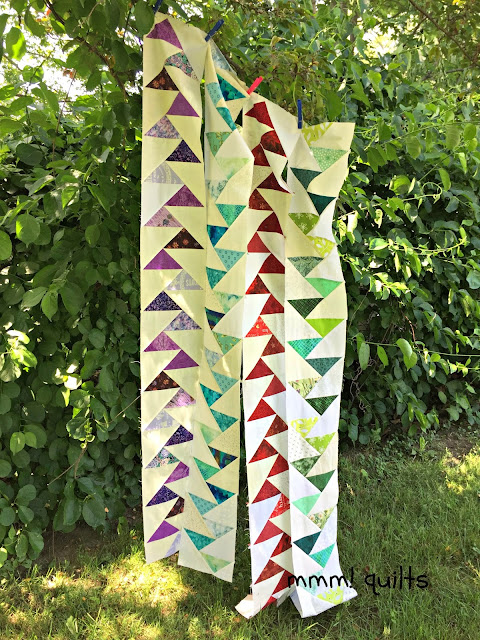 Back to the migrating geese! Here they are suspended from the crabapple tree, against what will reveal itself to be either wisteria or trumpet vine once that all flowers.  Apparently both are there, climbing on, and most effectively disguising, the chain link fence. Love the way this quilt is progressing, and can't wait to get that yellow row up next.

Linking up
soscrappy
Quilting is More Fun Than Housework
Posted by Sandra Walker at 1:55 PM