This beauty came with the house, and she's pretty big: 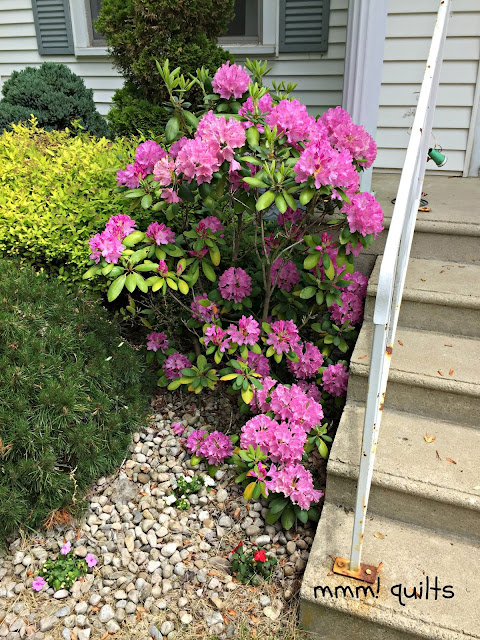 She may need a little tender care, as she's been a bit neglected over the past five years methinks. The front garden on either side of our step is really nicely, obviously professionally, landscaped. MacGyver's shaped and fussed with it a bit, as have I, adding the impatiens on either side of the steps too, as well as one of our beloved rhodos we brought from our previous house.  The rhodos all three flowered at different times...different species maybe? Or is it because our two were in a bit of shock from the move? Regardless, I've loved having them all blooming at various times over the past month.

2. I love the fragrance of many flowers.  Here are more flowers that came with the house.  I correctly identified two of them, had one confirmed by Julie of Pink Doxies, the other by wikipedia.
The first is this Mock Orange that smells heavenly.  I like discovering fabulous plants in this yard and thinking about the lady, Mrs. Murray, who planted them many years ago. 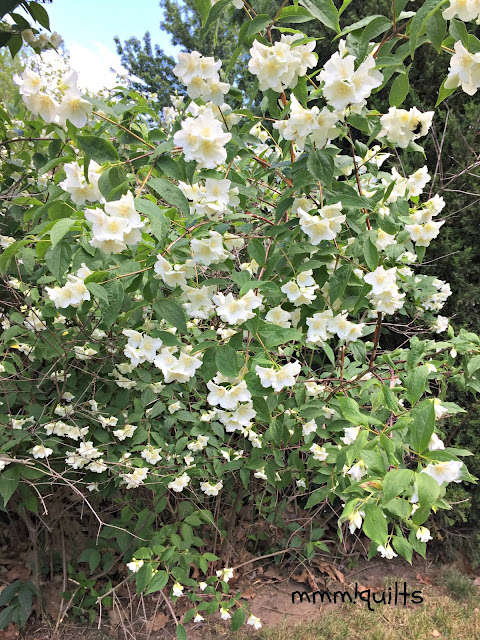 3.  Here is another she clearly planted amongst the lilacs.  Pink Cloud Beauty Bush, aka Kolkwitzia amabilis has recently shown herself beneath the towering (and long-finished) lilacs. It's a lovely 'Pink Things' squares icing colour. (I should find that old recipe for those squares--yum! We never did get or remember a name, and so 'Pink Things' they became.) 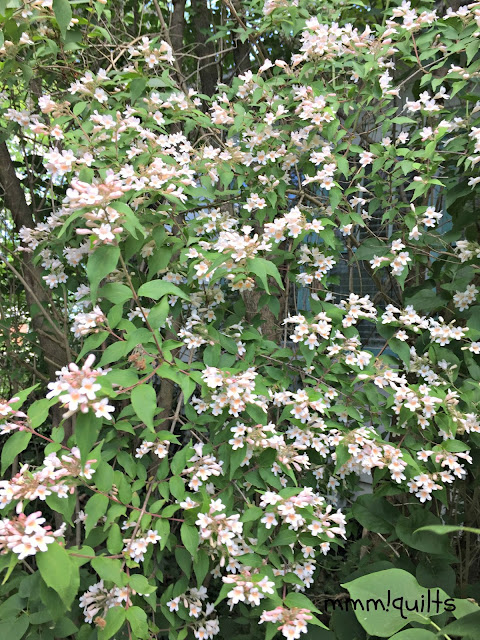 We have plans to move each of these once we develop our yard and gardens.

4. I like having a husband who is a MacGyver, a builder, a gardener, a designer; there is nothing he can't do.  He's finished stage 1 of the deck remodel, and I love it so far. 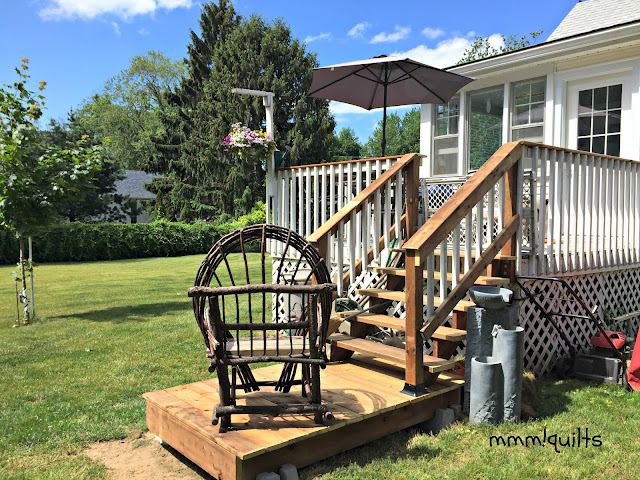 The post from Mrs. Murray's clothesline serves as a basket of flowers holder for a few more days until he gets some brackets to hang it off the house. He doesn't like it, says it's tacky, but I'm okay with it as a plant/hummingbird/oriole feeder... I like having a private sunny deck where I can enjoy morning coffee and lunch and afternoon tea.

5. I like that both hummingbirds and orioles have been coming to that feeder.
6. I like text messages I get from Brianne about funny conversations with Brady. I needed this one this afternoon: 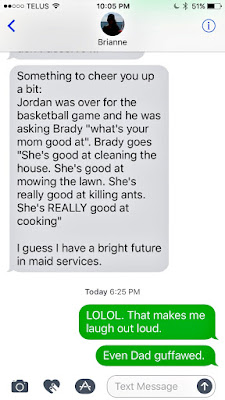 7. I like, no I love, the deep friendships I have formed through writing this blog, and where it has taken me as a quilter and as a person. You've heard that time and again from me, and time and again from other bloggers, and, if you are a blogger yourself, you've experienced it. It brings our world together, something we desperately need in these crazy times.  This year I've made a very very good friend in a blogger who isn't even a quilter! Not a member of QBL!! Gasp!  Helen of Word Weaver Art is a talented artist, retired for a little over a week teacher, and a kindred spirit, who I plan to meet one day.  She loves my cows blocks and the quilt; if you scan through her blog you will find some wonderful paintings she's done of cows...

8. I like quilting with friends around the globe! Making connections.  My Freefall QAL is quickly coming to a close. I have quilters from Canada, to the USA, to Ireland, to New Zealand quilting along!
And...as things do happen, there's a group of us planning to do another quilt-along, not my pattern this time, but Postcard from Sweden, (affiliate link) free off Craftsy.  Something Helen of Midget Gem Quilts said on her blog about it, I commented, and now off we go.  We are thinking of starting this in August, so you've got plenty of time to get some fabric together. More details forthcoming.

9. I am still liking (an awful lot) the 150 Canadian Women QAL project.  I am still behind.  However here are the latest ones since I last showed you. Good heavens! I went back...and back...and back! I haven't shown you any on the blog since the last 'I Like/Love' post on May 18! Which were #74-75.

Here is the latest group, Blocks 82-84:
This lady tugged at my very core: 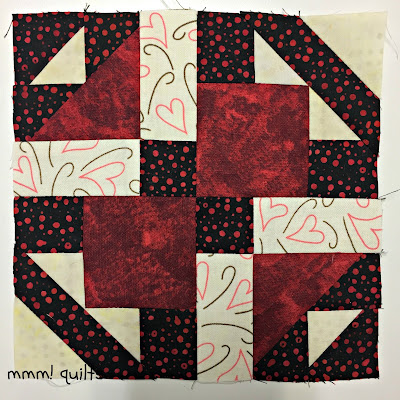 What an unusual block for me to construct, asymmetrical in its quadrants. Claudia was an engineer who loved science, earning her Masters in geophysics and space physics. She studied plate tectonics, moved to NASA's Jet Propulsion Lab, was project manager of the Galileo Mission, received her PhD in the Physics of Space Plasma and was Woman of the Year.  She also worked on comets, and was project manager and scientist of NASA's role in European Space Agency's to study comet 67P/Churyumov/Gerasimenkl when she died.  When she died.  I did a double-take. Wait, I thought I saw she was only a year older than I...yep born in 1959.  So I Googled her. She fought a 10-year battle with breast cancer, succumbing in 2015.  I don't know exactly why it affected me so profoundly but it did; I cried.  So in her block you see the pink hearts, fabric I bought at Alma Sue's Quilt Shop which they used for a Quilt for the Cure project for Breast Cancer Month (May) last year, and the black with red dots batik to symbolize her work in space physics.  Such a great mind.  Such a loss for us.

10. I like strong women. Some fought quietly for change, for recognition; others fought loudly and belligerently.

They all fought bravely.  To be equals and worthy of every bit of their being.

I would like to fight loudly for some causes, (for pibbles to be seen as just dogs, for Ontario to rescind the ban, for stopping all the bombing in the world, for the oceans, for using less plastic! Take your own cup to Tim Horton's, Starbucks, etc! for human beings to be seen as human beings...) But I will fight quietly, knowing that every positive I do, and that we all do, in our own way, makes a difference!

Linking up with LeeAnna at Not Afraid of Color