This is my second entry in the Bloggers' Quilt Festival 2017 held at Amy's Creative Side. My first entry is here.

I named this one for the phrase I can still hear clearly in my head from many many early mornings when I'd sleep out at my grandma's farm, and also at my aunt's, "C' Boss!" calling in the cows to be milked.  The C is pronounced "cuh", short for 'come'. "Boss" is short for Bossy, a common cow's name. 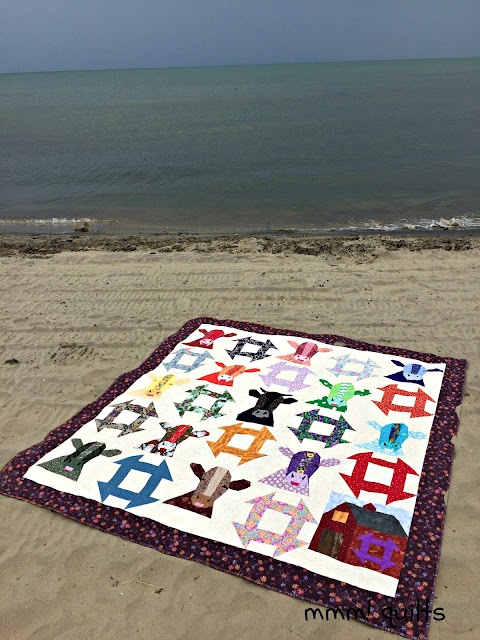 This quilt took a rather long time from germination to actual finish.  Like my other entry for this year, it lives in Alberta. 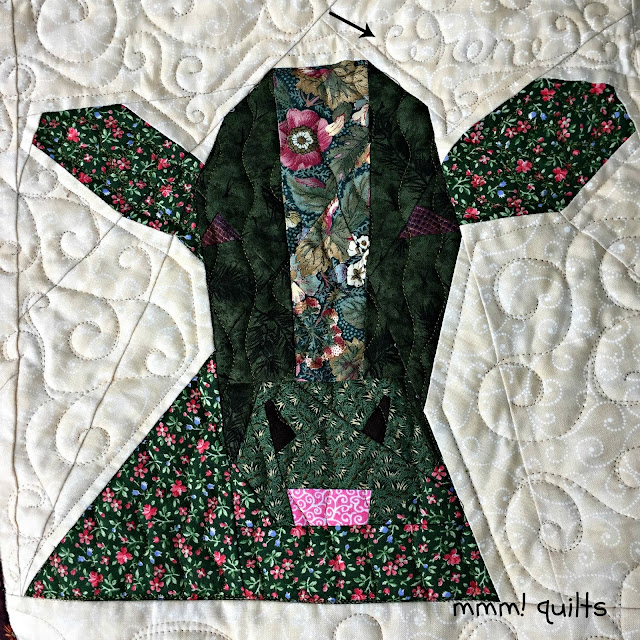 It was my Rainbow Scrap Challenge 2015 project, at soscrappy that I made for my aunt, Irene (spot her name in the background of the green cow) for her 75th birthday.  She got it a year and a half late, ha, but it's all good.

It's mainly made of scraps with a little bit of specially purchased yardage, the ivory background for one, and the border for the other. Here is the flimsy and the link to read about it is here: 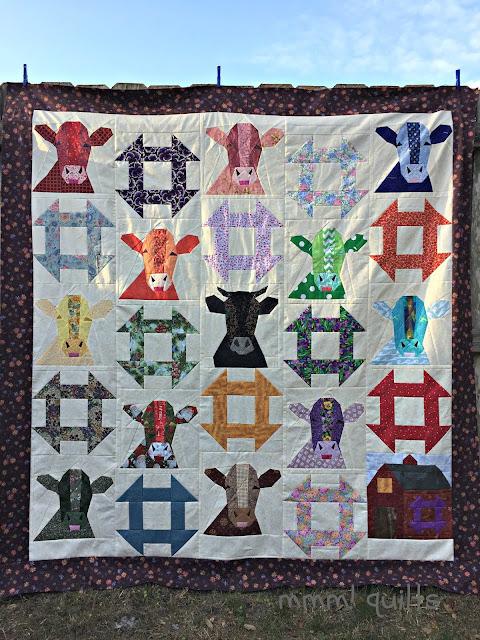 Oh, I also bought the backing at Sew Sisters Quilt Shop specially for it: 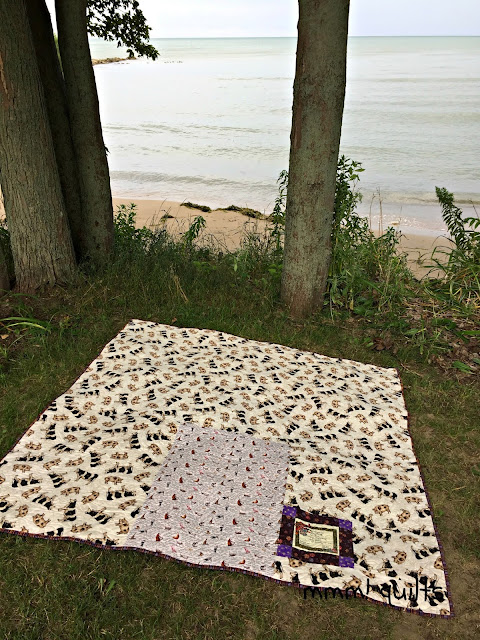 Actually TWO pieces for backing. I'd bought enough to do the entire back in the cows print from Sew Sisters, but then discovered the farm animals doing yoga fabric, and, since I teach yoga, and my farm folks used to raise pigs and chickens too), I just had to get a piece of that fabric to add into the back!

My farm family raised both beef cows and milk cows.  I did Churn Dash blocks, for obvious reasons, as the alternating blocks, and cows come to the barn, don't they, at milking time! "C'Boss!" 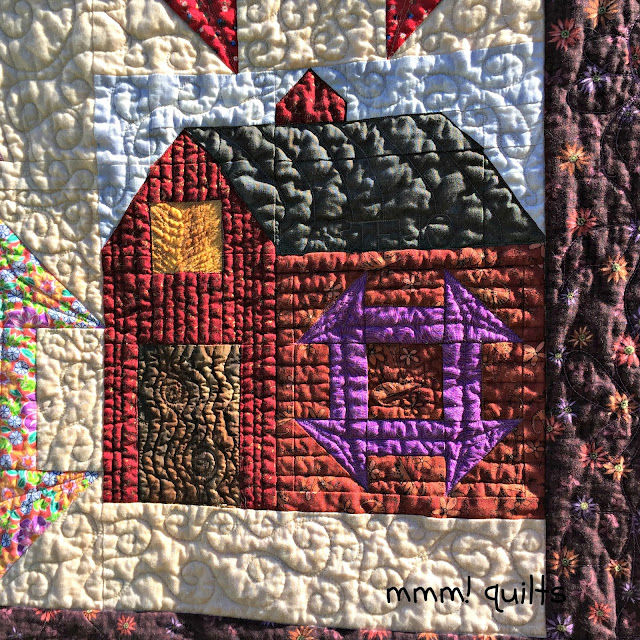 Too much fun!  Purple is Auntie Irene's favourite colour. You can read more about the quilt and see more photos here.

If you want baby cows, aka calves, ya gotta have a little bull: 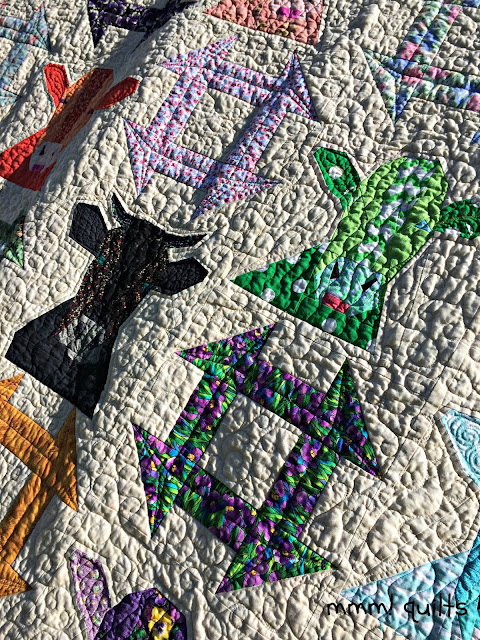 Because my aunt had and and does have some Black Angus cows, I of course had to make one. His name, though, is not Angus, but Jethro. Many of the cows named themselves as I worked at them.

She sleeps under her quilt each night! 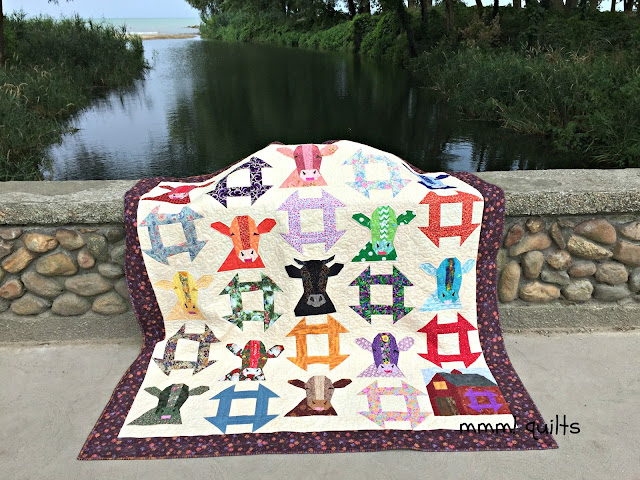 Thank you so much to Amy for hosting the festival again this year. Thanks to my sweet friend Preeti, who told me, yup, told me to enter and which quilts to enter, LOL. I followed her advice on one of the two quilts! 😇 And now, with 20 minutes to spare, I'm publishing this post! 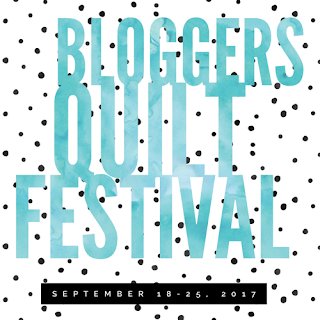 Posted by Sandra Walker at 3:32 PM