I posted my Q2FAL list in my last post, and two days later, I'm admitting I've already had a DrEAMi!

It's a necessary DrEAMi! (the next linkup is May 3) and here's why: 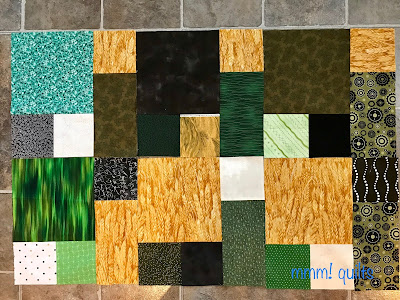 I quite literally dropped everything that was in the queue and made six of these fast and easy blocks for the Humboldt Broncos hockey team. I'll be sending them off to Saskatchewan tomorrow where they will be made into quilts for the many many people affected directly by this horrific tragedy. I'm so glad people now think of first responders when they think of how they can help and who needs it. Our good friend John, Brandy the pibble's dad, is a volunteer firefighter and he says some of the accidents he has had to go to have left him sleepless for many a night. You can see it in his face when he talks (rarely, like twice) about it.

I put the first four blocks on Instagram Friday night, and added two more this afternoon. All six have a Benartex 'Wheat' fabric I've had for some time, supposed to go into a deep teal and golds quilt. When they said gold as one of the colours, and I started going through my yellows/golds, I spied this, and knew in my heart it was perfect. Saskatchewan, for those who may not know, is one of the three prairie provinces of Canada, with Alberta (my home province where I used to live) and Manitoba, the other two. Alberta and Saskatchewan's vast flat southern parts, as well as more than half way across Manitoba's southern lands, is perfect for growing wheat. I tried for a more masculine flavour to the fabrics as well.

When I came across this gold in amongst my plastic baggie of small yellow and gold scraps, another poignant, but oh-so-perfect moment happened: I'd include this piece of Laurel Burch's Mythical Horses fabric line with its selvage attached.
This weekend was slated to catch up on some serious stitching, but taking an hour or so out to do these, is fine by me. If you want to help, you can go to the Saskatoon Modern Quilt Guild, who is helping the Humboldt Quilters organize this on social media. There is also a GoFundMe campaign which, at the time of writing this Sunday evening, is closing on $12 million. Takes my breath away.

I did work more in my yellow/gold scraps for my RSC2018 blocks, and I'm happy to keep keeping up with this project this year. Bright yellows and rich golds are this month's colours. 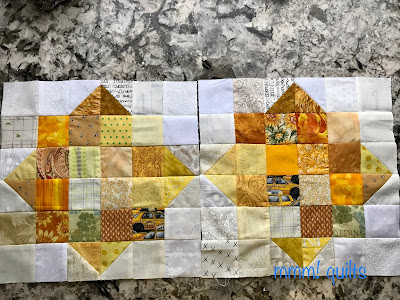 And yes, there is a scrap of wheat in my blocks now. A reminder of what was happening around me when I made these blocks. I love my yellow taxi scraps that worked into these two blocks, mementos from my 2007 trip to NYC.

LOOK what happened with the making of these two blocks!
Don't worry; I have a Rubbermaid plastic container of smallish (under a fat quarter size) white/off-white etc scraps from which I was able to cut more, as well as several 3" squares to make the HSTs. (Gotta point out that arrow😁 I made that on my iPhone in Markup. Cool!)

The other serious stitching that happened resulted in a FFF!--not the FFFtt! that a cat hisses, but a finally finished flimsy! 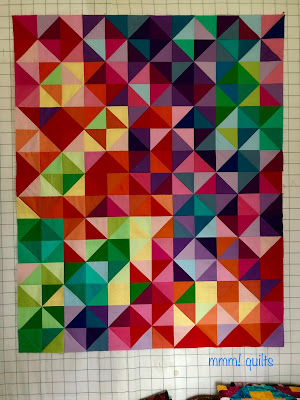 Sorry for an inside shot, but it is pouring down and blowing, well blowing a bit less than the past 48 hours, but the rain hasn't lessened one bit, and we are under all kinds of flood warnings...but OH! how I love this top! Oh, how glad am I that I have finally made the first-ever-I-downloaded pattern from Craftsy, before these Postcard from Sweden QALs were a thing. Now to quilt this puppy and get it done for the linky that happens on April 18 right here on the blog. I'm thinking wavy organic lines, but I may veer off the perceived plan of action a wee bit, you know me... Pressure is good though to make me follow the KISS rule.

I ended up with several extra HSTs, which is to be expected when you cut squares and then cut them in half and you use an odd number. However, I do have four triangles left from Lake...as well as some other colours whose names escape me. A cushion cover or pillow shams might be in order methinks. I made the smaller size, by accident, menopausal brain short-circuiting again on anything math or numbers-related. I hate that! nvm I will take it to yoga as well for my students to ogle...bringing quilts to sit upon has brought out the several quilters in our yogi midst! I've told them more than once, I'm going to make quilters out of 'em all eventually...ha!

When I pulled out my Bright Pink to cut another square, that I believe was my own fault... that, or the wee ghosties that muck around in my sewing loft have hidden it because the right number are cut from the 1/2 yard I had... Anyhow, this happened:
She has to perch on any and all fabric piles. Put her stamp of approval on, so to speak!

Hope you will check back in tomorrow, Monday, for the start of the New Quilt Bloggers Blog Hop! Eight new bloggers will be introducing themselves and their blogs to you, and I hope you'll pay them a visit. There are lots of great prizes to be won each week of the hop as well. Say a prayer to the Rafflecopter gods that I've set it up right...

My hive made some really fabulous buttons! It was a hard decision which one to pick, but they voted, and here it is: 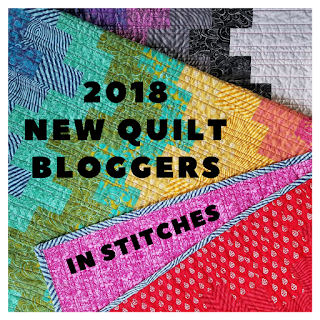 All four of us co-hosts have made landing pages (here is mine) for the hop which will be updated throughout the hop as posts go live. See you tomorrow!

Linking up
with Angela at soscrappy
Posted by Sandra Walker at 8:27 PM