I've wanted to tell this quilt's story for a long time, but the quilt doesn't live with me anymore, and I needed fresh photos. I took these in November 2016, but TBT had already stopped, so there the photos sat... Welcome to Throwback Thursday, where we blog about a quilt we made before our blogging days!
This particular quilt is extra-extra special, because it is the quilt.

The Bear's Paw block was the first quilt block I made after making Grandmother's Fan. Ha! When I think of that fan block I made circa 1990...cotton/poly broadcloth, viyella, (which is a wool/cotton twill weave), pink and burgundy scraps from clothes I'd made, templates drawn on corrugated cardboard, cut out, drawn around onto fabric and then cut with scissors again...yikes. A good friend taught me that block. I wish I still had the pillow I made, as I loved it, but it's long gone. Funny, I just now realize that the first two quilt blocks I made were from scraps. Yep the love/craze for scrappy quilts runs deep.

Sorry for the shaded photos, but this was on an Edmonton visit with my grandson as quilt holder at the playground by his house where we could get the height needed, if not quite the photographic conditions desired! I just love love LOVE this natural shot of him, love the wee-ooh, wee-ooh-ness of his mother holding it in the first photo at just a little older than he was in the photo below. 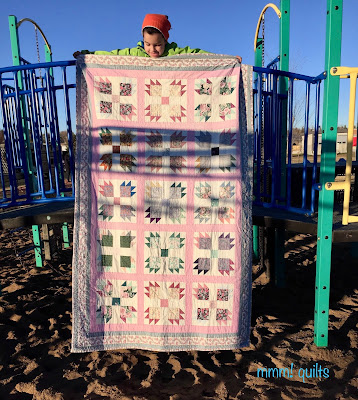 So in 1995 I was on the prowl for a Battenburg lace detachable or sew-in-able collar for matching dresses I was sewing for my daughters, aged 7 and 9. The dresses were cotton (the scraps made another quilt a few years later which will appear on TBT later this year), and the collars and cuffs were velvet, Brianne's blue and Dayna's burgundy. Fabricland just wouldn't have what I needed, but a new store had opened in Sherwood Park around that time, Lori's Fabric Cottage (now known as Lori's Country Cottage). I popped in on the way home from an appointment. Brianne was with me. We found the perfect collars there, as Lori stocked at that time a higher end of dressmaking supplies, as well as a few quilting items. At the till, as I was paying and chatting, this happened:

Brianne: Mum, you should do this.
Me: What? (half paying attention)
Brianne: Enter this contest.
Me: Oh I never win anything; (LOL little did I know that within a year I'd win a little Omega sewing machine from Fabricland!)
Brianne: But you should! (rolls her eyes) It's one dollar...
Me: Oh I don't know...what do you have to do?
Brianne: Make this quilt block...
Lori then explained how the draw worked, that you took home the free pattern that included a small chunk of background fabric, made a block with fabrics of your choosing, returned the block within the week to the store. She then would draw one block from all the entries, and that person would win all the blocks.
Me: But I don't make quilts.
Brianne: Mum! It's a dollar! You should!

So I did, under duress, LOL, pay the dollar and take home the block.

Well, what the heck, I may as well see if I could make damn thing, I mean interesting thing. So I did. And I fell in love.  Hook.  Line.  And sinker.   I think I had taken the tree skirt class at that point so I think I had a rotary cutter and mat. The tree skirt has no label...see why it's so important to label quilts? Somehow the block ended up  the right size.

The floral squares are scraps from a sweet little shorts and blouse set I made Brianne for her 7th birthday (see below), and the claws from a dress when she was four. I figured since she made me do the block, I may as well use fabric from her clothes. I did a little digging through the photo albums and found pics!

As you have guessed, I returned the block within the week's time frame, and on the Monday didn't I get a phone call (no emails then) telling me I'd won, and to stop by and pick up the blocks.

No way! Well, I had won 9 blocks including my own. So, I had to make a few more, cough, like seven, for a total of eight of my own. A couple of the eight I had won I had to toss because they were just not useable, way too big or too small, and/or fabric of the fugly kind. I then had to sign up for a class on how to make a quilt, where I learned about sashing, and a few other important items. I used fabrics from clothes I had made the girls, as well as some from a quillow I had recently made my mum. It's the green and pink floral large squares of the block on the upper right.

The sashing is a pink cotton, Brianne's favourite colour, and the border fabric I bought at Lori's, a border print fabric I just loved. I mitred the corners, carefully matching the lines of the border.

Lori sold wide back fabric way back then, expensive, but I thought well, guess this is what you do, so I bought some, and some batting too, Warm 'n Natural was what she sold...

This quilting is rather pricey of a deal, I remember thinking. 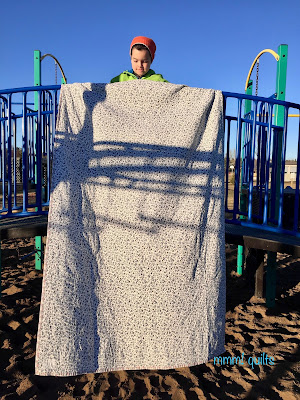 I quilted this on my 1979 Elna by going through each block with an 'X', and ditch-stitching along all the sashing, so each block is outlined. I then decided to do a little fancy quilting in the sashing (even my first quilt, I was wanting to try doing the fancy quilting that I so love). I did what I now know is called the 'egg and dart' quilting motif. I am not sure where I saw it, but I thought it so cool, how you flipped and overlapped a curved shape to get the design.  It was NOT cool trying to quilt it with a walking foot, a generic one I purchased, yep, from Lori's, to fit my Elna. There was so much fabric and batting to stuff between the little 6.5" area! I hadn't had the Quilting in Thirds epiphany yet. However, I persevered, and I was ecstatic with the result.

I even labelled this first quilt using a piece of muslin, doing it the 'right' way by sewing onto (better yet as an integral part of) the back, and then quilting right through it. 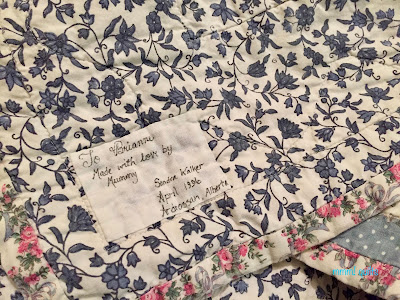 The binding was made by cutting strips of the border fabric, sewing by machine onto the front and then hand-stitching it down to the back. It has stood up well. 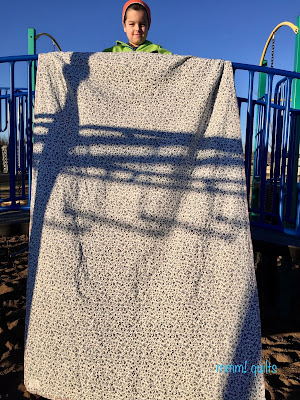 So that's my beloved first quilt story.💖 Brianne doesn't like quilts (gasp) but Brady sure does, so I know that this quilt will be in his good care, and passed on down to his children. I like that.

I can't wait to read about your pre-blogging quilts you've made. Link up below! Then grab a coffee or tea and a comfy spot, and visit some other wonderful quilts with stories behind their creation.


SaveSave
Posted by Sandra Walker at 8:57 AM