I'm sharing my monthly list of things for which I'm grateful. You can see other posts written by like-minded peeps, or join in and write one of your own and link it up with LeeAnna at Not Afraid of Color.

1. I love books. I am on track to reading two books a month this year, which is actually peanuts when I consider how I often would read nearly 50 in a year... Retirement and part-time working is not as full of unplanned time as one would think. I've been reading my own library, having learned the hard way once never to take a library book with me when I fly away somewhere. Still, I did take Harry's Trees with me, but left it in the truck parked safely at Toronto airport while we flitted around Europe and the UK. Finished it on the drive home. It's excellent.

I read these two while we were gone:
If you haven't read any Derek Tangye, you must. He and his wife had very intense jobs, his was in MI6, hers in a top position at the London Savoy Hotel. They left it all and went to live on a little farm in a 17th c cottage in Cornwall, making their living by selling daffodils and potatoes, which they grew on their farm. He just has such a gentle way of describing their lives, musing about life in general, and telling us about the cats that adopted them over the years.


I read this one in the week we've been back: 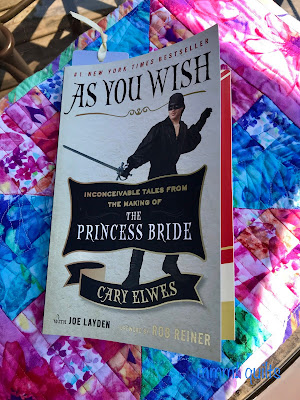 The Princess Bride is one of my favourite movies, and reading this brought it all back with another layer added. I highly recommend reading it if you love the movie.

I'm currently enjoying the last in Mary Stewart's trilogy about King Arthur, The Last Enchantment. It's a huge tome, which I love. I love thick books! I love all things King Arthur, and next time I go to England I plan to be in Cornwall and go to Tintagel, and maybe visit the area where the Tangyes lived. I consider this trilogy a classic, so that is fulfilling a goal to reading some more classics. (Sidenote: my goals are in my head this year, not on the blog, just didn't have time nor did I feel like it this year for whatever reason.) 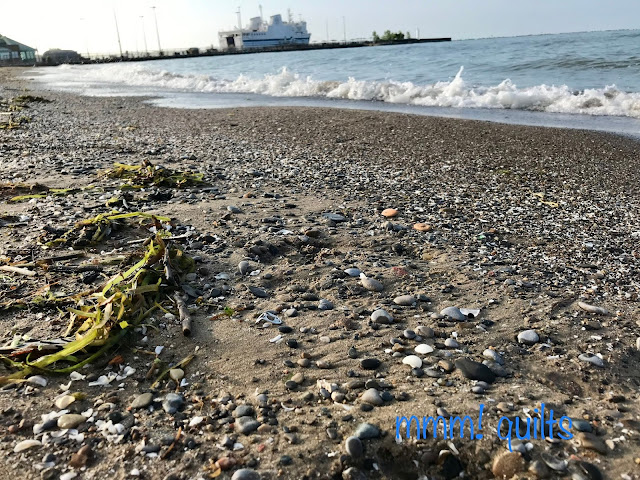 I love collecting the gazillion pieces of beach glass I find at this particular beach, several green ones that day, along with Lucky Stones, (there are five on the left) and also I really like making beach glass dishes with my finds.

3. This year I like that the Windsor Symphony played one of their Concerts in the Park at Seacliff Beach in Leamington, and that my darling husband, who is not really a fan of classical music, came along with me. I may have bribed him with a soft ice cream cone (big spender: $1 at McDonald's) and he also enjoys this particular lake front park. They also played a few movie pieces, so that was good, and even did a 'shredding violins' version, to quote our conductor, of Deep Purple's 'Smoke On the Water'. 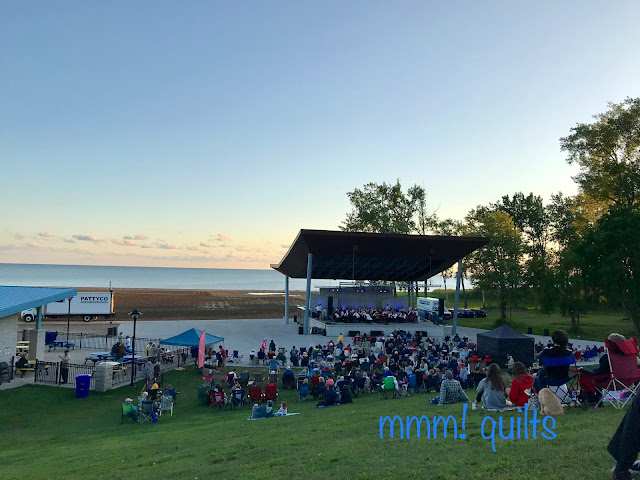 There were around 300 people here that night. This photo doesn't show the other half of the hill (we were seated on the left side), nor the people behind us and those higher up the hill. Isn't it a fabulous place for an outdoor pavilion for concerts?

4. I really enjoyed the movie on Netflix, Won't You Be My Neighbour which is about Fred Rogers. My girls loved his show when they were growing up. I used to make fun of it and roll my eyes, until I watched more of it and then I realized the charm and seriousness and importance of it ,not to mention the wise and caring Mr. Rogers himself.


5. I often say how much I love living in the fruit and veggie basket of Ontario. This past month we've enjoyed freshly picked nectarines, corn, and more glorious sun-ripened tomatoes from farms across the road from us. I made this version of a recipe Brianne sent me, substituting spinach, as per her suggestion, for the basil. It's on a piece of naan, and is grilled and was yummy. 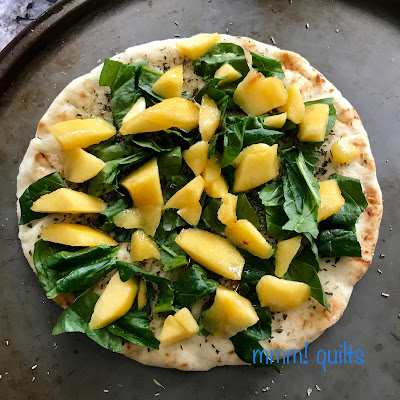 6. Speaking of food, oh man, I could've brought back an entire suitcase of English goodies. I love Eccles cakes and I was ecstatic to find these authentic Lancashire ones. 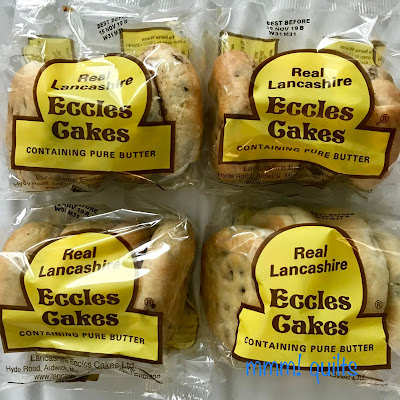 I need to find a recipe online to make these at home.

7. I love my Brady. He FaceTimed me and gave me a much-needed pick-me-up when I was pretty low. He just wanted to talk to his nana. He talks to his grampa (they spell it that way upon my husband's insistence) every night and often during the day too in the summer. He's quite the sensitive soul, and what 11-year-old would not only think this, but act upon it?

8. I love it when people send me pics of my gifts in use. Brianne sent me these a few days ago specifically to put on the blog. 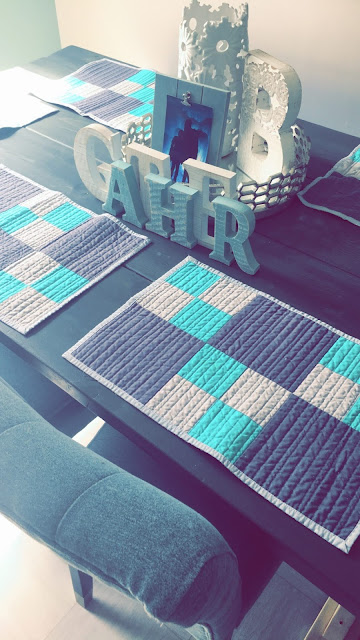 I just love her kitchen, well her entire house... 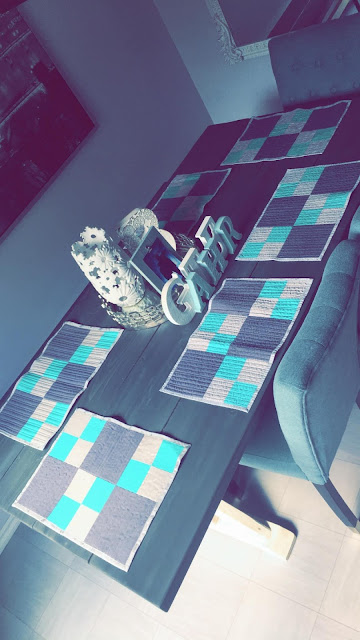 9. I love Ashtanga yoga. I also love Yin. The two complement each other so well, one being hot and sweaty and strength-building, the other being quiet and meditative and deep tissue stressing. It's sometimes so very hard to get up at 5:50 am and drive for 45 minutes each way to practise, but often when I'm in the practice, and always afterwards, I am so glad. Glad that I've worked hard, glad I can do the things I can, glad when there's progress, grateful for my body and its abilities. I used to do yoga posts once a month and I always meant to do Deer Pose as it's so good for your hip joints, especially after sitting sewing for long periods of time. So here's a quick pic and a link to the description on Bernie Clark's website.


10. I really like this Mars drink I bought in Oxford. 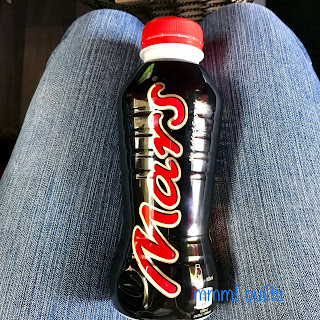 10. I like this drinking water station in the train station in London. 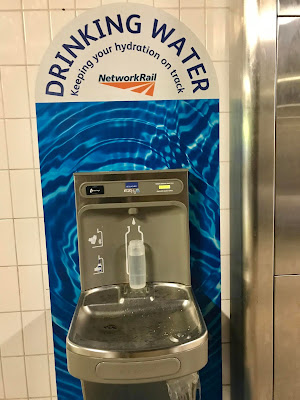 11. I posted a few pics on Instagram of this next like. I like, no I love that many hotels in England are not providing guests with those little plastic bottles of shampoo, body wash and lotion. Rather they are doing this: 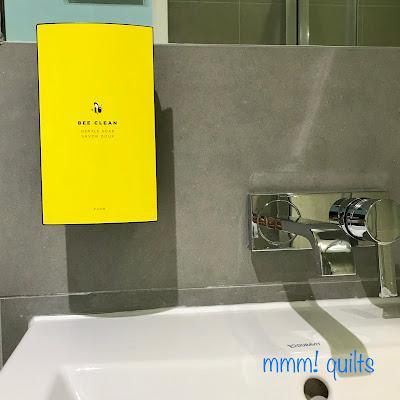 Refilled by the maid, these are in the shower as well as at the sink. This particular one was at our London hotel. Well, actually in Hayes, a suburb of London. Oddly enough, we didn't see any of these in Spain, France, or Italy. Iceland had them though.

12. I love these pink flowers, which, when I looked them up using my Picture This app, found out that they are Amaryllis. 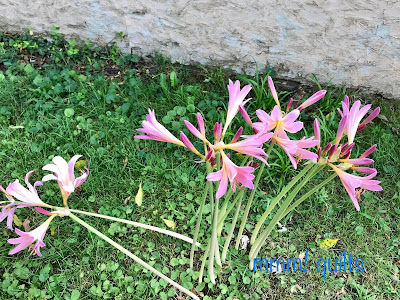 There are a whole bunch of them scattered around in the lot at the end of my street right on Lake Erie, that has been sold now, sniff. It is where I have taken several photos of my quilts. I envision becoming friends with the 80-year-old couple who has bought it upon which to build their home, so that I can still take some photos there! I hope to talk to my friend who has been looking after the lot for the past many years, that I can perhaps dig one bunch up to plant here, since they will most likely be killed when they dig the basement for the house.

13. I like this fuzzy caterpillar that sat for a long time on our front step. I moved her to one of the bushes, being careful to get her onto some paper, and avoid touching the black spikes which can cause irritation in some people I found out.

14. I like my Imaginary Friends. I met up with one in Bolton, England. This is Sue. She and I met through one of my QALs where we discovered many things in common, one of them being that she lives not too far from my mum's home town of Bolton, Lancashire, England. It's her husband who dubs the friends we make online through QBL (Quilting Blog Land) as Imaginary Friends. We vehemently disagree, but I do get a chuckle out of his nomenclature. We had a wonderful lunch together at a favourite place of Mum's, Smithills' Hall. Something in common here too that is of the wee-ooh, wee-ooh Twilight Zone calling kind: Sue and her husband had their wedding reception here! 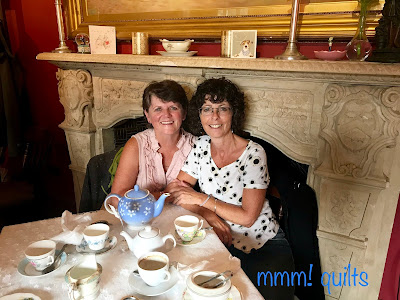 More on my Imaginary Friends in an upcoming post that I am dedicating to them, as they bring me much joy.

15. I like what my friend Kathleen does on her blog and so I am copying it here:

Coming Up on the Blog:

Posted by Sandra Walker at 5:00 AM