I now have two more of these scraps boxes complete! 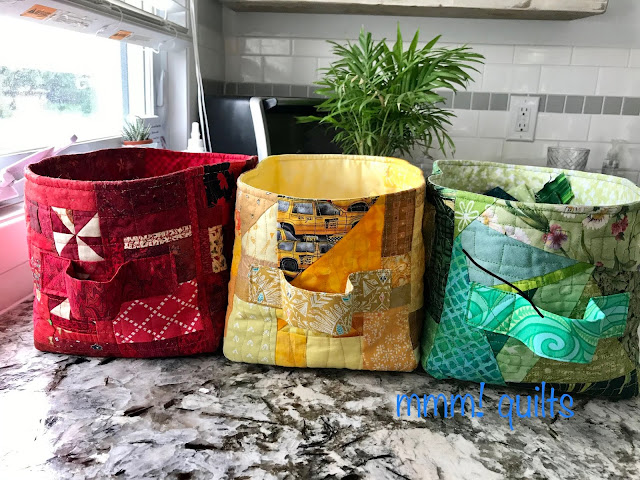 That photo right there makes me HAPPY! I cannot wait to have them all done, in a pretty rainbow, in my new sewing room one day in the not-too-distant future.

I already had finished the green one back when it was a squirrel. Yeah squirrels have babies. (known as kits!) These are made following Angela's tutorial which is here. I actually made the green one slightly bigger as I have a lot of green scraps. It isn't really apparent from the photo or IRL, and I'm glad because I now want them all uniform, and I do like Angela's size specs. I made it slightly bigger because I have a lot of green scraps (they have, make that had, their own dedicated Rubbermaid plastic container), and they all fit wonderfully inside this one. When it comes to blue, I'll be making two, a light blue and a dark blue one. Oh, and I have the panels made already for the turquoise one! It's my largest stash stack and scraps box.

I did show you the panels for the red one back in about April/May, but here they are once more: 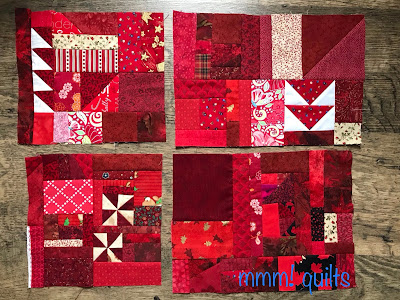 I find that these work up quickly as leader/ender projects. And they may be rather addictive, like a jigsaw puzzle... 'just one more piece...'

The red one all done, back and side view: 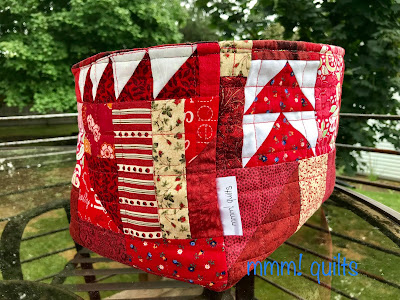 I quilted it with a simple ballpark 1" grid with straightish lines.This is the first one where I put a label on it. It's one from the batch they sent me that was incorrect. The 'mmm! quilts' is there but they forgot the 'Made by... ' part on the flip side. Do you notice a few pieces of my daughters' smocked dresses in the box?! I told you they've worked their way into pretty much every RSC project since I joined in. This box is the most creative with flying geese, HSTs, and pinwheels. 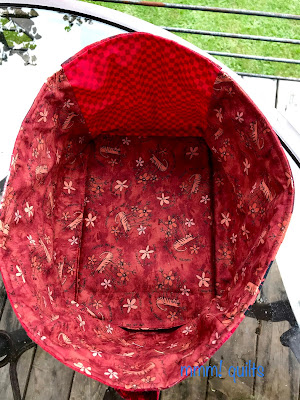 One of my favourite reds is this cat fabric by Buggy Barn. I have it in dusty purple too. I decided to make one end scrappy with a piece of this Daisy Kingdom check fabric.

The yellow one, back and one side view: 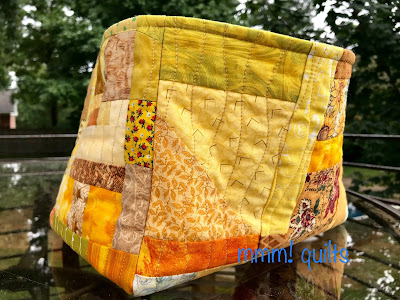 See that dusty gold rectangle second from the bottom on the seam line? That's from about 1996, used in a Stack 'n Whack quilt (Bethany Reynolds' method for creating kaleidoscopes) I made for my brother-in-law and sister-in-law. There's another much-loved scrap on the side towards the bottom with red in it. That's from France, bought in 2007, with making a quilt as a memento in mind.... no, the quilt isn't made but three makeup bags are from it! I need to make that quilt...I've been back twice since that first trip! 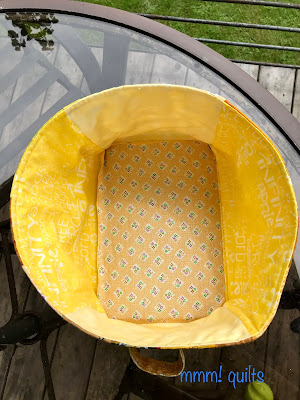 This lining I made really scrappy, using three different yellows. I love the Zen Chic one. It's a piece from the first pattern I released, 'Pocketful of Sunshine', which used to be on Craftsy as a freebie, but they removed it. However, as of today, ta-da! It is on Etsy right here, and for a mere $2 for the next two weeks . You read that right. It's not quite as polished as my second and third ones, nor the subsequent ones, which, yes, I'm working on! Once I get these next ones out, I plan to redo this one so that they all have the same 'brand'. In case you are curious, here it is: 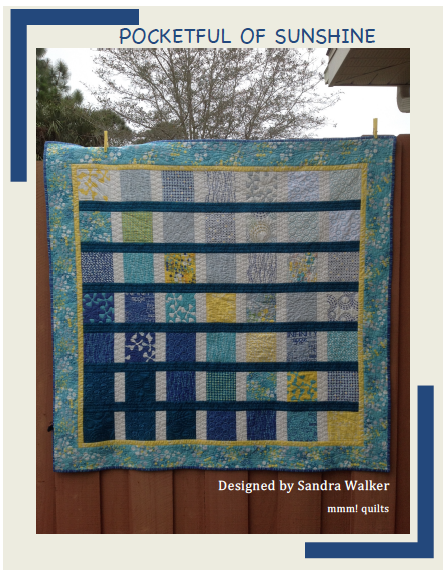 In the bottom of the baskets is a rectangle of this foam: 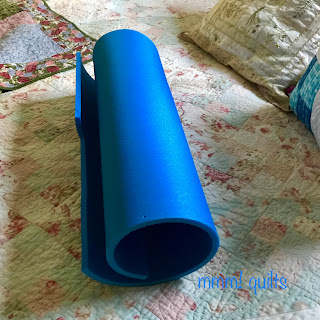 A few people have asked about it, as I use it in bags on the bottom too, encasing it with a slipcover to match the lining. It is campers' foam. I got this at Canadian Tire years ago in the camping department.

I have panels made for the turquoise, orange and pink ones, but now it's time to switch to Brady's quilt, and get planning the September Island Batik bear paw one.

And be sure to pop back on Saturday for the monthly DrEAMi! linky where we celebrate all our squirrelly habits by linking up a post with a project from the past month that had us Dropping Everything And Making it!

Linking up
Quilt Fabrication
Posted by Sandra Walker at 5:00 AM