And, just like that, I have a second project done for the October challenge for Island Batik! I need to thank Wendy of Pieceful Thoughts for this 'squir-key'. I saw her turkey, and, in keeping with a good squirrel project, had to go right out and find the Quilts 'n More magazine it was in, buy it, and then not rest (well I did because I had two other big quilts to make, and one runner) until it was a finished quilt! 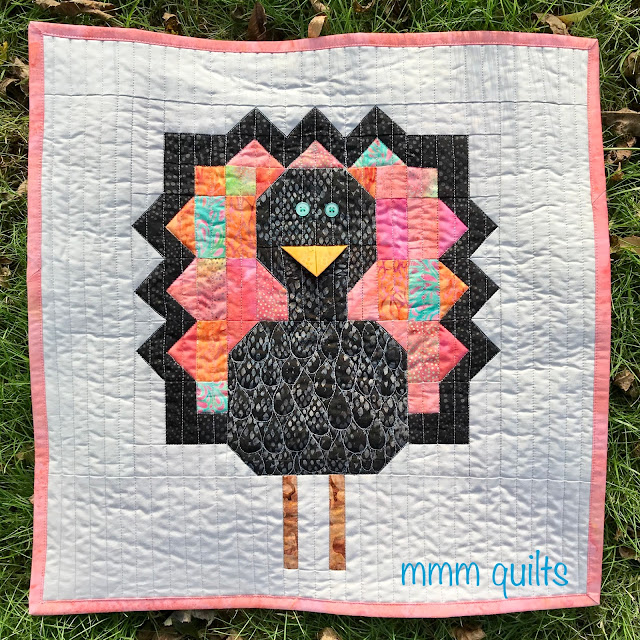 This is on my Q4FAL List which is here. All of these beautiful fabrics were provided to me by Island Batik. Aurifil provided the thread I used to piece this and stitch down the binding. Hobbs Batting provided the batting, which is a scrap of 80/20 Cotton/Wool blend, just lovely stuff to quilt. I've quilted with it now on Avril, my longarm and also on my DSM, my Bernina. 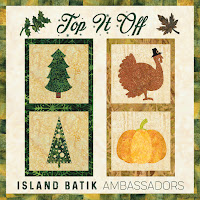 For the October challenge, we were to create a runner or table topper that involved some kind of appliqué. My first one, Give thanks, used a lot of appliqué. This second one doesn't exactly, unless you count applying (lol) the button eyes and then making the 3D beak and inserting it after the quilt top was done... squeal! This was not in the pattern, but Greta told me she needed a voice, and what's a girl to do but give her a beak with which to squeak!

So she kinda/sorta has some appliqué. Meh, technically she doesn't but it's a second project and I'm good with what she is. I think Island Batik will be too; they're an all-inclusive company, sending giveaways and boxes to ambassadors around the globe, so Greta will be most welcome, I know it. 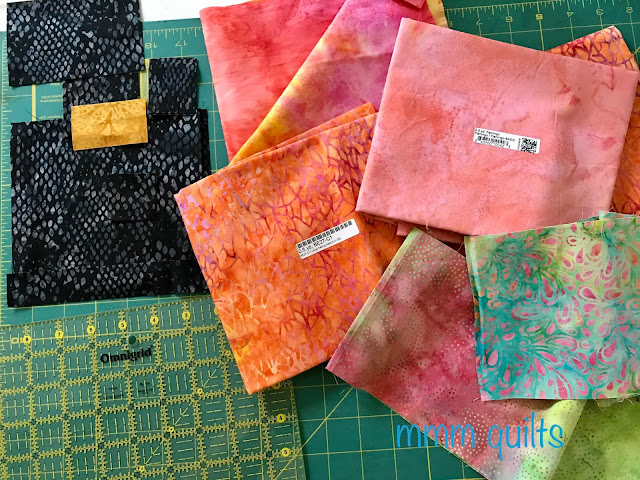 These are the fabrics I chose. There are some 5" strips of black (like doesn't that black one just scream-gobble turkey?) I don't know about you, but turkeys in southern Ontario, of which there are plenty, are black, white and red, not tan and orange, and um, okay not black and pink and orange with a hit of turquoise... but Greta struts her stuff to her own tune. Sidenote: turkeys are so abundant this year that they've moved from the county into the city of Windsor. They even made the CBC news this past week lol! I used some Basics and Blenders and 5" strips for her pink, orange and turquoise tail feathers.

She was a flimsy in a few sessions of sewing on Tillie, my 1951 Scottish-made Featherweight.
Kristina Brinkerhoff of Center Street Quilts is the designer. She quilted straight lines with her walking foot, and I liked that look.

Greta had some ideas of her own, however.

She wanted feathers on her breast once I aquiesced to her 3D beak. Yeah, about that beak: I could just 'see' it, prairie-point-style and all, and so what was I to do, but rip out her upper lip seam (ouch) and insert said prairie-point beak? How could I say no to feathers? (And she gave me an idea for a new FMQ filler as a thank you, but that's another post, once I practice it.)

Just as with Brianne's Give thanks runner, I mainly used the Madeira polyneon for quilting. I cannot say enough about the sheen. And then Greta said, "It's not enough!" And I said, 'Heh?' and then I realized she wanted Sulky Holoshimmer metallic thread in her pink and orange tail feathers. Okaaaay... that meant a lot of stops and starts. However, after stitching super-tiny stitches in grey polyester, cutting only the top thread, inserting a Schmetz metallica needle, threading up with Holoshimmer, sewing a few super-tiny stitches with it and then continuing on until I had to stop to switch back to grey...I hit upon a nifty solution: use the ditch to travel! Very few insane switching of threads and needles ensued. 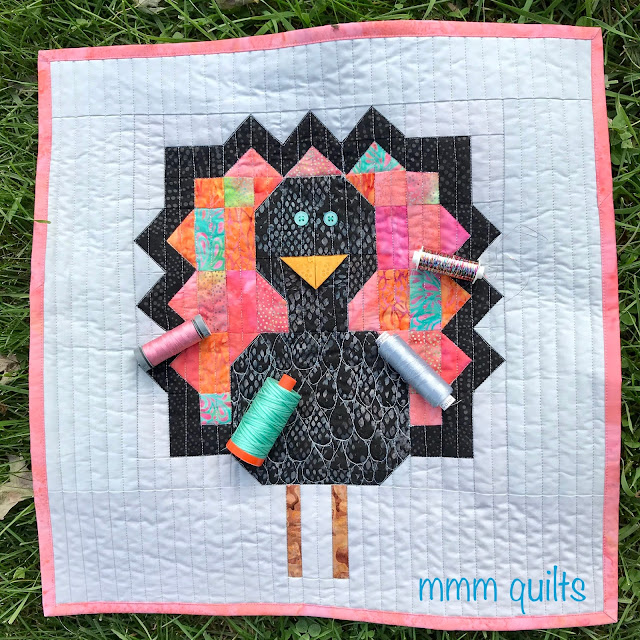 I used Aurifil variegated 50 wt (my own) to hand stitch her eyes in place, and I used the pink 28 wt Aurifil sent me to topstitch the binding down on the front of the mini quilt. Speaking of binding, I got quite the kick out of using one of Island Batik's Basics, 'Flamingo' to bind a turkey mini quilt! 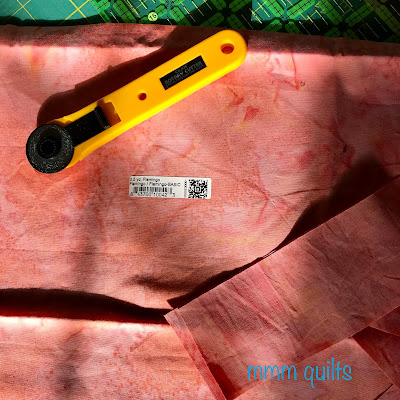 Here's the back, some left over yardage of 'Dear William' from last year, the gold of which has a nice autumn vibe. 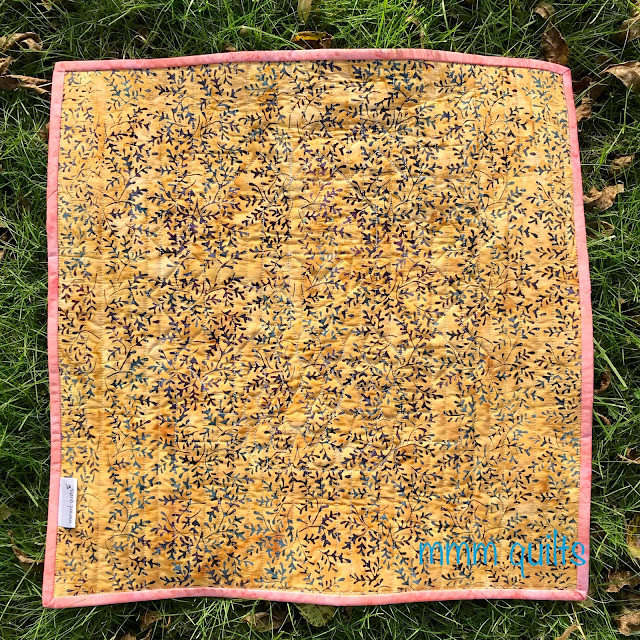 There's my satin label; I'm getting good at remembering to insert it before binding!

Bella was a great quilt inspector, as noted on Instagram. She found a spot I'd missed with the walking foot quilting. 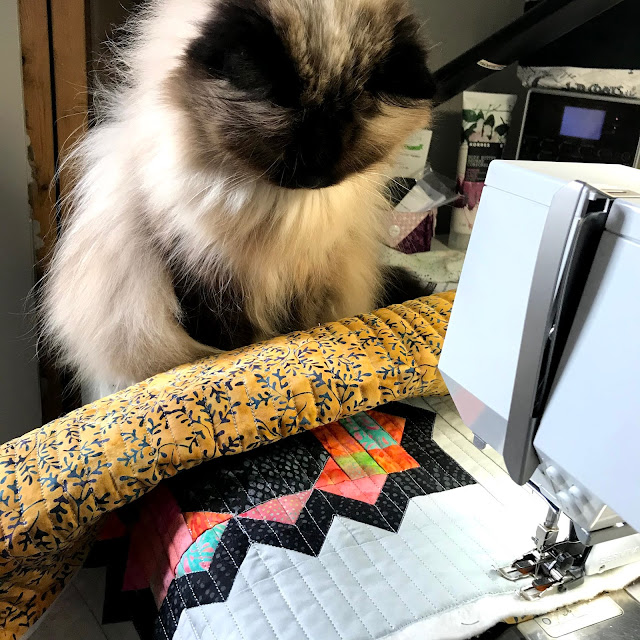 Those of you more observant types will notice exposed 2X4's (I think) behind Bella...sigh. MacGyver had to carve out two ceiling to floor lengths under the dormer to show the inspector (not Bella, but just as persnickety) that the dormer was fully supported with a double 2X4 down to the concrete blocks of the basement. Sigh again.

Here's Greta the Gobbler in the wild, well, in the straw; okay actually, technically, in the ornamental grasses! 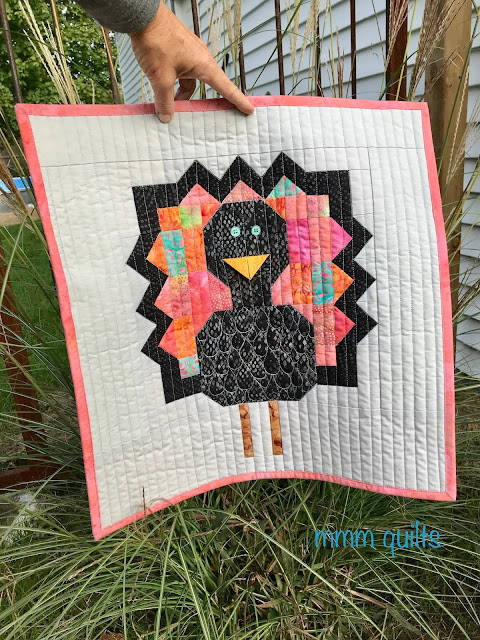 She will live with me until either we next see Dayna, as she ihas claimed Greta. I gave Dayna the option of making Greta into a cushion cover, as the original, or a table topper or wallhanging, and she wanted a table topper.

Posted by Sandra Walker at 7:00 AM