With a few hours to spare, I've knocked off another item on my rather lengthy Q4FAL List. 2019 was definitely the year of the placemats, and 2020 so far has been fulfilling family quilty requests. 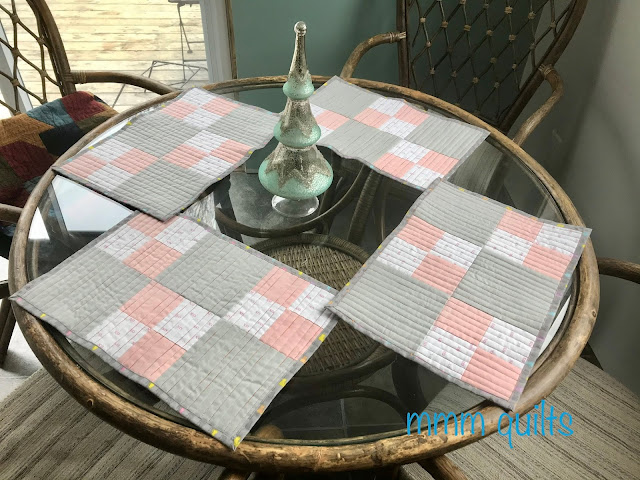 Dayna originally fell in love with the Opal Silk placemats I made for Brianne, asking for those colours. And then, in keeping with her Demando Dayna nickname bestowed upon her by my friend Rose of something rosemade, who has a Demando son, and recognized this quality in my daughter, Dayna said, "Well, I'd like the turquoise ones for my outside table, and I'd like four more for my inside table, but in pink instead of the turquoise." All right then! She opted for a soft pink and I like the look. In all honesty, I am most happy to oblige these quilty requests. The mending or altering requests, not so happy to oblige...
I knew I had a two to three day window before focusing on the Island Batik January challenge (well not really, but I work well under pressure, remember?) so I looked at that Q4 List and thought what could I knock off there in pretty short order? Yes, the Bear Paw baby quilt is almost a flimsy and will be quilted fast as it will be for sale. But then I thought hmm, I need to finish up some of these 'want to', or 'have been asked to' makes for my family. Enter the placemats.

Both daughters like the no frills placemat pattern I designed. They consist of three squares @ 6.5", alternated with three 4-patches. To make the 4-patches, sew two 3.5" squares of one colour with two 3.5" squares of another. Lay them out how you'd like. I did two placemats with the pink in the top left corner of the 4-patches, and the other two with the white 'XO' fabric there. The placemat will be 12.5 X 18.5". Layer it with batting and backing. 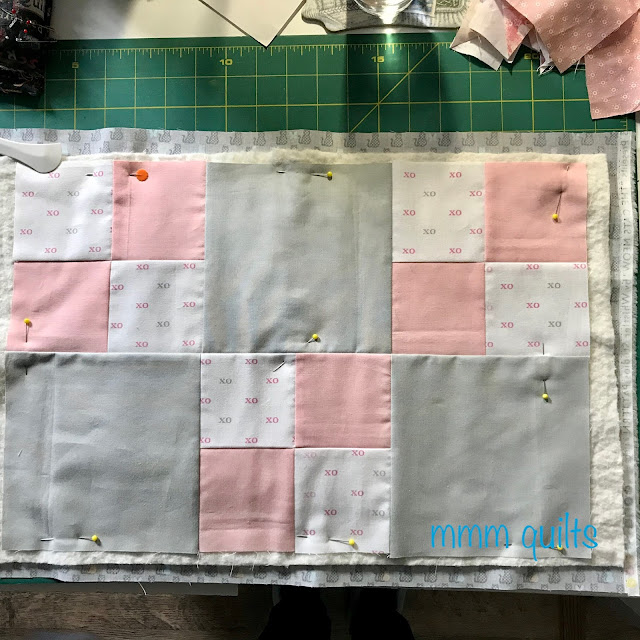 Here is the spinning seams tip that so many loved when I hosted the Postcard From Sweden QAL two years ago. This time I made a little video for you that may help clarify that initial 'pull apart the few stitches of the intersecting seams' step:
Note that this technique only works with nested seams; if you press yours open, they won't spin.

I bring the backing to the front as the binding. To do this, I leave a good inch extra of backing fabric all the way around the placemat. Then I just turn over the seams 1/2" press, and turn over once more and topstitch the double-fold down as the binding. But I'm getting ahead of myself.

A tip for quilting the straight lines, which is what my daughters both wanted, is to use a Hera marker.

The placemat palooza started with Brianne requesting placemats a year ago, but "not quilty ones." Dayna liked the simplicity of the straight lines and simple patchwork too, and they do lie nice and flat. I considered quilting an inch apart but it seemed a little puffy. I varied the width on previous placemats, but for the pink ones, I did half an inch apart. These placemats got two lines of Sulky Blendables 12 weight thread, alternating with one line of Aurifil 50 weight. I love how it looks. 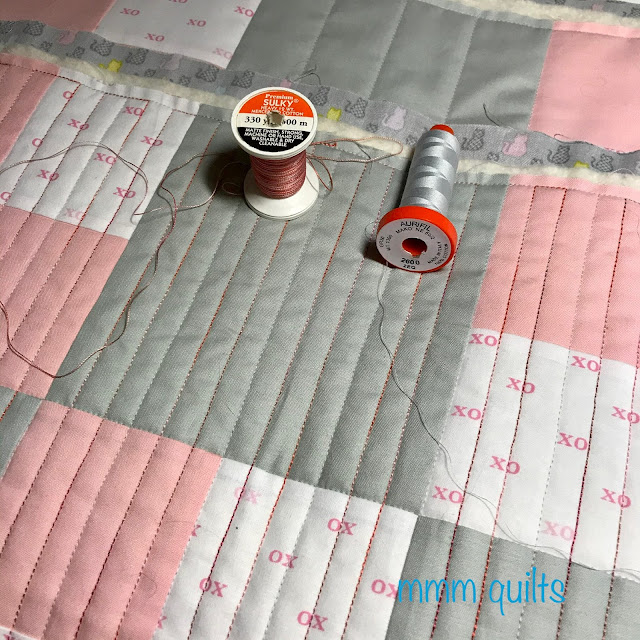 It didn't take too long, even with getting a wee job from MacGyver to carefully remove extra drywall mud dust from the crevices around the dormer windows and carefully with a DAMP sponge (he told me like five times, and no I wasn't at all ticked to be told that many times...) to wipe the sills.

Two placemats got topstitched down with the Sulky, and two with the grey Aurifil. 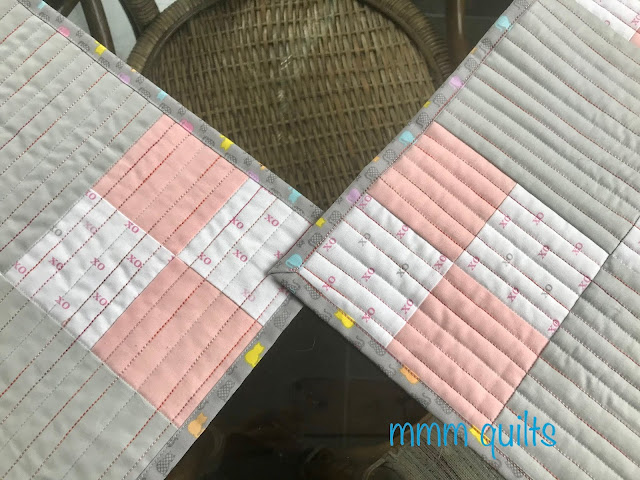 Let's have a look at the backing, shall we? 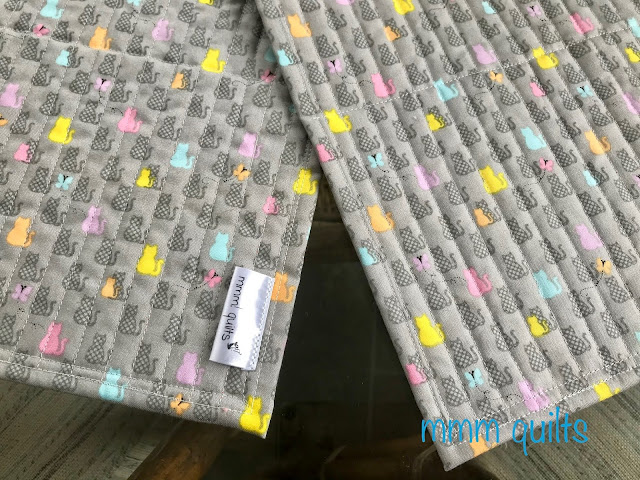 I believe I snagged this yard of fabric out of Sew Sisters Quilt Shop (no affiliation) clearance section a little while ago. I knew it would go to Dayna somewhere down the road. She really liked it as the backing for her placemats. When you use the backing as the binding by bringing it to the front, you don't have a seam on the back in which to insert your label, so I fold over the raw edges and then topstitch the label onto one placemat's corner.

Things have kind of halted on the kitchen reno front as the upstairs is getting all the attention so we can get the final drywall and primer inspection. It has its first coat of primer on up there, yay! We will be selling this much-loved rattan dining set (sniff) in order to have an island (read more storage) in our kitchen. It's not big enough for both. 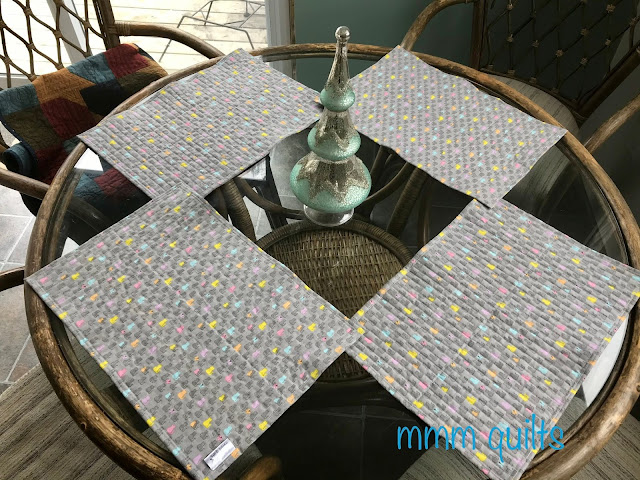 Yes, I still have one Christmas decoration out, my aqua and silver glass tree, because I love it so much, and it's fitting for my kitchen and for January, although we still don't have any snow, which is not fitting for January.

Rolled up ready to go to Dayna! 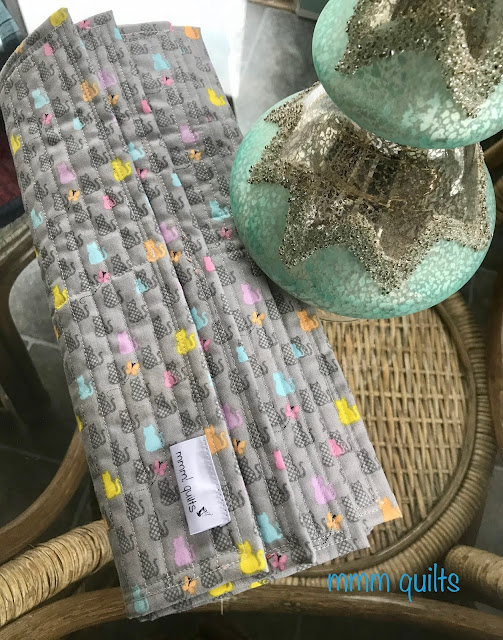 Here is a peek at the sewing room dormer area with one coat of primer on it. I love the angles. MacGyver is going to MacGyver up a barn wood look for the LVL beam you see. That's our fan you can just see in the top right corner. It's so nice to see that up, the new light over the stairs, and all the pot lights! 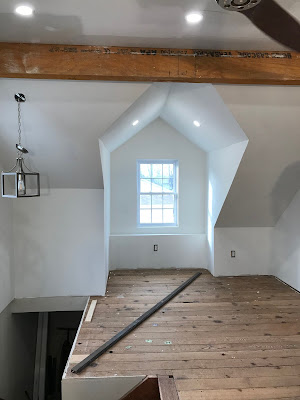