With a deep breath, I am going to enter two quilts into the Bloggers' Quilt Festival.  Amy Ellis, from Amy's Creative Side hosts this event.  This is the first time I've even heard about it, so obviously it's my first time entering.  If you like this quilt, you can vote for it in the Large Quilt Category beginning May 24.

You can see my second entry, Hidden in Plaid Sight, here.

The first quilt I am entering is Seaside Rose.  I blogged about this quilt four times (here, here, here and here) over two months last Fall.  It was the subject of my fourth post after starting my blog!  I bought the quilt as a kit, adorably packaged in a blue wicker basket.  I made the centre and when it came to the borders, I was flummoxed.  So she was folded up for years, yep, years, (8 to be exact) in a drawer in my sewing room because the pattern both stumped and frustrated me.  To make the double row of prairie points, they asked you to apply a strip of the pink gingham fabric on top of the twill, and then to cut away triangles.  From there the remaining triangles were to be hand-appliquéd down.  No thank you!  Long story short, I did the prairie points in two different ways, the inner border using a seminole piecing technique, and the outer border strip-piecing triangles of the prairie point gingham and the border fabric, and sewing that strip to the striped twill border fabric.  It was a test of my patience as well as of my ingenuity as to how to do it all by machine.  It was worth it.

I took her down to our beach on Lake Erie at the end of November 2013 for her final photographs: 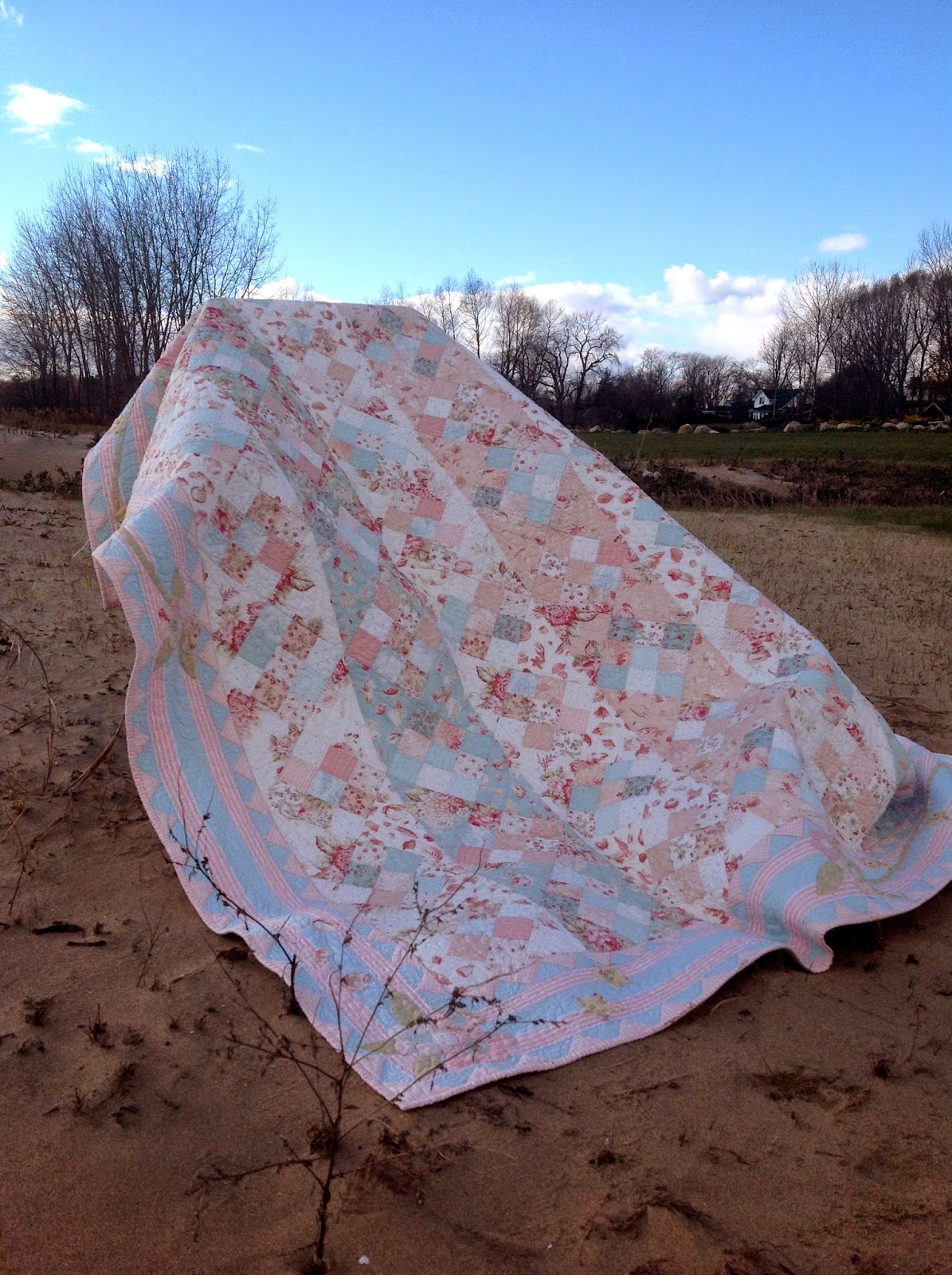 The sand and blue sky that day really showed off her soft palette of colours.

I took a few new pictures this evening for this post.  This was the first quilt kit I had ever bought.  Later I found the same fabric in Florida so I bought enough for the back. 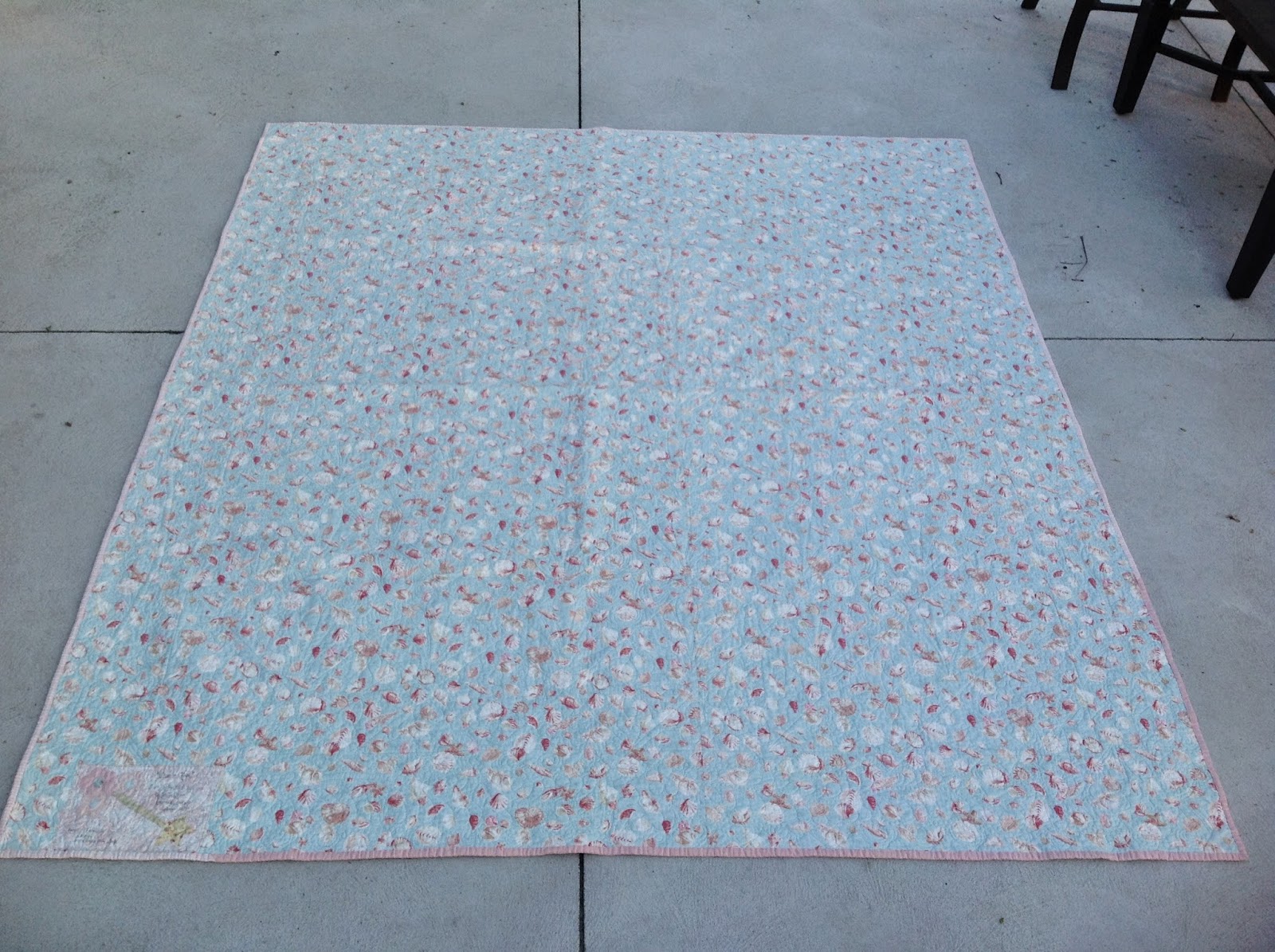 This past Fall, I decided enough was enough, and I wasn't going to let that final border stop me from completing this quilt.  Many hours later, for both figuring out and doing all the prairie points and then more hours for all that appliqué, I had a finished top!

The hurdles were not all done, however.  I wanted the quilting to be extra-special.  This was only my 7th quilt I'd quilted on my new-to-me Avanté.  It has a LOT of quilting on it, but it is still soft and cuddly.  I took Angela Walters' "Free Motion Quilting With Feathers" class on Craftsy, and I knew this would be my class sample on which to practise feathers.  I did swirls and pebbling on either side of the feathers.  I was so pleased with the result: 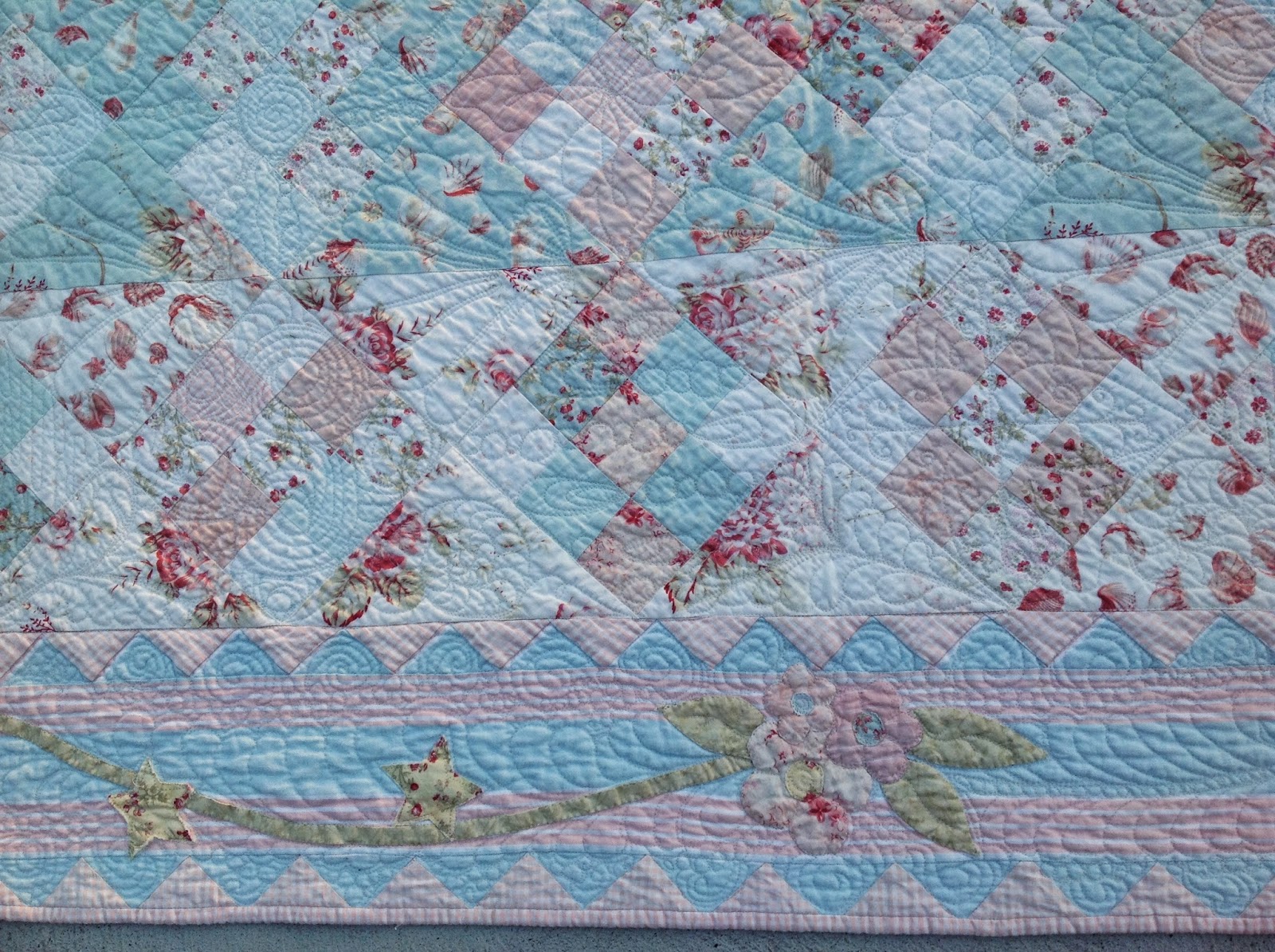 The centre of the quilt has many different motifs, several from Leah Day, one of Angela's, one of Gina Perkes', and one feather motif adapted from Karen McTavish.  I also designed a quilt motif of my own, the seashell that you see (sideways) in the above picture.

I replaced some of the star appliqués with the seashells applied with raw-edge appliqué that you see in the above picture to emphasize the seaside theme. 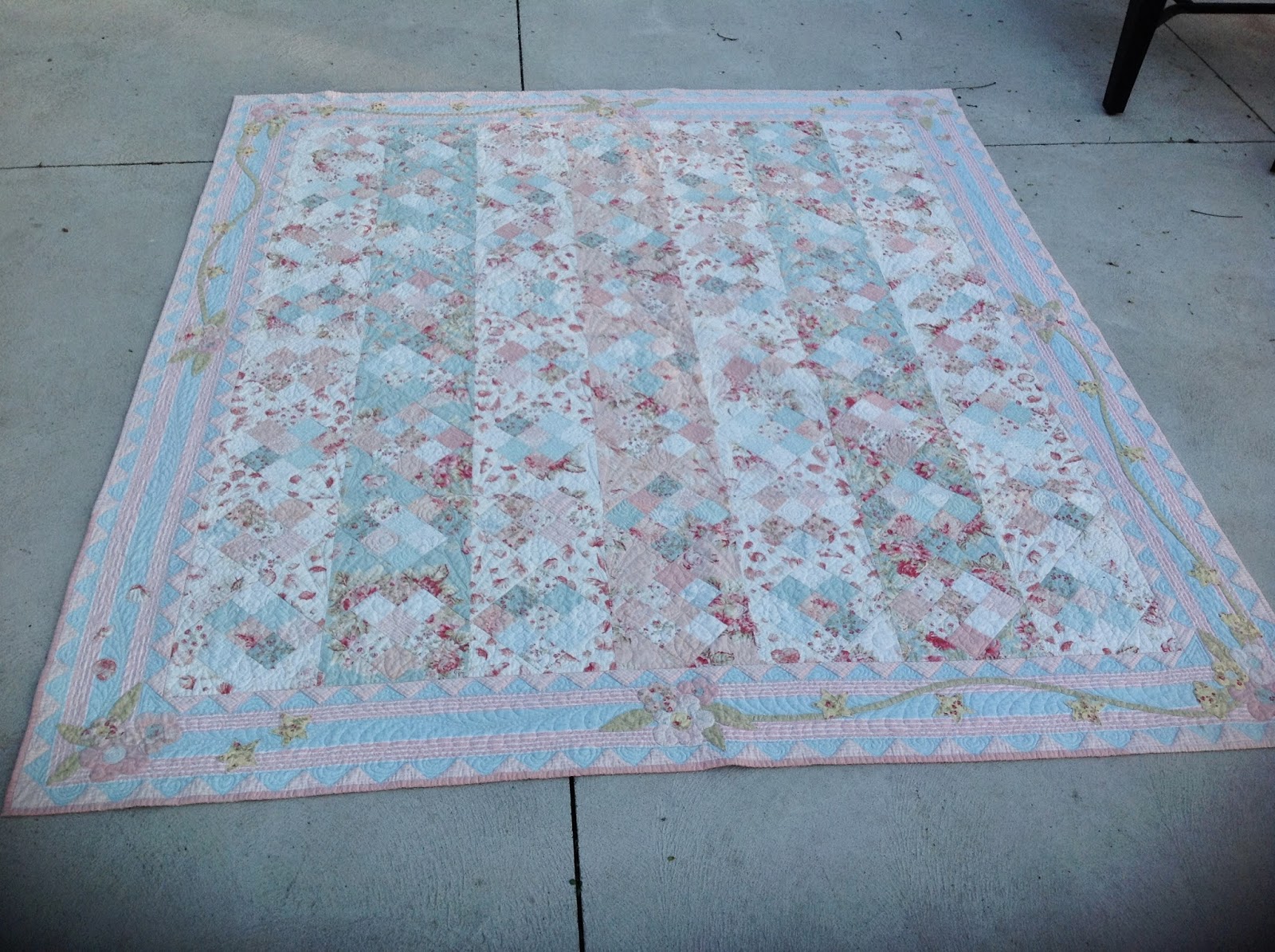 Soft colours on a hard concrete patio!  You can see my very own seashell motif in the picture below:
Rolled up! 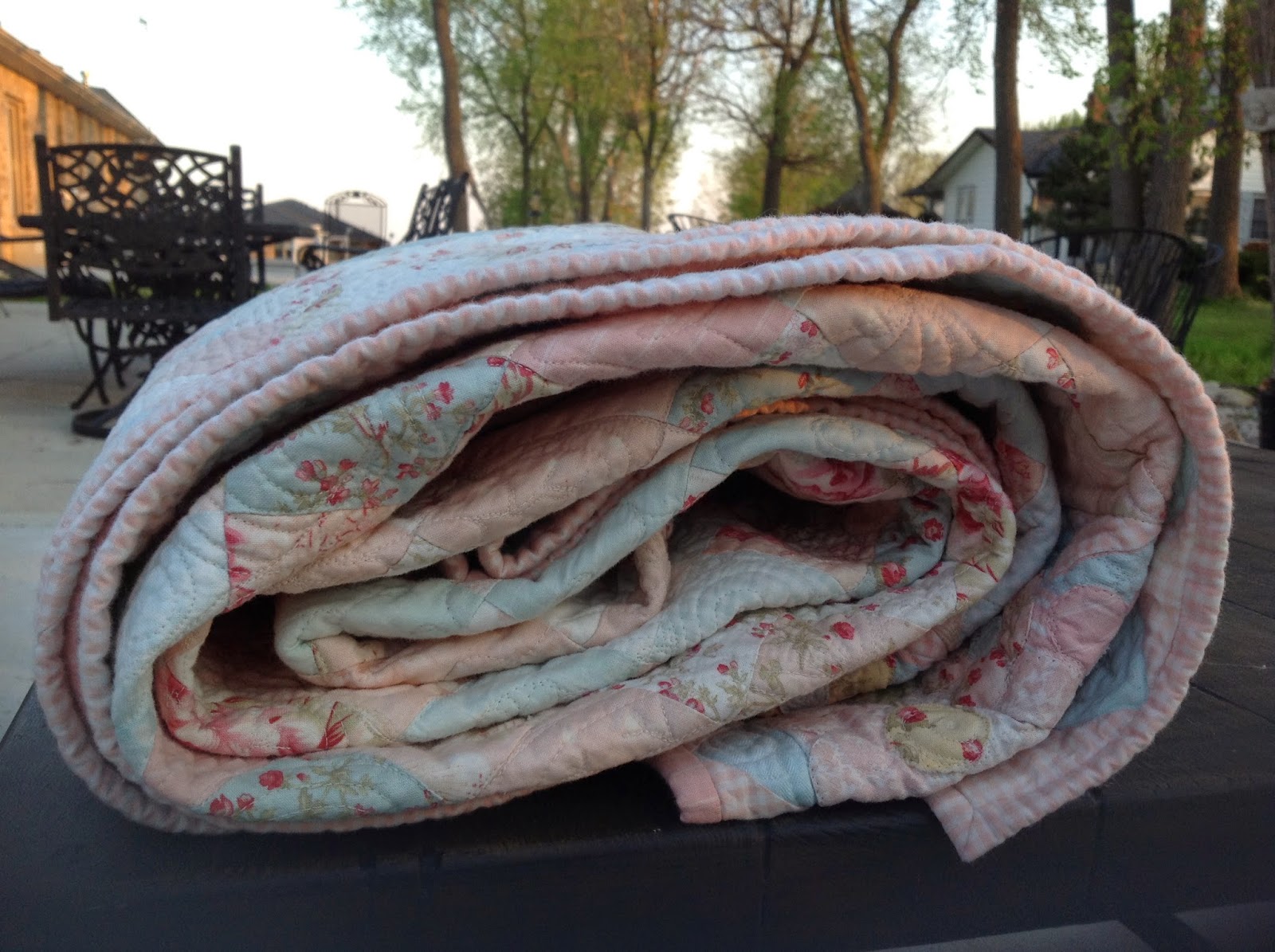 Entered into the Large Quilt Category in the Bloggers' Quilt Festival!  Head on over and take a look.  Lots of eye candy!  Voting begins May 24.

Thanks for visiting and reading about Seaside Rose.