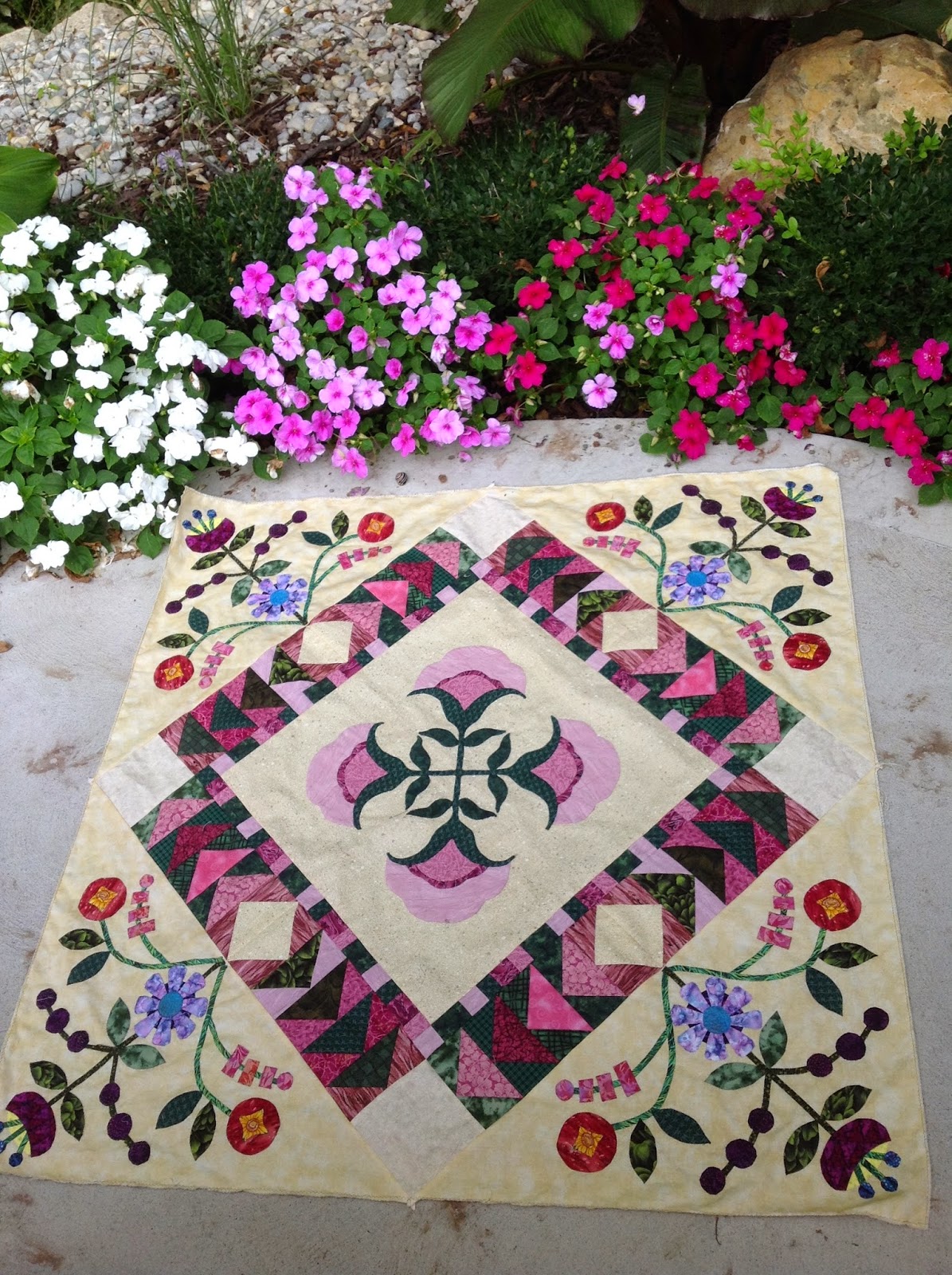 Aside from the marks on the patio from the American Black Walnut trees, it's a lovely setting amongst the gi-normous impatiens, no?  That's four plants, btw.  From a 4-pack of little 1-inch seedlings. They love that corner.  The four on the opposite corner, are half the size.  Weird.

Here's a more or less straight-on shot from last night. 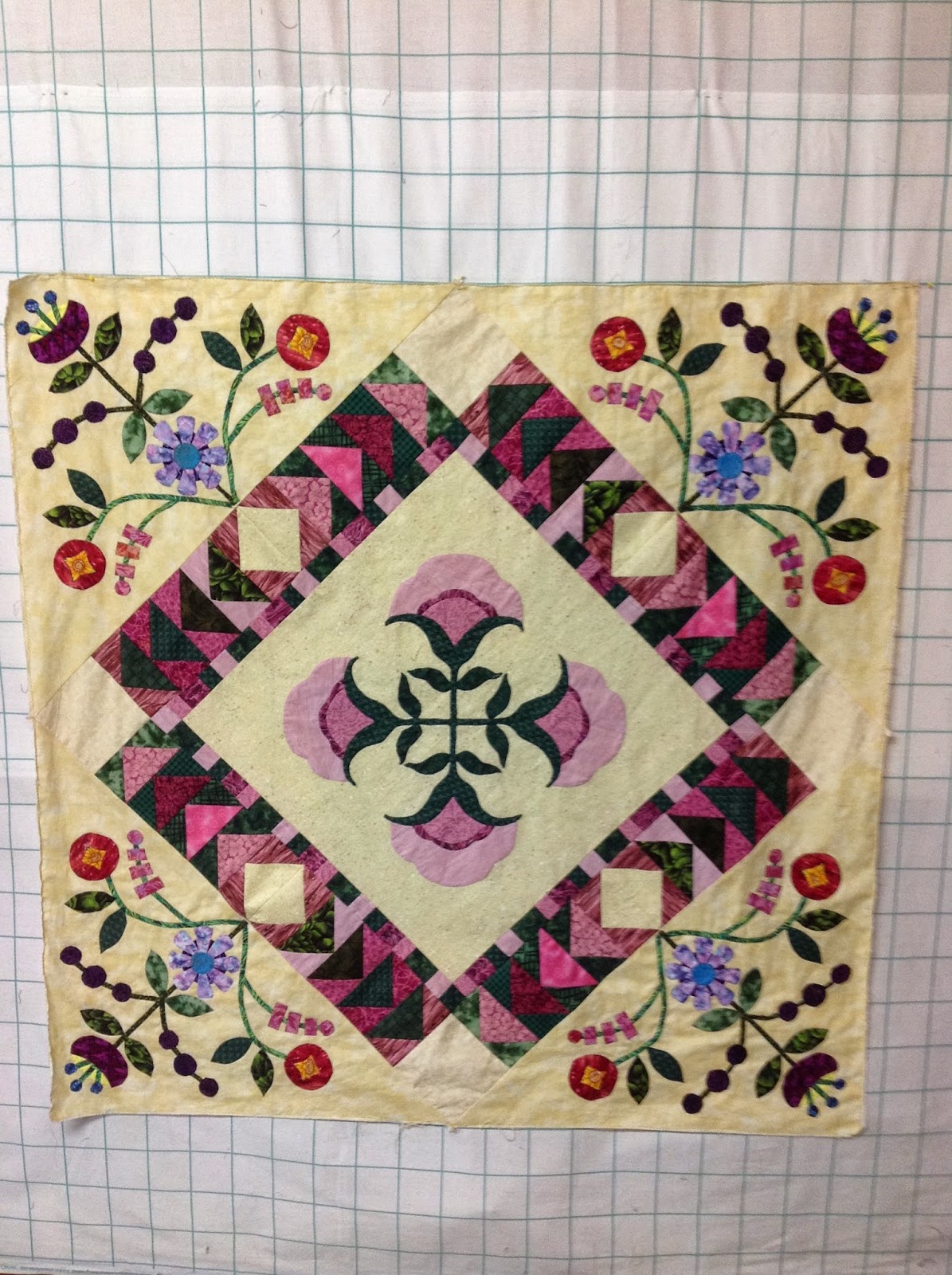 There are 52 pieces (that's counting the stem sections) in each quadrant.  208 in all.  I got the design,  called "Petal by Petal", from the April issue of American Patchwork & Quilting, but modified it slightly.  Her block has the flowers set into an appliquéd basket with a couple more stems of leaves.  And her quilt, 16 blocks, is all done by hand!!

Dayna came over for lunch yesterday, bringing a new salad recipe to try.  It was delicious.  So fresh. 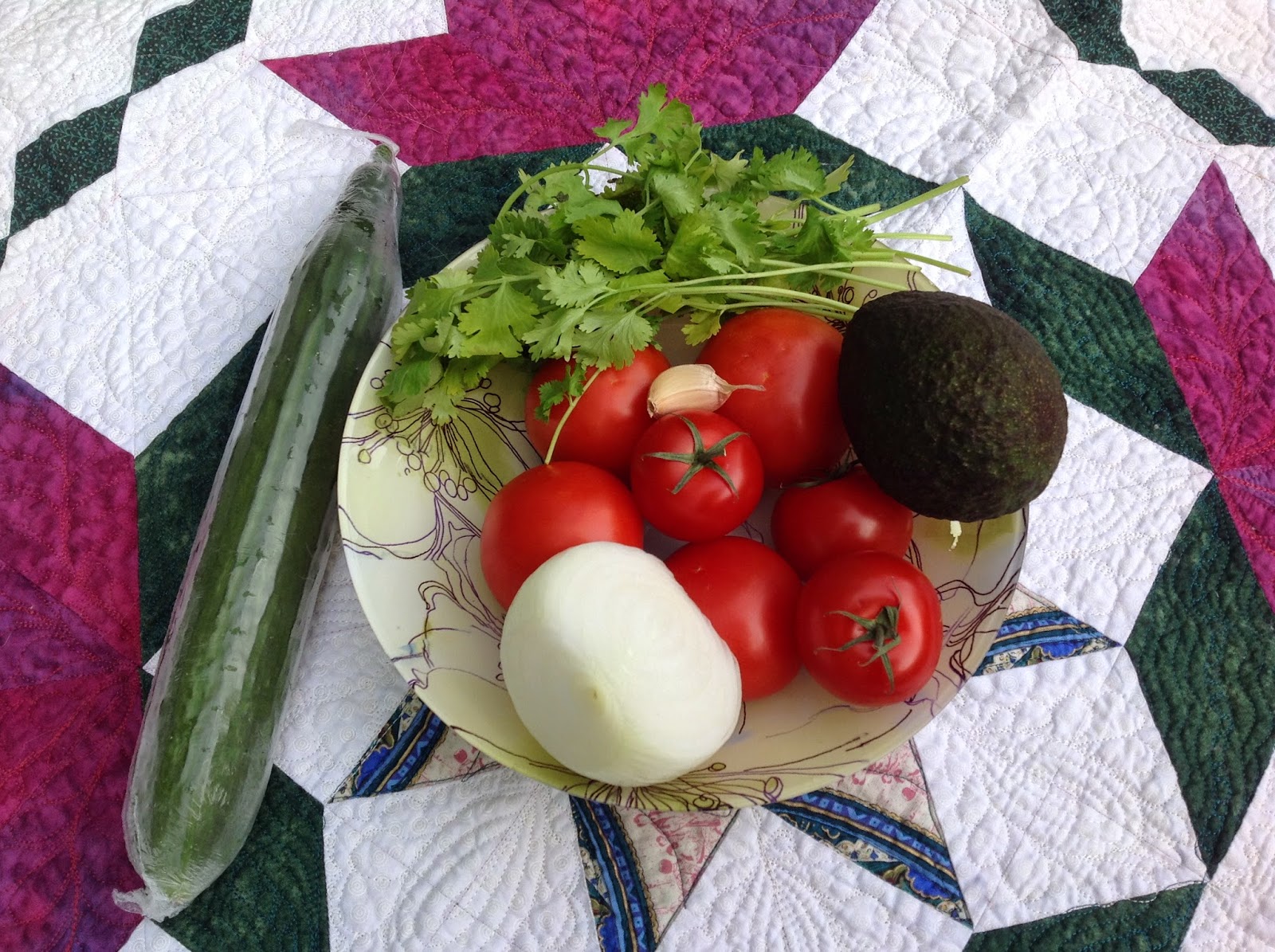 Those are the ingredients.  All from the back yard of Essex County, Kingsville and Ruthven to be exact.  Well, except for the avocado, which is from Mexico, and garlic, (how dumb) from California!  My own cilantro went to seed, hate that.  The cocktail tomatoes, regular tomatoes, and cucumbers are grown just up the road from our house; the cukes are "seconds" which we get from the greenhouse's roadside stand, 3/$1.  Gotta love that!

Add some olive oil and balsamic vinegar and you get this

The next round of the round robin is to put words on it.  Since I can't write the words that I'd like to write on it, haha, with all the pain and aggravation I felt while working through that last round, (but now satisfaction) I've decided to quilt the name of the quilt, "Fleurs", into the next round.  After that it's "put curves on it" so I have an idea of perhaps incorporating a sun onto it.  Then a final pieced border.  Due by the third week of September.  No sweat.

Did I mention I'm giving up the first week of September sewing to spend in sheer unadulterated joy with my beloved grandson, Brady, and our daughter, Brianne, who are coming here for a much-anticipated visit?!  In mid-September, we are going to Watkins Glen, NY, to meet up with dear friends and winter neighbours from Florida, who spend the summers in New York State.  No pressure to finish this (and the paint chip challenge, OMG) by September 25 quilt show.  (Hot flashing profusely now...)

One last ahhh shot of that corner of the garden.  It's filled in so nicely.
Joe says (and he is the gardener guru) we are going to over-winter his banana tree (massive one in the pot on the right of the picture) once again this year.  Think we might need a forklift to get it back into our house this time!!

I'm not linking up with Marelize of Stitch by Stitch for Anything Goes Mondays as she is taking a break.  I might be doing that in September methinks!

Posted by Sandra Walker at 2:28 PM