The Process of Appliqué

Fridays are not a productive day for sewing usually for me.  I go into Windsor to take a Yin yoga class, a 3-hour chunk out of the day with the nearly 1 hour drive each way to downtown from here.  I also teach a yoga class.  Then there's my hour walk with Rocco, which I decided to shorten today in favour of a ball chase and run on the beach.  Two throws, and on that second one, Rocco found something much more palatable, in the dog world that is, with which to douse himself.  Eau de poisson.  Poisson mort.  For those of you who don't speak French, that's a dead fish.  Carcass.  Not only did he do this once, he found another, less skeletal, more reeking flesh, and, ignoring me, legs kicking in the air in glee, (GROSS) he proceeded to rub it in but good.  So I hauled him back up the hill and directly into our shower, where he got scrubbed 3 times with doggie shampoo.  My planned-for hour of sewing before yoga consequently did not happen.

Although the machine did not even get turned on, I did do a little appliqué this evening after I came back from the second beach visit of the day, this one sans chien, enjoying the sunset and company of Jude.  I thought I'd show some of you who don't know what appliqué entails, (Linda X2, both of you!) the process. 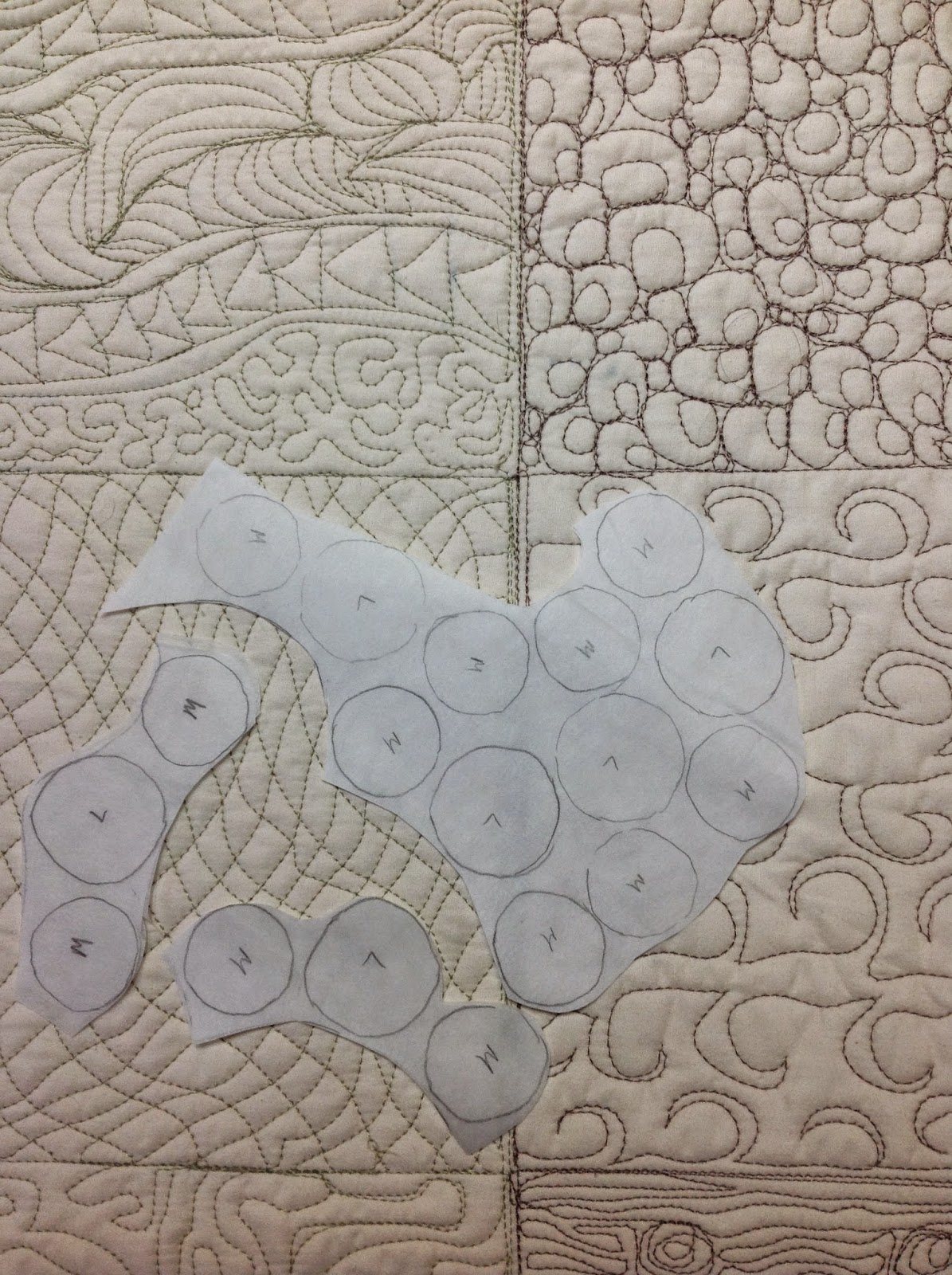 Here are all the circles I traced that I need for the remaining three quadrants. They just need to be cut out on the line now.  I've used freezer paper before, as well as Steam-a-Seam.  This is Steam-a-Seam 2.  It does end up quite soft! 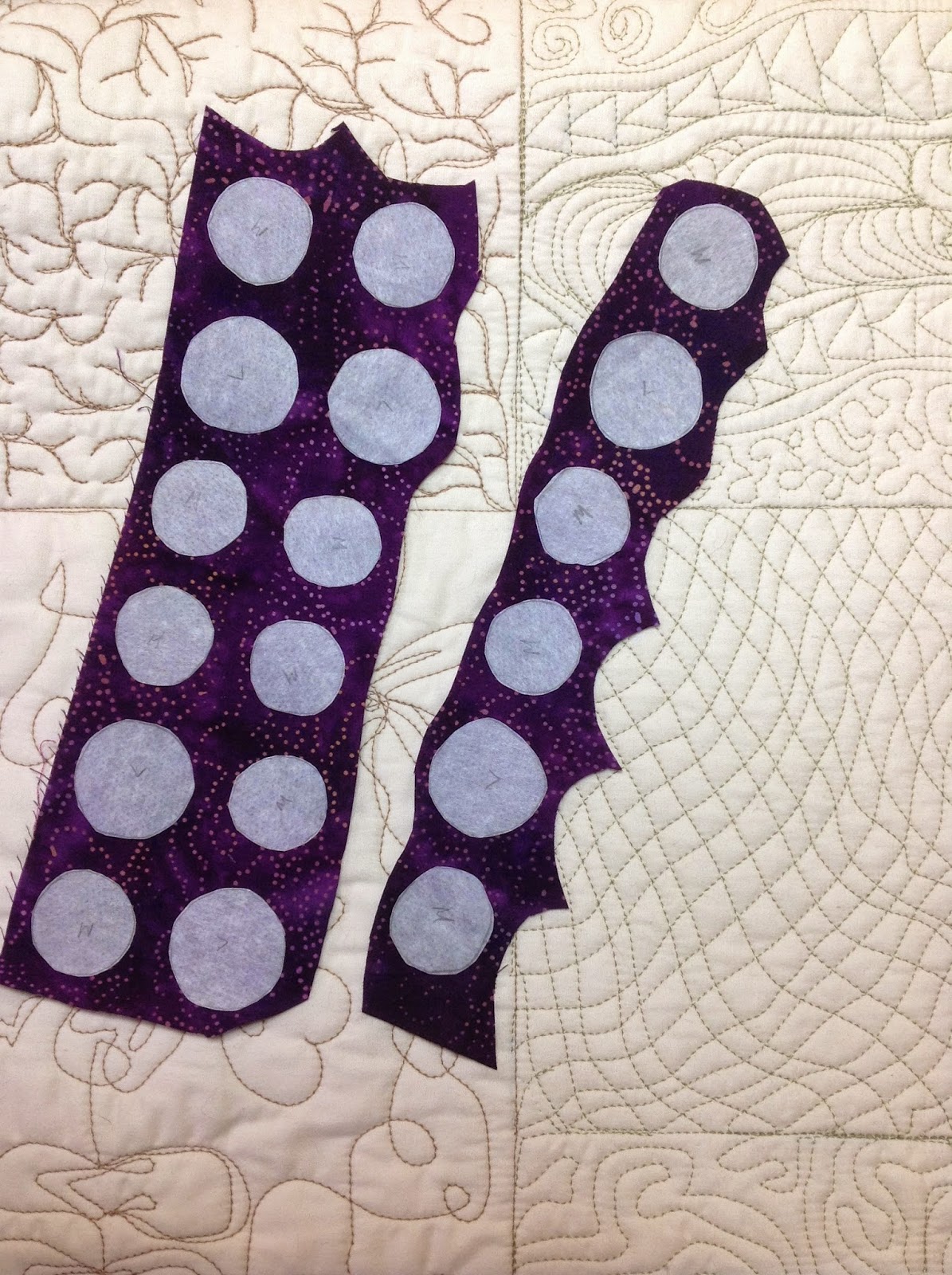 Then they get pressed onto the wrong side of the purple fabric.  From here I cut out a just-less-than 1/4" seam allowance around each one. 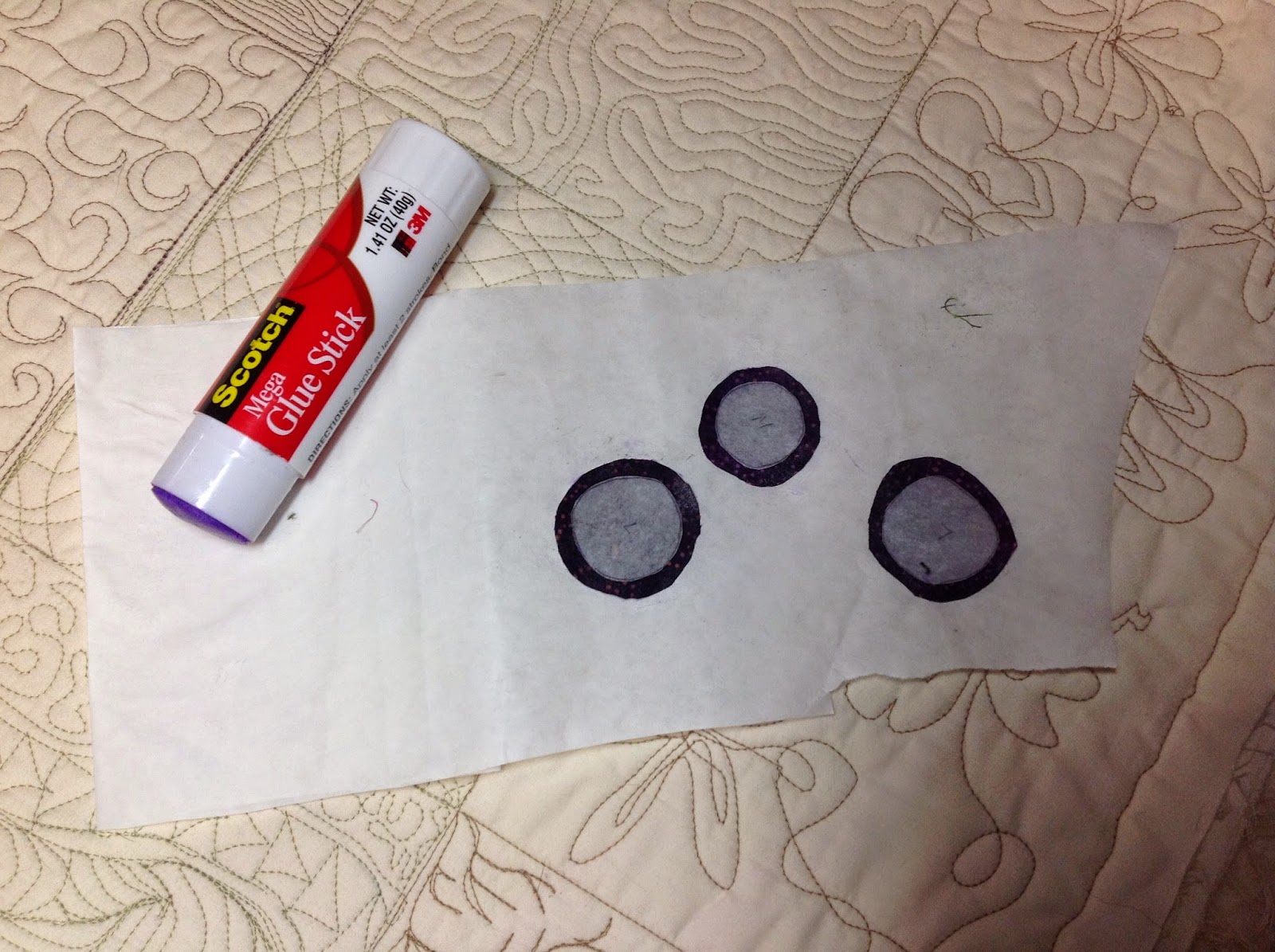 Next, I apply glue on the seam allowance and a little onto the paper edge as well. 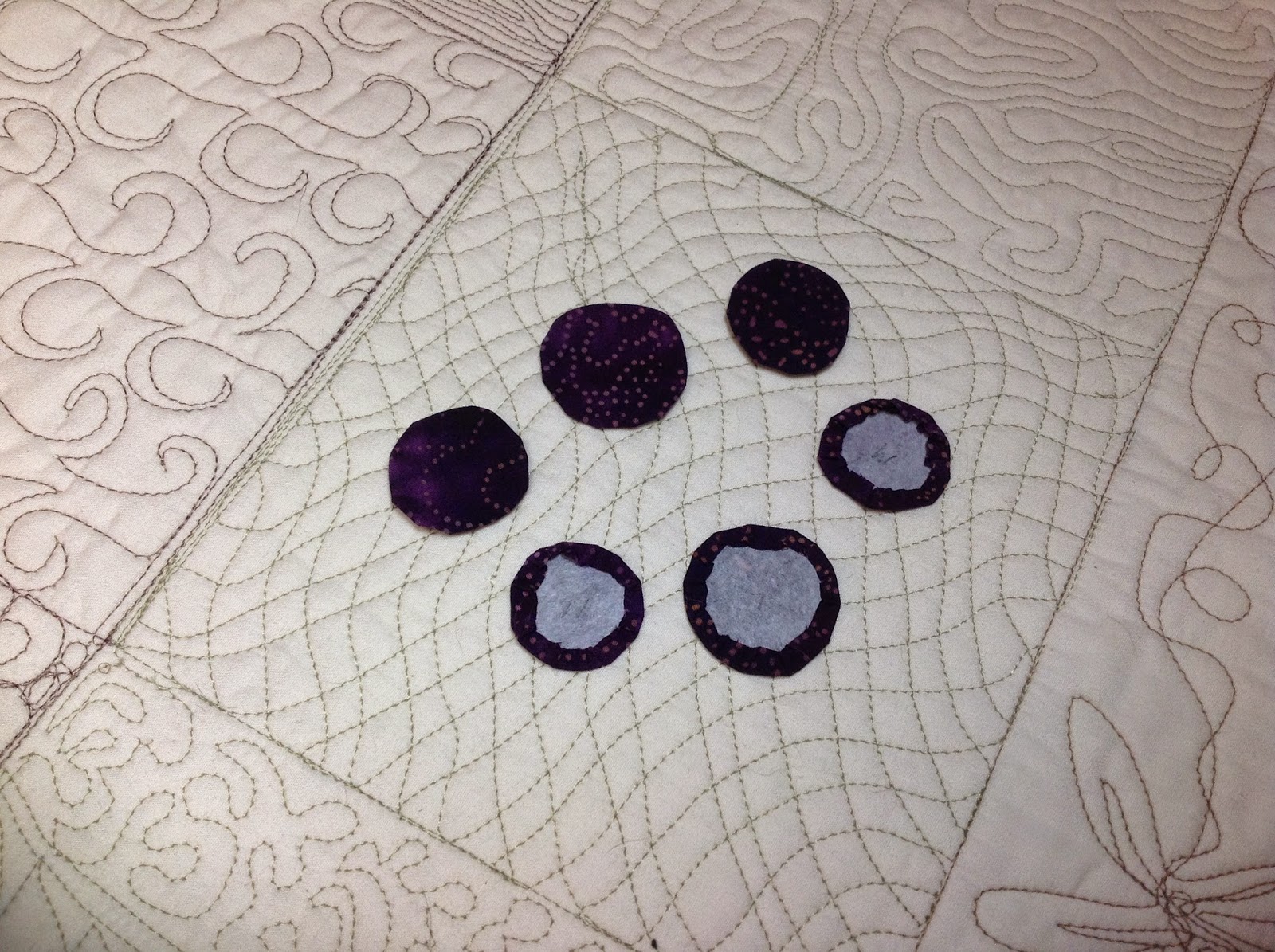 Once the glue is on, I fold the edge around the paper shape, trying to get a nice smooth sharp edge.  I then take my mini iron and press the seam allowances down.  Here you see the finished side as well as the wrong side. 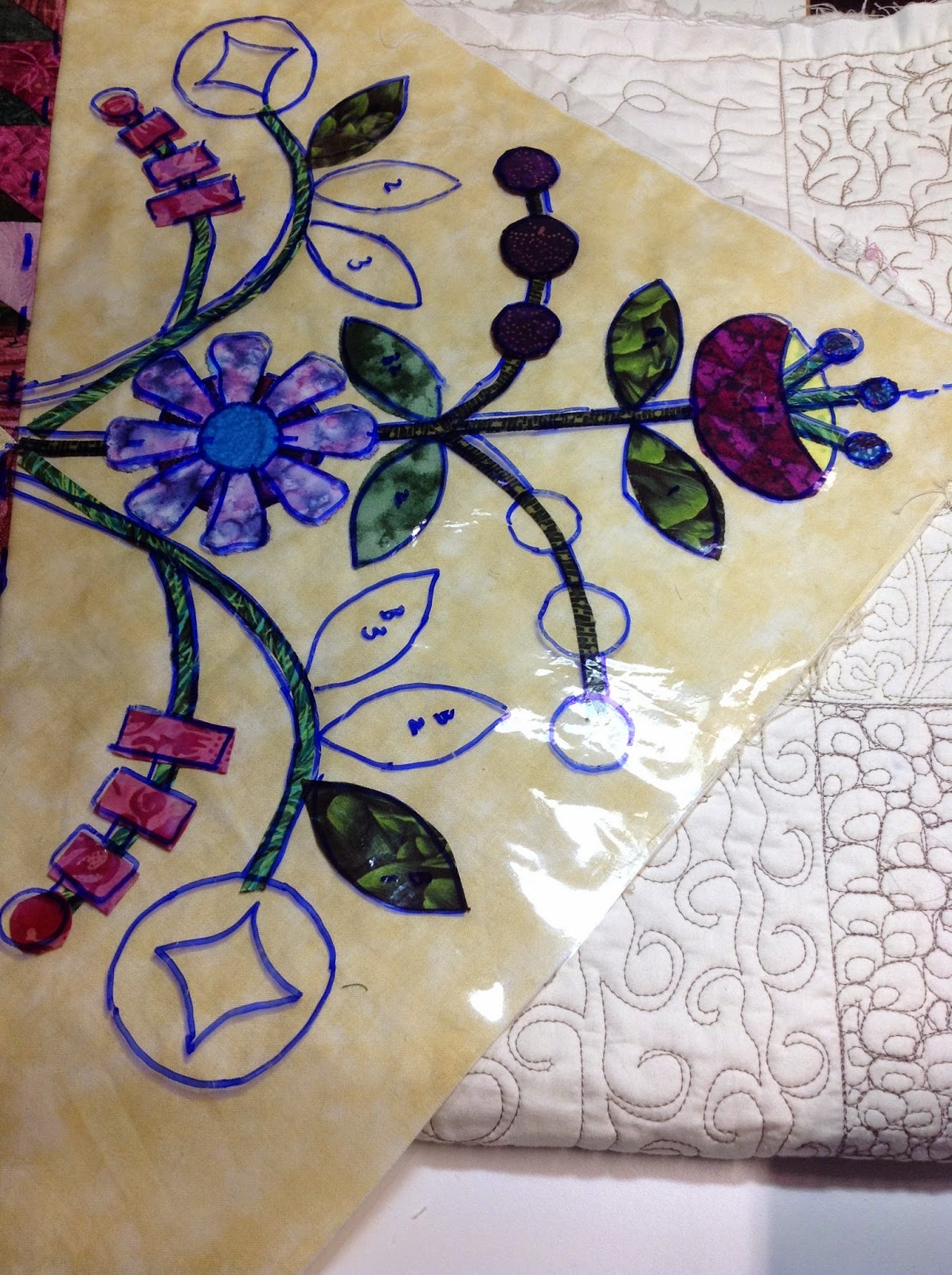 From here I place my pattern guide, which I traced with a permanent sharpie onto vinyl, onto the quadrant, sliding the pieces into their proper places.  Last, I press them down so the fusible web will hold them in place until I stitch them down.  I'm using invisible thread in a smoke colour for the majority of the pieces and a clear for the light-coloured ones.

You can see I just have a couple of leaves and two more flowers to assemble and apply and then finish stitching this second quadrant!  I think I'm beginning to see a light at the end of the tunnel!

Email ThisBlogThis!Share to TwitterShare to FacebookShare to Pinterest
Labels: appliqué, round robin