What's Wrong With this Picture

I thought this next round, "put curves on it", wouldn't be too hard.  I had a couple ideas, one of which was incorporating a sunburst (na, too much paper-piecing) and then when I drew it all out, a picture frame, curving of course, kind of came to mind.  And it looked good.   Hunted through, oh, a stack of books and magazines for inspiration as to exactly how I'd do this. 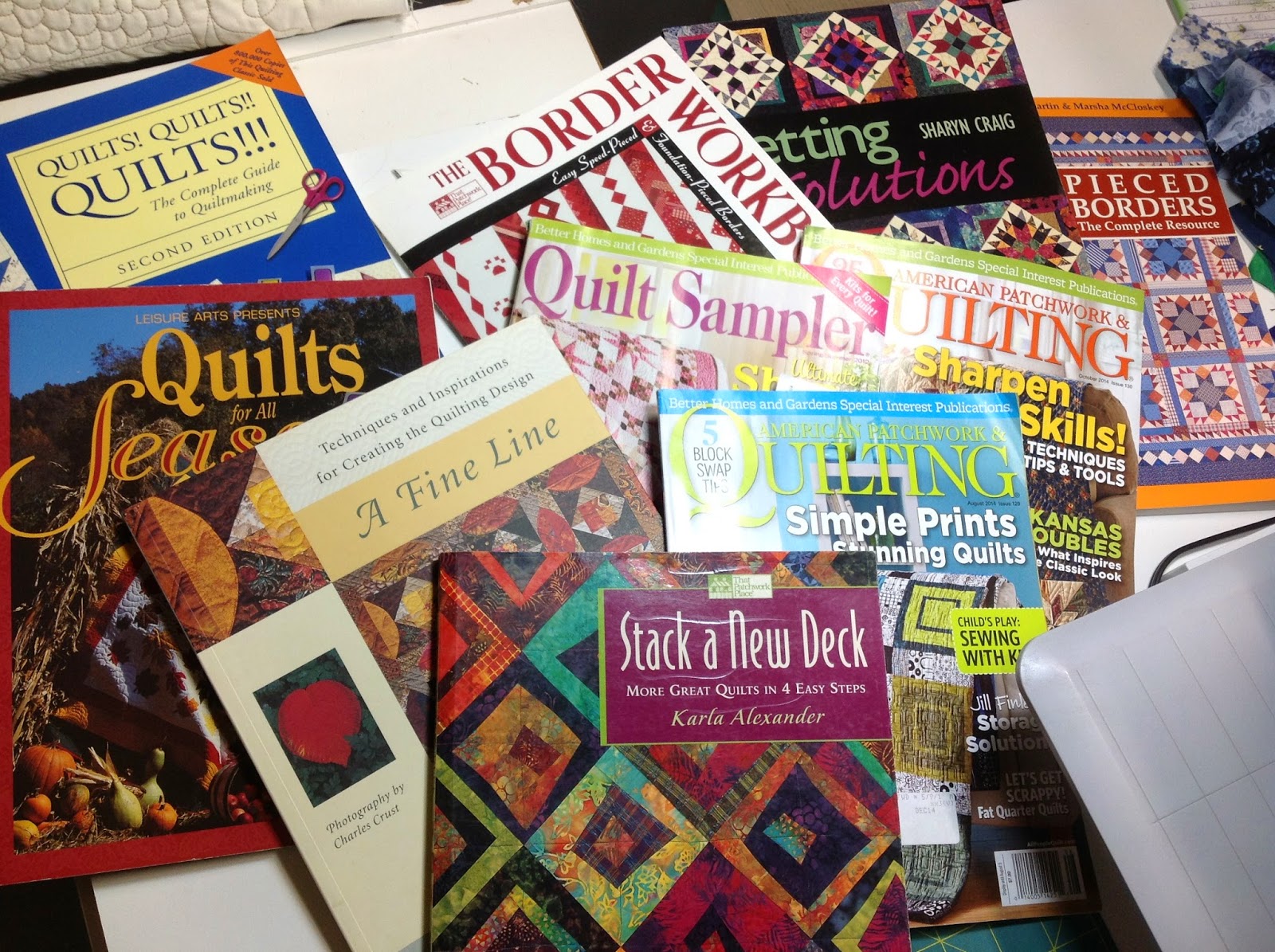 I decided I wanted to make a piano keys border here though too.  Why?  Well, first of all, I played and taught piano most of my life.  Second, I like that style of border.  Third, I don't have a lot of dark green left in the fabrics I've used so far to make it a solid border.  And finally, it echoes both the stripes as well as the flying geese rounds.  Then I remembered Karla Alexander's method for an improv-style border in Stack a New Deck.  So I used it.

It took a little longer than I anticipated.  Life was contributing to the delay as well.  At first I didn't have enough of the piano key segments, so I made some more, digging through my stash and scraps.  All of a sudden I had enough for a 5th border!! Egad.  Oh well, I will put it on the back.

But where are the curves, you ask?  This was the "face your fears" part.  Went online to see if the way I thought I would do it was, in fact, correct. It was.  Here is a good video link from Fons and Porter, and here is an article with good instructions.

I made a paper pattern the length of one side, so I could fold it in quarters to ensure the curves would be even.  I also was happy to see Fons & Porter endorse my Thanksgiving turkey method...they used a dinner plate; I used an oval serving dish!  To get the gentle curve of course!

Sewed the two sides on first.  Man, it was scary to cut into the piano keys border!  This was where I left it last night:


So this morning I figured no prob, tackle the top and bottom and 'Bob's yer uncle'.  Uh oh, the quilt has now grown by 2" on each side because of those side borders.  No problem; add 4" and you get 59.5".  Uh, so where do I put the paper border template?  On centre and add the 2" at the ends?  That didn't seem right.  I'd have too long of a rectangle at each corner.  Um... Start the paper template at the end and then fudge in the 2" over the curves on each half of the border?  I remember adjusting quilting stencils in this way; the eye doesn't notice a 1/4" - 1/2" extension or shrinkage over a gentle curve.  So this rang a bell.  So that is what I did.  And I did the most brainiac stupid thing ever: I cut both the borders at once, to "save time", "get them both identical in their curves."  Ya, right.  Or maybe not.  Look below:


Cry.  Rant.   Say bad words.  Consider adding in a corner square, and putting a seam on each "hill" curve to save this border, and shrink it accordingly.  I only have 22" left of this fabric, and I need it in the next round, because I have that round planned.  Or did.  Decide to recut 3 more 4" strips and redo this border.  I can use the 2" wide part of the unuseable one in the next round.  Yes I can.  Breathe.  Go do yoga to try to find my chi.

Found my chi.  This looks better doesn't it?  Now that mitred corner is symmetrical. 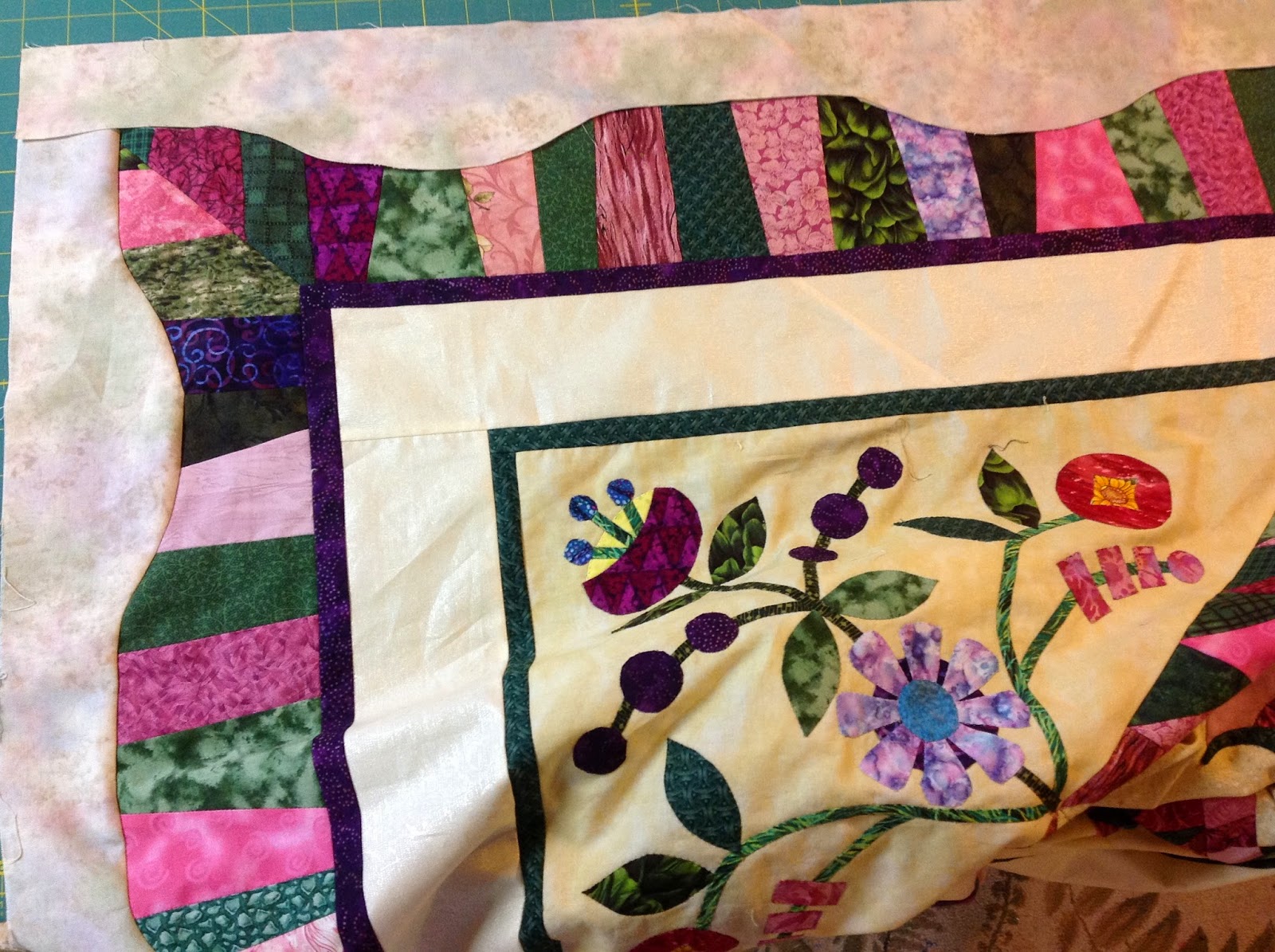 And here it is FINALLY with the curves round on. 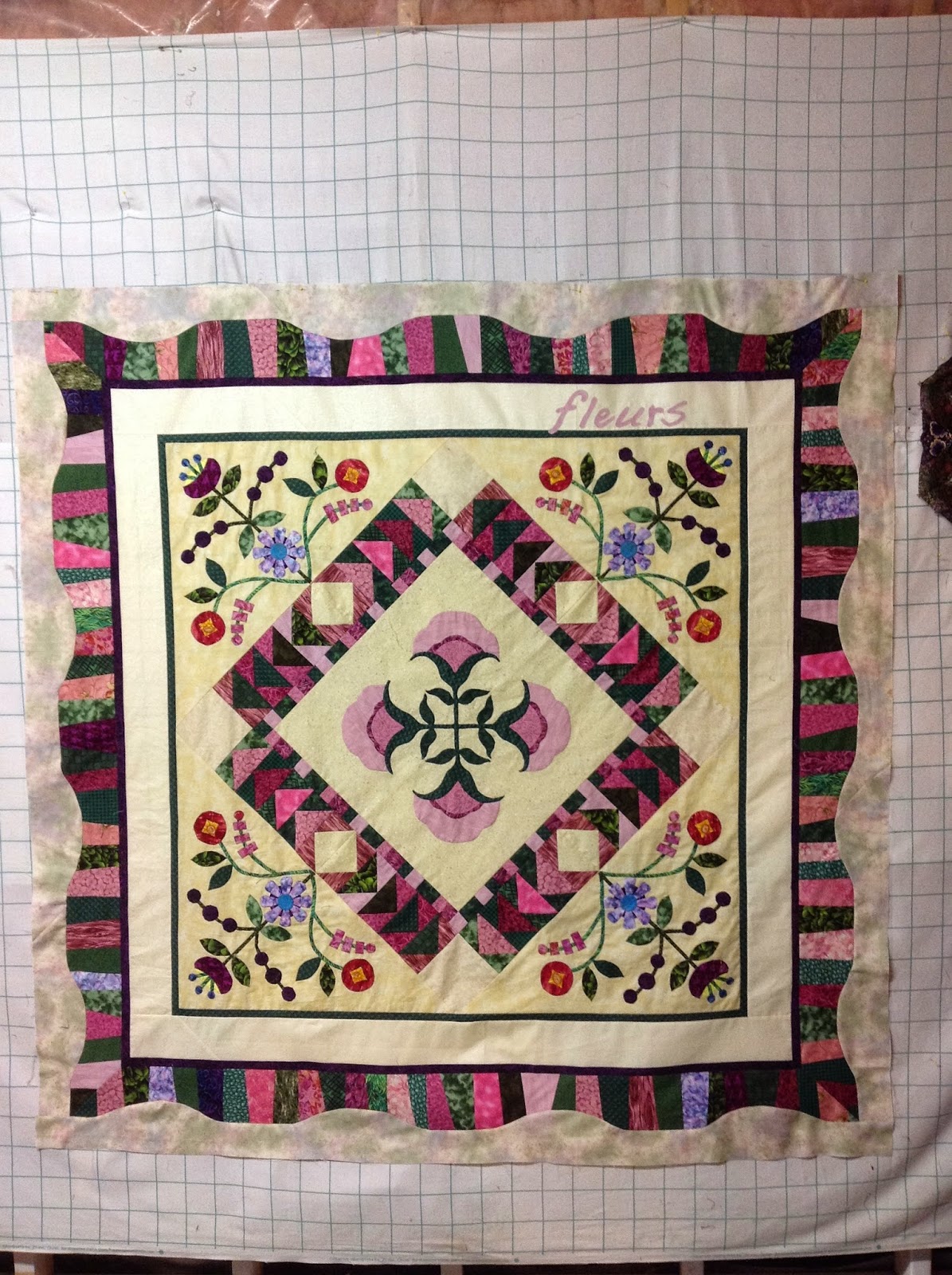 A close-up of the corner, all sewn: 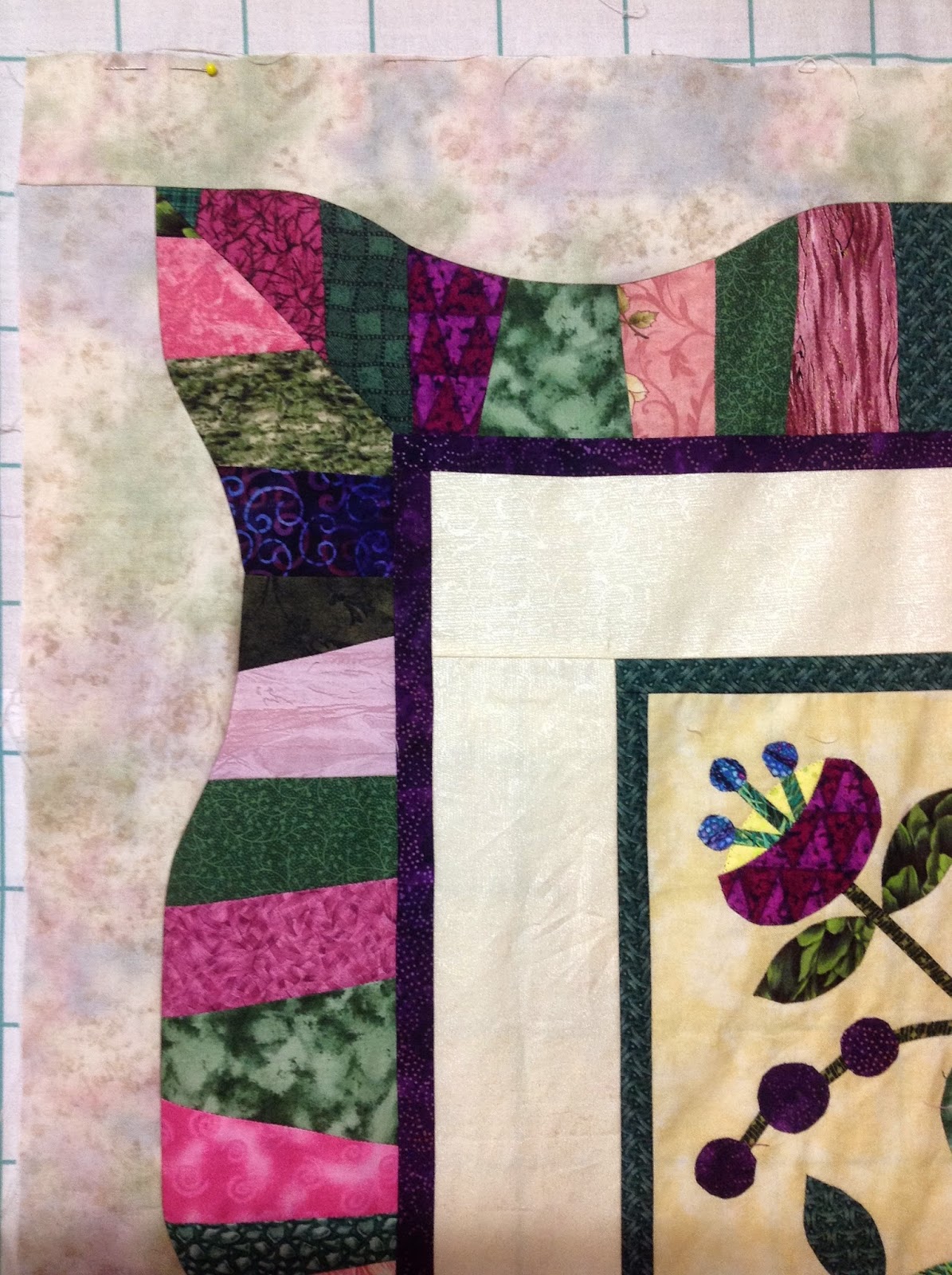 I also sewed on the actual gears Joe bought to each corner of his Gears quilt and hung it on his wall of fame corner in his garage. 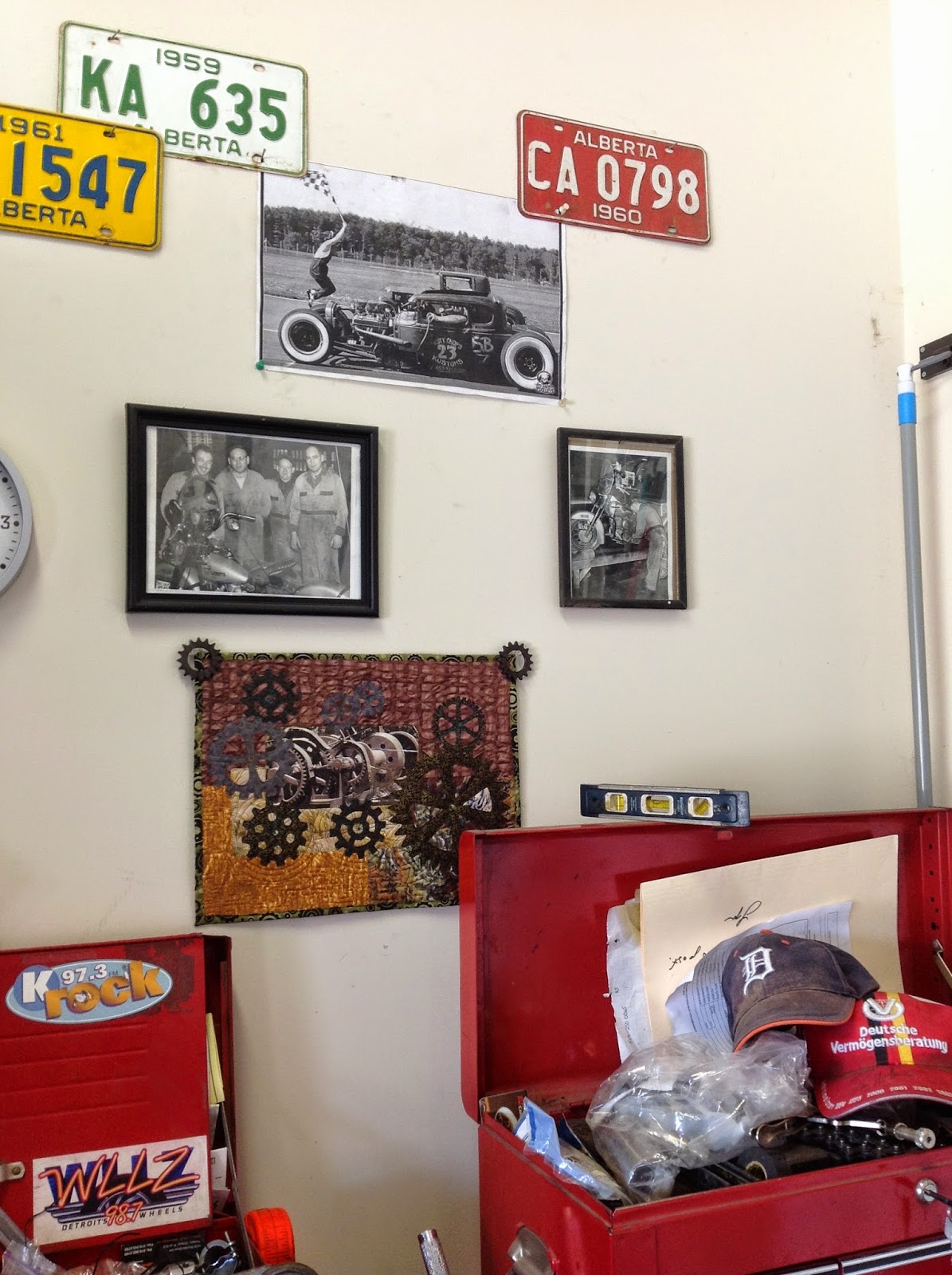 OH!  And I got two fantastic news items today, and one a few days ago:
1.  Bella won a random prize drawing in the Pets on Quilts contest in Cats on Quilts category! Thank you SO MUCH to Jennifer of the Cat Ball!!  You should check out her site, very pretty fabric balls.  For cats to go IN.  And if you have a cat, chances are you know just how much he or she loves to stuff herself into anything.  Think Maru.  If you live under a rock (hello! so do I sometimes) then click here for a video you will loooove.

2.  My LQS in Sarasota, Cotton Patch Quilt Shop, is going to be in the Fall Quilt Sampler (knew that for a while now) but their quilt is on the cover!!  Coolio.

3.  My friend, Lara, who blogs at BuzzinBumble, has just found out that a book she has been working on is going to be published by the American Quilters' Society!  Congrats, Lara!  It's a new method of "aaaack"-pliqué, so I will have to check it out and turn the way I say it in my head to "ahhh-pliqué", said with a sigh of contentment.  Normally, I don't mind appliqué, but this quilt was pretty intense.  So, I'm interested, as her method is raw-edge appliqué, whereas mine was all edge-turned, except for the "fleurs" word.

Until next round!
Posted by Sandra Walker at 10:24 PM

Email ThisBlogThis!Share to TwitterShare to FacebookShare to Pinterest
Labels: curved piecing, round robin