Although I don't know Yvonne, I have run into her work several times over the past several months of linking up at various linky parties.  When I heard from Judy at Quilt Paradigm that she was asking for blocks for two kids whose father passed away very suddenly, I thought, well this sounds like a worthy cause.  I went to her blog, and hey! found that she does Thankful Thursdays!  I wrote my first one here, thinking I had something unique and original...well, great minds think alike is what my mum always says, and she is absolutely right.  I truly believe in the idea that all beings, animals too, are linked, connected, that we can tap into a mega stream of consciousness if we only find the right frame of mind.  Anyhow, I'm not sure when Yvonne started doing Thankful Thursdays, but I will have to link up my next post.  I don't do them weekly anymore; all right, let's be honest, last week's was the first in several months!  But talk about synchronicity (another thing my mum says a lot), it was right around the time I wrote my last Thankful Thursday post that I went to Yvonne's at Quilting Jetgirl.

Yvonne's April 2 Thankful Thursday shows some of the blocks she has received, and provides links to her original posts where she explains about the project and about Mike's death, her friend, who was the kids' dad, the pilot of the Virgin Galactic mission.  This post is worth the read about a challenge quilt she created that expresses grief, yet hope in working through the aftermath of the tragedy.

The first block I made is for the girl.  Her blocks need to be in portrait orientation, 7X10" finished, and could be ocean or dance-themed.  My first thought was, no surprise, the ocean.  I went to Google and eventually with much surfing (and digressing), found this page.  I also did a second Google search for "lighthouse quilt blocks" and combined and rearranged a couple I saw there.  Got out my newsprint paper, and drew this: 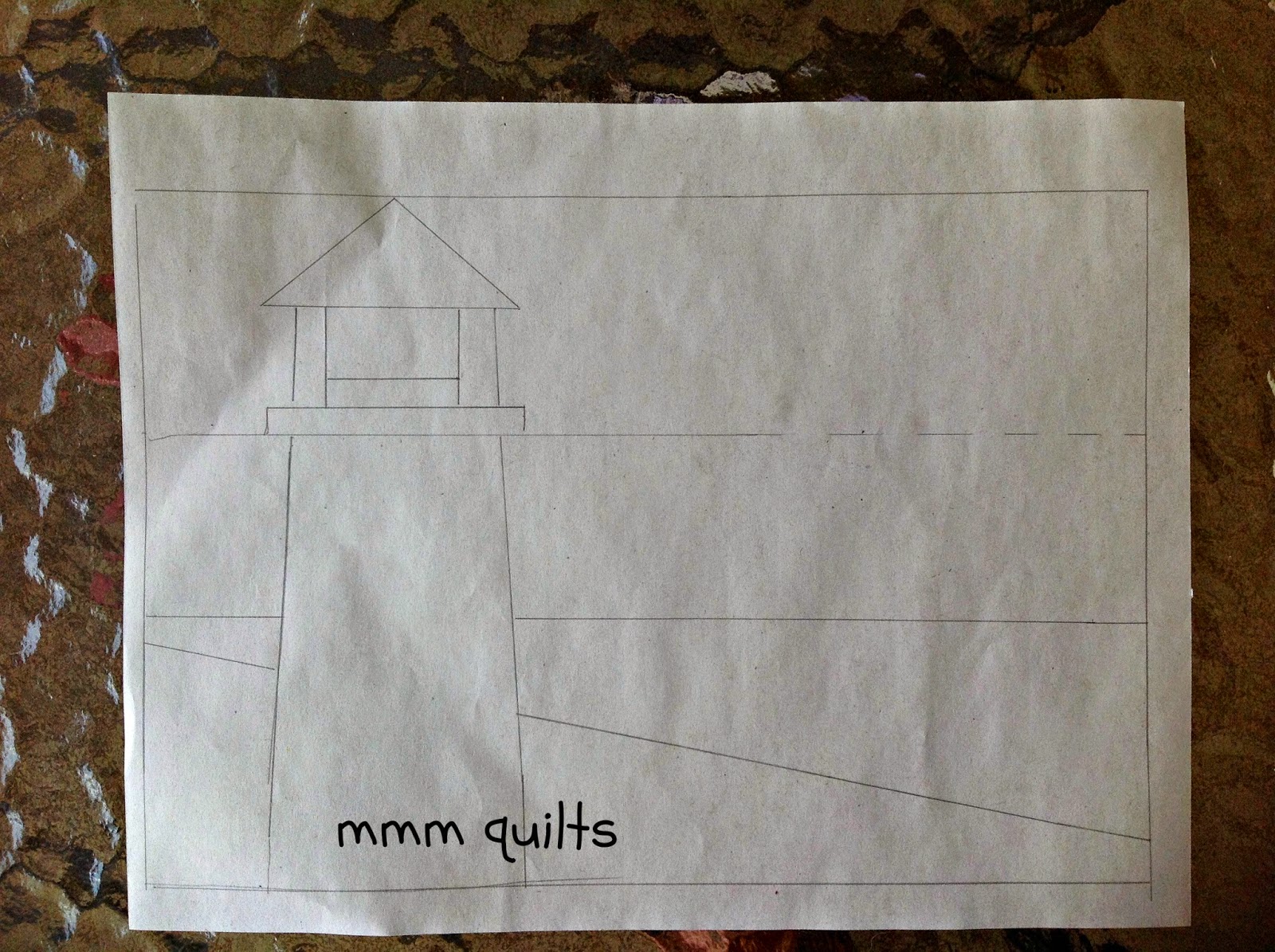 Traced it one more time, cut apart the drawing into six sections and went to work.  I am so happy that I brought a bunch of blue scraps down here to Florida, because I even had sky scraps!  And here's a thought I had while making this block:  can one have scraps of quilts one hasn't yet made?  Apparently so:  the water is fabric I just bought last week to go in my as-yet-unmade-or-designed-but-it-will-be-my-own-design Lake Erie quilt, and the sand fabric I'd bought about this time last year for the same unborn quilt!  Ergo, scraps from quilts that have yet to be made, right?!  ;-)

Here is the result, and I couldn't be happier.  Note, I resewed nearly every single seam in this block; I'd even flipped the long and short pieces of sky fabric on the top section, forgetting that pp yields a mirror image!  However, it was all worth it:

The black and white are Kona scraps from various quilts, and the blue sky Moda marbles fabric is from a Joan Statz quilt.  Like my sister, Linda, I have always loved lighthouses; an original painting hangs on the wall in our Kingsville home of 3 local lighthouses.  Moreover, in creating this block, I felt the symbolism was especially dominant:  guidance, hope, light, a safe path, peace.

On to the boy.  He would like music-themed blocks as he is learning to play the piano.  As a former piano player and teacher, I was pretty extremely excited about this subject!  I was surprised how long it took me to decide upon a design:  I drew the staff with two eighth notes on it, thinking to paper-piece it too, I drew the treble clef, thinking I could appliqué it onto a blue or music-themed background, I thought about appliquéing letters for forte (loud in Italian, but related to fort in French, meaning strong, good symbolism again)...in the end, it came to me late last night: a word, yes, but why not simply "piano", appliquéd onto a music-themed background? And why not a little improv designing?

Beautiful calligraphy-style writing comes quite naturally to me; bubble letters not that hard either...30 years a schoolteacher rears her head once again!

I drew these letters: 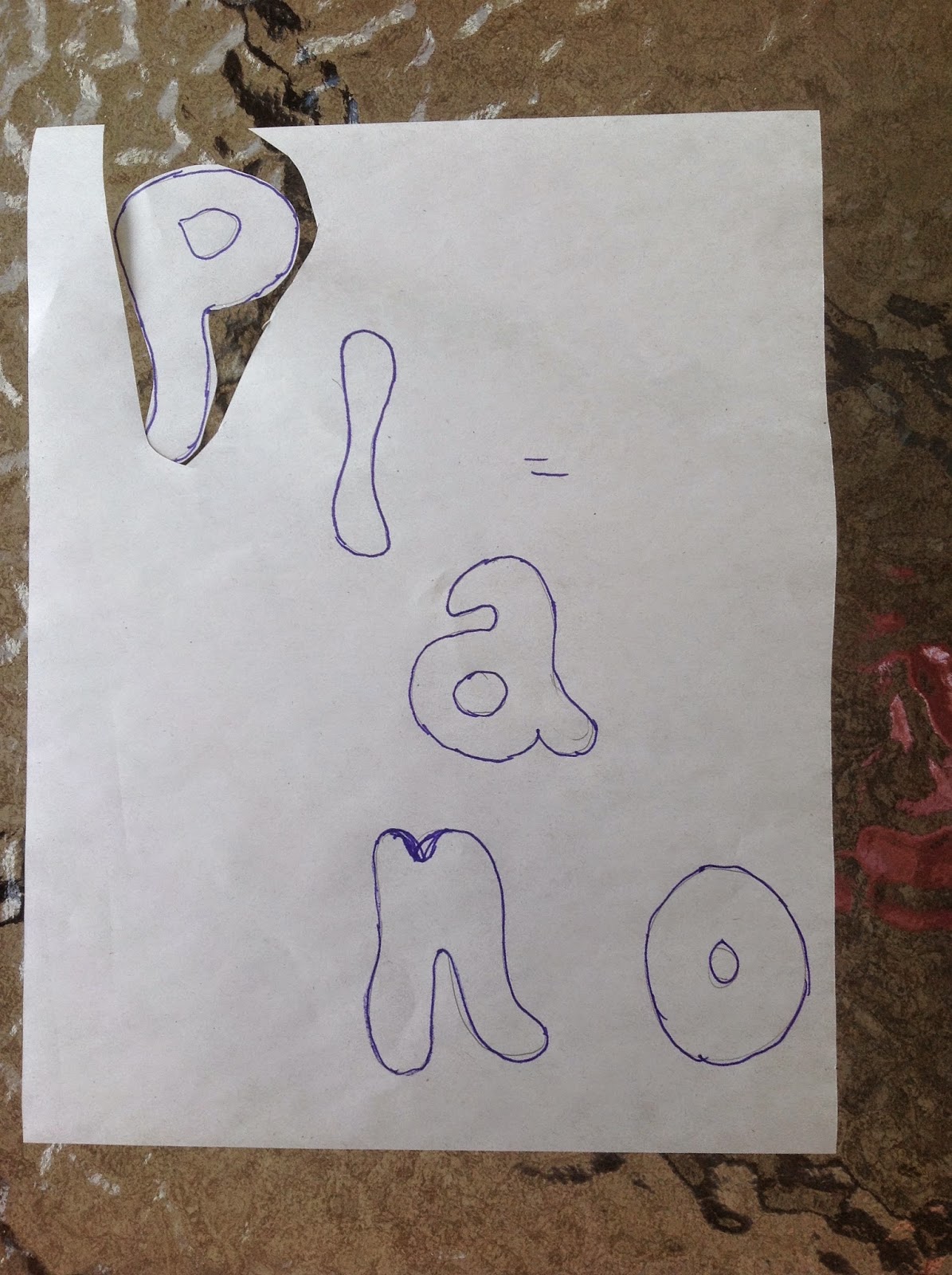 Cut out the 'P" and then realized I needed to trace them onto Steam-a-Seam.  Um then realized I needed to trace them backwards, yep I learned that the hard way!  Decided that the music fabric fat quarter destined for my Bento Box quilt (aha! another scrap from an unborn quilt) would be the ticket, cut it at 7.5X10.5" and played with the letter arrangements until I, with input from Dayna, was happy: 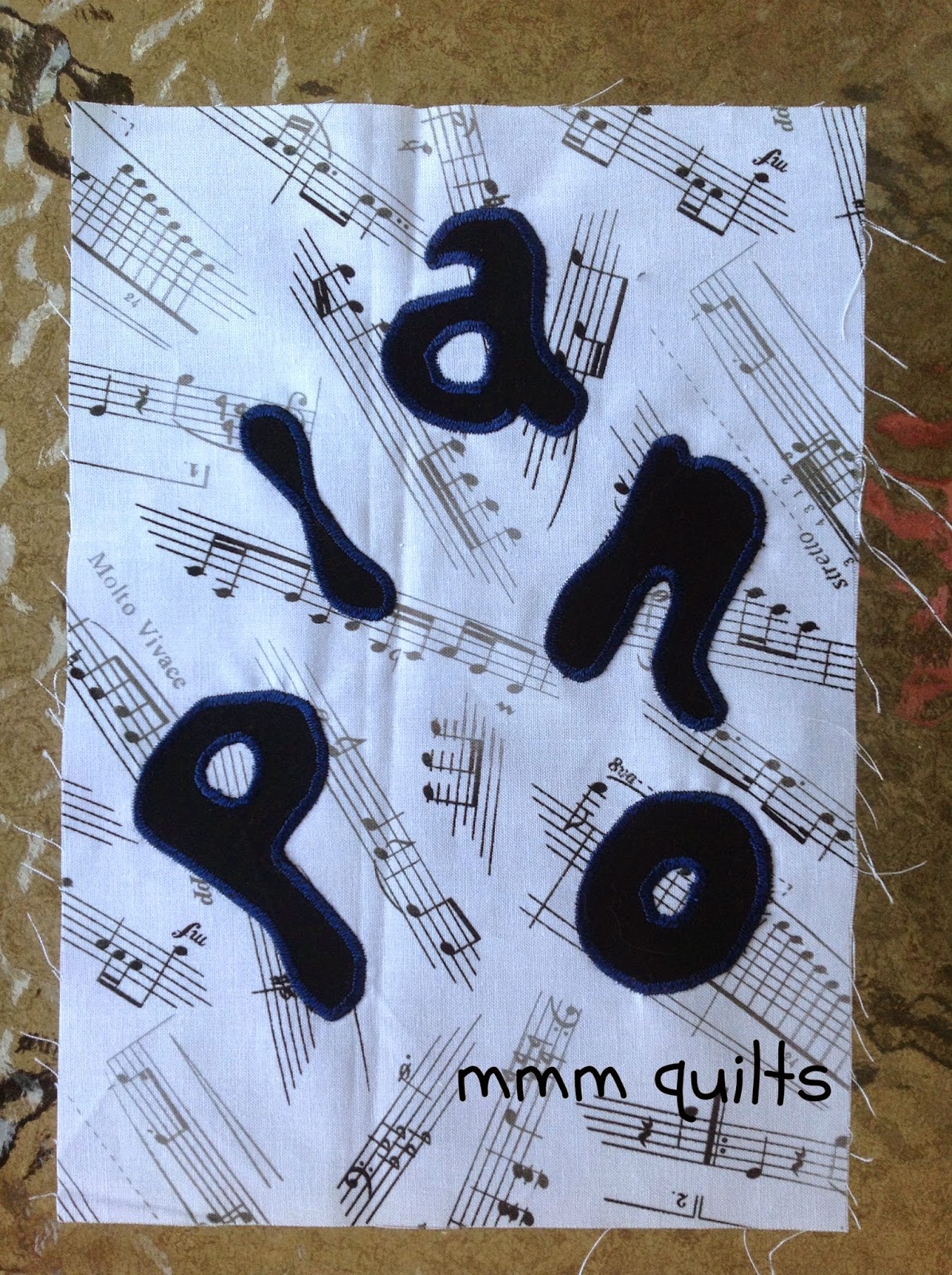 This morning I got up, pressed the letters in place, and went to work appliquéing them down.  I found a spool of Sulky Twist in royal blue and black and knew it was perfect, as the boy likes that shade as well as a light shade of blue.  Not sure how well the thread shows up in the photo, but it is a great effect in person.  I think I might appliqué a dot over the "i" though; what do you think?  It didn't bother me until I now see the photo on the computer screen... thoughts most welcome.

Again, the black is scraps, and the music fabric which I adore, is future scraps, lol!

I will be sending these off to Yvonne tomorrow; if you are interested in participating, the specs are all here in this post.

Linking up with Oh Scrap! button on sidebar.

Update:
Well, that didn't take long; did Judy's suggestion (duh) and both Joe and I, and she, said, yep.