It Started With This... 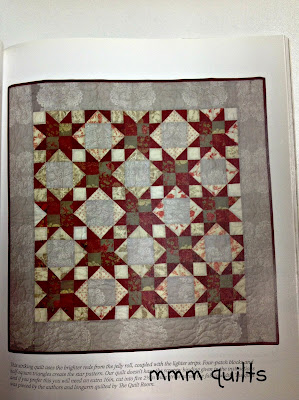 This is in Pam and Nicky Lintott's Two From One Jelly Roll Quilts, a book I took out of our guild library.  I thought it might work as my Hands2Help quilt for the Canadian charity, Because You Matter.

But I had this 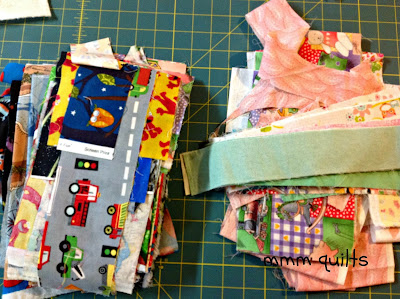 The strips on the right are left from my over-zealous cutting for Maren's quilt.  I suddenly saw blocks of strips as the star centres rather than the 4-patch.  Pulled out the graph paper, and drew this 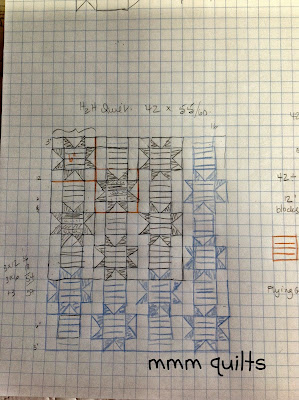 pieced, dug for some white fabric, dug out more scraps from Maren's quilt, and put this on the design wall: 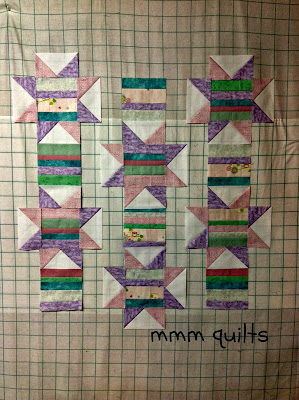 I experimented with two different squares for the flying geese method I wrote a tutorial for here.  It's rather freeing to do a quilt for charity, with no pressure.  Let's see, I thought, what would happen if I used two different colours for the squares...could I get two-coloured geese wings?

First I laid two pink squares across the background white one. 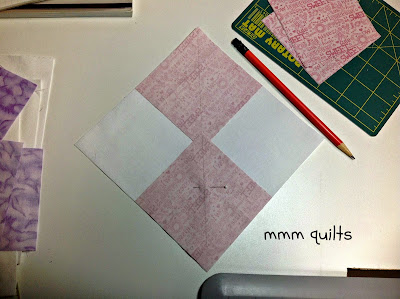 Sewed, cut, pressed as per the tutorial.  Added the purple ones 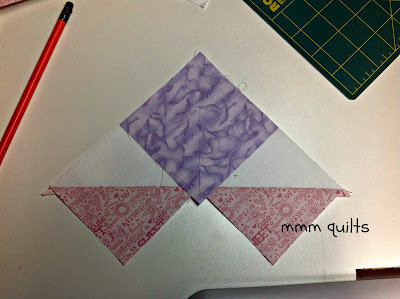 Sewed, cut, pressed and squared to this 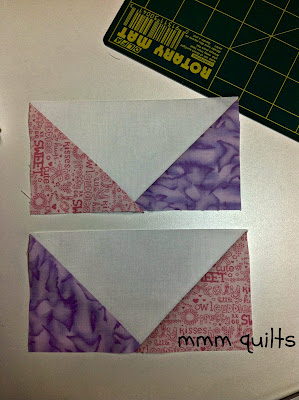 Kewl!  as my sister Linda would say/write.  It worked!  You get 2 identical pairs, so 2 with the purple on the left and the pink on the right and 2 the opposite.

I also by accident found another layout for the pieces in this quilt:
I like them both!  But if I do this arrangement, I would need to either make another column of the strip set blocks and geese, or make big borders because it's only 30" wide.  I love the diagonal movement though... What about you?  I think...hmmm, I think that will keep for another quilt as I want this one to be about 40" square, and with a 2" border it will be just that!  Perfect for a child to grab, hug, or put on her lap.
:-)

Now to remake the same pattern, but in boys' fabrics!  Remember the stacks of strips at the beginning of this post?  Those on the left are left over from Brady's  I Spy quilt. 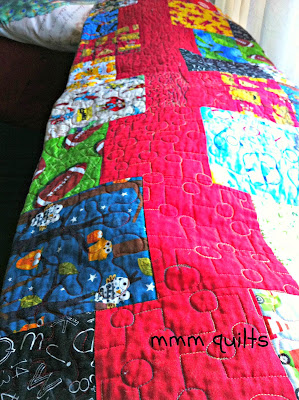 Whatever layout I choose for the girl, I will do the other layout for the boy.

Outside of a piece of cotton for the backing fabric for this first quilt which I picked up yesterday at Fabricland on sale, this is completely from scraps in my stash.  Aren't scraps a wonderful thing?

Remember to vote in the Bloggers' Quilt Festival!  I know I need to go do this asap.  Did my 3 picks for Viewers' Choice last week.  My two quilts are Gears in Art Quilts and Seashell Runner in Small Quilts.  So much talent and beauty and inspiration all abound in this twice-yearly festival!

Oh, nearly forgot:  Bella, in her diva, pose-for-the-blog-why-haven't-I-been-on-it-lately way, managed to catch my attention yesterday:
I mean, come ON!!  What cat does this?  Well, lots, I know.  If I'm cutting, she has to be on the table; if I'm pressing, she's trying hard to be allowed to stay on the pressing area; if I'm sewing, she's either trying to get on my lap (and often succeeding) or trying to wiggle into a spot behind the small of my back, or sitting on the sewing table.  I laid out the white fabric and of course, because I was cutting, she was on the cutting mat.  So I draped the fabric end over her and smoothed out the end I was cutting.  She didn't even move, loving being beneath the fabric!!  I went to the pressing side to press the squares I'd just cut, as they still had a bit of a fold in some of them, and saw she was still motionless under the fabric. So I picked up the iPad which was right beside me, said, "Bella! What are you doing you silly pussycat?" and of course up, periscope, she popped with a "mmrrow?" and held still for two photos.  You know, just to ensure I used the very best one here.
Posted by Sandra Walker at 1:36 PM